Palestinian Refugees in Diaspora and their Right of Return, Where to?

Geneva International Centre for Justice held a side event on “Palestinian Refugees in Diaspora and their Right of Return, Where to?”. The side even was organized in cooperation with the International Organization for the Elimination of All Forms of Racial Discrimination (EAFORD), and the Women’s International League for Peace & Freedom (WILPF) as well as the Palestinian Return Centre. The meeting included as speakers Majed al Zeer, General Director of the Palestinian Return Centre (PRC), Magda Qandil, Middle East Research Centre/ Polish Academy of Sciences/ Poland and Hanine Hassan, EuroMid Observer for Human Rights. 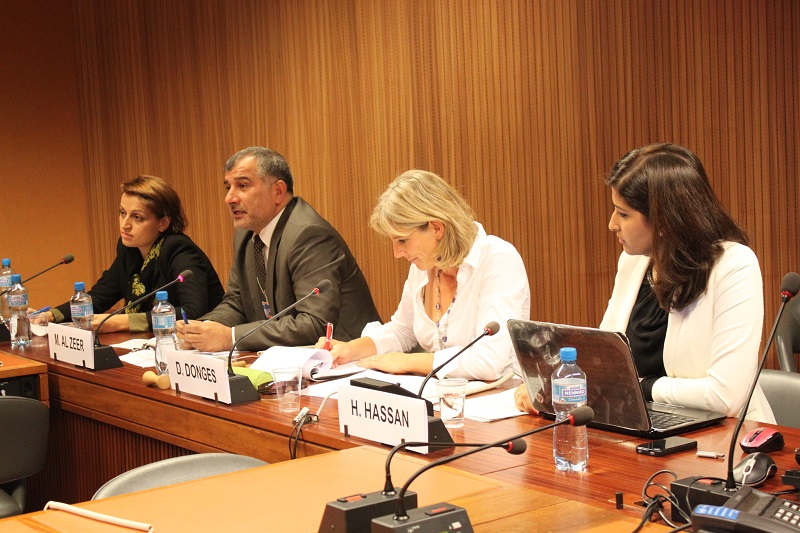 Palestinian Refugees and Right of Return (Overview of Refugees Worldwide)

In his presentation Majed al Zeer gave an overview over the legal, political and humanitarian challenges faced by the now 7 Million Palestinians refugees, who with 70% represent the most significant and important Palestinian constituency.

Al Zeer began by presenting the situation in general. Over the years many attempts were made to resolve the problem through political discussions but they proved futile. Until this day the situation of the Palestinian refugees remains as precarious as ever. One tragedy follows another, although international law, reaffirmed by various United Nations resolutions such as 194, affirms their right to protection, return and compensation. Human rights and international law however were hijacked by the ethics of power politics and political expediency. The result of this monumental failure has been an endless cycle of failed negotiations while Palestinian refugees are exposed to terrible conditions.

The situation is especially critical for the refugees in Syria, Al Zeer further explained, where due to their refugee status Palestinian refugees are uniquely exposed to human rights abuse. To this day 80% of the Palestinian population in Syria needs urgent emergency assistance. Around 2000 Palestinians have been killed and 80% are displaced and a further 60,000 have fled to neighboring Jordan and Lebanon. They are crammed into poorly equipped living facilities, have limited access to provisions. Contrary to other refugees from Syria Palestinians are offered no provisions and are kept apart and held in detention centers.

Al Zeer then addressed the crucial issue of West Bank and Gaza, the latter of which is under siege from both, Israel and Egypt. As a result there is an economic and medical crisis for 1.7 million people. Tunnels that were used for the entry of construction materials, fuel and goods have been demolished and the border closed, with severest humanitarian effects. In West Bank and Jordan Valley, Palestinian farmers and residents face daily threats due to occupation and settlements. Farmers are denied access to their land; demolitions and settler violence undermine daily living.

As a last example Al Zeer explained the situation of the Gaza refugee camps in Jordan. The camp is home to about 24,000 Palestinian refugees who left the Gaza Strip in 1968.  Most of the families living there were displaced in 1948, meaning that they have lost their homes twice in one lifetime.  The majority lives on less than $2 a day.  The Jordanian government does not actually recognize any of the people living in the refugee camp and consider them persona non grata, which means they have no access to any governmental benefits, be it social, economic or political.

Al Zeer ended his presentation by concluding that there isn’t enough time to take stock of all the difficult challenges faced by Palestinian refugees and the Palestinian people as a whole The core of the issue is the right of Palestinian refugees. It would be an offence against the principles of elemental justice if these innocent victims of the conflict were denied the right to return to their homes, while Jewish immigrants flow into Palestine. Israel continues to occupy Palestinian land and made occupation a permanent reality. A political process that is not connected to International law and human rights has absolutely no chance of success. Israel must cease its ongoing occupation of Palestine and recognize the indisputable rights of all Palestinians to return and live in Palestine.

Palestinian Refugees in Syria and Lebanon (Field report to be presented)

In her presentation Magda Quandil addressed the plight of the Palestinian refugees in Syria. She began by explaining their legal status under international law, according to which Palestine refugees, are defined as “persons whose normal place of residence was Palestine during the period 1 June 1946 to 15 May 1948, and who lost both home and means of livelihood as a result of the 1948 conflict.” In Syria there are at present 12 camps in which live 529.000 registered refugees, 80% of whom are in need of urgent assistance. About 235.000 of these refugees have been displaced within the country.

Magda Quandil then explained that the biggest Palestinian refugee camp in Syria is Yarmouk, which hosts at least one third of the Palestinian Refugees in Syria. Refugees living Yarmouk are facing an especially difficult situation. On 16 December 2013 the camp was hit by an air strike. Intensified fighting between pro-regime and anti-regime militants, shelling and sniper fire by regime forces worsened the situation. A siege started on 26 Dec 2012, which lasted until 13 July 2013. Since the beginning UNRWA had no access to the camp. The humanitarian situation is characterized by serious food and medicine shortages, no doctors nor paramedics, no electricity, no mobile and internet network coverage for the last few months.

Finally Magda Quandil gave an overview over those challenges Palestinian refugees face when they attempt to flee Syria. Iraq was never an option since Palestinians started being expelled from there in 2006.  Jordan officially closed its border to PRS in January 2013, Lebanon de facto closed its border in August 2013, without any formal announcement, Turkey requires visas, which Palestinian refugees are not able to obtain, Egypt also requires visa and makes residency permits impossible.

To conclude, Magda Quandil said, Palestinian refugees in Syria cannot access any safe territory with neighboring countries de facto closing their borders to them. Those who manage to flee cannot access protection within the countries of the region, thus they try to reach Europe in an irregular and extremely dangerous. The international community should recognize the existing protection gap and countries not covered by UNRWA mandate UNHCR should not be prevented by the national authorities from conducting its protection obligations towards Palestinian refugees as per the Article 1D of the 1951 Refugee Convention.

The Right to Return - Legal Aspects

As the last speaker of the panel, Ms Hanine Hassan, gave an overview over the legal aspects of the Palestinian refugee issue.

She began by saying that even in the fourth generation Palestinian refugees are more determined and more educated than ever to return to their homeland. No amount of borders, wars, attacks, ethnic cleansing, roadblocks, different ID-cards and different car plates’ will refrain them from demanding their right to their land.

In a first step she explained the historical aspects, when in order for Jews to colonize the lands of the Palestinians and establish an exclusivist Jewish state, the natives were driven out of the country and more than 500 Palestinian villages were depopulated and later destroyed to prevent the return of the refugees. In some districts not one Palestinian village was left standing. Homes were taken by force and the population ethnically cleansed and displaced. The discrimination against Palestinian people is reflected in the fact that Israel decreed a “Law of Return for Jews” in 1950, which gave Jews to right to colonize Palestine. Palestinians however were denied the same right.

The basis for the right of return in international law, Ms Hassan further  described, is hard to refute and can be found in UN Resolutions, International Human Rights Law, International Humanitarian Law, Law of State Succession (Customary International Law) and International Criminal Law but despite these the displacement went on, especially after 1967, when more Palestinians have been displaced, house demolition, revocation of residency rights in Jerusalem and construction of illegal Jewish settlements, as well as the Wall and its associated regime. In 2008 around 65,000 Palestinians in West Bank communities face imminent displacement.

In a next step Ms. Hassan presented three ‘durable solutions’ for resolving refugee crises the international community has established: Return, property restitution and compensation. International best practice insists that refugees be offered their choice of a solution. A rights-based approach to assistance and protection therefore requires that refugees are consulted and given a right to participate in the design and implementation of national and international interventions. In the case of Palestinian refugees Resolution 194 affirms that the refugees should choose their preferred solution and it obligates those who have chosen to return to their homes to live at peace with their neighbors.

To conclude Ms. Hassan highlighted the Feasibility of Return. Since 1990 alone, Israel has absorbed over a million new immigrants from the former Soviet Union. Also the destruction of refugee housing is not an issue, since in other parts of this world, such as Kosovo and Bosnina this has not prevented the return of refugees. In each of these cases, the international community supported the right of refugees and displaced persons to return. Estimated that in 90% of the communities from which Palestinian refugees originate inside Israel, there is no conflict with existing built-up Jewish communities. Therefore  the return of Palestinian refugees would not result in the displacement of the existing Jewish population from their homes and communities.

At the end of the side-event the audience was given the opportunity to address questions to the panelists, which ended in a fruitful discussion about the perspectives that might be given to the refugees.