Geneva International Centre for Justice in collaboration with the International Organization for the Elimination of All Forms of Racial Discrimination, The Palestinian Return Centre and Youth Against Settlement, organised a side event during the 23rd session of the UN Human Rights Council. The speakers at the meeting were Dr. Richard Falk: UN Special Rapporteur on the Situation in Palestine, Mr. Issa Amro: Human Rights Defender in Hebron/Palestine and Mr. Nasim Ahmed: Senior Researcher at the Palestinian Return Centre. 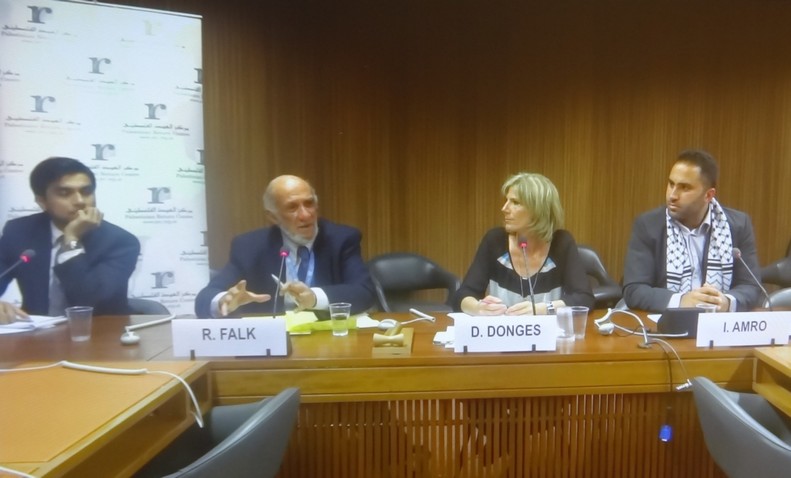 Dr. Richard Falk: the Palestinian tragedy is more than a tragedy of land; and the Palestinian conflict is not only a regional problem, but a problem of people above all. It is the most important symbolic sign of struggle of our time.

Mr. Amro began by speaking about the problem of land-taking in Palestine and Hebron. Land-taking in Palestine is achieved by forced displacement, settler violence and the Israeli military forces (IOF). Under forced displacement one finds cases of house demolitions; deportation; high taxes; the apartheid wall; refusal of building permits; no water supply; failure in the provision of services; and violence by settlers and the IOF.

Mr. Amro presented the case of the city of Hebron as an example of the situation in Palestine as a whole. Hebron, one of the oldest cities in Palestine, is home to approximately 200,000 Palestinians. About 600 settlers occupy the heart of the city. In Hebron, large numbers of businesses and housing units have been closed by the Israelis. Only fifty-eight percent of apartments are inhabited and seventy-seven percent of businesses have been closed. Once vibrant and commercial squares and markets are now non-existent and Palestinians are banned from entering many of those areas.

According to Mr. Amro and his experience, violence by Israeli settlers is widespread and includes: the Price Tag Campaign, symbolic violence, physical violence, shooting Palestinians, burning land and houses, stealing Palestinian crops, cutting trees, threats against life, and the Price Tag Campaign (PTC). The PTC is a well organized campaign of violence and terror against Palestinians. Members attack Palestinian homes without any consequences for their actions and are actually backed by the Israeli government. Mr. Amro informed attendees that when it comes to physical violence, the Israeli police does not interfere on behalf of the Palestinians who are being victimized; they allow Israelis to carry out intimidation and violence. Palestinians are ruled by military law, leaving them without important legal protections, while Israelis are governed by Israeli civil law.

Mr. Amro introduced Breaking the Silence, an Israeli NGO works to unveil the truth of violence against Palestinians by disseminating testimonies by Israeli soldiers, their experience and what they have witnessed. Soldiers have confirmed the attacks on Palestinians by settlers and affirm that they are not allowed to interfere, being told that they are there to protect the settlers.

Mr. Amro closed with the fact that in Palestine in general, and in Hebron in particular, the police and soldiers confiscate land by military orders; arbitrarily arrest and detain human rights defenders; carry out nocturnal home invasions and raids; protect settlers committing violence and theft against Palestinians; and commit harassment, physical and verbal violence.

According to Mr. Ahmed, no other group of refugees is marginalized to the extent that Palestinians are. In Lebanon at the moment, if it were not for the Palestinian community there, Palestinian refugees would starve because there is no budget to accommodate them. Palestinian families have been housing and feeding refugees; some now having up to thirty people living in their homes.

To close, Mr. Ahmed informed participants that there is currently an effort by the United States to block funding to American Near East Refugee Aid (ANERA), which provides funding for Palestinian refugees and that an effort must be made to fight this.

Dr. Falk thanked Mr. Ahmed and Mr. Amro for their presentations and for their work. He added that he was humbled to be on a panel with someone like Mr. Amro who dedicates his life to defending human rights in the region.  Dr. Falk expressed that the city of Hebron is so important because it is the extreme that exemplifies the entire occupation. The situation there may be a bit more exaggerated, he said, but the quality is not different from what is happening all over Palestine.

Dr. Falk informed attendees that a serious predicament with regards to the Palestinian issue is the question of established law. International Humanitarian Law was conceived to address temporary situations, but an occupation that goes on for decades and decades is a completely different type of situation, he said. IHL looks to protect those that are explicitly victimized, but the essence of prolonged occupation is that the entire population is affected, not just those explicitly victimized. There is something systemic about prolonged occupation that affects human development in profound ways, he added. An occupation that persists for this long has the features to become a permanent reality. Prolonged occupation has now transformed to a permanent set of realities not accommodated by Human Rights Law or International Humanitarian Law. This is a reality that has short and long term realities for the international community.

Dr. Falk concluded his presentation by affirming his belief that the Israeli occupation is an occupation of a foreign country and that Israel never conceived this occupation to be temporary or reversed. He added that Israel is just playing games by speaking of possible peace agreements and that it is trying to denationalize the Palestinian identity. Dr. Falk states that this is clear from the way that Israel refers to Palestinians. It refers to them as Arabs, not Palestinians and thus in a way saying that they do not belong in Palestine, but in other Arab countries. He added that on numerous occasions Israel has made the point that Arab countries should absorb the Palestinian population.

Palestinian Minister of Labor Majdalanit, who was at the United Nations heading the Palestinian delegation at the International Organization of Labor General Assembly meeting and who attended the Human Rights in Palestine event, expressed his gratitude to the panel and in particular to Dr. Falk for his work as Special Rapporteur on Palestine and his most recent report. Minister Majdalani also conveyed his gratitude on behalf of the Palestinian people, President Mahmoud Abbas, and the entire Palestinian government.

Minister Majdalani added that he and his government regret the attacks and accusations that Dr. Falk has undergone by certain NGOs while undertaking his mandate. He reiterated that President Abbas and the Palestinian government will continue to cooperate with Dr. Falk in any way possible in order for him to continue to fulfill his mandate, that he will continue to receive their unrelenting support for his continuation as Special Rapporteur on Palestine and that he is always welcome in Palestine.