On 26 June 2013, GICJ submitted a follow-up appeal to UN Special Procedures, including the United Nations SR on human rights defenders, the SR on the rights to freedom of peaceful assembly, the SR on Palestine, and the Working Group on Arbitrary Detention on behalf of Sireen Khaled Rashed Sawafta (Sireen Khudiri), HR-defender and activist in Palestine. 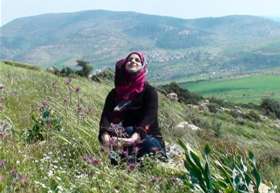 On June 26, 2013 GICJ submitted an urgent appeal on behalf of Sireen Khalid, HR defender and activist in Palestine following her arbitrary arrest and transfer to Al Jalameh Prison, near Haifa, Israel on May 14, 2013. To the day of the appeal is still in prison.

Sireen Khudiri is a school teacher and nonviolent Palestinian activist. She studied computer science at the Open University in Tubas. For more than 3 years she participated in the campaign of the Jordan Valley against violence. She writes about human rights violations by the Israeli occupation authorities, such as home demolitions, water confiscation, raids of houses and schools, restrictions of freedom of movement and arbitrary arrests.

Human Rights Defenders in Palestine are frequently targeted by the Israeli authorities which places them at grave risk and present serious obstructions in every aspect of their work, with restrictions on the freedom of movement and assembly, administrative detentions and other forms of harassment, intimidation and humiliation that have rendered their situation absolutely incompatible with international norms and standards of human rights.

On Tuesday 14 May 2013, around 15.00h pm. Sireen’s car is stopped by Israeli forces at a checkpoint between Nablus and Tubas in the West Bank. After brief interrogation she was detained. Ever since, she is held in custody. One day later Israeli forces raided Sireen’s family home. Twenty-five army jeeps entered the town, twenty officers raided her house and over hundred soldiers remained in the street. The entire family, children included, was brought into one room whilst their home was ransacked.

Tubas is located in Area A, which according to Oslo agreements is under full Palestinian control. Israeli civilians and military are prohibited from entering the area. Sireen’s arrest was in breach of this agreement, which sparked protests all over Tubas the following morning. Israeli forces met these protests with extreme violence, fire tear gas and sound grenades.

The Fourth Geneva Convention prohibits the forcible transfers of persons to the territory of the Occupying Power. In breach of this convention Sireen was transferred to Al Jalameh Prison, near Haifa, Israel. Lawyers that tried to visit her were refused the entry.

On Wednesday May 22, 2013 a first hearing was held. Sireen was denied access to family members and lawyer. Her brother later reported that Sireen was charged with internet activism, notably the creation of a Facebook page, that might harm the security of Israel. The Israeli military court decided to extend the detention.

Ever since Sireen’s detention has been extended without any conviction. During this time Sireen Khaled has spent 22 days in solitary confinement, was body searched with the windows and doors open wide and denied access to family and lawyer for most of the time. Her family is in constant worry. In a desperate call for justice the family asked the international community for help.

GICJ considers the arrest of Sireen as a clear breach of international law, notably the IV Geneva Conventions and the International Covenant on Civil and Political Rights, demanding that “no one shall be arbitrarily deprived of his life”.

GICJ further considers the permanent extension of detention as a clear act of discrimination, aimed at deterring Sireen from addressing human rights violations carried in the occupied Palestinian Territories. Sireen is committed to nonviolent protest, mainly through writing. Any attempts to stop her activities must be seen as a serious violation of the freedom of expression, symbolic for the general and illegal policy of repression against human rights defenders in the oPt.

On behalf of Sireen GICJ urgently requests the Special Rapporteur to intervene with the Israeli authorities and request them to no longer arbitrarily deprive Sireen of her liberty. A continuous extension of detention without any charge or fair trial is illegal and cannot be accepted. GICJ also asked the SR to remind the Israeli authorities as the Occupying power of Palestine of their obligations under international law to protect human rights defenders and assure that their right to freedom of expression is guaranteed.