The United Nations have proclaimed 2014 as the International Year of Solidarity with the Palestinian People. Under this motto GICJ delivered several oral statements during the 25th session of the Human Rights Council and invited speakers from the ground, calling on the international community to sustain its own credibility by taking prompt and effective action. 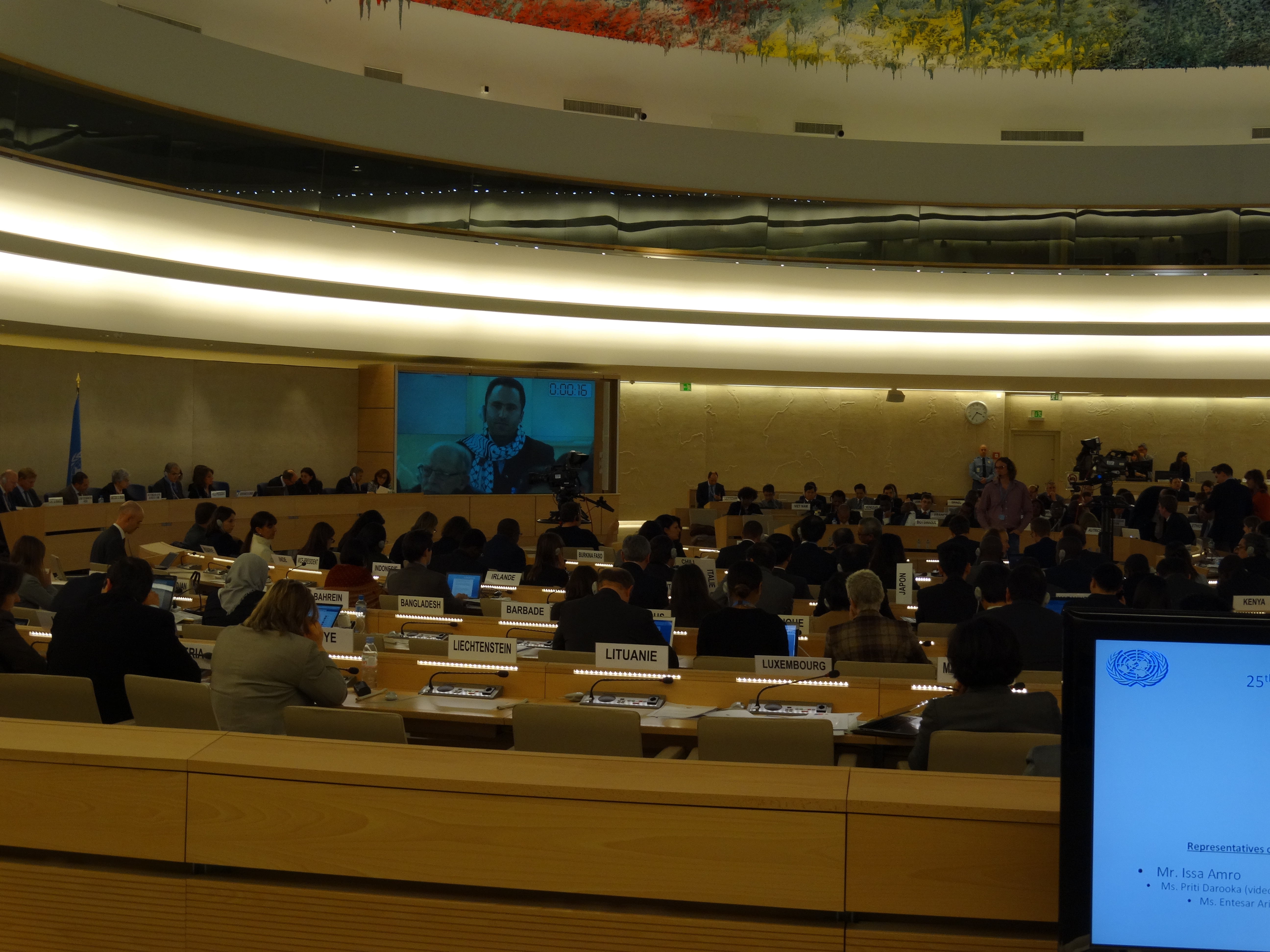 On 6 March 2014 Issa Amro, human rights Defender and coordinator of Youth Against Settlements in Hebron/ Palestine participated in the High Level Segment of the Human Rights Council, addressing issues such as occupation and settlements, the importance of item 7 and the situation of human rights defenders working in the field. At the occasion of the UN international year of solidarity with the Palestinian people, he exposed the human rights violation occuring under occupation and called on the international community not to cease in its efforts and let itself influenced by political pressure.

Full text of the statement

I am Issa Amro from Palestine. I am honoured to adress you in my personal capacity as representative of a civil society dedicated to the implementation of all UN resolutions on Palestine and the full observance of human rights and international humanitarian law under occupation.

I am particularly pleased to be able to take part in this part of the Human Rights Council at the time when we are observing the International Year of Solidarity with the Palestinian People in 2014. I trust that you will all, as peace loving states, do your utmost to make this year a turning point in pressuring the occupying power to end its illegal occupation.

I come from the city of Hebron in Palestine where the palestinians are suffering from aparthied , discrimiantion and displacement. I wish in this context to take the opportunity to express my thanks to professor Richard Falk and the other Special Procedures of the Council who have protested against my arrests and mistreatment, because I participated in peaceful protests against the illegal settlements. And defending Human Rights.

For the victims of such grave breaches of international Humanitarian law and Human Rights, the engagement by the Special Rapporteurs is a small but very important relief that must be strengthened and not undermined by any compromises to an occupying power.In this regards I hope from the coumcil to continue protecting Human Rights defenders around the world ,who often work under conditions that place them at grave risk in every aspect of thier work.

We are deeply concerned about the boycott of Item 7 on Palestinian rights during the recent two sessions of the Council by a group of countries that was instituted to comfort the occupying power and encourage it to end its boycott of the UPR. I wish to remind the Members of the Council that they agreed to keep the question of human rights in Palestine on their agenda until the illegal occupation is ended. I appeal to all countries and regional groups to participate constructively in the discusion under Item 7 at this session of the Council.

I also appeal to the Council to sustain its own credibility by naming at this session a Special Rapporteur on the question of Human Rights in the occupied Palestinian territories who is up to the function due to his or her expertise about Palestine and the applicable international law.

Finally, I urge the Council to ensure the prompt and effective implementation of the conclusions of its international fact finding mission on the settlements. These illegal settlements are strangling the life blood from Palestine. Please continue to support our legitimate Right to self-determination and statehood by your prompt and effective actions.

Human rights situation in Palestine and other occupied Palestinian territories

On Monday 24 March 2014 GICJ delivered an oral statement during the Interactive Dialogue with the Special Rapporteur on the occupied Palestinian territories, Richard Falk, who presented his latest report to the Human Rights Council after his term came to an end at this session. GICJ thanked the Special Rapporteur for the outstanding work throughout his mandate and expressed the NGOs deepest concern in view of the ongoing expansion of illegal settlements.

Full text of the statement

This is a joint staement by EAFORD with Geneva International Centre for Justice and Youth Against Settlements.

Our NGOs thank the Special Rapporteur for the outstanding work throughout his mandate and his excellent report, in which he clearly addresses the issues at stake. We regret that the government concerned did not cooperate with his mandate and that attempts have been undertaken to defame his character rather than addressing the problem at hand.

Mr Special Rapporteur, as you underline in your report, the exploding expansion of settlements in the oPT have resulted in a system of apartheid, racial segregation and systematic oppression, which affects Palestinian human rights on all levels. It is especially alarming that such constructions have risen by 123 percent in 2013 with roughly 10,000 new settlement units being constructed since the beginning of the peace talks, which totally questions the seriousness of these talks.

We are particularly concerned that the Israeli Supreme court rulings are often also serving the political agenda and trying to legitimize illegal settlements. One example is the recent decision on the Rajabi house in Hebron. The building was disputed since 2007, when a group of settlers stormed the newly constructed Palestinian house, claiming its ownership. Although it was found that the purchase documents were forged, it was ruled on 11 March 2014 that the rights to House will be given to the settlers, against the will of its owner.

The decision will have the same impact as other settlements described in your report, such as new restrictions of movement, additional road closures and increased cases of settler violence in addition to the already tensed situation. It may finally lead to a total closure of the area to Palestinians including the cutting off of neighborhoods, the closing of more shops and increasing pressure on Palestinians to abandon the area as is the case with Shuhada Street and its peripheries.

Statement delivered during the General Debate

On 24 March 2014 GICJ delivered a second statement under agenda item 7, Human rights situation in Palestine and other occupied Palestinian territories. GICJ remind the Council of its special responsibility in ending the ongoing human rights violations against Palestinians and called on the Council to assume its responsibility and take immediate and effective action instead of making concessions in view of the persistent and systematic Human Rights violations committed by the occupying power.

This is a joint staement by EAFORD with Geneva International Centre for Justice and Youth Against Settlements.

Mr. President, Palestinians have been living under a belligerent occupation for decades now. As the Occupying Power, Israel owes the Palestinian civilians protection as provided under the Geneva Convention, yet so far it has persistently and systematically violated these provisions.

Contrary to the official self-portrayal of democracy, the occupying power has so far continued a systematic policy of apartheid, characterized by dispossession, settler violence, heavy restrictions of movement and deprivation of Palestinian socio-economic rights, which continue to take place while the international community is standing aside and slowly starts to consider some sanctions. Such a delay goes essentially at the expense of the Palestinians, who are losing their faith in the international community and the significance of those uncountable statements and resolutions that have been issued so far.

Although the seriousness of situation is well known, it has taken a new turn with attempts of the occupying power to undermine agenda item 7 on this Council’s agenda in a bargaining process that seems to be supported by an entire group of countries who abstain from the discussions on the item in clear contravention of their obligation. We wish to remind this Council that the international community bears a special responsibility in ending the ongoing human rights violations against Palestinians since the adoption of the UN partition plan, and that any weakness in holding Israel accountable for its persistent noncooperation will have long lasting consequences, including encouraging other Countries to boycott this Council in exchange for political rewards.

Mr President, as we celebrate the international year of solidarity with the Palestinian people, Palestinians find themselves in a race against the clock. Their struggle for self-determination and statehood is constantly undermined by the occupying power, which is playing for time in order to expand its settlements and annex a maximum of Palestinian land at an unprecedented haste against all international outcries. We call on this Council to assume its responsibility, not to leave them alone in their struggle and take effective action instead of making concessions.

Statements delivered during the closing of the Human Rights Council

On 28 March 2014 GICJ delivered the last statement ot the 25th session of the Human Rights Council. The statement reminded the International Community of the importance to uphold the fundamental principle of the universality of Human Rights and expressed the NGOs deepest concern in view of ongoing Human Rights Violations under the pretext of combating terrorism in Iraq, the Council's failure to hold the responsible for the invasion accountable, the lack of action in view of the persistent lack of cooperation Israel's and in this regard called on the Council to remain consistent in its judgments, committed to the enforcement of justice and vigilant in the pursuit of the truth.

This is a joint statement by EAFORD with a number of NGOs.

As this session comes to an end our NGOs would like to express our respect for the important work, and reiterate our full cooperation with this body. As the High Commissioner outlined in her opening statement, the universality of human rights is one of the fundamental principles of international relations. All together we must work towards this end and not let ourselves be influenced by power, influence or interests.

Our NGOs are deeply concerned that some countries are still getting away with impunity for their human rights violations under the pretext of combating terrorism, as it is the case for Iraq, whose government is fighting a war against its own civilians which has resulted in one of the biggest displacement crisis since the illegal invasion in 2003. We are equally concerned about the lack of accountability for the consequences of the invasion itself, which violated the fundamental norms of international law and shattered the country’s socio-economic situation on all levels.

A serious matter of deep concern remains the deficiency to address the issue of self-determination, as well as the persistent lack of cooperation of Israel with this Council, whose return to the UPR was undermined by a political bargaining process, including efforts to suppress standing agenda item 7. In including Israel in their regional group the members of the WEOG now bear a particular responsibility in pressing Israel to end its longstanding colonial and racist policy, which has resulted in persistent and grave human rights violations.

Finally, we are also deeply concerned about the postponement of the appointment of the mandate holders. We wish to reemphasize that the choice has to be made in accordance with the criteria set out in the IB package and not based on political considerations.

Mr President, the application of double standard in addressing human rights violations profoundly affects the credibility of the commitment of those who want to be at the forefront of the struggle for Human Rights. In this sense we call on this Council to remain consistent in its judgments, committed to the enforcement of justice and vigilant in the pursuit of the truth.

Palestinian refugees are the indigenous population of Palestine, who following the 1948 declaration of the State of Israel were expelled or left as a result of the conflict. The dispossession and expulsion continued during the 1967 war until this day.

The full report can be found here

The plight of Iraqi women