Punishing people for the misdeeds of others clearly violates international law

Geneva International Centre sent an urgent appeal to several UN Special Procedures to express its concern regarding the imminent threat of demolition of three Palestinian family houses related to two suspects in the kidnapping and killing of three Israeli teens in the West Bank, as well as against Husam Ali Al Qawasmeh, who was not named as a suspect in the killing but was arrested for being member of the extended Qwasmeh family and member of Hamas few days ago. A total of 39 people, men, women and children, will be affected. 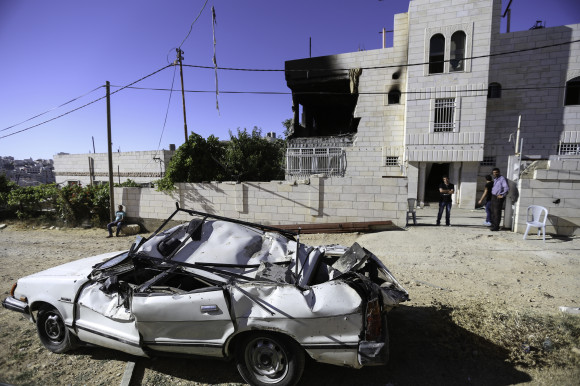 On 12 June 2014 three Israeli teenagers Eyal Yifrach, Naftali Fraenkel, and Gil-Ad Shaer went missing from an illegal settlement inside the occupied Palestinian territories. Israel responded to the kidnapping by conducting frantic house-to-house searches throughout the West Bank, particularly in Hebron. The boys' dead bodies were found 18 days later (on 30 June 2014) later in Halhul, near Hebron. They appeared to have been shot to death soon after the abduction.

Ever since the disappearance of the three teenagers the families of the suspects have been the declared target for the alleged participation of their siblings in the disappearance of the three teenagers. This was although the Israeli authorities did at no point present any evidence to back their assertion that Hamas or the two named suspects were responsible for the teens’ abductions and murders.

Abu Aysha’s father said Israeli forces had raided his home eight times. “They have searched every item of the house, every centimetre of the house," he said, including a sheep pen outside the home. "They have turned the whole house upside down, but they did not find anything." Seven family members were arrested, including two other sons.

The search operation in the West Bank was part of a broader campaign against members of Hamas in general and the Qwasmeh family in particular. This was confirmed when an Israeli government official stated to Reuters that Israel was looking to use the search as a pretext for a wider crackdown on Hamas and was also looking at legal aspects of deporting West Bank Hamas leaders to Gaza.

The violent assaults against the families of the suspects worsened after 30 June 2014, when the boy’s dead bodies were finally discovered. In the evening of Monday 30 June 2014 into the morning of July 1st Israeli Defense Forces raided the homes of Amar Abu Aisha and Marwan Qawasmeh in the city of Hebron.

At approximately 12:00 am, soldiers set up explosives in both homes, detonating them after the families were evacuated. Amar Abu Aisha’s father was arrested four days before and two of his sons were arrested fourteen days before.

A video of the attacks can be seen here

Although the damage done to the family houses was already unparallel and the suffering of the families unspeakable on 1 July 2014 Jewish settlers living in Hebron went a step further and demanded to expel the entire Qwasmeh Clan from Hebron to Gaza.

The extended Qwasmeh clan had a long history of violent terror attacks, they claimed, and was an “incubator for terrorism”. There is no way this murder could be without response, they demanded. Their demands were backed by The Jewish Press, which added: In Gaza, the Qwasmeh Clan would likely receive a hero’s welcome. Expulsion to Syria would be a far better choice.

Following such demands, on 15 July 2014, Israeli forces declared their intention to demolish entirely the houses of the two main suspects in the kidnapping and killing of three Israeli youth.

In the night of July 15/ 16, 2014 the IDF raided the two houses of the Qawasmeh (4 families, 16 people) and Abu Eisheh families (4 families, 16 people) and delivered demolition orders. In addition to that the family of Husam Ali Al Qawasmeh (1 family, 8 people), who was not named as a suspect in the killing but was arrested few days ago for being member of Hamas, received demolition order.

All together 39 people will be affected. The families were given only until 10:00 AM on Friday, July 18, 2014, to object to the decision. They were told to address their objection to the Head of the Israeli Defense Forces (IDF), Judea and Samaria Division. The head of this Division draws his power to apply the sanction of seizing, sealing or demolishing a house from Regulation 119 of the 1945 Defence Regulations. 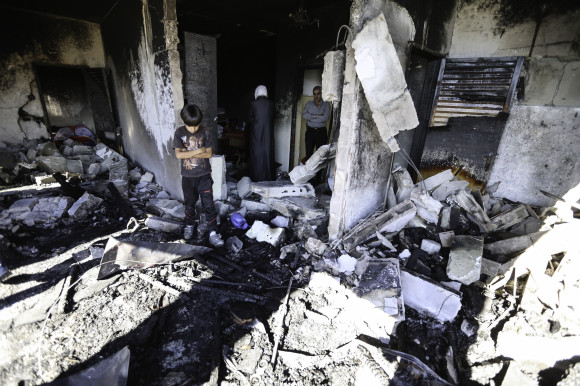 GICJ believes that Regulation 119 contravenes several central provisions in the Geneva Convention (IV) relative to the Protection of Civilian Persons in time of war, as Article 33 prohibits collective punishment and reprisals against protected persons and their property, and Article 53 of the convention prohibits the occupying power from destroying houses and property.

In addition, GICJ holds that Regulation 119 contravenes Article 50 of The Hague Regulations concerning the Laws and Customs of War on Land (1907) which prohibits the use of collective punishment, and Article 43 thereof, which prohibits damage and destruction of property.

GICJ concluded that even if the arguably claimed purpose of the demolition is deterrence, it actually harms innocents and therefore, when examined against the outcome, constitutes collective punishment. The act of house demolitions violates the very core of human dignity. As a person’s dignity is severely injured when he/she is thrown out of his/her home and remains without shelter.

The severe affront to dignity stems also from the fact that a person’s home is not just a material structure, but also a place to which a person usually has an emotional attachment to, a place that contains spiritual possessions and memories.

This policy of collective punishment clearly violates the fundamental rules of international law and contravenes the basic customary moral standards by punishing people for the misdeeds of others.

In this sens GICJ called on the UN special Procedures to