In light of recent developments in Jerusalem and in particular the mounting tension and violence at Al Aqsa, GICJ in cooperation with Qudsona Organisation for Human Rights, International Forum for Democracy and Human Rights, Meezaan Association for Human Rights and Union of Arab Jurists, organised a side event at the United Nations on wednesday 30 September 2015 to facilitate a focused discussion on the ongoing violations against the fundamental rights of the Palestinian people. This timely event coincided with the day the Palestinian flag was raised at UN headquarters in solidarity with the Palestinian people.

The distinguished panellists of this event were: Mr Omer Khamisi, from the Meezan Association for Human Rights; Mr Issa Amro, OHCHR human rights defender of the year in Palestine 2009; Dr. Durgham Saif, from the Qudsona Organisation of Human Rights and Mr. Toby Cadman, from the International Forum of Democracy and Human Rights. The event was moderated by Ms. Daniela Donges, President of the Scales for Justice organisation.

The panellists discussed in depth the situation on the ground in  Jerusalem, drawing our attention to the systemic harassment of Muslims, Israel’s severe and abusive deportation policy, the ongoing legal dead ends Palestinians face before Israeli courts and the potential of international legal frameworks going forward. The panellists illustrated the violations of Palestinian rights with harrowing and first-hand videos, images and accounts. A short film sharing the testimonies of victims of deportation was also prepared for viewing at this event.

Our first speaker, Palestinian lawyer and human rights defender Mr. Omer Khamisi, gave a moving and powerful presentation highlighting the increasing aggression of Israeli security forces towards Palestinians in Jerusalem. Omer highlighted recent violations perpetrated by Israeli forces and illustrated the multi-faceted nature of abuse towards Palestinians who are affected physically, mentally, religiously and culturally. The recent intensification of violence and harassment at al-Aqsa mosque was a key concern and Omer explained how Muslims are routinely prevented from their prayer and religious study within the al-Aqsa Mosque compound, being forced into the surrounding streets and markets. 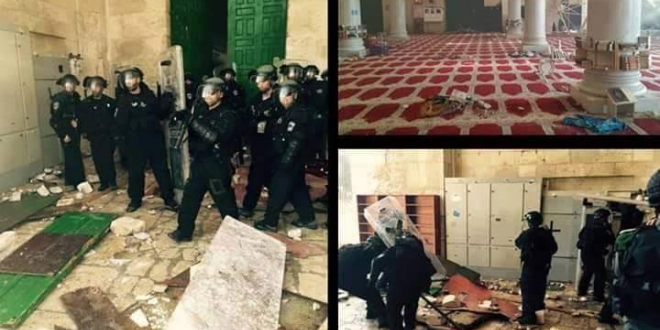 The number and length of checkpoints and walls around East Jerusalem have grown in recent months, further amplifying the harassment of Palestinian people attempting to access the mosque. Palestinians are forced to show identity cards and age limits have been placed on those allowed to enter al-Aqsa. Omer described the difficulty that lawyers have defending Palestinian rights in Jerusalem and gave multiple accounts of his organisation’s past and present legal cases, providing photos and videos depicting the victims and their abuse.  His photos and videos evidenced the use of stun grenades in the mosque, and the harassment of journalists near the mosque and the terrible consequences of the severe and punishing deportation policy for victims and their families.

Human rights defender, Mr. Issa Amro further elaborated on the brutal reality of the forced migration/deportation policy. Issa described how the systematic deportation of Palestinians from their land which begun after occupation continues in full force to this day. Issa drew our attention to the reality of life for Palestinians in East Jerusalem, who are subject to ethnic cleansing and forced displacement, high taxes and no services. The forced migration from Jerusalem constitutes just one element of the systematic process of changes being made by Israeli authorities to the history and demographic reality of Jerusalem. Israel's grip on East Jerusalem has intensified recently as the city council approved the replacing of 30 original Palestinian neighbourhood street names with new Hebrew alternatives, in an attempt to de-Arabize and Judaize East Jerusalem.
Poignantly, Issa noted that the continued escalation of Israeli aggression at Al-Aqsa in addition to the punitive restrictions on Palestinians trying to access the mosque and the isolation of the west bank from Jerusalem may very possibly lead to a third intifada.
Personally, Issa, with his green ID card, has not been allowed to enter East Jerusalem. Even during Ramadhan when restrictions were said to have been lifted, he was still unable to enter. He likened the intensifying restrictions in East Jerusalem and the treatment of Palestinians trying to enter al-Aqsa to the Israeli takeover of Hebron after the 1994 massacre at the Ibrahimi mosque. 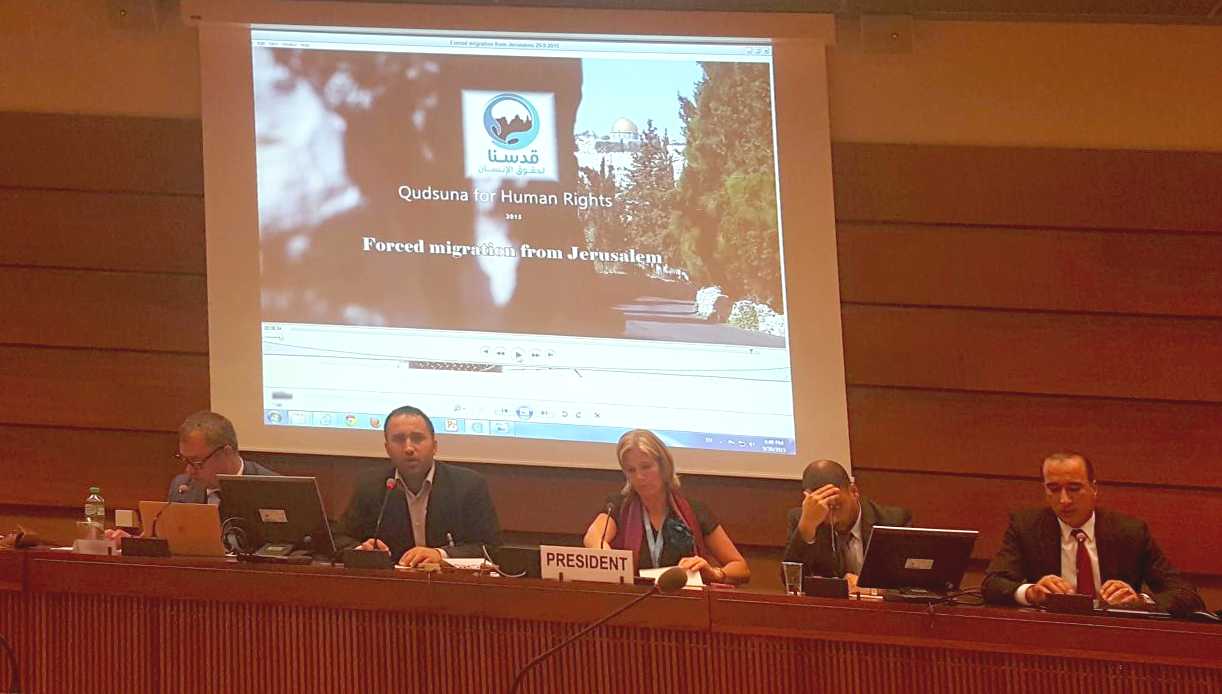 The bleak reality of the current situation and the neglect of the international community, was made particular note of by Issa who recalled Obama’s failure to mention Palestine in his speech on Monday despite the Palestinian flag being raised at the UN this week. Likewise, Issa described the silence and non-participation of certain UN states in the discussion of Palestinian rights during item 7 of the Human Rights Council as tantamount to a boycott in support of the oppressors.

Nevertheless, having painted this dark picture of isolation, violation and endless occupation, Issa concluded on a positive note. He encouraged the participants to give voice to the Palestinian people, not to share in the silence of the international community but to speak out against this injustice. Issa expressed his hope for the future and the inevitability of justice in the future.

Our third Speaker, Dr. Durgham Saif, a lawyer working for Qudsuna organisation, focussed his presentation on the current legal options for Palestinian residents and the legal strategies employed by himself and fellow lawyers working within Israeli courts. He used examples of real cases that he and his organisation Qudsuna had encountered and pursued, in order to reveal to us the reality of the situation on the ground and the challenges posed to Palestinians attempting to find justice in Israeli courts.

For Durgham, the heart of the conflict in East Jerusalem comes down to geography and demography and he too emphasized Israel’s huge investment in Judaizing East Jerusalem. With the Palestinian population dying or being forced out, the demographic of Jerusalem is progressively changing in line with Israeli ambitions. In the face of the sophisticated Israeli policy employed for expelling Palestinians from the city, Durgham described the legal options for Palestinians deported from the city. With huge mistrust for the Israeli judicial system, a legal predicament - not unlike that manifest in South Africa with the ANC - is the question of whether to even bring cases to the courts or not.

The situation that lawyers and Palestinian victims face with regard to filing cases against deportation is one plagued by bias and injustice. Durgham explained that often the Israeli Security Forces flag a person, be they an activist or a human rights defender or regular prayer-goer and prepare a huge file for victim. Based on state emergency rules of 1945, the ISF temporarily deport them from city of Jerusalem. This state of emergency has been in place for 67 years.  Under a state of emergency and military orders, administrative detention and deportation is possible, however, according to Israeli law deportation must be administered as a preventative measure for security reasons – which is not the case with the majority of Palestinian claims where it is used as form of punishment. Likewise under Israeli law if you are denied right to a hearing before a deportation order, then the order is nullified. However, this is not the case in reality. 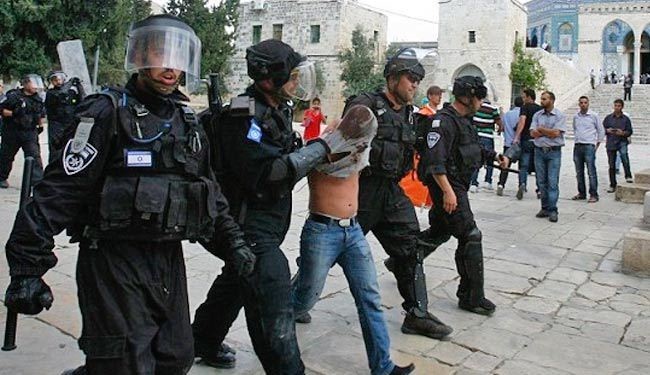 Victims are obliged to leave immediately, with a hearing and are given a map of where not to enter. As a purely administrative decree to leave the city, Qudsuna then file litigation or a petition with the supreme court, as an administrative deportation is illegal this and should be dismissed. Usually, the lawyers receive a prompt response of roughly 2 sentences, explaining that the ISF have secret evidence that such a person has committed illegal acts or has ties to illegal groups. The prolific use of secret evidence in Israeli courts against Palestinians hinders all justice to these victims of deportation. Durgham has witnessed cases where the secret nature of the evidence precludes him or the victim from knowing the mere reason for his deportation.

As a British barrister with particular interest in these cases and a personal story of harassment by Israeli authorites at Tel Aviv airport, Toby focussed his presentation on the the need for accountabiloity and the need to turn to the international area in pursuit of real accountability outside the Israeli courts.

He noted that the International Criminal Court, despite illusions, is not the answer to all problems. Reasons for this include underfunding, mismanagement and a lack of capacity to deal with conflicts as complicated as the one in question. If likely to initiate cases, likely only to deal with handful of cases. Icc looks at a situation has a jurisdiction to look at everything within a jurisdiction. Jurisdiction of ICC, two important points.

Toby shed light on the hindrance of the current jurisdictions in place in Palestine, explaining that for international involvement there has to be a mechanism in place under Palestinian jurisdication to deal with war crimes. Such a mechanism requires the Palestinian Authority to adopt a system, similar to that adopted in bosnia to establish a permanent court to deal with war crimes, with international jurisdiction but under Palestinian jurisdiction. He stressed that for legal academics such as himself there is little doubt that a number of issues and war crimes could be prosecuted under the ICC, but the need for unified law in Palestine is key. In Gaza the legal code is Jordanian, Gaza Egyptian and in Jerusalem Israeli. He emphasised that Palestine is a state and so it is time it started acting like one. The PA needs to unify the legal code and the way forward would be to get Palestinian legal practitioners working with international legal experts to do this.