Give Peace a Chance

On the 23 September 2013, Geneva International Centre for Justice in collaboration with International Organization for the Elimination of All of Racial Discrimination (EAFORD), Women’s International League for Peace & Freedom (WILPF), International Educational Development, Inc. (IED) and EuroMid Observer for Human Rights, organised a side event during the 24th session of the United Nations Human Rights Council. 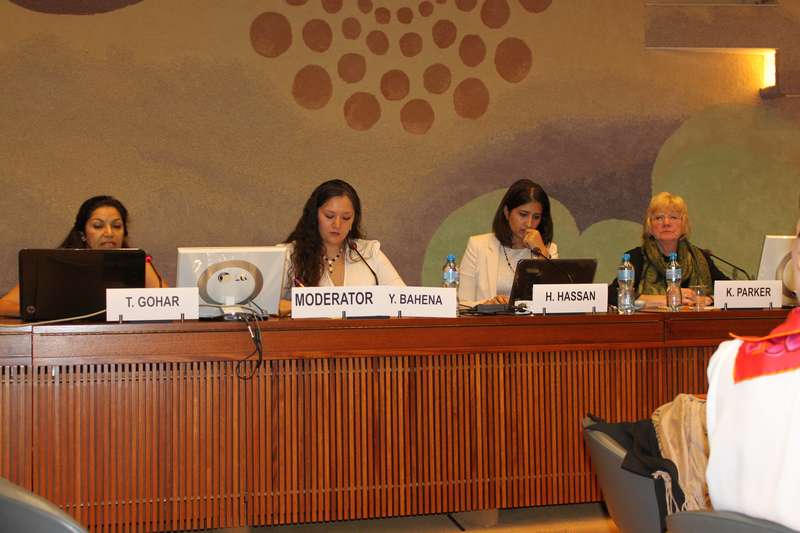 The panel explored the on-going case of conflict in the Middle East and North Africa and the role of the citizens in acting and demanding their right to peace. The panellist included Ms. Tomader Gohar, Representative of Citizen for Peace Building, Ms. Hanine Hassan, Researcher with EuroMid Observer for Human Right, Ms. Karen Parker, Attorney in Human Rights and Humanitarian Law and UN Representative of International Educational Development. The side event was moderated by Ms. Yanet Bahena, from GICJ. Mr. Mazin Kahel, the Chairman of the European Campaign to End Siege on Gaza, was given the chance to update the audiences with the new development about the campaign to end siege on Gaza and West Bank.

The case for Egypt

The citizens of Egypt played a significant role in these revolutions and demanded for a political and social change. Both, Mubarak and Morsi administrations had subjected the population to various forms of violence, which incresed under the Morsi rule to the point that fear and dread rose inside the society to an extend that gave birth to what was called "the second revolution".

Ms. Gohar concluded the future of Egypt must have an effective transition mechanisms, constitutional guarantee of rights and a democratic channel of changing powers. Furthermore there must be accountability, transparency as well as proving the citizens channels of voicing their concerns and active participation in governing the country. The Declaration of Human Rights is universal but its application is specific. The international community needs to provide technical assistance to the Middle East to help with the transition that is occurring.

The case of Palestine

Ms Hassan spoke about the siege on Gaza as well as the restriction of movements and human rights violations in Palestine. She described the disastrous situation of the by now over 6 million Palestinian refugees. The tragic consequences for the Palestinian people have been documented in literally hundreds of official reports issued by international, regional and national agencies, NGOs and governments, yet there has not been enough action. Ms Hassan discussed the increased demolishing and settlement as well as the systematic discrimination and abuse in the Occupied Palestine.

In a next step Ms Hassan explained the humanitarian suffering resulting from the situation. Approximately 5,500 Palestinian children in East Jerusalem do not attend school because they cannot be legally registered. Around 57% of Gaza households are food insecure and about 80% are aid recipients. Tightened restrictions let Palestinian exports to Israel plummet by 24% between 2008 and 2011. It is essential to reduce Palestinians’ economic dependence on Israel and to facilitate their integration into Arab and other regional economies. The humanitarian emergency in East Jerusalem is increasingly tangible. If the current trend continues, it will increasingly be closed off and choked by settlement activity, expropriation of buildings and re-allocation of land from living space to parks, historical sites and tram terminals.

Ms. Hassan concluded that there has been countless amounts of reports in regards to the human rights violations in Palestine. These reports highlight all facets of Israeli control of Palestinian land and people, each now stretched to a breaking point that cannot be sustained any longer.

The case of Iraq

Ms. Parker discussed the impact of military intervention and invasion of Iraq, including the misinformation provided about presences of weapons of mass destruction. Iraq invasion shuttered inner harmony in Iraq and the international harmony on issues relating to arms conflict. The United States has committed several of violations, including ‘the shock and awe’ effect, which has severe psychological impact that should be considered as act of terrorism. Ms Parker gives her personal experience to illustrate the damaging effect of ‘shock and awe’ tactic.

Ms Parker discussed the role of United Nations in the US led invasion of Iraq. United States used weapons such as depleted uranium during invasion against international law. Iraq is still suffering from the use of uranium and will take very long period of time to recover. US has committed various war crimes in Iraq including torture such as the case ‘Abu Ghraib’ prison. Furthermore US trivialised the concept of ‘torture’ as demonstrated in the lawsuit of Abu Ghraib torture victims against US Military. Well establish international concept that torture is not tolerated even in war times. However the United States court ruled that the torture committed was outside US jurisdiction thus the victims had no ground to sue. Even greater injustice the court ordered the victims to provide monetary compensation to the Military Advisors. This is against international law and American precedent since 1980s.
Ms. Parker concluded that Iraqi has been subjected so much torture and wars that has left the country without direction and in chaos. Iraq is one of the biggest tragedy of the 21t Century.

Mr. Mazin Kahel - The  Chairman of the European Campaign to End Siege on Gaza

Mr Kahel spoke about the campaign to end siege on Gaza and West Bank. The most recent situation in West Bank, the destruction of tunnels by the Egyptian Government.

The siege on Gaza is effecting 1.7 million people in every aspect including housing, access to water, health, movement, education and daily life. The effect of siege is significant and is in violation of international humanitarian law. Israeli authorities must comply with international law.

For the past seven years Gaza has been under siege and their human rights are violated by the Israel Occupying Authority. Tunnels are shut which is denying them access to the necessity of life. Since the Israel attack in 2008, schools and hospitals are still destroyed without having access to reconstruct the buildings. One third of Palestinians in Gaza without a job, 300, 000 people are not able to find work which is creating instability in the region.

The European campaign is mandated to end the siege on Gaza and hold Israel accountable. The international community is obliged to pressure Israel to remove the siege of Gaza and hold Israel accountable for targeting Palestinians, depriving the circulation of goods and movements. Mr Kahel concluded with calling on international community address the human rights violations and to exercise economical sanction on Israel till they respect the human rights of Palestinians.

Following the presentations, there was a chance for the audience to ask the panellists questions. The Panellists answered the audience’s questions and provided further explanations. GICJ and its collaborators would like to thank all of the speakers for their presentations.