Geneva International Centre for Justice strongly condemns the heinous attacks by Israeli forces on Palestinians in Gaza who were gathering today, Monday 14 May 2018 as part of a series of demonstrations called “Great March of Return”, which began on the 30th March 2018 in the Gaza. The aim of the march is to demand the right of return for Palestinian refugees. Reports state that over 50 Palestinian protesterors have been killed and nearly 2000 have been injured where Israeli forces allegedly opened fire on the protesters and launched teargas and firebombs. The act of Israel represent a new war crimes that should not go unpunished.

The demonstration was fuelled by the United States decision to open their embassy in Jerusalem despite international condemnation. It should be noted that the Trump administration’s decision to move the US Embassy to Jerusalem is in direct contradiction to several UN resolutions, in particular, Resolution 181 (II) of 29 November 1947 and Resolution 36/120 of December 1981, among others. Worse still, the move was scheduled to take place today, Monday 14th May, the eve of Nakba Day (15 May). 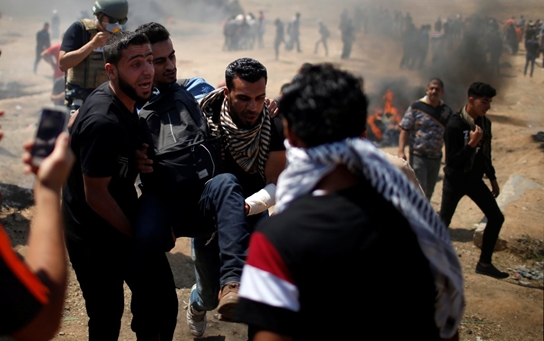 On 30th March 2018 the “Great March of Return” was launched; a series of demonstrations that is to last for six weeks and is taking place in the Gaza strip. The aim of the march is to demand the right of return for Palestinian refugees and their descendants, into what is now Israel. The demonstrations are also protestering against the blockade of the Gaza Strip, among numerous other human rights violations against the Palestinian people. Since the launch of the “Great March of Return” over 100 Palestinian protesterors have been killed by Israeli forces including children, several journalists, and a person with a disability.

Geneva International Centre for Justice strongly condemns the war crimes committed by Israel and once again calls on the international community to not only condemn acts of violence by Israeli forces on the Palestinian people, but also to end the occupation of Palestinian Territories, that has continued since 1967. Geneva International Centre for Justice is concerned about the innocent victims of these attacks and calls to bring those responsible to justice.