On 28 November 2017, Geneva International Centre for Justice (GICJ) submitted an urgent appeal to UN High Commissioner for Human Rights Mr. Zeid Ra'ad Al Hussein to express its grave concern about the threat of expulsion faced by the Palestinian community of Susiya, a village located in the South Hebron Hills of the occupied West Bank. The Israeli State Attorney’s Office announced on 22 November that within 15 days it would demolish some 20 buildings, representing approximately one-fifth of the total number of buildings in the village. On 27 November, GICJ received an urgent appeal by local activists about the pending demolitions in Susiya, whose inhabitants fear for the safety of their homes and families.

The Israeli state’s pretext for demolition is that these buildings were constructed in violation of a judicial order, a claim that the community of Susiya strongly denies. Israel has no right under international law to alter the local legislation and practices governing property and settlement, unless there is a clear security need to do so. The consistent Israeli policy of population transfer aimed at the acquisition of land and change of the demographic composition of the occupied Palestinian territories results in incessant displacement among the Palestinian population and is in flagrant violation of international law. The planned measures are in grave violation of human rights and international humanitarian law, particularly the Fourth Geneva Convention – Article 53 of which explicitly prohibits the destruction by the Occupying Power of property save for absolute military necessity. 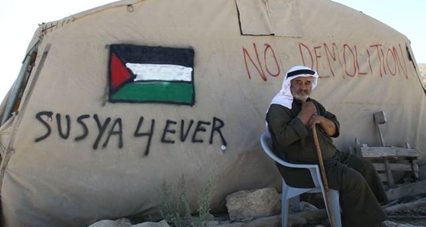 Implications of the Pending Demolitions

The expulsion of the residents from Susiya would signify the complete loss of a unique way of life and traditional means of gaining livelihood of Palestinian farming and herding communities, who would be irrevocably deprived of their primary means of subsistence. While settlers from the adjacent settlement have long been encroaching on their land, the community’s farmland would then be taken over completely by settlers, without Israeli law enforcement authorities taking any action to prevent them. 400 dunams (~ 100 acres) of land that belonged to neighboring communities have already been usurped by illegal Israeli settlements.

As Attorney Quamar Mishriqi-Assad, co-director of Haqel: In Defense of Human Rights and representative of the residents of the village, has noted: “The demolition of one-fifth of the village is an extreme step that will damage the most basic humanitarian needs and the very humanity of those involved, without it even having been proved that they have violated the law. As winter arrives, the imminent demolition will leave 100 people, half of them, children, without shelter. This is contrary to Israel’s obligations under international law. Israel is guided neither by law nor justice, but by the desire to evacuate the area.”

The State’s announcement implies the immediate destruction of residential buildings, a clinic, and livestock pens, causing irreversible damage to the basic rights of some 100 residents of the village (half of whom are children) who have nowhere else to live. Adv. Quamar has submitted a request to respond to the state’s response.

The residents of Susiya have never been given a chance to regulate their homes and village. Over the years, residents have attempted to regulate their residence of their land. However, all their requests for permits, appeals, and a plan have been rejected. Not even a single building has received a permit.

Background: The Palestinian villages of Susiya and Area C

The Palestinian village of Susiya is home to some 300 residents. The residents were expelled from their original village 30 years ago without the Israel state assuming responsibility for their fate and without providing them with any housing solution. To this day, the residents are forced to manage for themselves on their land, which has been recognized by the state as their private land, in shacks and tents, without basic infrastructure or social services. They face a constant threat of demolition and expulsion from their lands.

Sadly, the case of Susiya is far from being singular. Palestinian Bedouin and herding communities inhabiting Area C, the 60 % of occupied Palestine completely controlled by Israel with regards to security and land-related civil issues such as land allocation, planning and construction, and infrastructure, face particularly perilous living conditions. In most cases, these communities have already been displaced several times and were resettled into areas which did not meet their basic needs as grazing/agricultural land and water resources were lacking and/or forced them to abandon their traditional nomad means of gaining livelihoods. Moreover, most of these communities face severe restrictions on access to natural resources and water utilization, are not connected to permanent electrical sources and are not provided with social services.

The villagers of the area can only pursue their traditional farming and herding activities with great difficulty and under considerable danger of settler and military violence. Encircled by settlements and “military zones”, shepherds cannot graze their flocks freely as they are prohibited from entering vast areas of their land, which are rarely delineated. If they cross Israeli-designated areas of their own land, they can face arrest and heavy fines. Soldiers often observe or interfere with the shepherding, ordering Palestinians to leave under the threat of arrest or heavy fines. The Israeli government has also declared certain plants, traditionally used as herbs for tea and foodstuff, “endangered species”, thereby prohibiting Palestinians from collecting them. Settlers often directly target Palestinian livestock and natural resources, for instance by poisoning animals, water sources, and crops.

As the local villages are rarely issued construction permits, their built houses, tents, water services including traditional cistern-based water infrastructure or solar panels as well as schools and health clinics can receive demolition orders at any time, thereby depriving them of all aspects central to an adequate standard of living. Socioeconomic indicators in health, water, and education are thus exceedingly low. Especially Bedouin women suffer from a lack of employment, health care, education and access to land. Many Bedouin communities are therefore compelled to relocate to urban townships, in which they have to forsake their nomadic and agricultural way of live and lose their primary means of subsistence.

In its letter, GICJ urgently called upon the High Commissioner to put pressure on the Israeli government to cancel the pending demolition orders in Susiya, to refrain from its illegal policy of house demolitions, and to immediately cease all its illegal policies and practices violating Palestinians’ inalienable rights. It asked the High Commissioner to support the efforts by several Member States to introduce necessary measures to hold Israel accountable and ensure its compliance with human rights and international humanitarian law. Finally, GICJ urged the High Commissioner to do all that is in his mandate to ensure the protection of the Palestinian people.