Justice and human rights are the basic issues

During the 26th session of the Human Rights Council Geneva International Centre for Justice (GICJ) participated in several side events and spoke about the impact of the prolonged occupation of Palestine. Based on first-hand experience from the ground GICJ enlightened participants on the history, background and causal factors relating to the Israeli-Palestinian conflict. 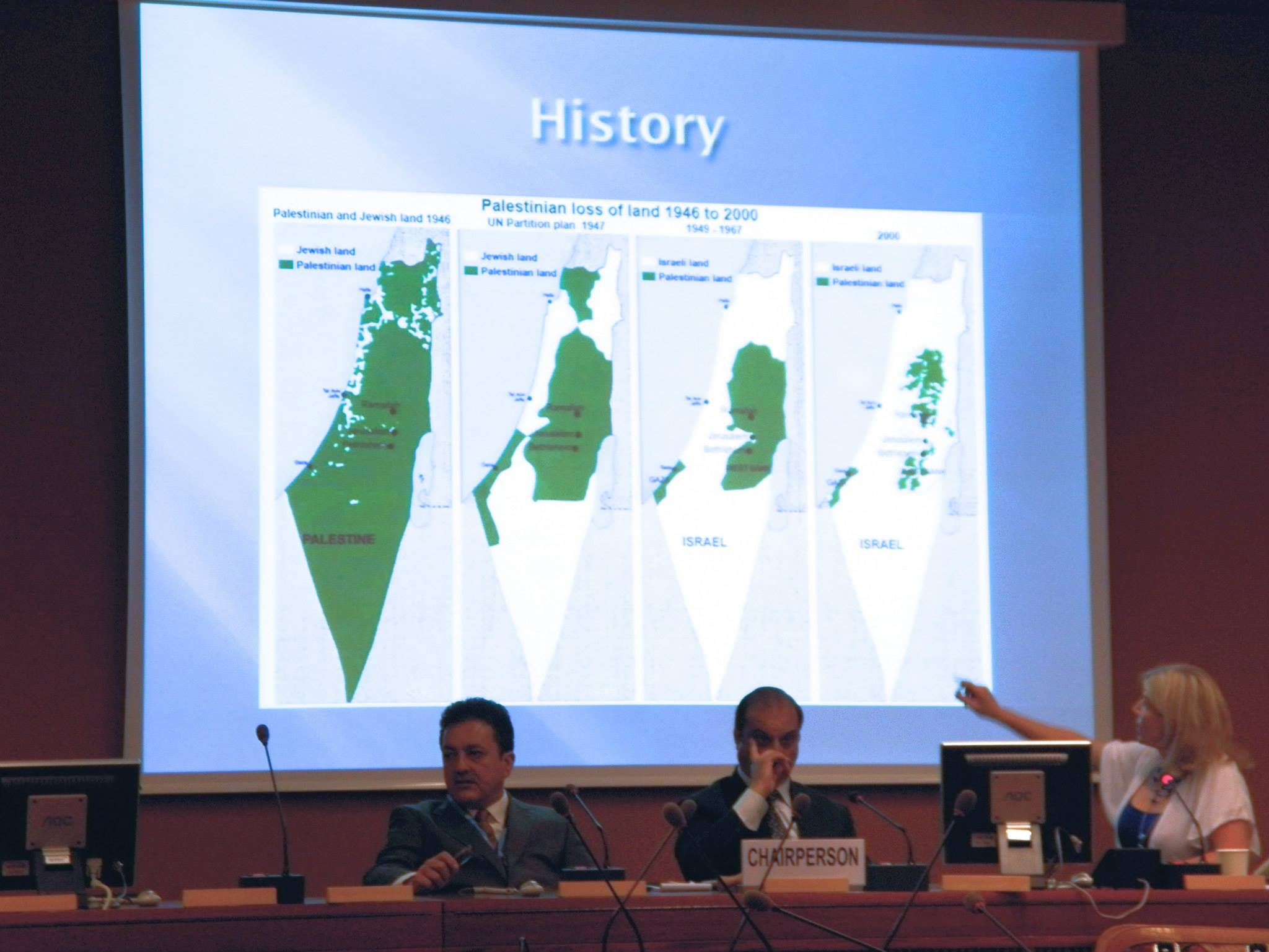 On 13 June 2014 GICJ held a presentation during a side event under the title “Human Rights under Occupation". Beginning from the historical division and occupation of Palestine Daniela from GICJ drew a picture of the injustice and suffering inflicted on the Palestinians due to the belligerent and unrelenting occupation of Palestine.

The impact of the illegal expansion of settlements together with the heavy military presence and racial discrimination in the daily life of Palestinians is serious, she warned and concluded that it is far past time to end an unbearable situation of imposition of injustice that finally destroys both - occupier and occupied.

Below some of the facts presented during this presentation 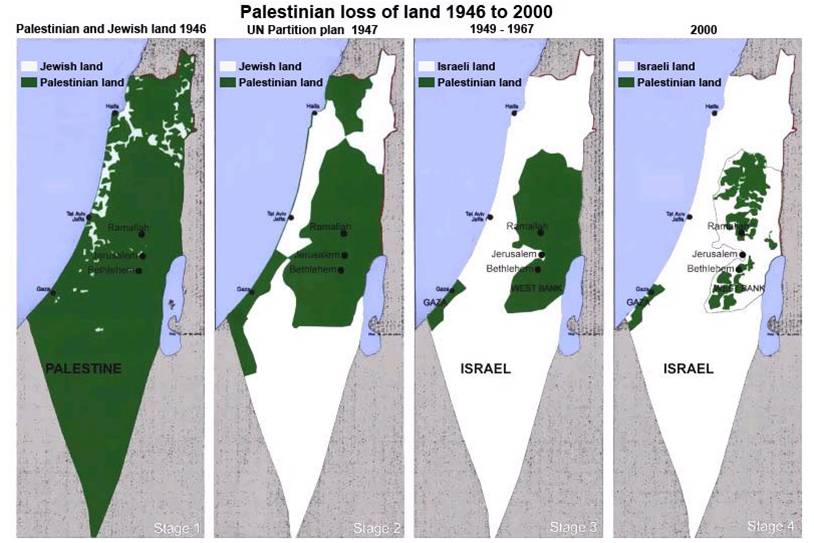 Loss of land: From the left to the right the map shows the evolution of sovereignty over historic Palestine. The green shows how much land was owned by Palestinians before 1947, how much land was allocated to Palestine in the 1947 UN partition plan, yet to what extend the land was reduced during the civil war following the Palestinians rejection of this plan. The last panel demonstrates the less than half of the West Bank and Gaza that falls under even limited Palestinian control today. 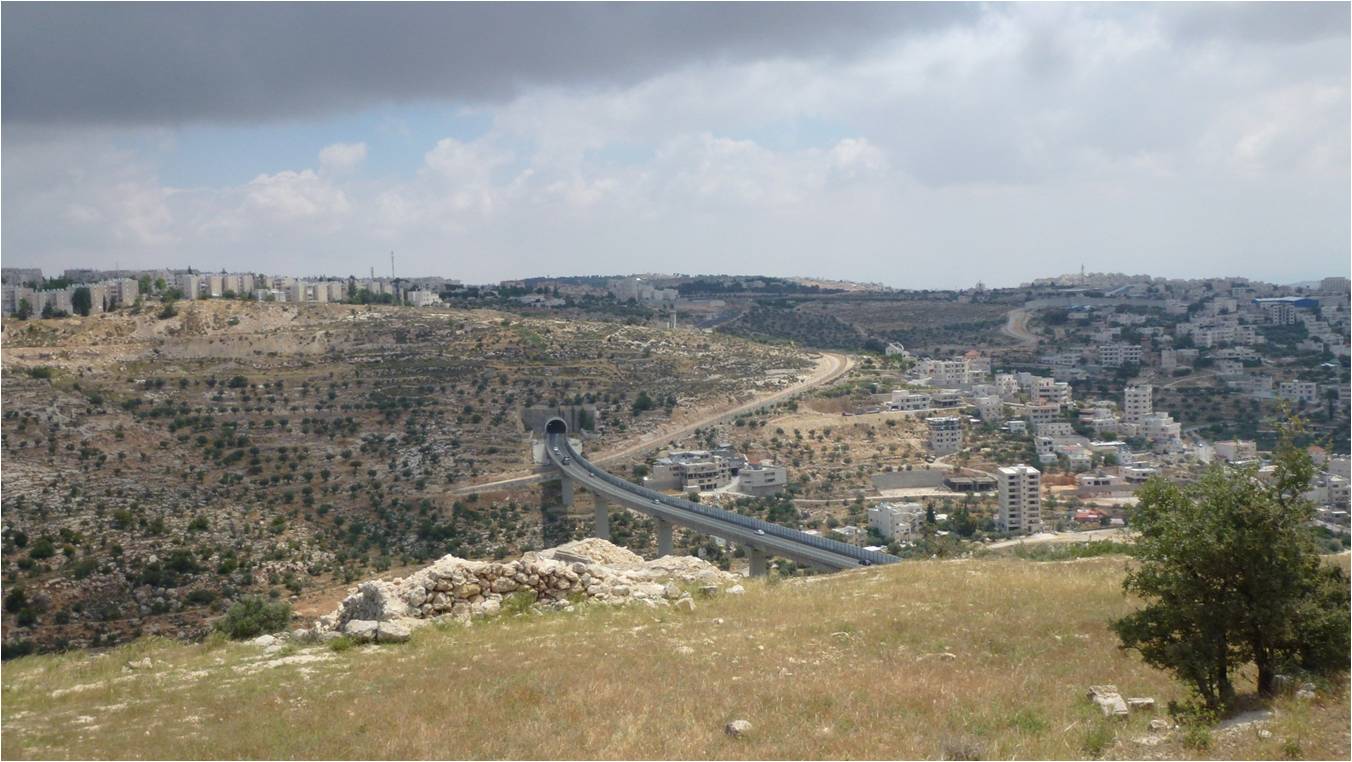 The bizarre result of the division of Palestine into area A, B and C are images like the one on the left, which shows one of the “settlers only” roads that connect the illegal settlements in the West Bank and belongs to area C, meanwhile the ground below belongs to area A and is under full Palestinian control. On a side-note: Several Israeli leaders in high government office claim Area C as Israeli territory

The most visible impact of occupation on Palestinians is visible in an ongoing and creeping land annexation together with heavy military presence and discrimination. 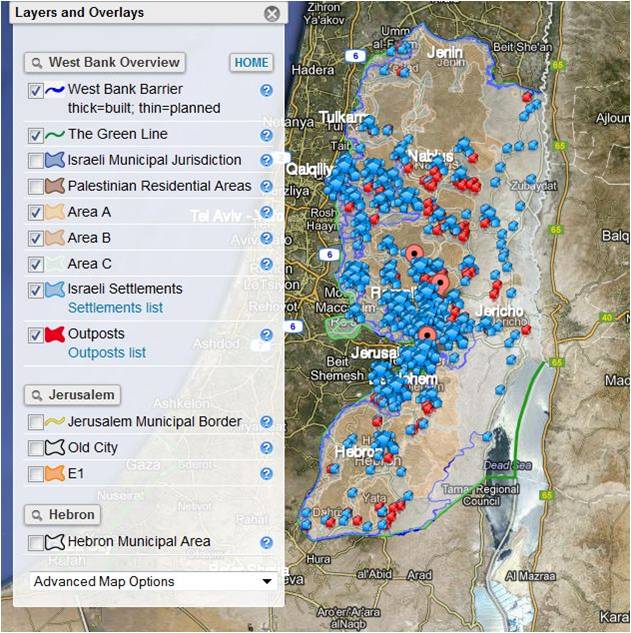 Settlements: Against the provisions of article 49 of the Fourth Geneva Convention stating that „The Occupying power shall not deport Or transfer part of its own civilian population Into the territories it occupies“ some 250 settlements in the West Bank, including East Jerusalem, have been established, either with or without Government authorization. The number of settlers is estimated at 520,000, mostly living in area C. The Settlements are generally located among the more vulnerable sections of Palestinian society, predominantly agrarian villages, and aimed at annexing key areas of the West Bank. 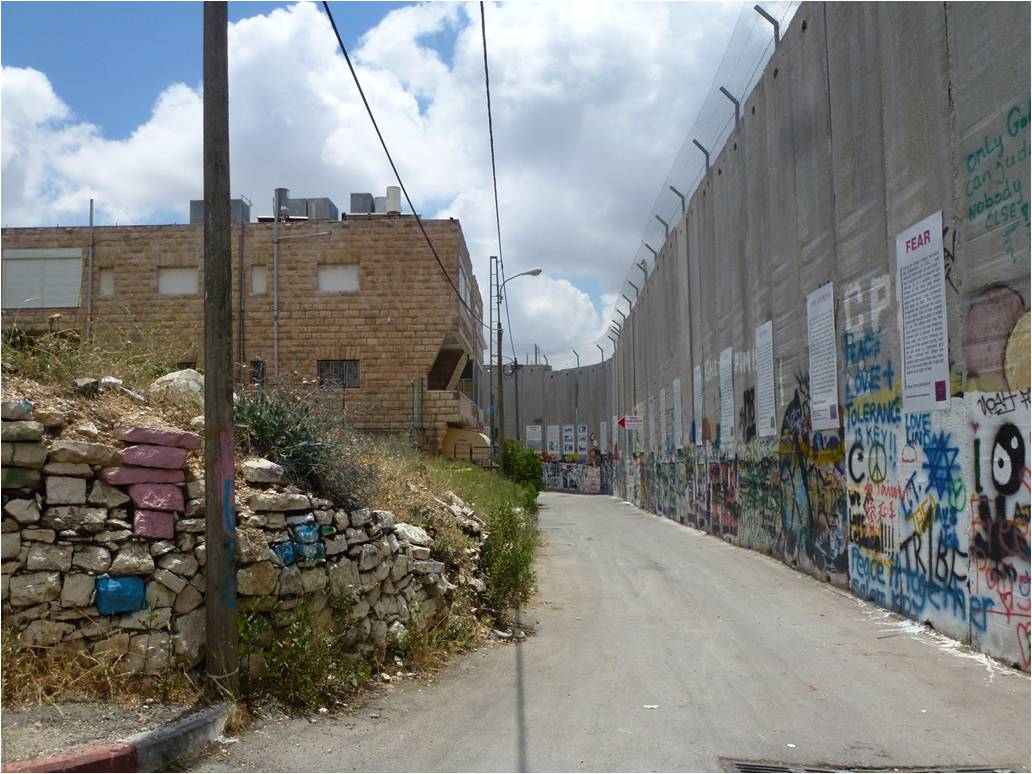 The separation barrier is 422 miles of zigzagging curves and loops, far beyond the Green Line. On 9 July 2004 the International Court of Justice held that Israel’s building of a wall must stop immediately, noting that combined with the Israeli settlements, the barrier alters the demographic composition of Palestine and impedes the Palestinians' right to self-determination. Nevertheless the construction continues. As of 2012, 439.7 km of barrier (62.1%) have been built, 56.6 km (8%) are under construction and 211.7 km (29.9%) are projected. Upon completion, the barrier's total length will be approximately 700 kilometers. 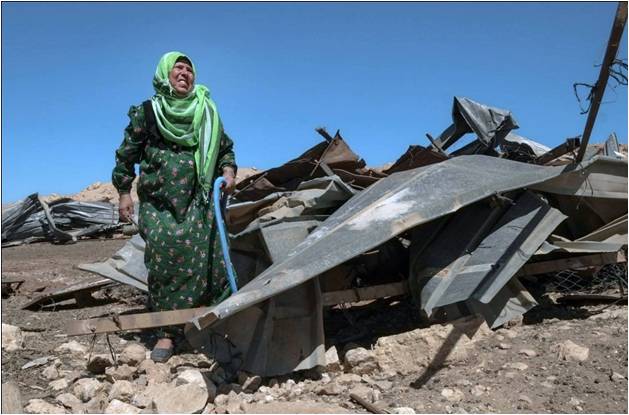 Demolitions of Palestinian structures across Area C and East Jerusalem accelerated throughout the time of peace talks beginning in July 2013 with a 43 percent rise in demolitions and a 74 percent rise in displacement compared to the same period in 2012. During the 9 months a total of 567 Palestinian homes were demolished and Israeli forces confiscated more than 14,000 acres of lands owned by Palestinian citizens, only to register them with names of Jewish Settlement companies. 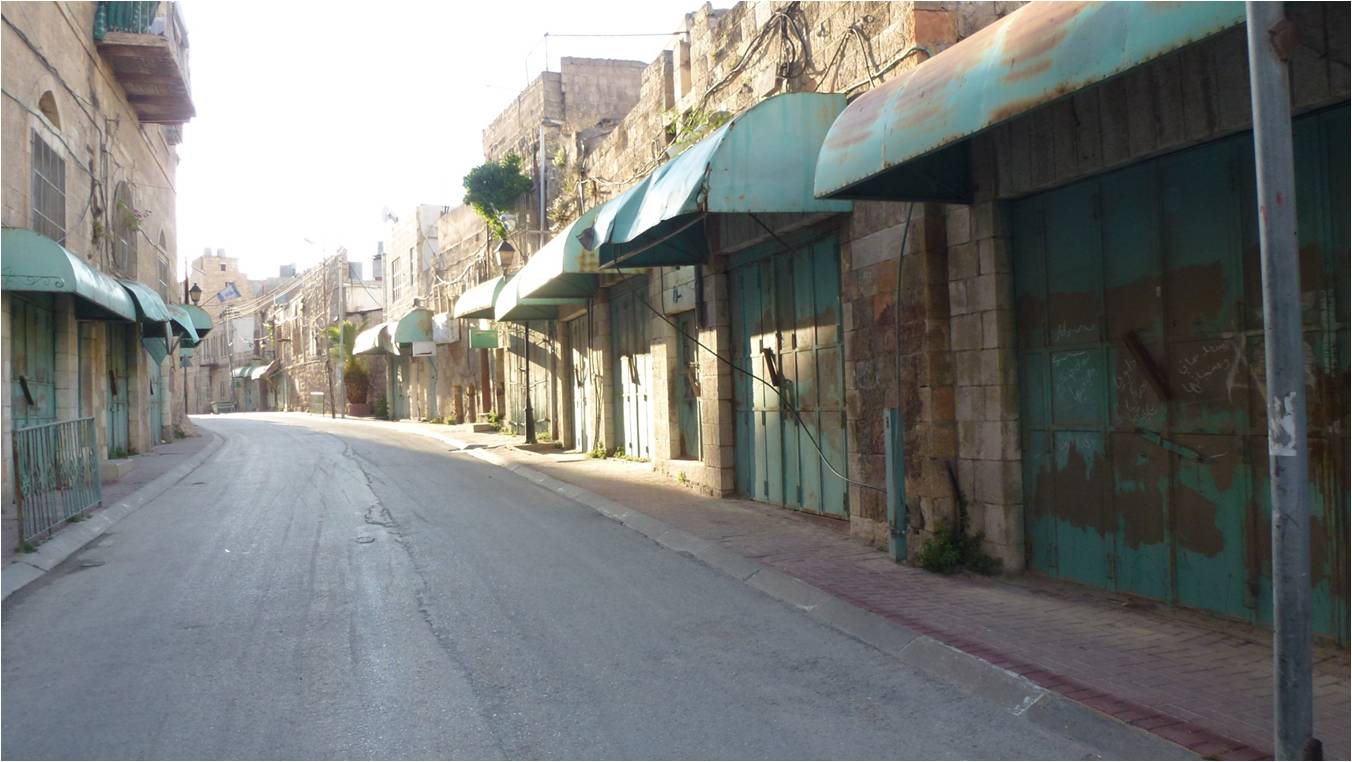 Closures: In Hebron, where settlements have been installed in the very heart of the city, a number of 512 Palestinian shops in the vicinity of the settlements were closed due to Israeli military orders and another 1.100  due to heavy measures imposed. The remaining families living in the street are subject to severe restrictions and need to leave their homes through their back doors or climb over their neighbor’s roofs in order to reach their homes. 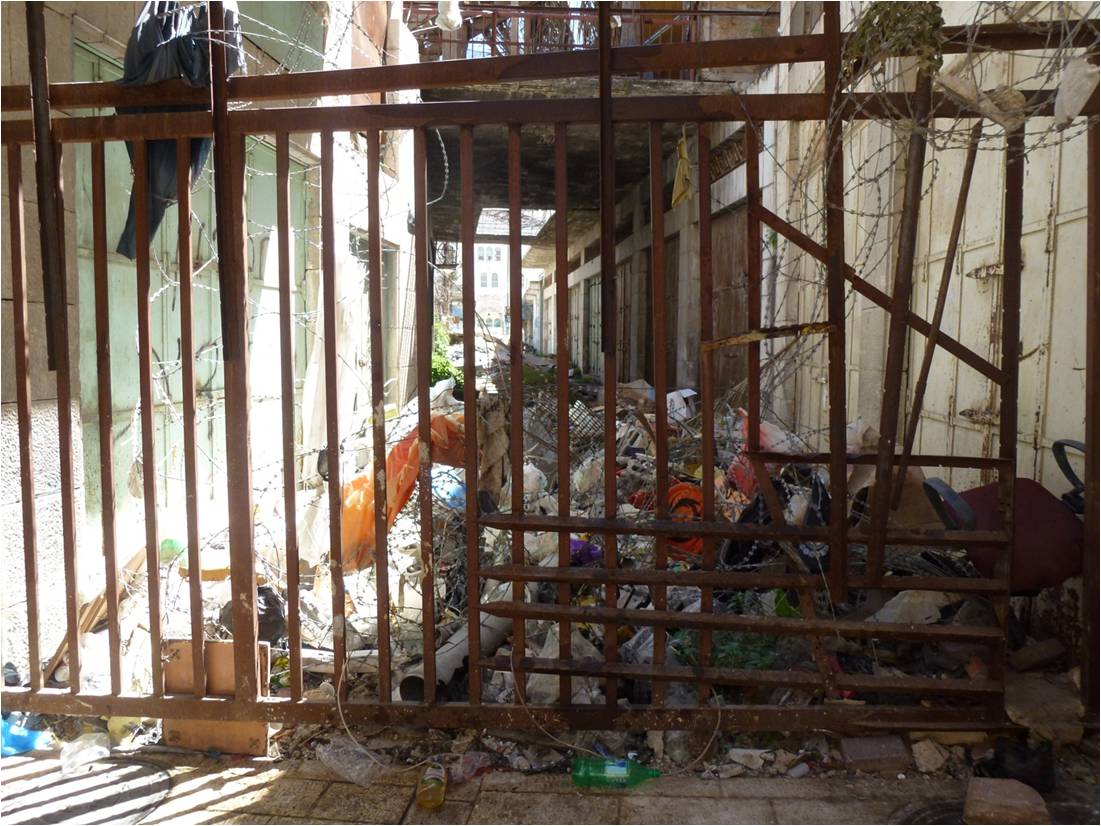 Settler violence: As the occupying force, Israel must protect the Palestinians in the West Bank. However, authorities neglect to fulfill this responsibility and do little to prevent Israeli civilians from attacking Palestinians. Violent settler activity is commonly aimed at pushing Palestinian families out of the  area, particularly those living close to settlements. In Hebron metal netting has been erected above the sections running under the settlements, from where settlers throw garbage and stones to discourage movement below. 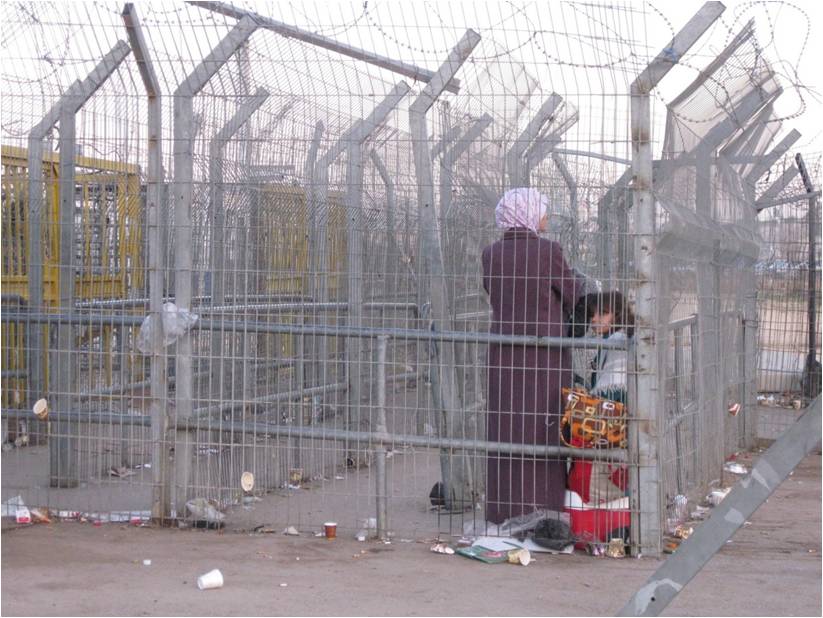 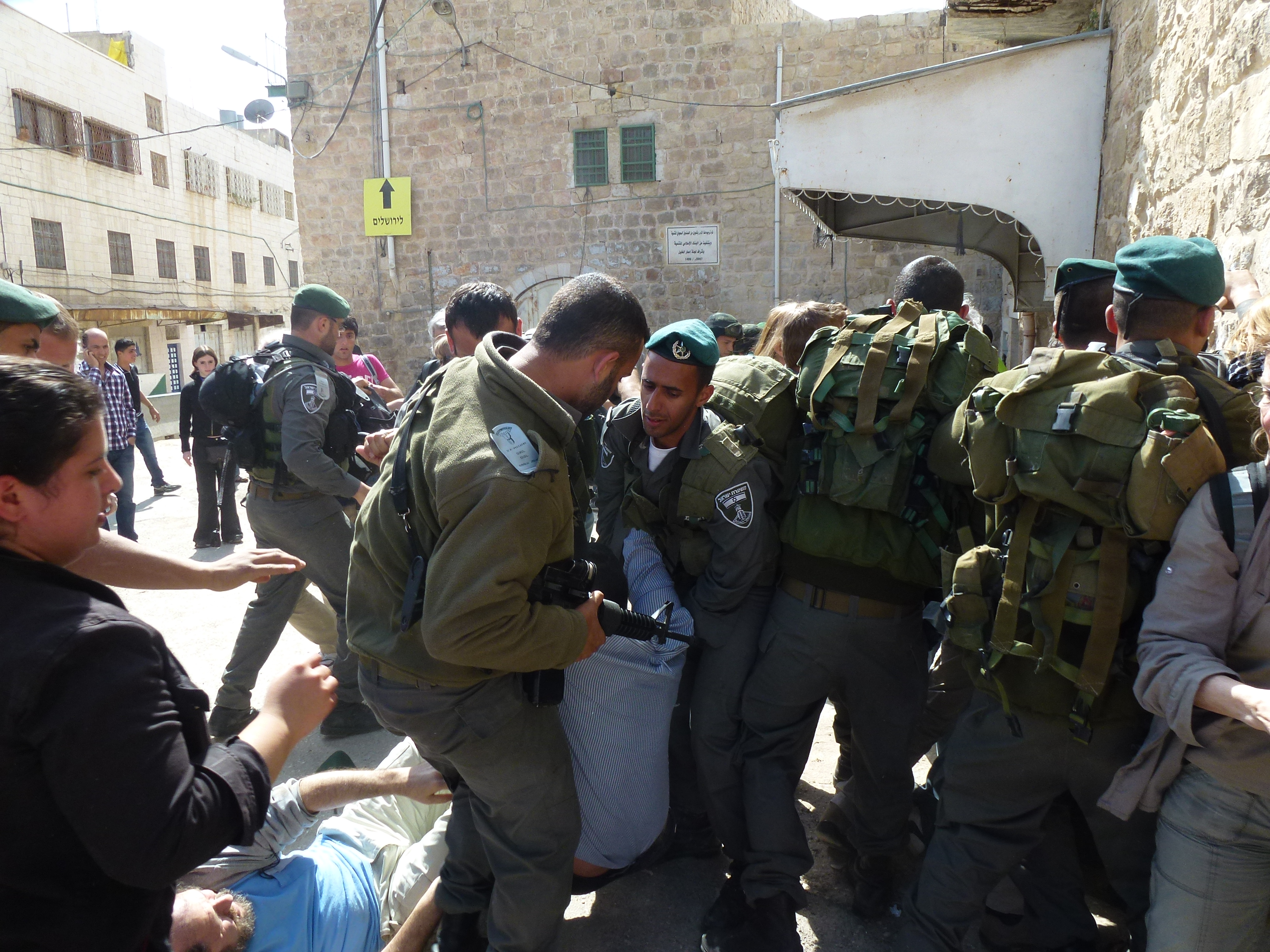 Arbitrary arrests: Palestinians in the West Bank are subject to military law system, whose legal foundations and practices do not comply with international standards. Israel continues to use administrative detention for up to 6 months, yet these detentions can be extended indefinitely. In practice many have been detained for much longer periods, some up to or over 7 years. As of March 1st 2014, 5,224 Palestinians were held in Israeli detention, including 210 under the age of 18. A total of 183 prisoners were held in administrative detention. The conviction rate for Palestinians in Israeli military courts was 99.74 percent in 2010. 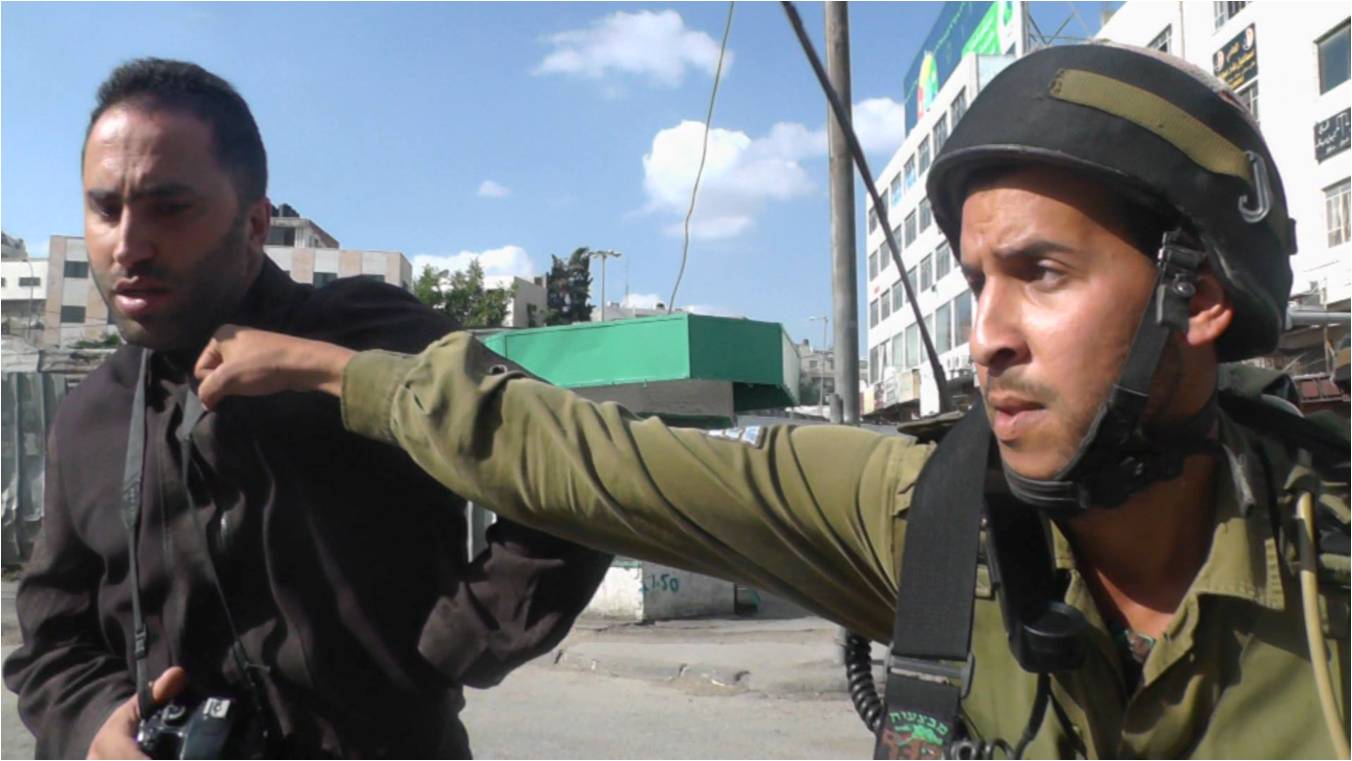 Violence: Soldiers continue to use excessive violence against Palestinians, including death threats and systematic intimidation against human rights defenders. At the end of May 2014 the number of Palestinian children killed by Israeli forces in 2014 was four. Over 1,400 Palestinian children have been killed by the Israeli military since 2000. The Israeli military’s own regulations dictate that live ammunition must be used “only under circumstances of real mortal danger,” but the regulations are frequently ignored by Israeli soldiers.

The full presentation can be downloaded here

On 17th June 2014 GICJ participated in the side-event “Media Human Rights Advocacy for Women and Girls”, an event organised in conjunction with several other organisations to deliver a presentation on the current situation of human rights in Palestine. This time GICJ put a special focus on the conditions being faced by children under occupation in Palestine and the lifelong trauma of growing up in conflict under military rule. 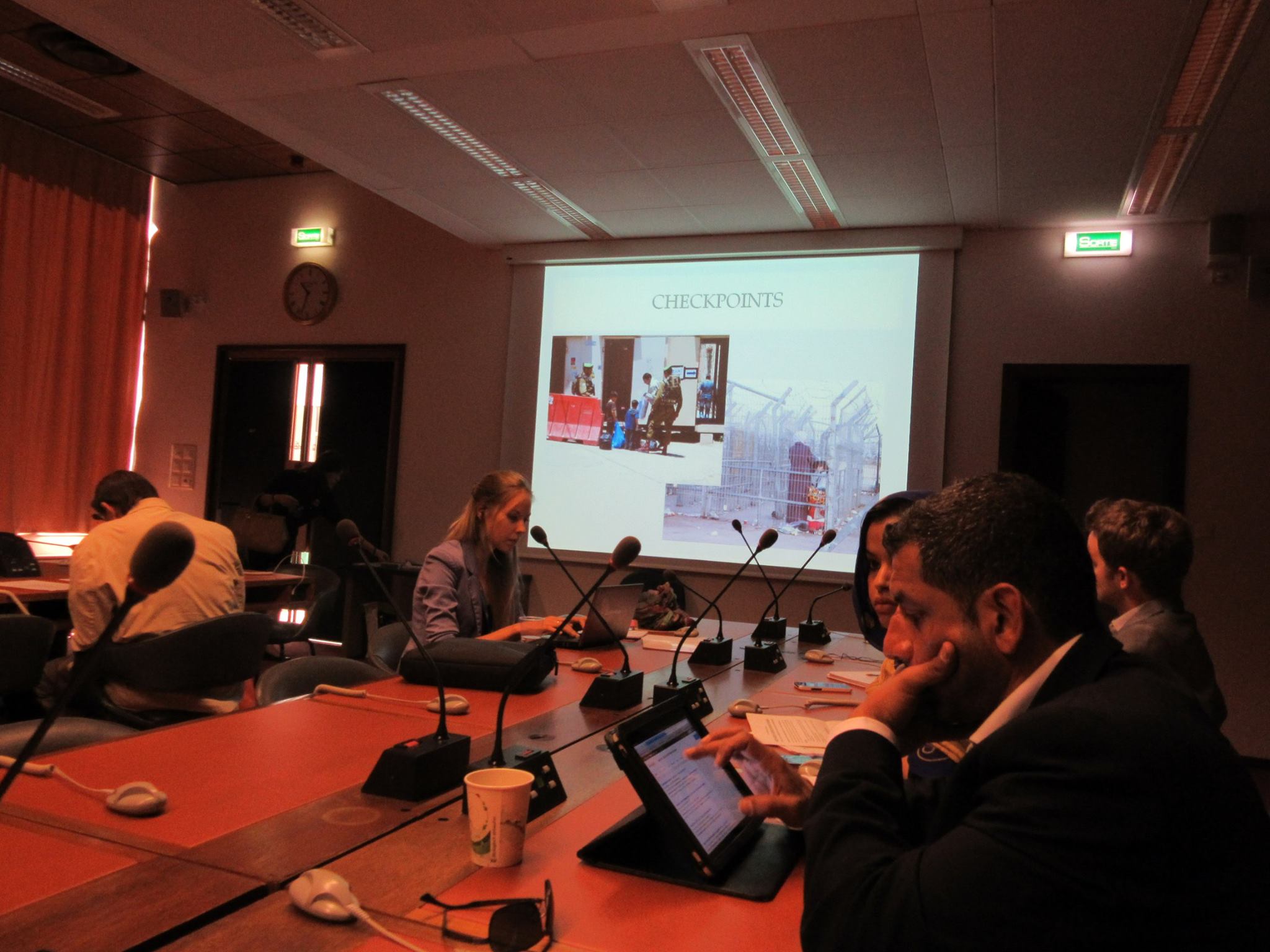 After a short introduction about the overall situation GICJ spoke about the different aspects of occupation, especially those that affect children. These issues are continuous and ongoing and GICJ remains deeply concerned over these violations coupled with the impunity afforded to the perpetrators. The aim of achieving justice, accountability and equity for all victims of human rights violations remain an ongoing task and the sooner the ruthless occupation ends the better for all, GICJ concluded.

Below some of the facts highlighted during this presentation 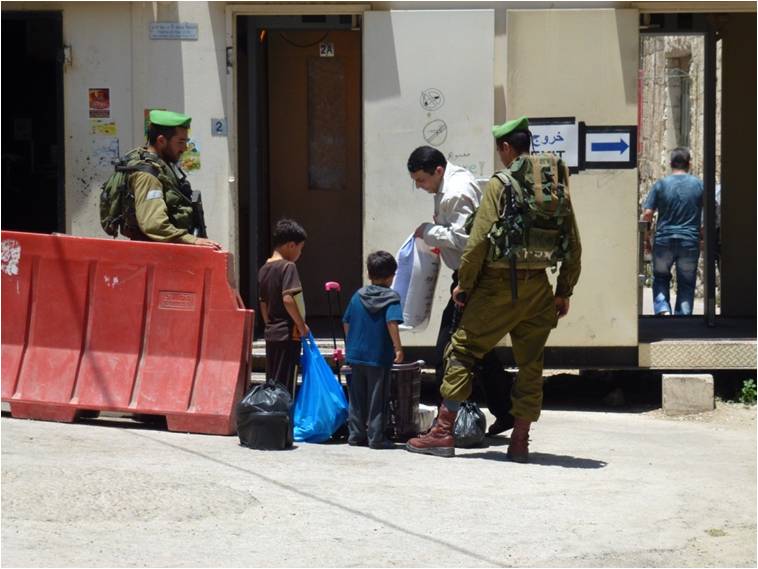 Checkpoints: The 58 checkpoints throughout the West Bank and notably the 17 inside H2 in Hebron are a nightmare for Palestinian children. Heavily armed soldiers often arbitrarily detain or arrest miniors on their way to school, sometimes even children as young as four-years-old. International observers try to monitor the situation in order to provide a minumum standard of protection for the children. 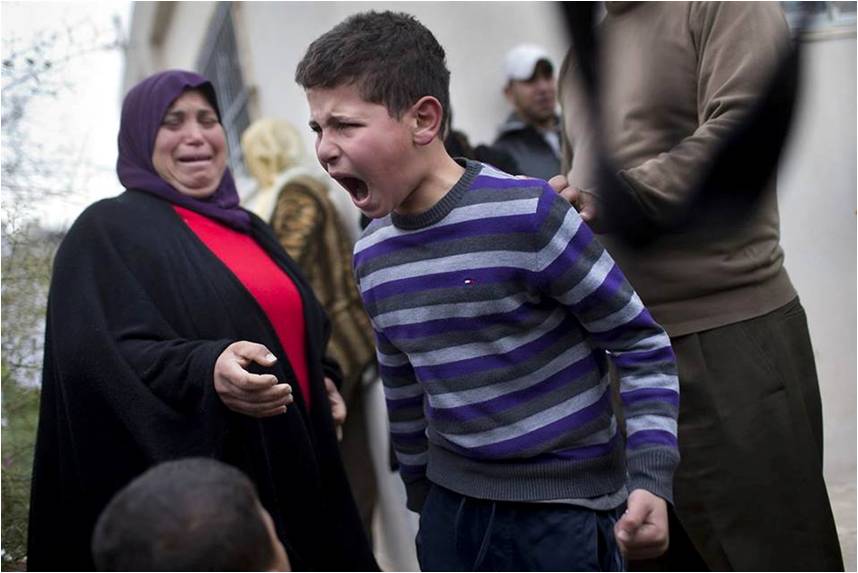 As Demolitions across Area C and East Jerusalem accelerated throughout the time of peace talks, children were often among the most affected. Often these demolitions are carried out in area C, where it is almost impossible for Palestinians to receive building permits even on their own land. As a result many families build without a permit and face demolition orders for their family homes, with bulldozers often arriving at unexpected moments and without giving the families the time to collect their belongings.

The video below shows a Palestininan child after his family house has been demolished by the municipality in the east Jerusalem neighborhood of Beit Hanina on 5 Februrary 2013.

Arrests: Against international regulations the number of Palestinian children held in solitary confinement and subjected to harsh interrogation and general mistreatment in Israeli prisons was increasing by 2 percent in 2013 compared to the previous year. The average number of Palestinian children in Israeli military detention at the end of each month during 2013 was 199. Over 76.5 percent of these children experienced some form of physical violence and 98 percent were not informed of the reason for the arrest and unlike Israeli not accompanied by a parent and are interrogated without the benefit of legal advice, or being properly informed of their right to silence.

The video below shows the horror in the eyes of a Palestinian child after he was arrested for allegedly having thrown a stone. Terrified from fear of the soldiers he tries to escape and hide but in vain. The child will be traumatized for life. 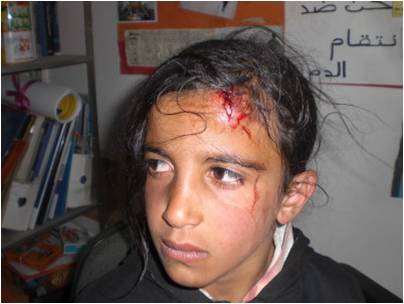 Violence: Palestinian children and youths are often subjected to settler violence or abuse from side of the soldiers, including the use of life ammunition. For example in March, Israeli forces shot and killed Yousef al-Shawamrah, 14, with live ammunition in the southern West Bank near his village of Deir al-Asal. He was shot while looking for thistle in an area of land belonging to the village that now sits on the other side of Israel’s separation barrier. As he and two friends crossed through an open area, soldiers fired live ammunition toward the boys, hitting Yousef in the hip and back. Over 1,400 Palestinian children have been killed as a result of Israeli military and settler presence in the Occupied Palestinian Territory since 2000.

The video below shows the willfull killing of Nadeem Siam Nawara, 17, and Mohammad Mahmoud Odeh Abu Daher, 16, on 15 May 2014. The minors had participated in a demonstration near Ofer military prison and did at no moment pose a mortal danger. The Israeli military later denied the use of life ammunitation and ordered the removal of the surveillance cameras that had recorded the incident.

The full presentatin can be downloaded here