On the 11th of July 2017, the United Nations High Commissioner for Human Rights (UNHCHR) Zeid Ra’ad al Hussein made a statement on the current situation in Iraq, in particular regarding the dire situation in Mosul and on the accountability and reconciliation in Iraq. In this regard Mr. Hussein highlighted the plight of civilians saying “The women, children and men of Mosul have lived through hell on earth, enduring a level of depravity and cruelty that is almost beyond words” at the hands of ISIS. In his statement he also rightly mentioned that, “ISIL’s serious and systematic violations of international humanitarian law and gross abuses and violations of human rights, including the sexual slavery of women and girls, committed over these past three years have left deep scars on Iraqi society”.

Geneva International Centre for Justice (GICJ) agrees with the above statements and in a letter on 13 July, 2017 addressed to the Office of the High Commissioner for Human Rights (OHCHR) added that further grave and systematic violations have been committed by the International Coalition, led by the United States, and the Iraqi forces including heinous crimes committed by al-Hashd al-Sha’bi militias. For better accountability measures GICJ asked the OHCHR to establish an International Independent Commission and an International Court to hold perpetrators to account and bring justice to the people of Iraq. 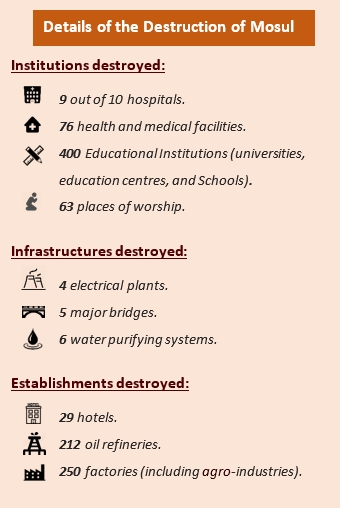 GICJ also highlighted that the reckless fighting has led to the total destruction of Mosul; a city with great historical significance that is pertinent to mankind’s civilization. The careless and damaging actions by the Iraqi military and Coalition forces have resulted in irreparable damage to historical and cultural sites. In addition to the destruction by ISIS, there are hundreds of archaeological sites that were destroyed by the Coalition and Iraqi forces. It is important to note that such targeted destruction constitutes as war crimes and perpetrators should thus be held in account.

Additionally, the destruction of the city’s infrastructure such as roads, bridges, water and sewage systems, and communication facilities have also taken place. More importantly, the destruction of the health and educational systems in the province immediately and directly impact to the well-being of citizens. Moreover, towards the securing of Mosul over 60 other cities and villages in the province also suffered havoc. The erasure of human history and civilization cannot be taken lightly and this is why GICJ calls to the OHCHR to take the necessary and immediate measures to avoid further catastrophe.

GICJ is also more than concerned about the lives and plight of civilians in Mosul. On the ground contacts continue to provide GICJ with reliable information illustrating the devastating situation civilians of Mosul have faced throughout the past 3 years up to today. Thousands have been indiscriminately killed in all fashions and thousands are still in danger or in peril.

Additionally, survivors and victims lack basic requirements and have limited shelter, which the Iraqi government is obliged to provide. Living, sanitary, and health conditions, in the available shelters, are terribly poor and the Iraqi government has not provided the basic and adequate requirements to the civilians affected by the battle to retake Mosul where more than 3 million citizens, including those in the surrounding areas of Ninawa, have been displaced and are currently in very dire situations. In this instance, GICJ has called on the OHCHR to recognize the situation of internally displaced persons in Mosul and urged the High Commissioner’s Office to mobilize the competent UN bodies to provide adequate and necessary assistance to the 3 million internally displaced persons (IDPs) from Mosul and surrounding areas.

Failure of Iraqi government to protect:

In the letter to the OHCHR, GICJ re-iterated that during the “liberation” fight, and contrary to its public announcement, the Iraqi government has clearly shown that it has failed to abide by international law standards and has also failed in taking measures to protect civilians in providing them with means of safety during military operations.

Moreover, the Iraqi government (via the Prime Minister) asked inhabitants of Mosul not to leave the city1 while at the same time the Iraqi federal police, in many cases, has come out and said that inhabitants who stay in Mosul are supporters of ISIS. As authorities fail in providing civilians safe passages out of the city they are then caught in a catch-22 situation, as they fear attacks of ISIS as well as bombings, indiscriminate killings and shelling that devastates the way out of Mosul. Furthermore, should they attempt to escape the city by themselves they are attacked by ISIS or Iraqi forces, of whom the latter are meant to protect civilians.

Such actions together with whole day indiscriminate shelling of Mosul including severe bombardments by all types of missiles and artillery on a daily basis clearly demonstrates that the Iraqi government is incapable of protecting civilians and fully capable of further destruction. As well, the types of weapons used in such operations are clearly disproportionate in terms of use, methodology, and scale; for instance, coalition air forces conducted over 20,000 airstrikes over Mosul. Therefore, other immediate measures and steps need to be taken that are in accordance with international and international human rights law.

Civilians make up most of the casualties and as the situation worsens and the killings increase, Iraqi Units consider this as an indication that those who remain in Mosul are either ISIS members or are in some way associated with ISIS.

Furthermore, reliable information demonstrates that the Iraqi militia participates in illegal activities while wearing Iraqi police uniforms as has been documented numerous times in other GICJ articles, letters, and appeals2. The hundreds of footage and video that has been gathered shows them brutally torturing people from Mosul, making unfair accusations against them, and even killing the injured. Evidence was provided in GICJ’s previous letters sent to the OHCHR that illustrated the crimes and atrocities committed by Iraqi security forces and further re-iterated that these violations are being carried out under the guise and pretext of fighting ISIS3.

GICJ has also collected examples of the extreme and brutal tactics which include forcefully hitting the limbs of captives with a stone sledge hammer and civilians being blindfolded, tied, hanged, and tortured. While we condemn all forms of torture some of the footage gathered reveals the difference in scale of cruelty.

In a statement to state television, published on 11 July 2017, a member of the Iraqi Parliament, Hakim al-Zamili, head of the Iraqi parliament's security and defence committee, said that Iraqi forces had killed about 28,000 "ISIS" members during the liberation battles and military operations in Iraq. However, taking into account that most estimates of ISIS members in Iraq amount to no more than 7,000 members gives us no doubt that of the people killed many were civilians. He also said, "among those killed were 225 logistical support commanders, 400 field commanders and 130 first-line organizers of the organization in Iraq,” and that, "We have more than 4,000 detainees from some 86 nationalities, a large proportion of them from East Asia, Tunisia, Yemen, Egypt, Algeria, other Arab countries and European nationalities, and we have received serious security information threatening the countries of the region and the world.”

It is thus crucial for the United Nations to play an active role during the interrogation of the detainees; this will be important not only to Iraq but to all countries as well as the UN efforts in fighting terrorism. In this regard, GICJ calls onto the UN to appoint an expert with extensive background knowledge on the situation to take part in these procedures.

1. For example, on 16th of October 2016, government and coalition forces told residents, via dropped leaflets, to stay in their areas as they assured them that civilians would not be targeted. Later, the very areas were bombed by the Coalition forces.