On 29 June 2017, Geneva International Centre for Justice (GICJ) addressed a letter to the High Commissioner for Human Rights providing new evidence of the abysmal abuses committed by the Iraqi security forces in their fight against ISIS. The violations committed by the Iraqi governmental forces and their affiliated militias include torture, arbitrary detention, summary executions, and all forms of barbarous acts against alleged terrorists – who often are defenseless civilians.

As further evidence of the appalling crimes committed by the Iraqi forces, on 28 June 2017, the Swedish newspaper EXPRESSEN published a video (see link below) – with related article – showing Iraqi police officers beating, torturing and arbitrarily killing alleged ISIS fighters in Mosul. The shocking images show blindfolded men with their hands tied behind their backs beaten with whips and metallic cables, and suffocated by the soldiers.

Furthermore, the Swedish journalist interviews Mr. Falah Aziz – a member of the Iraqi police also known as the “beheader.” In the video, Mr. Aziz reveals to have beheaded 50 persons and to have killed 130 people in total. Moreover, on his Facebook’s profile picture, he appears to be holding up a bloody knife. Other videos show him walking around, with cheering Iraqi troops, carrying a severed head.

The disturbing video contains the evidence of the brutality and illegality of the actions of the Iraqi government and the Iraqi security forces. In fact, the prisoners – alleged terrorists –  who are killed and tortured do not receive a fair trial and are arbitrarily arrested and summarily slaughtered in the streets.

In its previous letters of 6 October, 16 November, and 21 November 2016, and 27 March, 24 April 2017, and 30 May 2017, Geneva International Centre for Justice had repeatedly denounced the brutality of the Iraqi security forces and had warned about the devastating impact that all “liberation” campaigns have on the civilian population. As GICJ outlined in all previous communications, the Iraqi security forces – supported by the pro-governmental militias and international coalitions – have acted in complete disregard of international humanitarian law and have committed heinous human rights violations during all campaigns. 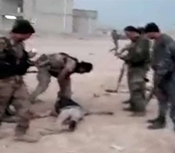 In fact, under the pretext of fighting ISIS and uncovering all ISIS affiliates, the Iraqi army – supported by the pro-governmental militias and by international coalitions – is indiscriminately targeting civilian households and properties, and is committing brutal abuses, including torture, rape, summary execution, enforced disappearance and extrajudicial killings. Unfortunately, the disturbing images published by the Expressen do not portray isolated incidents, but are the evidence of a common trend of behaviour of several units within the Iraqi forces. As highlighted in all previous communications, all actions of the Iraqi security forces and of their affiliated militias represent systematic and widespread violations of international humanitarian law and international human rights law.

In its letter of 29 June 2017, GICJ expressed its disappointment at the fact that the Office of the High Commissioner for Human Rights has been silent regarding the violations committed by the Iraqi security forces and the affiliated militias, and called on the High Commissioner to take a stronger stance against the abysmal abuses occurring in the country. Furthermore, as the Iraqi government has never lived up to its promises and has never investigated into allegations of violence at the hands of the security forces, GICJ urged the High Commissioner to do all in its mandate to ensure that independent and impartial investigations are carried out

Finally, GICJ insisted that the High Commissioner invite the international community and Iraq’s allies to immediately stop providing technical and financial assistance to the Iraqi security forces due to the fact that they are responsible of human rights violations, including torture and arbitrary killings.