This paper, firstly, provides a summary of the discussions that transpired at the interactive dialogue, taking into consideration the Special Rapporteur’s statement as well as the key issues raised by states and non-governmental organisations which participated. It will also discuss the position of Geneva International Centre for Justice (‘GICJ’) on priority issues and consider various matters raised in the discussion.

B. THE INTERACTIVE DIALOGUE

Presentation of the Report by Special Rapporteur, Michael Lynk

The Special Rapporteur presented his report at the 44th session of the Human Rights Council. His report focused on Israel’s continued use of collective punishment as a prominent instrument in its coercive toolbox for population control in the occupied Palestinian territories, despite numerous reports and reminders critical of its use. He highlighted that the most disfiguring and distressing measure of collective punishment is the 13 year long closure of Gaza, which has turned Gaza into an impoverished ghetto with a decimated economy and a collapsing social service system. He stated that collective punishment violates a fundamental principle of law that innocent people must not be punished for the wrongdoings of others and emphasized that, like torture, there are no permissible exceptions to the use of collective punishment. The Special Rapporteur condemned Israel’s annexation plans for parts of the West Bank, calling it a vision for a 21st Century apartheid with “two peoples living in the same space, ruled by the same State, but with profoundly unequal rights”. He recognised that in the prior annexations of East Jerusalem and Syrian Golan, the international community opposed the annexation plans but on neither occasion took appropriate countermeasures to stop the annexation. He called for the international community to take a different approach to Israel’s threats to annex parts of the West Bank. The Special Rapporteur also expressed regret that Israel has continued to refuse him access to the Occupied Palestinian Territory.

Israel was absent and therefore, did not take the floor to address the report of the Special Rapporteur.

The State of Palestine expressed disappointment with the international community for failing to take action against violations in the occupied territories since 1967. It condemned the United States “peace to prosperity” plan and called the international community to reject Israel’s annexation plans which have flowed from the US plan. Palestine stated that the planned annexation would constitute a war crime under Article 8 of the Rome Statute of the International Criminal Court. It further highlighted that the 13 year long closure of Gaza is among the worst forms of collective punishment and listed other forms of collective punishment in the occupied territories, including the demolition of Palestinian homes, and pillaging of Palestinian tax and monies. Palestine stated that collective punishment is prohibited under international law and called on Israel to put an end to the illegal occupation.

Some of the key issues touched on by states were the condemnation of Israel’s use of collective punishment, the illegal Gaza embargo and blockade, the demolition of Palestinian homes causing displacement, the illegal expansion of Israeli settlements, the illegal annexation plans for the West Bank, the persistent violation of Palestinians’ human rights, and the need to put an end to the illegal occupation since 1967. Several states called for constructive efforts towards the two-state solution based on pre-1967 borders and expressed their solidarity with the Palestinian people and their right to self-determination. Several states expressed their support for the Special Rapporteur and commitment to the continuation of the agenda Item 7 focused on the occupied territories. Several states welcomed the High Commissioner’s database of business enterprises operating in the occupied Palestinian territories and called for its annual update. 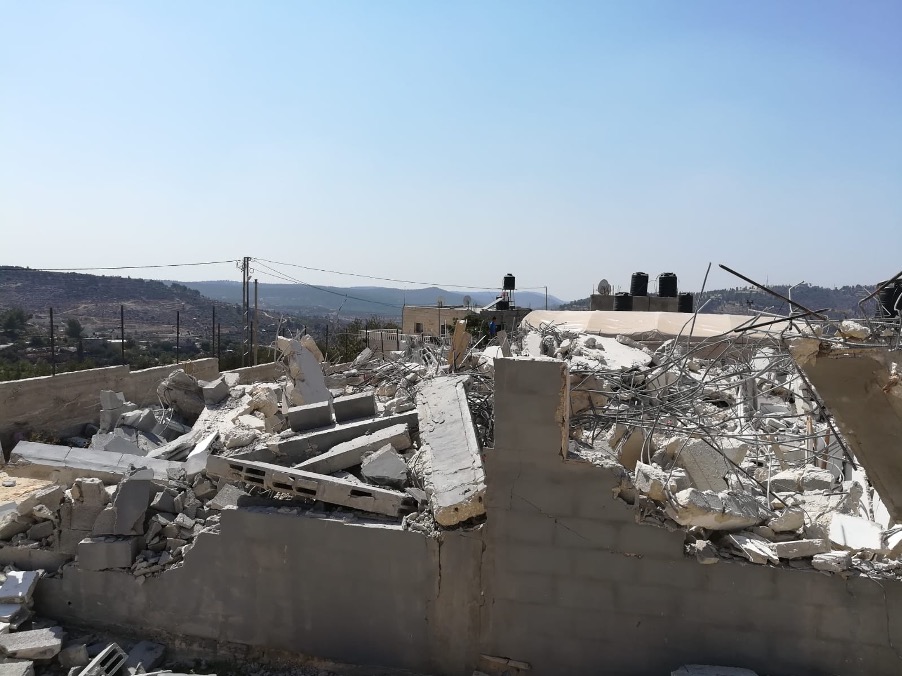 Demolitions of Palestinian homes have facilitated the expansion of Israeli settlements, and has left entire Palestinian families displaced. (Photo: GICJ, 2019)

Collective punishment has remained a key tool for Israel in suppressing Palestinians in the occupied Palestinian territories since the illegal occupation began in 1967. Innocent Palestinians continue to be punished without any wrong doing on their part. Palestinian homes have been demolished and Israeli justification for the demolitions are often based on family relations and association with alleged dissidents. Israeli authorities have executed demolitions in a manner that is arbitrary, repressive, and wholly unjust. Demolitions have facilitated the expansion of Israeli settlements, and has left entire Palestinian families displaced.

Israel’s 13 year long Gaza closure is inhumane and has rapidly deteriorated Palestinians’ quality of life, with many living in extreme poverty and in a crippled economy without any foreseeable prospect of recovery. Add to this the adverse impacts of COVID-19, the economic and social repercussions of the Gaza closure on Palestinians are amplified ten-fold.

GICJ further calls on states to take countermeasures against Israel’s continued illegal occupation of the Palestinian territories. The inaction by the international community has emboldened Israel to proceed with plans to illegally annex parts of the West Bank, following the United States’ irresponsible and illegal “Peace to Prosperity” plan. A forced unilateral annexation violates established international law, including the Charter of the United Nations, the Fourth Geneva Convention of 1949 and the Rome Statute of the International Criminal Court.

GICJ appreciates that all states that participated in the interactive dialogue engaged constructively, calling for Israel to end its ongoing and persistent violation of Palestinians’ human rights, including and beyond collective punishment. It is, however, concerning to note that certain non-governmental organisations challenged the very existence of the agenda Item 7, alleging that it is biased as it focuses on Israel. GICJ calls on the Special Rapporteur and states to dismiss these allegations as baseless. The focus of agenda Item 7 is not on Israel or the human rights situation in Israel. The agenda Item 7 specifically concerns the human rights situation in the occupied territories, which are beyond Israel’s borders established pursuant to UN General Assembly resolution 181.

GICJ extends its continued support to the Special Rapporteur and encourages him to continue his diligence and commitment towards fulfilling his mandate. We further call on the international community to take appropriate action against Israel should they proceed with their plans to illegally annex parts of the West Bank. GICJ remains steadfast in the pursuit of justice for Palestinians, towards guaranteeing their right to self-determination by putting an end to the illegal occupation since 1967, liberating them from suppression.