On 17 March 2017, the Meezaan Organization for Human Rights-Nazareth and Geneva International Centre for Justice (GICJ) co-organized, with the participation of the International Organization for the Elimination of All Forms of Racial Discrimination (EAFORD) and International Lawyers, a side event entitled “Israeli Settlements and Violence in the Occupied Palestinian Territories and Israel”.

The side event examined the interlinkages between Israel’s overall policy of Judaization in historic Palestine, hence in Israel and Occupied Palestine with a focus on the West Bank and the Negev, particularly through unabated settlement construction. While Israel’s settlement activities are in grave breach of international law and its systematic and discrimination against Palestinians on both sides of the Green Line violate Palestinians’ most fundamental human rights, the Palestinian plight is compounded by the drastic increase of violence committed by Israeli forces and settlers throughout the past years. 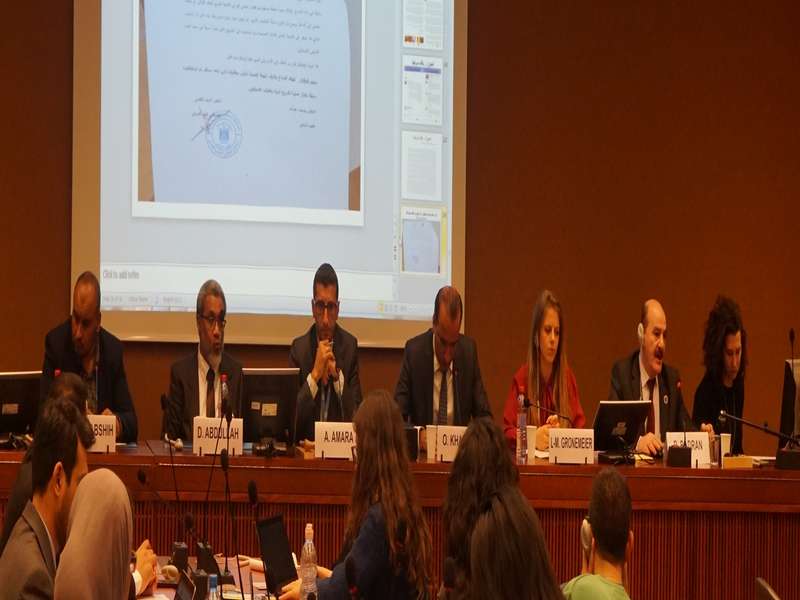 Omar Khamaisi is the director of Meezaan Organization for Human Rights. He is a human rights lawyer and a graduate of Amman University. At the side event, Khamaisi represented various politicians and Palestinian families who lost their sons in the conflict.

Naser Abuhammoud Dawabshih took part in the panel as of the Dawabshih Family and the Palestinian village of Duma, which has been a particular target of violent attacks by Israeli settlers. He has lost several relatives as a result of settler violence and his village is under a constant threat of oppression, dispossession, and violence on the part of the Occupying Power.

Ra’afat Badran is the father of 15-year-old Mahmoud Badran who was killed by Israeli forces. He is from the Palestinian village of Beit Ur Al- near and had spent 15 years in Israeli prisons, from the year 1985 until the end of 1999. On the 21st of June 2016, he lost his son, the child Mahmoud Arafat Badran, who was fifteen years old.

Daud Abdullah is the director of the research institute Middle East Monitor. He is a renowned British and political and social commentator. In his writings and lectures, he focuses on Middle Eastern and British politics, Islam, and Muslim-Western relations. He is the author of several books, including “A History of Palestinian Resistance” (2005), has made substantial contributions to other publications, and has written numerous articles on Palestine published by newspapers such as the Guardian and Al Jazeera.

Lisa-Marlen Gronemeier from GICJ holds an MSc degree in Social and Cultural Anthropology from of Amsterdam. She focuses on topics such as power/ resistance, structural violence/ grassroots activism, asymmetrical conflict, Selfing/Othering and identification processes in conflict, and the expansion of public spaces for sociopolitical change. She has conducted a three-month fieldwork project in Palestine.

Ahmad Amara is the Legal Adviser of Meezaan Organization for Human Rights, a Human Rights Lawyer and a graduate of NYU, Essex University and Tel-Aviv University, and serves as a part-time lecturer at Bir-Zeit University and a postdoctoral fellow at Hebrew University. Amara focuses in his research on the legal and social history of the Beersheba region, on Ottoman and British land law, and on waqf lands in Jerusalem. He has a number of publications on the subject. 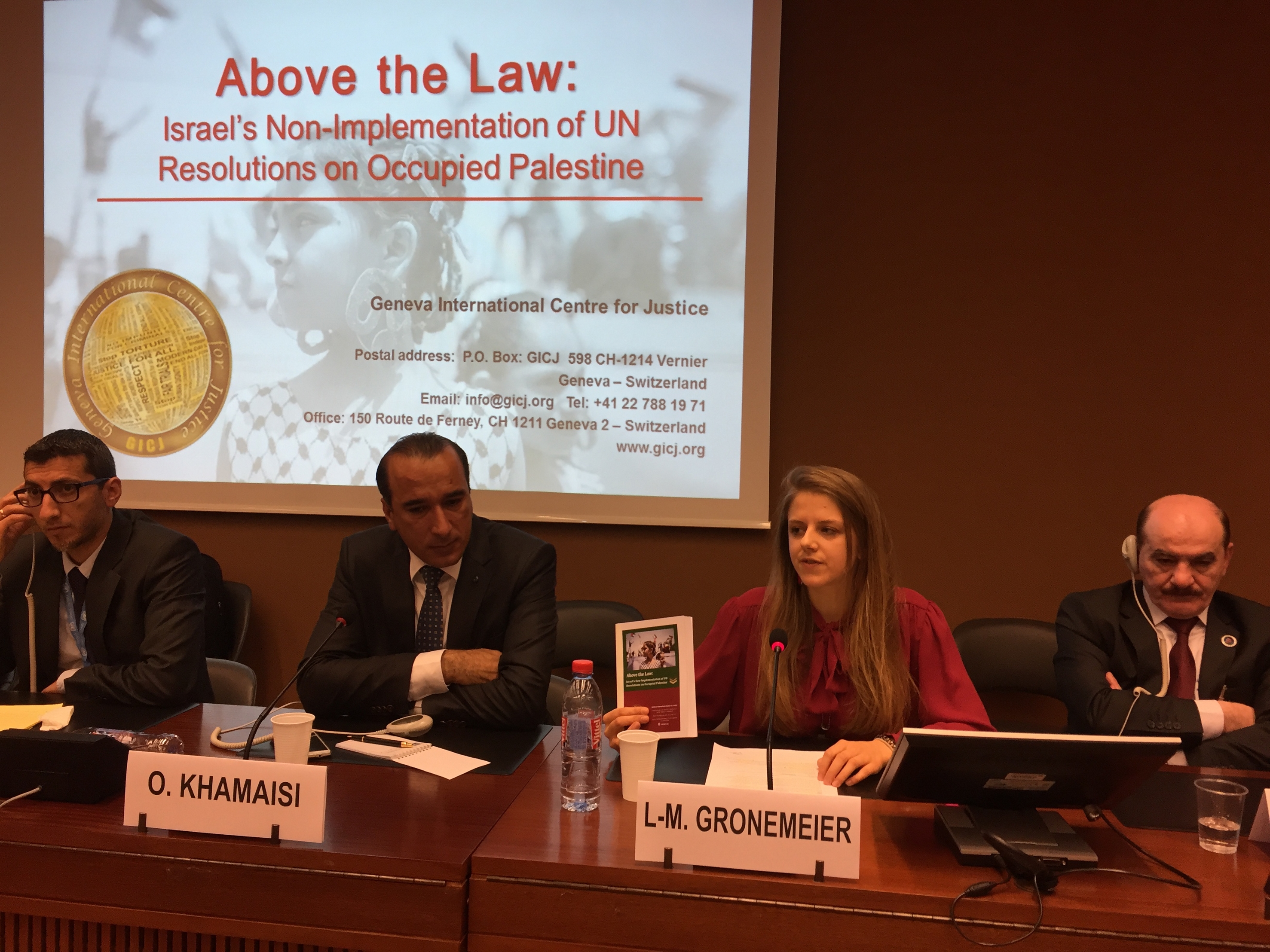 Omar Khamaisi gave a brief opening note to the side event by stressing the latest Israeli extreme policies of violence and persecution of political leaders.

Ahmad Amara in his opening remarks the intricate link between Israel’s ongoing settlement policy within present-day Israel, especially in the Negev, and Occupied Palestine, including East Jerusalem, and the violence committed by Israeli settlers and occupying forces. Since the establishment of Israel, Israeli authorities have been pursuing a policy of Judaization, thereby forcing the indigenous Palestinian their lands. The evidence of settler violence and of excessive use of force against Palestinians, including children, by Israeli soldiers is overwhelming and often results in death or injury. Amara stressed the connection between projects of and the associated regime of violence and that allow for the displacement and dispossession of Palestinians. Under the moderation of Amara, the speakers shed light on core issues of the subject matter.

Naser Abuhammoud Dawabshih’s contribution revealed the magnitude that settler violence takes in Occupied Palestine. Less than two years ago, members of Dawabshih’s family from the Palestinian village of Duma were brutally murdered by criminal Israeli settlers from a nearby illegal settlement. 18-month-old Ali, his brother Ahmed, father Sa’ad, and mother Reham were sound asleep when the Israeli settlers threw Molotov cocktails, setting fire to the family home the night of 31 July 2015. When the fire took over the house, the parents tried desperately to rescue their children but could only rescue Ahmad, while toddler Ali was burned alive in the fire. Both parents later succumbed to their injuries, leaving the permanently injured Ahmad orphaned. Ahmad had sustained burns on 60 percent of his body and suffered tremendous psychological consequences. Today, the little boy wants to join his brother and parents in .

Dawabshih stressed that accountability remains absent for the atrocious murder of the family members. Crimes by settlers are committed with impunity as perpetrators are not persecuted. This attack has deepened the plight of the family, which has fallen victim to many settler attacks in the past, which render life almost unbearable. The family has been subjected to constant humiliations, violence and discriminatory acts by settlers and occupying forces. In the light of this, Mr. Dawabshih stressed that the arson attack on his family was not the first crime by the settlers and will not be the last if the international community does not take immediate measures to hold Israel accountable, to cease its violations and prevent violence by settlers and soldiers, and to conduct investigations and guarantee accountability for illegal actions.

Ra’afat Badran recounted the atrocious killing of his son Mahmoud Arafat Badran. Mahmoud was among a group of young Palestinian friends from Beit Ur Al- village, Ramallah, who had spent the evening playing and swimming at the Leen Land park and swimming pool in the nearby Beit Sira village on Monday, 20 June 2016. They set off for home around 1.30 am. Around ten minutes later, as they were approaching the bridge of a road exclusively allocated to settlers leading to Beit Ur Al-, Israeli forces targeted their car with heavy shooting, which only stopped when the car hit the wall of the bridge.

This horrendous act resulted in the death of 15-year-old Mahmoud Badran. Four others, among them three children, were injured and two children and their mothers were arrested by the occupying forces. Pursuant to the spreading of the news of the incident, people moved to the location of the crime scene to ensure the safety of the children. However, the Israeli military prevented access to the location and blocked the entry of ambulance cars affiliated with the Palestinian Red Crescent, thereby preventing them from providing aid and assistance to the injured that had bleeding wounds.

The speaker added that Israeli press was prohibited from publishing reports about the incident after it became clear that it involved children. Surveillance cameras set on the main roads later showed that there had been no threat – hence no possible justification for announcing fire. In spite of this, no follow-up investigation, trial and persecution of those who committed this crime has taken place until today. The case exemplifies Israel’s shoot to kill policy towards Palestinians. Thus, this became just another forgotten case of murder – among many others.

Badran expressed that Mahmoud was the first male child that he brought to life after spending 15 years in prison. He was the first joy to his father. Mahmoud has a younger sister of nine years and a brother, whose thirteenth birthday was approaching. The family was deeply affected by the absence of Mahmoud and spent their son’s birthday crying incessantly.

In the end of his contribution, Badran reflected that Mahmoud was a normal child with ambition and talents. The boy was filled with joy and life – there is not a single photo of him not smiling. He was dreaming of becoming a doctor for athletes and aspired to work for Real Madrid, which he admired. Live ammunition had ended this child’s dream and had left his family with a grain of sand that they to visit every time they miss his memory.

Daud Abdullah explained that the Human Rights Council (HRC) and International Criminal Court (ICC) can hold tribunals and ensure accountability for the commitment of violations. However, some Member States employ these platforms for their own privilege, thereby the effectiveness and legitimacy of these bodies. that war crime suspects hold high positions in these platforms, Abdullah questioned whether we have real chances for justice. In particular, several actors and entities seek to undermine specific issues, such as occupied Palestine, in these forums. In the light of this, Abdullah recommended open debate on free platforms for the young.

Moreover, the speaker countered the notion of Israel as “the only democracy in the Middle East”, which is held by some Westerners. He underlined that it is the failure of democracy that gives way to apartheid, fascism, and Nazism as witnessed in the 1920s. In his concluding remarks, Abdullah stressed the necessity to hold accountable those committing crimes of such magnitude to prevent total chaos.

Lisa-Marlen Gronemeier introduced the report “Above the Law: Israel’s Non-Implementation of UN Resolutions”, commissioned by GICJ. On occasion of half a century of Israel’s brutal occupation of Palestine and seven decades since the 1948 Palestinian Nakba, the GICJ report assesses Israel’s implementation of resolutions concerning Palestine and Palestinian inalienable rights issued by the main UN bodies from 1948 to 2017. Gronemeier noted that the report focuses on the following six selected thematic areas, which are periodically addressed in UN resolutions:

Due to the length of the full assessment, Gronemeier focused on the second, hence the legal, geographic and demographic status of Occupied Palestine. After having outlined the central findings of the report, id est that Israel has blatantly violated all UN resolutions its illegal activities and their dire consequences Palestinians’ rights, Gronemeier explored the link between Israel’s colonialist and segregationist actions and consistent human rights violations. In the concluding statement, Gronemeier outlined the argument of the report that the system of occupation and apartheid, and of discrimination against ethnic and political minorities within Israel, must be disassembled to give way to real democracy and peace in the region for the benefit of all citizens. While the unrelenting efforts by to introduce necessary forcible measures through the Security Council to make Israel comply with its international obligations were time and again blocked by the veto of the US, GICJ strongly believes that without taking required forcible measures in accordance with Chapter VII of the UN Charter, Israeli violations will continue.

At the end of the side event, the Moderator concluded with final remarks. Afterwards, the floor was opened for questions and comments by the audience.