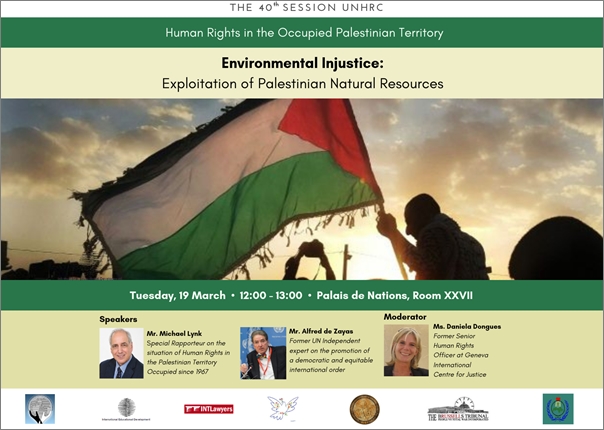 Mr. Michael Link, Special Rapporteur of the situation of Human Rights in the Palestinian Territory Occupied since 1967.

Over the decades of occupation, the Palestinian people have been systematically deprived of their land, including the attendant natural resources and environmental quality. Land confiscations, barrier walls and maritime security zones have all limited the ability of Palestinians to enjoy the full measure of the natural resources that are a part of the occupied territories. In the case of the West Bank specifically, the UN Special Rapporteur on the Occupied Palestinian Territories put it plainly when he said that the natural resources “are largely controlled by Israel and primarily exploited for its benefit.” 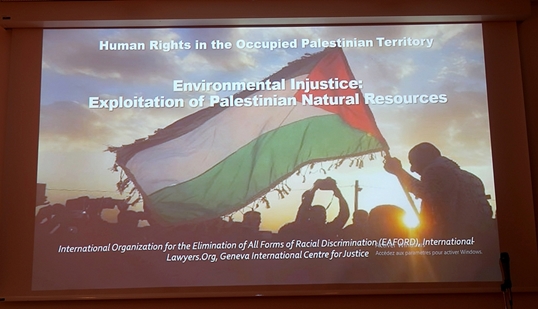 In addition, Israeli businesses, citizens, and government actors are responsible for significant environmental pollution that has caused severe health impacts and loss of livelihood for thousands of Palestinians. Local data show elevated incidents of serious health problems, such as cancer, in areas subjected to serious air pollution, toxic waste, and the like. The continued presence of these pollutants causes cumulative effects leading to long-lasting environmental damage and long-term health problems for current and future generations of Palestinians.

This event explores the nature of the issue and the prospects of addressing the problem at the international level.

The moderator, Ms. Daniela Dongues, opened the side event by introducing the speakers and highlighting the critical importance of the issue of natural resources for the Palestinian Territories.

In his presentation, Mr. Lynk drew a clear picture of the situation of the environment, water and natural resources in the Occupied Palestinian Territories. Israel, the occupying power, is violating its obligations in several aspects. As a result, millions of Palestinians are living in an environment increasingly marked by degradation. He offered several examples of the degradation of the environment and living conditions in Palestine, including destruction of Palestinian water plants by the Israeli government and West Bank olive trees destroyed by Israelis.

Mr. Lynk explained that the 1995 Oslo agreement establishing the Joint Water Committee and regulating water access in the Territories was overwhelmingly in favor of Israel, as it provides Israel with a right to extract 80% of the water from the aquifer, with only 20% available to the Palestinian Authority. As a result, Mr. Lynk said that despite the steadily increasing Palestinian population, Israelis consume 250 liters per capita per day while a single Palestinian only uses 84 liters per day. Instead of marking the beginning of bilateral cooperation over water resources, Mr. Lynk described the 1995 Oslo Agreement as a form of domination by Israel over Palestinians in which the Palestinians not only acquiesce to Israeli demands but effectively "consent to their own colonization." 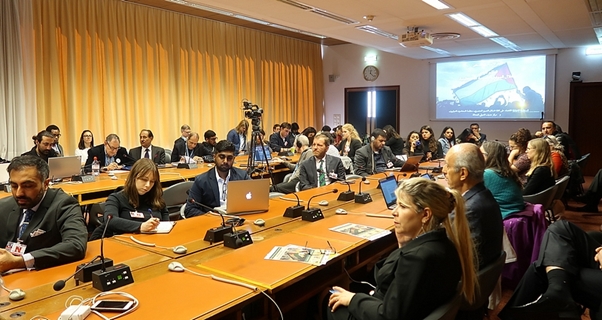 In Gaza, he explained that the coastal aquifer, the only natural source of drinking water in Gaza, has collapsed and become substantially contaminated. With more than 96% of water in the coastal aquifer no longer safe for human consumption, the water crisis in Gaza is verging on a humanitarian catastrophe. Damage to the aquifer will be irreversible in the next few years if substantial measures are not taken immediately. Mr. Lynk also noted that the water problem is also contributing to a significant health crisis among the two million Palestinians living in Gaza. As an example, water-related diseases are the primary cause of child morbidity in this area. 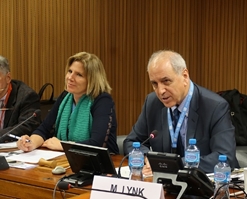 Another significant example of Israeli exploitation of Palestinian natural resources is quarrying. Mr. Lynk explained how, in the West Bank, Israeli quarry companies extract approximately 17 million tons of stone annually, almost all of which are destined for the Israeli local market. This is despite the strict prohibition under international law for a military power to economically exploit an occupied territory. Israel has granted several mining concessions to Israeli-operated companies in Palestine, activities which have received the approval of the Israeli Supreme Court.

Ms. Dongues confirmed the description of the water catastrophe in Palestine by describing the destruction of water pipelines in a Palestinian village by Israelis, which she witnessed with her own eyes. The expropriation of Palestinian natural resources constitutes a de facto annexation, which is further corroborated by the fact that many Israeli politicians are explicitly calling for the annexation of Palestine. For many Israelis, Palestine has effectively ceased to exist. 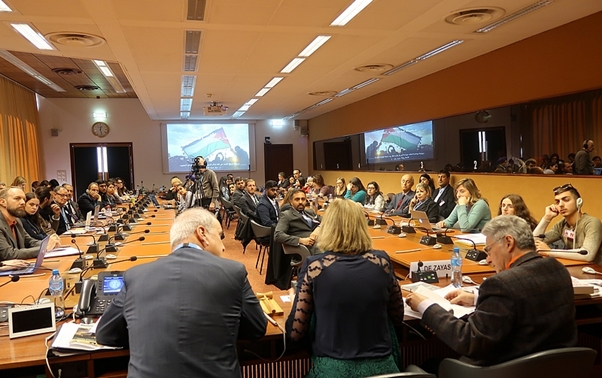 Mr. de Zayas began his remarks by stating simply: there is no follow-up procedure to the reports of UN Special Rapporteurs. During his career at the United Nations, Mr. de Zayas presented 14 reports to the Human Rights Council and the UN General Assembly. He said he submitted in 2014 a report to the UN General Assembly on the issue of self-determination, which includes sovereignty over natural resources. This right to self-determination belongs to all people, including Palestinians.

He explained that after 52 years of violations of Security Council Resolution 242, there is still no enforcement because of the US veto. However, it would be possible to bring the issue before the International Court of Justice (ICJ). Instead of focusing on a particular issue, like the separation wall, the UN General Assembly could request an advisory opinion on the legal consequences of the continued occupation. He suggested the General Assembly could ask the Court to address the illegality of the blockade, the theft of Palestinian natural resources, which constitutes a crime under article 7 of the Rome Statute, and the level of reparations due to Palestine. 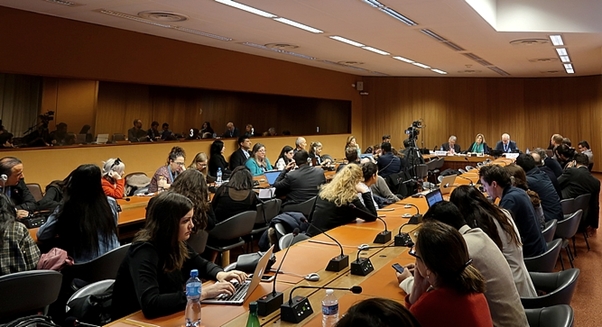 Mr. de Zayas said that in the US there is not sufficient awareness about the scale of suffering in Palestine. The impression from many US newspapers is that Palestinians are a bunch of terrorists and it is their own fault if they find themselves in this situation. He believes this is a kind of defamation of all people. 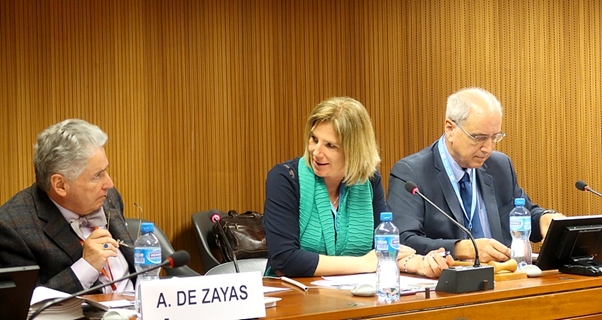 After the speakers concluded their presentations, the moderator opened the floor to questions from the attendees. She took several questions and then asked the speakers to respond. Attendees posed the following questions:

1.    Would renegotiating the previous water agreements be useful given the current power imbalance between Palestine and Israel?

2.    Are you aware of the dire situation of Palestinian refugee camps in Lebanon?

3.    Can you elaborate more on the desirability of a new advisory opinion by the ICJ? 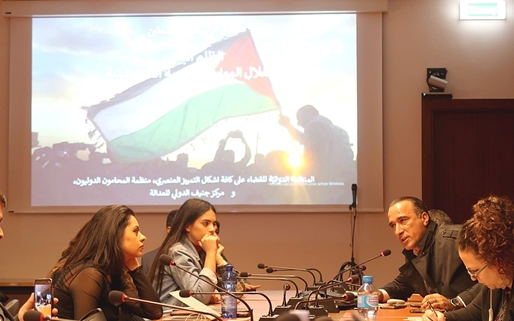 In response to the water issue, Special Rapporteur Mr. Lynk noted that the current water agreement was expected to only last five years until a final agreement was negotiated that covered all issues fully; it should have been renegotiated in 1999. Now, 20 years later in 2019, these outdated agreements trap Palestine in an unfair situation. These agreements must be renegotiated in order to grant to the Palestinians more access to their own water. 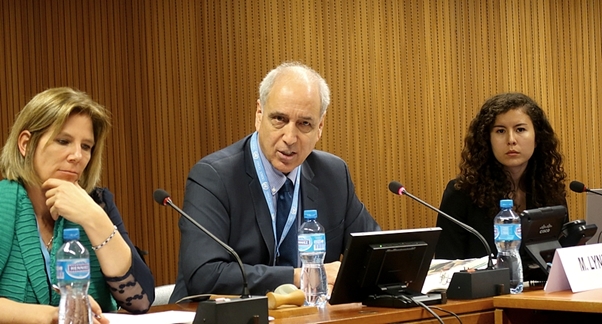 Regarding the refugee camps in Lebanon, Mr. Lynk described visiting them, and agreed that Palestinians live in extreme poverty there. The UN agency that supports the camps is suffering in terms of financial resources because the US government has entirely cut its funding to the Agency. (However, Mr. Lynk noted the worst camps are the ones in Syria.) Lebanon has not ratified the 1951 Convention on the Status of Refugees, and has not provided full rights to the Palestinian refugees. Lebanon denies the Palestinians access to employment. Mr. Lynk said they are entitled to a life of dignity even as refugees.

On the suggestion for a new advisory opinion from the ICJ, Mr. Lynk noted that in a past report he had explored the issue of whether Israel should still be considered as a lawful occupant. To answer these questions, one must consider that under international humanitarian law, the occupied power should only act as the administrator of the occupied territory. This means the occupying power must act in good faith as a trustee to provide for sustainable use of natural resources and protect the territory’s natural wealth. The occupying power must also respect the prohibition on the transfer of civilian population.  As a result, Mr. Lynk said Israel can no longer be considered as a lawful occupant because it is not administering the territories in good faith, it is not obeying the strict rule of prohibition of annexation and transfer of population, and it is not providing for a sustainable use of natural resources and the preservation of the environment. Not only the settlements, but the whole occupation, is illegal in his view, a position that he believed is well supported by legal precedent from the ICJ. 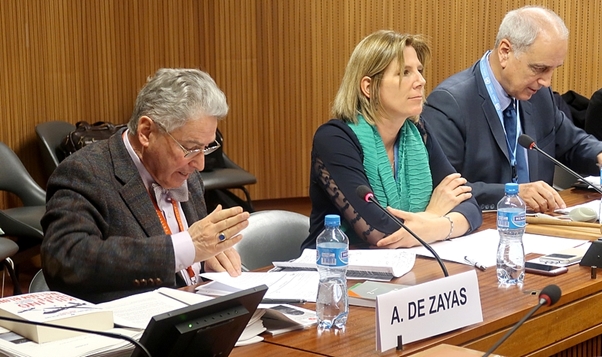