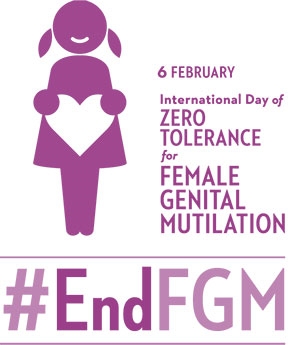 Around 140 million women and girls live with the consequences of some form of FGM. The practice is most common in west, east and north-east Africa, some regions in Asia, and some regions in the Middle East. Annually, 3 million girls are at risk of being cut. While FGM has no health benefits, it harms girls and women multiple ways. Short-term risks include severe pain and shock, haemorrhage, tetanus and sepsis. Long-term consequences include infertility and increased risk of complications during childbirth and new-born deaths.

FGM is classified into four types:

•    Clitoridectomy, which entails the partial or total removal of the clitoris and sometimes the prepuce (the skin surrounding the clitoris).

•    Excision: the partial or total removal of the clitoris and the labia minora.

•    Infibulation. With infibulation, the vaginal opening is narrowed through a covering seal. This seal is often formed by repositioning the inner or outer labia. Infibulation could include the removal of the clitoris.

•    Any other harmful procedures to the female genitalia, such as cauterizing, incising and scraping.

On 1 July 2016, the UN Human Rights Council adopted a Resolution on the elimination of female genital mutilation (A/HRC/32/L.31/Rev.1) condemning the practice and calling for policy change. It states, for example, that ‘female genital mutilation is a form of discrimination, an act of violence against women and girls and a harmful practice that constitutes serious threat to their health, including their psychological, sexual and reproductive health’. This resolution not only recognizes FGM as an act of violence against women and girls, but also calls upon the UN Member States to strengthen the education of children, parents and religious, traditional and community leaders on the perils of the practice. Additionally, it urges the Member States to engage men and boys in education surrounding FGM, and to consequently involve them in awareness-raising campaigns. The Resolution furthermore urges all the States to adopt national legislation prohibiting FGM alongside the development of educational programs to decrease the negative stereotypes surrounding FGM, and to increase the circulation of information on the risks of cutting.

In many communities, FGM is a social custom and an integral part of the entrance of womanhood. It is closely linked to beliefs about premarital virginity and marital fidelity, but also about ideas of the woman as modest and ‘clean’, thus reasserting a limited and oppressive notion of proper sexual behaviour.  It is often assumed that FGM is performed on girls and women out of religious obligation. Paradoxically, however, no religion explicitly requires FGM. Instead, the practice is mostly based in a communal fear that uncut girls will not be able to marry, due to the aforementioned notion of uncleanliness and lack of modesty should a girl be uncut. This thus suggests that breaking the taboo surrounding FGM and spreading information about the detrimental effects of FGM in order to change the public’s opinion will be the best way to stop the practice.

United Nations Population Fund (UNFPA) and the United Nations Children’s Fund (UNICEF) jointly lead the largest programme fighting FGM. They are currently active in 17 countries on the African continent, while supporting multiple regional and global initiatives. This Joint Programme has helped 2.3 million girls and women by protecting them from FGM or by providing them with specialized care. Additionally, the programme directly contributes to tightening the legislation around FGM in Gambia, Guinea Bissau, Kenya, Nigeria and Uganda. The programme consists of strengthening the health services and making them more widely available for victims in order to allow for timely treatment of complications. UNFPA and UNICEF work together with civil society organizations that fight to ban FGM through education based in the community and centred on dialogue. Together, the organizations turn to religious and traditional leader to spread awareness about the dire health risks as well as the gravity the violation of rights FGM constitutes. Lastly, the programme targets the public through media to change the public’s idea of girls who remain uncut and to spread factual information on the practice.

GICJ calls on the international community and the relevant UN bodies to ban FGM and protect the rights of women and girls everywhere. Additionally, GICJ calls on legislators to ban FGM and to tighten the judicial framework enabling the practice. Lastly GICJ encourages independent initiatives as well as government authorities to provide support and health services to those in need as a result of FGM. 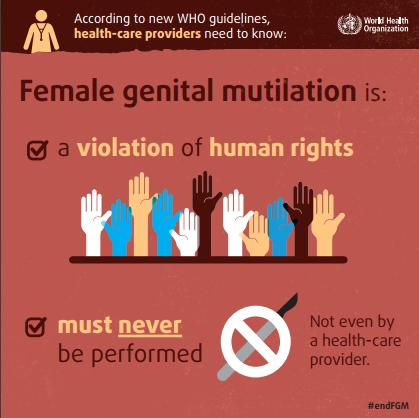