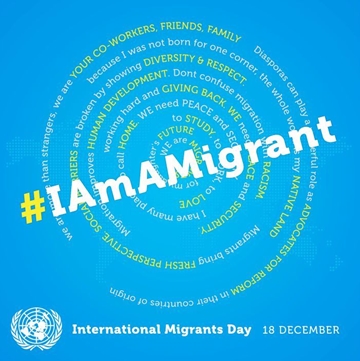 The International Convention on the Protection of the Rights of all Migrant Workers and Members of Their Families recognizes the vulnerable position of migrants and aims to protect them. The Convention, adopted on 18 December 1990, establishes the basic rights of all migrant workers that can be applied universally and thereby creates an international norm for the treatment of international workers.

-    Right to liberty and security of person,

-    Right to freedom of expression,

-    Right to freedom of thought, conscience and religion,

-    Right to equality with nationals of the State concerned before the courts and tribunals, medical care, social security and remuneration,

-    Right to the protection and assistance of the consular or diplomatic authorities of their State of origin or of a State representing the interests of that State whenever the rights recognized in the present Convention are impaired,

-    Right to name, registration of birth, nationality and education for each child of a migrant,

-    Protection against forced or compulsory labour, slavery and servitude,

-    Protection against arbitrarily deprivation of property,

-    Protection against random expulsion from the State of employment.

It is not only in conventions specifically on migrants, however, that the importance of their position and the protection of their rights is emphasized. As the number of international migrants is only expected to rise in the coming years, the 2030 Agenda for Sustainable Development. The Agenda is an UN initiative in accordance with its Charter, to promote prosperity for people and the planet. The Agenda stresses the complex situation of migration and calls on countries for the implementation of planned and well-managed migration policies as to abolish human trafficking, establish respect for human rights and to create migration policies to protect all those who choose to move.

In today’s increasingly international and connected world, the number of international migrants is rapidly growing. According to the United Nations (UN) the number of migrants worldwide increased with 41 percent from 175 million in 2000, to 244 million in 2015. This presents the societies to and from which people migrate with not only opportunities, but also challenges. International Migrants Day calls for more attention of communities everywhere for the situation of migrants as to create a safe and humane environment for those who make the courageous decision to search for a better life elsewhere.

On 19 September 2016, the United Nations General Assembly held the first ever summit on large movements of refugees and migrants during which a set of commitments, known as the New York Declaration for Refugees and Migrants (NY Declaration), was made. With the aim of protecting migrants against exploitation, human rights violations and discrimination, the NY Declaration is the international commitment to the safety of migrants everywhere.  As mentioned in the Declaration, it aims ‘to save lives. Our challenge is above all moral and humanitarian. Equally, we are determined to find long-term and sustainable solutions. We will combat with all the means at our disposal the abuses and exploitation suffered by countless refugees and migrants in vulnerable situations.’

According to the United Nations Department of Economic and Social Affairs, 16 million Indians and 12 million Mexicans were living outside their state of origin in 2015, making those the two countries with the highest number of migrant workers. Other countries with a high number of migrants include Russia, China. Bangladesh, Pakistan and Ukraine. Nearly half of all migrants are of Asian origin. As of 2015, the United States of America (USA) hosts the majority of migrants, followed by Germany, Russia, Saudi Arabia, the United Kingdom (UK) and the United Arab Emirates (UAE).

Women and children most vulnerable to trafficking, abuse and exploitation, as reported by the Global Migration Group (GMG). Additionally, one out of ten migrants are children under the age of fifteen. Where accompanied children experience serious institutional, social and psychological barriers, unaccompanied minors or minors without documentation experience an even higher level of risk of sexual exploitation, forces labour, violence and abuse, child marriage and captivity. According to Eurostat and the International Labour Organization (ILO) children make up more than one third of the forced labour victims worldwide.

Unaccompanied minors often experience a low standard of social services in their state of employment due to disadvantages stemming from discrimination, xenophobia and racism, relative poverty, language barriers, unequal rights and the lack of integration policies. Even though the child migrant is subject to multiple high-risk situations, a growing number of children are left behind by one or both parents or caregivers, often leaving them without any protection or parental guidance. These so-called ‘protection gaps’ are highly detrimental to the development of the child and endanger her or his chances of a safe upbringing.

Considering these risks, UNICEF calls for six actions to be taken immediately to protect migrant children:

-    Help uprooted children to stay in school and stay healthy,

-    Keep families together and give children legal status,

-    End the detention of refugee and migrant children by creating practical alternatives,

-    Press for action on the causes that uproot children from their homes,

The international community, international organizations, national governments and regional stakeholders play a huge part in achieving these six goals. International Migrants Day contributes to this by raising and spreading awareness.

GICJ acknowledges the value of migrants to their host countries and admires the courageous decision of people all over the world to migrate. However, GICJ underlines the importance of the protection of the rights of migrants, and condemns violations of these rights. Especially migrant children, unaccompanied or accompanied, should be treated with the utmost care and consideration as to safeguard their rights, and thereby their chances of a safe and happy childhood.