Iraq’s parliament is to vote on new legislation that would legalize child marriage in the country. The proposed amendments to the Personal Status Law that could allow girls as young as 9 marry has been approved “in principle” by Iraq’s House of Representatives on Wednesday, 1 November 2017. The proposed changes, which would significantly lower marriage age and promote polygamy, have been met with strong opposition from within parliament and from a nationwide coalition of civil society groups. Critics have described the proposed modifications as “assassination of childhood” or “female infanticide” and fear that they will stir sectarian tensions by imposing religious jurisprudence on all Iraqis. It would implicate that, instead of the civil court, religious leaders would decide on legislature pertaining to all issues related to women’s rights and family affairs in accordance with the jurisprudence of their respective sects. Geneva International Centre for Justice (GICJ) is dismayed at persistent attempts by conservative blocs to impose strict legislation that undermines the constitutional pillars of gender equality, the rights of the child, and fundamental freedoms and threatens to exacerbate sectarian tensions.

At a time when the last major ISIS strongholds have been taken back by the Iraqi government, the proposed legislation raises doubts about provisions that appear to be reminiscent of those followed by the extremist group. The passing of the law would constitute a devastating and discriminatory step backward for Iraqi women and girls. Furthermore, it would contravene Iraq’s constitutional guarantees for freedom of religious belief.

The proposed amendments undermine the current provisions of the Personal Status Law (Nr. 188) of 1959, which defines 18 as the official marriage age and is considered one of the most advanced laws in the region with regards to women’s rights and the rights of the child. The changes would also facilitate polygamy as men are no longer required to seek a judge’s permission to marry multiple wives.

The 1959 Personal Status Law grants women equal rights with men and builds on the fundamental principle of citizenship on which the Iraqi modern state was founded nearly 90 years ago. The suggested legislation would subvert these provisions, instead violating women’s most fundamental rights and classifying Iraqis on a sectarian basis. Additional to violating fundamental child protections enshrined in the U.N. Convention on the Rights of the Child, which Iraq ratified in 1994, the provisions would gravely undermine women’s human rights and run counter to UN Security Council’s landmark Resolution 1325 on women, peace and security, which calls for the protection of women and girls in conflict zones and for women to be involved in decision making on security issues – adopted by the Iraqi government in 2015.

GICJ firmly reiterates that child marriage or marriage without the free and full consent of both spouses is a violation of human rights and contravenes fundamental provisions of international law, including those enshrined in:

While the CRC sets the minimum age of marriage at 18 years, CEDAW obligates States to guarantee, on the basis of equality between men and women, the right to freely choose a spouse and enter into marriage only with free and full consent.

Over the years, religious parties have periodically proposed amendments targeting the existing Personal Status Law. During the first year of the U.S.-led occupation of Iraq, the Governing Council discussed a law Nr.137 in December 2003 – suggested by its president at that time, Abdulaziz Al Hakim, who was also the leader of the so-called “Supreme Council for the Islamic Revolution in Iraq” (SCIRI) –, which was to replace the Personal Status Law (Nr. 188). It provided for the relocation of responsibilities for all issues related to women’s rights and family affairs from the civil court to religious leaders, who would take the relevant decisions in accordance with the jurisprudence of their respective sects. This and numerous other attempts, such as a personal status law based on Jaafari jurisprudence solely for the Shia population, hitherto failed to get final approval.

Until today, child marriage is strictly illegal in Iraq. Nevertheless, approximately 1 in 4 Iraqi girls have been found by a 2011 UNICEF study to be married before the legal age of 18, often as a result of poverty and entrenched social and religious traditions. The revised law would enable official court registration procedures and make the numbers of child and polygamous marriage soar. This step is highly contentious especially because it would impose religious jurisprudence on all Iraqis for personal status issues, comprising marriage, divorce, adoption and inheritance – which would be decided on by the respective religious leaders. The persistent attempts by conservative –predominantly Shia – blocs to impose strict legislation threatens the constitutional pillars of gender equality, the rights of the child, and other freedoms and may exacerbate ethnic, sectarian and political tensions among the Iraqi population.

Taking to the Streets

The recently proposed amendment has sparked widespread opposition and protest in Iraq. Several members of parliament have uttered harsh criticism of the law, describing it “sectarian” and “unconstitutional”. MP Intisar al-Jabouri from the parliamentary committee on women and children stated: “This amendment is a setback for the rights of women and works to dismantle the family and to establish sectarianism even within the family”. Meanwhile, MP Farah al-Sarraj underlined that the law “will consecrate the laws introduced by ISIS, and violate international human rights laws”. The personal status law is widely held to deepen the divides within Iraqi society, undermining the government’s claims to uphold equal rights for all. This in turn may lead to more unrest among parts of the Iraqi population, which could be exploited by extremist groups such as ISIS.

Protestors have flogged into the streets of Baghdad to voice their opposition. Carrying banners and chanting slogans, they called out against what they define as “the assassination of childhood”, “female infanticide” or even as “crime against humanity because of the severe physical and psychological suffering it often entails”. 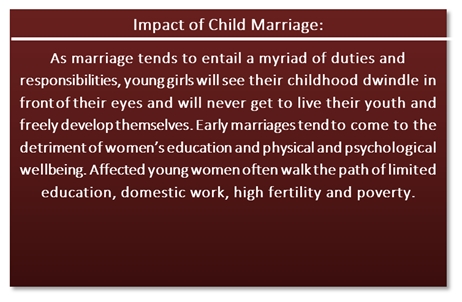 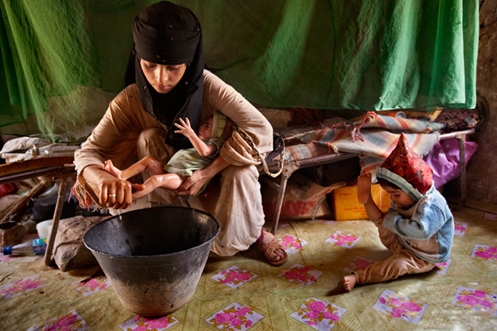 Opponents particularly emphasize that the law would roll back on women’s equal rights with men, as enshrined in the 1959 legislation, and on the constitutional principles of citizenship, which risk to be replaced by sectarian provisions. Among the fiercest opponents to the new legislation is a coalition of Iraqi civil rights activists and NGOs, which has recently taken to the streets protest the attempt to curtail civil liberties. The move to legalize child marriage follows in the footsteps of a proposal by conservative lawmakers to regulate press freedom, the right to free assembly, and the right to hold public demonstrations – freedoms that are guaranteed under Article 38 of the Iraqi constitution. Many Iraqis are also expressing their opposition on Twitter, where the hashtag “no to the new status law” is spreading like wildfire.

In the light of the grave infringements by the proposed legislation on gender equality, the rights of the child, and other fundamental freedoms and in view of the severe threat the amendments pose to the social fabric of Iraqi society and peace in the country, GICJ urgently calls on the Iraqi government to comply with its own Constitution as well as with its international obligations to safeguard equal rights for all. We commend the brave and continued efforts by civil society actors in Iraq to reveal and oppose the lawless and dangerous nature of the attempts to legalize child marriage and call upon the international community to support such efforts in word and in deed. 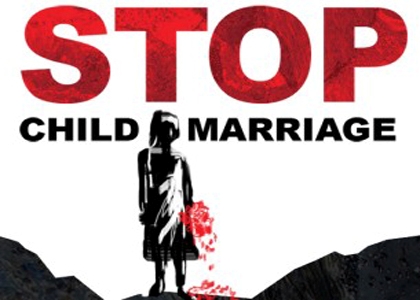 It is crucial to recall that the sectarian and political tensions reigning in Iraqi society root in the short-sighted and divisive occupation policies, the ensuing disarray and destruction, and the sectarian language, policies and practices of the Iraqi government. Any credible analysis of the conditions surrounding the proposed legislative changes must include the disastrous impact of sanctions, invasion and occupation.

Importantly, the proposed legalization of child marriage is far from being the only violation of Iraqi women’s rights. The grave violations committed against the Iraqi people under the sanctions regime, the invasion and occupation disproportionately affected women, and their consequences have aggravated their human rights situation significantly. GICJ continues to bring the situation of Iraqi women to the attention of the United Nations, notably the Committee for the Elimination of Discrimination Against Women (CEDAW), in the form of written reports and oral statements. GICJ considers it particularly important to highlight the disastrous impact of the sanctions and the illegal 2003 invasion/ occupation on Iraqi women’s rights – aspects that continue to be marginalized in official reports. Some of the key issues regularly highlighted by GICJ include the deterioration of women’s economic and health situation, limited access to education, obstacles to political participation, the difficult conditions of war widows, sexual exploitation, detention, displacement, and the consequences of birth defects.

GICJ holds that addressing sectarian strife and the deterioration of fundamental rights and freedoms of Iraqis and especially those of women necessitates the restoration of justice and accountability according to international law and international human rights standards, in particular in view of the suffering and destruction brought upon the Iraqi people through brutal sanctions, invasion, and occupation. It therefore remains crucial that civil society does not stop to actively raise its voice and insist that related issues be properly addressed by the international community. Now more than ever, GICJ urges the international community to bring all perpetrators of committed crimes to justice – even those that have emerged unscathed ever since Iraq has fallen victim to the illegal embargo and invasion. It calls on the international community to ensure that the Iraqi government lives up to its international obligations and assumes its responsibility to provide protection to the entire population – regardless of their gender, ethnic and religious affiliation, and political opinion.