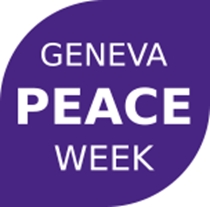 The Geneva Peace week took place from 6th to 10th November 2017. This year in its fourth edition, the Geneva Peace Week focused on the theme of “Prevention”, particularly regarding violence and conflict across the word. This year’s theme was designed to give a glance and analyse the progress on the implementation processes and recommendations for prevention activities at international and national level, in coordination with numerous interested stakeholders.

Geneva Peace Week was defined as a collective action initiative with the aegis of the United Nations Office at Geneva, together with the Graduate Institute of International and Development Studies, and the Geneva Peacebuilding Platform. The Initiative holds that the promotion of peace can be carried out in many disciplines fostering creative ways to contribute in the peace building of societies.  Furthermore, it seeks to spur synergy by holding meeting and events related to the promotion of peace.

The meetings, games and events organized in Geneva Peace Week, ranged from issues of conflict-prevention, building peace in the ICTs, Safer Internet for Children, e-commerce in conflict countries, education for peace, urban safety, the role of the private sector, fighting impunity in gender-based violence, intercultural dialogue for peace, conflicts on water, cyber treaties for cyber conflicts, the ravages of war on refugees, the role of media, the role of artificial intelligence, food security, among others.

Geneva International Centre for Justice hereby presents a summary of some of the events.

Event organized with the Albert Hirschman Centre on Democracy, Film Screening and Debate: “An Insignificant Man”.

Geneva (8th November 2017) – The Screening and Debate: “An Insignificant Man”, took place in the evening at Maison de la Paix of the Graduate Institute of International and Development Studies. 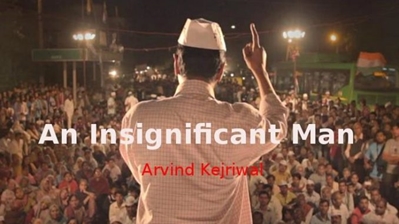 The event screened a documentary film that is based on a true political story that led to elections in India in 2013. It depicts the journey of Arvind Kejriwal, a populist leader in India, who decisively fought against the systematic corruption of the public administration and the unjust conditions for the Indian population related to water and electricity prices. Moreover, the film shows the path in which he creates a new political party named Common Man’s Party (Aam Aadmi Party-APP) that intends to include the specific concern of the people while engaging with them face to face. Additionally, the movie narrates the positioning and party’s brand strategies during his campaign, generating controversy and polarization among the local population. Lastly, it narrates the journey in which Arvind Kejriwal becomes a chief minister of Delhi. 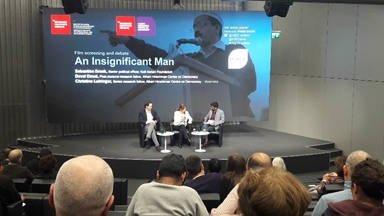 Christine Lutringer, Panel Moderator, welcomed the panellists and acknowledged the importance of the film that offers the possibility to have a deeper understanding into Indian Politics and the emergence of political parties that intend to engage with the peoples of the community. Likewise, Deval Desai, Post-doctoral research fellow of the Albert Hirschman Centre on Democracy, pointed out the complexity of the documentary’s topic and that it is “full of tension” as it depicts the exercise of, what he called “Populist Politics” and how the latter can be full of ambivalences. Some may see this leader as selfish unrealistic that gives out promises that he won’t be able to keep, while others can see it as a representation of the urgent need to change in the Indian Political Sphere.

Sebastien Brack, Senior political officer of the Kofi Annan Foundation, pointed out the frustrations that came along during the time of campaigning for this political party and how the film is able “to capture the downside of politics”. He also explained that the power of populism has ambivalent nature but certainly stressed the ability of the Political Leader to make the people passionate about engaging with community matters. Moreover, he noted that the populism movement during campaigning periods before elections, are sometimes filled by fake promises, however, the populist parties have been gaining popularity because they have succeeded at showing a clear ideology aligned and engaged with the populations through charismatic politicians and speaking on behalf of people’s concerns. Likewise, he mentioned that Populist parties are fuelled by angry populations to Mainstream Political Parties and Corruption as depicted in the Documentary. Lastly, he stressed the Democracy is not just about election mechanisms, but it also comprises the respect to the rule of law, stating that engaging excessively to the people may at some point put at risk the public order of a given country, showcasing the downside of populism.

Event on “Making Women Count in Peace Negotiations: An Insider’s Perspective from Colombia, Syria, and the Philippines”

Geneva (9th November 2017) – The event “Making Women Count in Peace Negotiations: An Insider’s Perspective from Colombia, Syria, and the Philippines” organized by the United Nations Department of Political Affairs and the Permanent Missions of Switzerland and Sweden to the United Nations in Geneva; took place in the evening at Maison de la Paix of the Graduate Institute of International and Development Studies.

The speakers of the event were: Olga Marín, Member of the International Commission of the FARC-EP, Advisor of the Gender Sub-commission during the peace negotiations in Havana, and Member of the Joint Monitoring and Verification Mechanism; Teresita Quintos-Deles, Former Presidential Adviser on the Peace Process in the Philippines; and Staffan de Mistura, United Nations Special Envoy for Syria.

Dr. Thania Paffenholz, Director of the Inclusive Peace & Transition Initiative at the Graduate Institute Geneva, was the Moderator of the Discussion. She acknowledged that the role of women in conflict resolution is crucial, but that women still face difficulties in accessing the negotiation table and influencing decision-making in mediation processes. 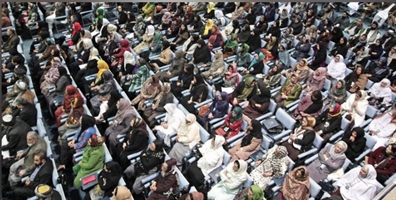 Prior to the discussion, the special guests dedicated some reflection words as an introduction to the Event.

Ambassador Veronika Bard, Permanent Representative of Sweden to the United Nations in Geneva, noted that although women participate in all levels at decision-making processes, this participation remains low in all those levels. She said that gender equality is not a goal itself but is a mean for reaching other goals for Sustainable Development and Peace. Additionally, she argued that more technical support and capacity building was needed to increase women’s participation in mediation and dialogue processes. Additionally, she stated that promoting women’s participation is a peace and security concern for everybody, so men should be included in this process.  Ambassador Sabrina Dallafior, Deputy Permanent Representative of Switzerland to the UNOG, stressed the importance of prevention measures for the exclusion of women in mediation processes, noting that the General Assembly has adopted resolutions where it has called for the participation of women in peace processes. She went on to say that inclusive peace-processes will be more effective and will lead to more sustainable results with the participation of women, and that the inclusion of women starts before the peace process begins. Elisabeth Scheper, Standby Team expert at the United Nations Department of Political Affairs, explained that over the last seven years, a lot of UN initiatives have been implemented for women to engage more in peace processes.

Dr. Thania Paffenholz, the Moderator of the Discussion, also noted the importance of the engagement of women in these processes. She stressed that the guest speakers would discuss from an insider’s perspective and their own experiences as negotiators, or mediators involved in peace negotiations, in Colombia, Syria, and the Philippines. 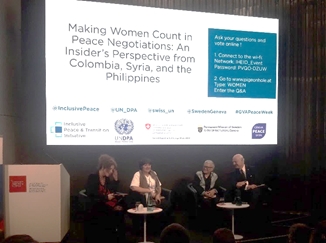 Olga Marín, Member of the International Commission of the FARC-EP, narrated briefly the development in gender participation in the Colombian Revolutionary Armed Forces-FARCs. She had started her journey at the FARCs when there were only 5 women and 80 men. Later on, around the 80’s, the composition of the FARCs began to change until the 2000’s when there was a substantial increase in women’s participation in these Forces. She analysed how at the beginning, the FARCs did not accept women because they could get pregnant any time, so they weren’t considered as combatants. But then the Organization (FARCs) decided to implement family planning regulations as mandatory for women, which also caused a big controversy since using contraceptives was considered a sin for those women, based on cultural and religious beliefs. Besides, she noted that the protracted use of contraceptive pills still has negative implications on women’s health. She also explained how women tend to be seen as the good ones, as those that always remain silent as a result of a patriarchal conception, and that war did not concern women back then: war was a men’s matter. Additionally, in Colombia, feminists’ groups have been stigmatized like those bitter, spinster or lesbian women. After many years of analysing the behaviour of women in the FARCs, they concluded that women started join the Revolutionary Forces because they sought for personal and autonomous development. Lastly, she explained that the FARCs have evolved in women’s participation until this day.

Teresita Quintos-Deles, Former Presidential Adviser on the Peace Process in the Philippines, narrated her experience at the Ministry of the Peace Process in Philippines. She explained that the Chair of the Peace Panel was male but after some time, they decided to change this Chief for a female. However, at first, the change on gender was not supported by workers making things so much difficult for the peace process. Eventually and with time, the new female chief was embraced by the workers and the peace process ran smoother. She noted that women were really influential in the peace negotiations as well as in civil society. 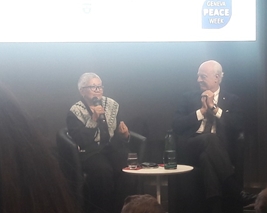 Staffan di Mistura, United Nations Special Envoy for Syria, narrated that out of his experience, women have showed creativity during peace processes. For instance, he pointed out the times when women accomplished peace through vaccination strategies in Central America, during the cold war, called the “Days of Tranquillity”, where vaccinations against polio, and other diseases were distributed by humanitarian actors. On the other hand, he mentioned that 30% of women got elected in the parliament in Afghanistan although after some time, women started to resign because of “the couple’s pressure”, pointing out that domestic support is also a factor for low levels of participation. In Syrian peace processes, it was highly difficult to spur the participation of women in the negotiation talks within the delegations. He, as the Special Envoy for Syria, nominated women advisors that way they were included in the peace process.

The Geneva Peace Week’s events were designed in a synchronized manner with the main aim of tackling issues related to conflict prevention. As it is evident in the summarized events, these intended to acknowledge the main causes of current conflicts such as the low participation of women in peace-processes, the conflicting interest of politicians in the international sphere and within the countries, the levels of corruption, and inequality issues, among others.

Geneva International Centre for Justice supports these kinds of initiatives as the Organization has constantly sought to reinforce the shrinking space of civil society in decision making processes, so it acknowledges that events like the Geneva Peace Week can potentially reach specific audiences, not only to educate them or inform them but to spread common concerns and to find solutions to the current problems. As seen in the summaries, the first event has shown the importance of engaging with people while fostering a failed democratic system and how this strategy can potentially tackle issues like corruption in societies while also promoting social justice. The second event has reflected the need for women to engage in peace making processes in a transition where everyone should be included, building peace and sustainable development at all levels. Moreover, Geneva International Centre for Justice, through its submissions to different UN mechanism, seeks to highlight the essential role of woman in peace making and decision-making processes so it endorses the message of the Geneva Peace Week’s events as an important contribution for the prevention of conflicts and for civil society’s engagement on peace-making processes.