Mr. Ahmad Qureshi, Researcher and Writer, he has worked extensively in Iraq, Syria and the Arabian Gulf region.

Imprisonment is a legitimate measure of States to punish perpetrators of crimes and offences. Nevertheless, prisoners, as all human beings, have rights, including the right to life, the right to be treated with dignity and the right to not be subjected to ill treatments and torture, in application of the International Covenants on Civil and Political rights, the Convention Against Torture and Other Cruel, Inhumane, Degrading Treatment, or Punishment and other international instruments.”

However, many countries, including Iraq, Yemen, Israel and Palestine, use their power to wrongly charge, arrest and detain political dissidents even though, in application of international human rights law, no one shall be detained without a legitimate reason and everyone has the right to a fair trial. Moreover, despite the existing international obligations, reports show numerous cases of torture to extract confessions from dissidents and members of the opposition party.

This panel discussion featured three experts who provided examples of how imprisonment and torture are currently being used to punish and intimidate political dissent by Iraq, Yemen, Israel and Palestine. Their examples also highlighted the disparate impact on women and the targeting of people, like journalists and human rights defenders, who are not themselves dissenters but who document dissent or attempt to protect the human rights of dissenters.

Mr. Christopher Gawronski, the moderator, opened the side event by noting the widespread use of torture and ill-treatment worldwide, despite their absolute prohibition under international law. He explained the event will address, in particular, the use of torture against political dissent. He then introduced the speakers, noting that each would address examples from a different country. 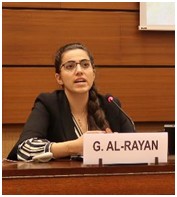 The first speaker, Ms. Ghada Al-Rayan, talked about the issue of imprisonment and torture in Israeli-run prisons in Israel and Palestine.

She asked the audience to imagine the suffering of a person being held in inhuman condition by describing filthy, smelly, windowless cells constantly lit with artificial lighting that hurts the eyes, or being subjected to solitary confinement, sleep deprivation, or extremes of hot and cold. She described the interrogation room, where people are forced to sit bound to a chair for hours or days while interrogators threaten them, threaten to harm their relatives, and employ violence. She explained that these conditions are a reality for the Palestinian prisoners in Israeli prisons in Occupied Palestine such as the Al-Moscobiyeh interrogation center in Jerusalem where 70 to 80% of prisoners are suffering from torture.

Al-Rayan noted that even though the widespread use of torture in Israeli prisons is a well-known fact, and despite hundreds of complaints being lodged with the relevant authorities, not a single criminal investigation has been launched into a complaint against an Israeli Security Agency interrogator since 2001.

She explained that despite the ratification of the Convention against Torture by Israel, a domestic legal loophole was created by an Israeli Supreme Court decision in 1999. In that decision, the court first determined that the Israeli Security Agency had, in fact, practiced torture and ruled that it could no longer use what the Security Agency described as “moderate physical pressure” on suspects under interrogation. However, it allowed the use of torture (“moderate physical pressure”) in the case of a “ticking bomb” scenario, where security officials believe that a suspect is withholding information that could prevent an imminent threat to civilian lives.

To put a human face on the issue, Ms. Al-Rayan gave the personal situation of several prisoners in Israeli prisons in both Israel and Gaza. One was Ms. Nisreen Hassan Abdullah, a mother of seven children from Gaza that has been in prison since 2015 and has not been allowed to have visits or see her family. Another was Ms. Israa Ja’abis, who was sentenced to 11 years, suffers from severe burns all over her body and has been denied adequate treatment in prison. Finally, she mentioned Mr. Osama al-Nabrisi, a 38-year-old man, who had been a prisoner in Israel for 12 years and has since been detained by Palestinian Authority Forces at least 15 times. 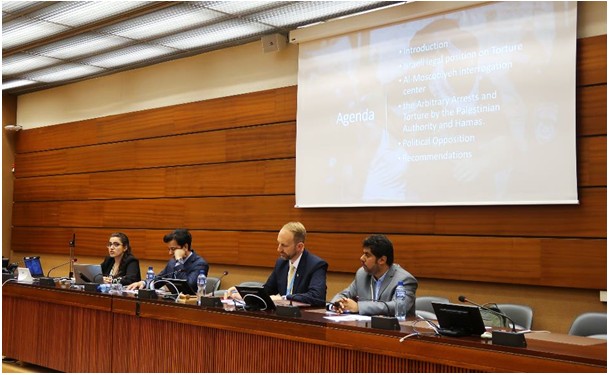 She ended her presentation by recommending international accountability for those who are involved in acts of torture. She called for the establishment of an effective protection system that guarantees the right of victims to report cases of torture without fearing retaliation, and changes in the Palestinian penal code with the aim of holding Israeli war criminal accountable for crimes of torture under State jurisdiction, in accordance with article 5 of the Convention against torture. 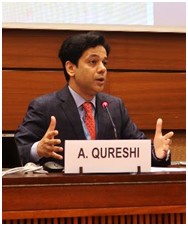 The second speaker, Mr. Ahmad Qureshi focused on Iraq and its “torture industry”. He began his presentation saying that torture is now a multi-billion-dollar industry and that when people, especially journalists, report on and speak about this industry, they face high-risk situations and may often come close to the threat of being tortured themselves.

He stressed the importance of having local people reporting about torture and asked why Iraqis are not reporting on torture in Iraq. He gave the example of Kashmir where, after 70 years, indigenous men and women created their first 700-page report on the situation of human rights in their territory. This action by indigenous people led the UN to take note of the situation for the first time – despite previous reports from organisations as Amnesty International and Human Rights Watch. Having indigenous people doing the work on human rights abuses gives credence to the work and stops others from accusing the reports of being politicised. The same must be done in Iraq.

Mr. Qureshi said that torture in Iraq probably changed how we look at institutionalized torture in conflict. Iraq stands out as a place where everything bad that happens in war came to be concentrated: torture, militias, abuse of religion, impunity, and sadism. He explained that during the occupation in 2003 and 2004, all institutions were dissolved, including the Government, the bureaucracy, the military, the professional armed forces, and the thriving civil society. Everything went down following one single signature and the situation has since been chaotic, which is one key reason why the torture industry emerged in Iraq.

He then showed the picture of the Iraqi man in a black hood wired for electric torture, taken in Nov. 2003, that has become the face of systematic torture in Iraq. He suggested that one good thing that came out of leaked photos like this one is that everybody knew the US military was involved in massive abuses, it was acknowledged by the US government, and intense corrective measures were taken, including ownership of what happened and investigation on what went wrong.

Nevertheless, he outlined that this level of scrutiny never shifted to the new Iraqi Government and armed forces, which were supposed to conduct investigations with the same level of as the US.  Even after the role of foreign forces in torture and prisoner abuse was reduced, Iraqi armed forces and allied militias continued some of the worst practices with complete impunity. Indeed, he contended that the new rulers in Iraq after 2003 were completely ignorant of their responsibilities as government leaders in terms of international commitments to stop torture and prisoner abuse, which led to embarrassing diplomatic situations for Iraqi officials. 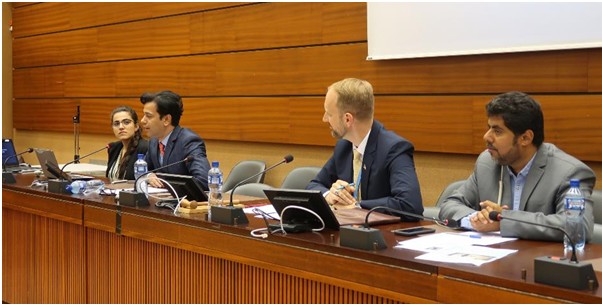 In this regard, he gave as an example the review of Iraq during the 9th session of the UN Committee on Enforced Disappearances, in Sept. 2015. After over ten years in power, everybody was expecting an explanation from the Iraqi government of what they were doing to address the problem of enforced disappearances. However, the Government of Iraq brought a dossier against the government of former president Saddam Hussain and what it had done prior to 2003. They offered no information on what had happened after 2003, despite the fact that the officials had worked with the US military and the international coalition when it was investigating.

He further offered a recent case, from June 2019, of a video of Pakistani pilgrims who went to visit holy sites in Iraq and were severely beaten up in the Baghdad International Airport. It turned out that the Government had taken many of the militias that are involved in the use of torture in Iraq and integrated them into the military forces and then put them in charge of security at the airport. These airport security personnel had no training in dealing with complaints, so their response was to beat people up. This resulted in a small diplomatic crisis and lead to discussions in the media on how to find ways to restrain the members of militias. If they were doing this to international travellers, what could they be doing in the rest of the country?

He ended his presentation by stating that until the Iraqi government recognises its role and allows indigenous people to investigate, there will be no accountability for torture and impunity will continue in Iraq. 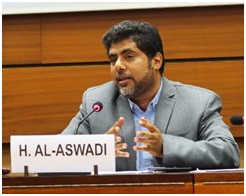 Mr Al-Aswadi began his presentation by stating that despite human rights violations by all sides in the Yemeni conflict, violations have escalated since the occupation of the Yemeni capital Sanaa by the Houthi militias, including torture and all inhuman and degrading treatment, noting that the percentage of torture crimes is the lowest in areas controlled by the legitimate government.

He raised the issue of prisoners being continuously transferred from one prison to another by Houthi forces and condemned a systematic use of torture that led to hundreds of deaths since the beginning of the conflict. He regretted the lack of access to document the cases, especially as most cases begin with enforced disappearance or arbitrary abduction, and denial of the right to a fair trial – if any trial at all – and the fear of reprisals that silence victims of tortures and their families.

Coming to data, human rights organisations have documented 18,000 cases of detention between 2015 and 2018. At least 1,000 cases were subjected to torture, and more than 100 victims died because of torture. Unfortunately, these reported numbers might be much less than the reality. 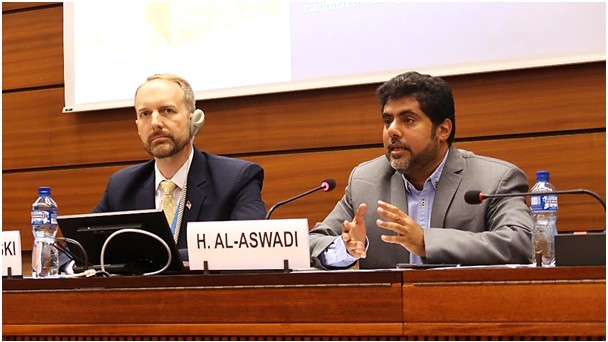 He explained that most torture is targeting on the genitals, and especially rape for women. This has the effect of silencing people from reporting the acts because of the shame that could fall on them and their families. He further explained that torture is used to subjugate the population and is a prelude to other crimes, such as forcing women into prostitution, and highlighted the heavy gender dimension of torture both during and after such acts.

He recalled that torture is prohibited under the Yemeni penal code, international law and international instruments ratified by Yemen, including the Convention against Torture and Other Cruel, Inhuman or Degrading Treatment or Punishment and the Convention on the Suppression of the Traffic in Persons and of the Exploitation of the Prostitution of Others.

He ended his presentation by stressing that not only dissidents are targeted but also human rights defenders, even though their action is not directed against the Government but towards the documentation of cases to help people.

Based on the available time, there was an opportunity for one question from the audience. A gentleman remarked that States and civil societies could possibly lessen the use of torture by showing evidence of how torture has been proven not to be very useful, that when used for interrogation it is actually not as good a yielding useful information compared with other interrogation methods. He gave an example of a US report in this regard.

Ms. Al-Rayan responded regarding the role civil society can play, noting that NGOs can report cases of torture to raise awareness, but they cannot prevent it directly and that the real power for change is in the hand of States.

Mr. Al-Aswadi added that unfortunately torture is used for many purposes, not just to extract information and confessions but also to threaten and coerce people.