On 2-3 May 2019, UNESCO will celebrate the 26th edition of World Press Freedom Day in Addis Ababa, Ethiopia. Jointly organized by UNESCO, the Government of the Federal Democratic Republic of Ethiopia and the African Union Commission, the global celebration will be held at the Headquarters of the African Union.

World Press Freedom Day was proclaimed by the UN General Assembly in 1993 following a Recommendation adopted at the twenty-sixth session of UNESCO's General Conference in 1991. This in turn was a response to a call by African journalists who in 1991 produced the landmark Windhoek Declaration on media, pluralism and independence.

The theme of this year’s World Press Freedom Day is ‘Media for Democracy: Journalism and Elections in Times of Disinformation’. This international conference will discuss several issues: the role of media in electoral times, and in building a culture of peace and reconciliation, the safety of journalists and the growing climate of disinformation.

The 2019 theme is directly linked with the UN’s Sustainable Development Goals (SDGs) as well as the African Union’s Agenda 2063, which aims to promote “an Africa of good governance, democracy, respect for human rights, justice and the rule of law".

Press Freedom around the World

As Winston Churchill said, 'A free press is the unsleeping guardian of every other right that free men prize; it is the most dangerous foe of tyranny'.

Member States of the Southeast Asian Nations (ASEAN) have become famous for their lack of press freedom over the years.  Out of 180 countries, the 2018 World Press Freedom Index placed Indonesia, Singapore, Lao PDR, and Vietnam at the 124, 151, 170 and 175 positions respectively, with Vietnam being considered the country with the lowest press freedom and Indonesia the highest. 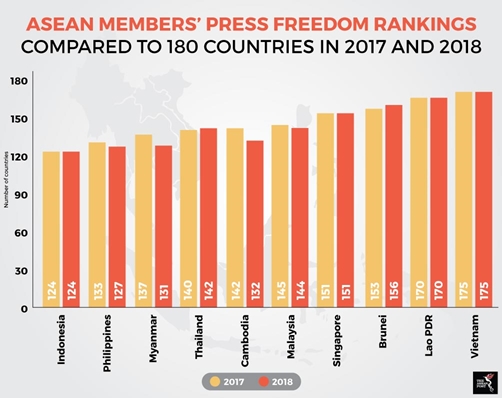 ASEAN governments have been working mainly against the diffusion of fake news rather than freedom of the press. In fact, false and misleading news was the main topic of the 14th meeting of the ASEAN Ministers Responsible for Information (AMRI) held in May last year. The declaration issued on that occasion had the objective to reduce the effects of fake news, increase digital literacy, and develop guidelines for responding to fake news. Many ASEAN countries have even implemented legislation to stop the spread of fake news. Singapore and the Philippines are in the process of adopting their own anti-fake news laws and Thailand has already passed a law against the spread of false information on the Internet. Lao PDR has also enacted an Internet law that enables severe control over its media, and Article 9 bans the posting and sharing of content about false information against the Lao People’s Revolutionary Party, if that undermines the peace, independence, sovereignty, unity, and prosperity of Lao PDR, or information that encourages citizens to become involved in terrorism, murder, and social disorder. Moreover, on 17 August last year, Malaysia tried to improve its score on the World Press Freedom Index, with the abrogation of its Anti-Fake News Law (AFNL). ASEAN Parliamentarians for Human Rights (APHR) Board Member Teddy Baguilat declared that “the action of the Malaysian government sends a signal to the wider region that positive human rights change is within reach. This is a law that was clearly designed to silence criticism of the authorities and … it should never have been allowed to pass in the first place”.

Origins of the term “fake news”

This term is becoming very popular, and it is connected to the debates related to democratic process and freedom of speech in the information age. In particular, US President Donald Trump has become famous for coining this term and openly attacking accredited media such as the New York Times and the CNN.

In recent years, the growth of social media has enabled the spread of misinformation, causing social unrest and increasing sectarian tensions. Democracies rely on informed citizens; in the UK-EU referendum, and the 2016 US Presidential elections, influence and misinformation campaigns have produced a significant impact on the outcome of the vote.

The relation between media and democratic participation has become very significant with the presidency of Donald Trump, who has used Twitter to create political division, threaten nuclear war, and label mainstream media as fake news.
Media ecologists study media as the environment that structures human interaction. In particular, Neil Postman (2000) explains: “Media ecologists study how media forms influence personal actions, interpersonal engagement, and broader societal changes…. A critical analysis of the media, identifies the power (…) involved in (…) disseminating media messages as a key factor in understanding why certain (…) messages are given heavy attention by the media, while others are ignored.”

A brief history of media manipulation

The term fake news may have appeared in the late 19th century, and the fact that news can mislead public opinion for political or economic reasons is not a new concept.

In the late 19th century, the term yellow journalism described stories invented by news organizations to make more profit. In particular, this type of journalism has been responsible for the tensions that led to the Spanish-American War and was the forerunner of what become tabloid journalism.

In the 1920s, Walter Lippmann (1922) published Public Opinion, where he reported his experiences writing for the War Department and the State Department during World War I and his shock in discovering how easily public opinion can be manipulated into supporting a war that was initially opposed.  Since then, the power of media in influencing mass opinion has become a major topic of discussion.

Radio provided a new platform for advertisers, who took advantage of the new technology to reach massive audiences simultaneously, increasing the role of consumerism in American culture.

More recently, the Bush administration produced news aiming at promoting the invasion of Iraq (see Barstow & Stein, 2005). Such stories were presented as objective news and were shown on local news stations, with the aim of sustaining certain policy positions.

Similarly, the Sinclair Broadcast Group introduced segments like “Terrorism Alert Desk” stories in order to produce a climate of fear that served political goals. The Trump Administration has also created short videos describing a meeting or initiative that looked like an interview, and was distributed through news or social media, with the same goal of promoting its political agenda.

Social media and the spread of fake news

The introduction of social media has considerably increased media manipulation. Nevertheless, platforms have been used for several purposes; effectively by marginalized groups seeking exposure and freedom of expression; perniciously by totalitarian groups aiming to mislead or divert the attention of the targeted audience; and for good and bad reasons by private citizens connecting to each other.

In his book, Lying: Confession of a Media Manipulator, Ryan Holiday (2012) describes how he effectively manipulated this channel to promote his products, taking advantage of the desperation of news outlets for readers and clicks in sharing unverified information.

Moreover, understanding the current media environment involves consideration of how mainstream media have lost credibility with the larger audience in its ideal role of informing the citizens. In fact, Trump’s attacks on the media were supported by this vague of discontent and loss of credibility that public information is experiencing nowadays.

Social media companies like Facebook are also designed to influence habits with notifications and algorithms that offer decontextualized fragments of information that can be easily manipulated (Vaidhyanathan, 2018). Furthermore, these companies are able to control users through the collection of massive amount of data that can be sold off or stolen for marketing purposes providing a consumer profile that is extremely accurate and that has never been available before. Users accept this invisible surveillance for convenience or security, neglecting the considerable threats to privacy and democracy.

If social media allowed marginalized voices to raise social issues (e.g., #BlackLivesMatter, #MeToo, #TimesUp) and organize activists on the ground like in the occasion of the Arab Spring (e.g., #TahrirNeeds, @TahrirSupplies), on the other hand social media platforms represent a real challenge as our virtual public spaces are more and more controlled by private corporations which are more interested in the market than democracy.

Fake news represents a great threat to freedom of press. Before the advent of social media, only accredited agencies could produce information while now even private users can write and publish content opening up a blog or a YouTube account. If this progress was initially welcomed as a democratic step, now we face a sort of “information disorder” as there isn’t an official body verifying who is producing content, particularly over the Internet. The fact that anyone can tell his story is good as it enhances freedom of expression, but it is also risky as it can result in the rapid spread of information that aren’t verified, true or grounded.   This diminishes the value of press freedom by producing relativism about what it is true and false and a huge amount of content that is inconsistent and not necessarily more informative.

Geneva International Centre for Justice (GICJ) supports the efforts of UNESCO in defending press freedom. And in particular:

•    It stresses the importance of news produced by transparent actors which is essential for democracy, development, science, health and human progress.

•    It recognizes that combating disinformation is a critical mission to news media.

•    It supports the commitment to enhance professional journalistic skills as essential to provide a credible alternative to counterfeit content.

•    It highlights the essential contribution that journalism can give to the Sustainable Development Goals of “public access to information and fundamental freedoms”.