On the occasion of its 57th plenary meeting, the UN General Assembly declared that the 20th of February would have been celebrated annually as the World Day of Social Justice. The 2019 theme for the day is "If You Want Peace & Development, Work for Social Justice."

The United Nations has defined social justice as: "Equal rights for all peoples and the opportunity for all human beings without discrimination to benefit from economic and social progress throughout the world". The promotion of social justice is not only to increase income and create jobs but also to focus on the rights, dignity and freedom of expression of workers, as well as their economic, social and political independence. 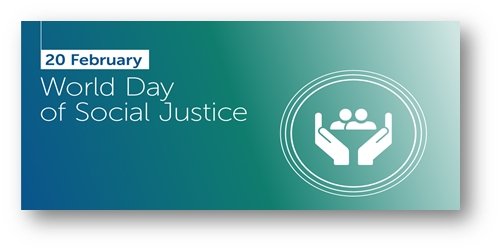 The list of social justice issues today is huge and relates to health, shelter, education, food and security. However, many of these basic needs are lacking or inaccessible. For instance, affordable healthcare is a major concern as the costs of private healthcare companies can largely impact healthcare conditions.

The World Day of Social Justice is observed with the key objective of bringing the international community together to eliminate poverty, illiteracy, gender and discriminations of all types in the pursuit of a socially integrated society.

In 1995, The World Summit for Social Development was held in Denmark, aimed to build a framework for social development centered around the people, to reflect the agreement on the need for a strong social dimension to globalization in reaching a fair and improved outcome for all. At this summit, more than 100 political leaders pledged to eliminate poverty and achieve full employment, as well as stable, safe and just societies. They also agreed on the need to put people at the centre of development plans.

Nearly 10 years later, the UN's member states reviewed the Copenhagen Declaration and Programme of Action when they gathered at a session of the Commission for Social Development in New York in February 2005.

On 26 November 2007 the General Assembly recognized that social development and social justice are crucial for peace and security to exist within a country, and that in the absence of peace and security or in the absence of respect for all human rights and fundamental freedoms, social development and social justice cannot be accomplished. Moreover, the General Assembly acknowledged that trade, investment and capital flows and advances in technology will help open new opportunities. These opportunities will aid in the growth of the world economy and the development and improvement of living standards around the world, not forgetting the serious challenges that remain due to financial crises, insecurity, poverty, exclusion and inequality within and among societies. The UN General Assembly during its 57th plenary meeting Decides to declare that, starting from the sixty-third session of the General Assembly, 20 February will be celebrated annually as the World Day of Social.

What is Social Justice?

Social justice has a central and important role in all aspects of life. It is the essential element that will enable all people to live a dignified life, ensuring that all individuals in different societies of the world receive the real opportunities they deserve such as equal access to employment without distinction as to gender, ethnic background, or race. Social Justice is important because it promotes and works toward a society that celebrates diversity and equality. Having more equality and diversity in a society is beneficial for the society as it promotes opportunity, growth and social well being. Societies that embrace diversity have more innovation, more peace and more prosperity.

The concept of social justice has a long and distinguished history.  From the writings of philosophers of the 17th and 18th centuries, such as Locke, Rousseau and Kant; the concept of a “Social Contract” protecting the rights of citizens within a wider social framework emerged. In this Era, the grant of individuals’ rights was balanced by the abandonment of wider, overarching rights to the state as a whole. In the 19th century, writers such as Proudhon developed the idea of a social contract to reflect the changing nature of the state from a paternalistic entity with a single monarch or aristocratic ruling elite to a more modern, egalitarian model.  In Proudhon’s writings, the contract existed between citizens rather than between citizen and state. The 20th century American philosopher, John Rawls, went further, proposing that social justice cannot be achieved if justice and liberty for one person is allowed to be overridden by the “greater good of others”. 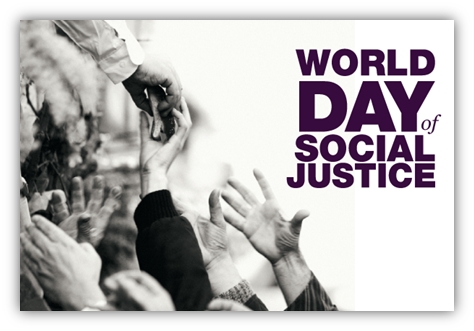 In turn, the United Nations has defined social justice as: "Equal rights for all peoples and the opportunity for all human beings without discrimination to benefit from economic and social progress throughout the world". The promotion of social justice is not only to increase income and create jobs but also to focus on the rights, dignity and freedom of expression of workers, as well as their economic, social and political independence.

The list of social justice issues today is huge and these issues are found throughout the world despite the existence of human rights. Health, shelter, education, food and security are the basic needs for Social Justice. However, many of these basic needs are lacking or inaccessible. For instance, affordable healthcare is a major concern as the costs of private healthcare companies can largely impact healthcare conditions.

Social Justice Institutions are responsible for providing equal care to all citizens whether they are employed or not. Poor people often feel as if they are fighting for life and treated differently because they don’t have any shelter to live under.

In many developing countries, provision of education is a concern that needs to be addressed. There are schools that don’t have chairs, desks and even toilet facilities. Accessible and affordable quality educational facilities are needed especially for the less developed countries of the world. There are also many parts of the world where people do not have access to clean water. Some are dying of starvation while others are dying from malnutrition. The cost of food is either too high or people don’t have access to nutritional food. Innovative programs have to be deployed for making the supply of healthy food accessible and affordable.

Pachamma, a non-profit organization dedicated to empowering indigenous Amazonians, also defined social justice as: "Equality of people in the distribution of resources and opportunities, regardless of their affiliation, gender or colour".

The World Day of Social Justice is observed with the key objective of promoting social justice and bringing the international community together to eliminate poverty, illiteracy, gender and discriminations of all types in the pursuit of a socially integrated society.

To promote social justice people should raise awareness in their community and share the importance to achieve global peace and prosperity. There are multiple methods to celebrate the World day of Social Justice, as one of the main methods is to “talk and debate” through raising issues such as poverty, illiteracy, malnutrition, and gender discrimination. Unemployment is also an important factor that prevents us from achieving social equality. Social Justice is closely connected to human rights, to a point where one reflects the other. Social justice is automatically brought to a place where human rights are practiced and protected.

Schools, colleges, and universities may prepare special activities for the day or plan a week of events around a theme related to Social Justice. Different media sources, including radio and television stations, newspapers and internet sites, may give attention to the issues around the World Day of Social Justice.

The United Nations sees social justice as the source for bringing global peace and prosperity and it is the core factor to achieve peace, harmony and prosperity around the world. There are many issues which obstruct its path to peace and prosperity like poverty, unemployment and gender inequality, crime and human rights violations. The UN’s objective of Sustainable Development Goals cannot be achieved unless these issues are addressed. Therefore promoting and advertising a theme will in many ways reach more audiences and spread the word through the society.

The 2018 theme of “Workers on the move: the quest for social justice” highlighted how most migrations today are linked directly or indirectly to the search for decent work opportunities. Even if employment is not the primary driver, it usually features in the migration process at some point. There are around 258 million international migrants, and among them roughly 150 million are migrant workers according to ILO estimates. The lack of social justice, in particular for low‐wage migrant workers, results in the risk of being trapped into jobs with poor wages and working conditions, often in the informal economy; exposure to violations of labour and other human rights; dangerous workplace and health hazards; child labour; forced labour; debt bondage; trafficking in persons; and other decent work deficits.

This year's theme is, "If Wou Want Peace & Development, Work for Social Justice". Building on the previous year's theme the ILO continues to highlight the 2 billion people who are living in fragile conditions and conflict-affected situations. It also believe that job, creation, better jobs, and better access to jobs for the bottom 40 percent will help increase incomes and help contribute to a more equitable and cohesive society.

Other themes in recent years have included the following:

•    Theme of 2017: Preventing Conflict and Sustaining Peace through Decent Work

•    Theme of 2016: A Just Transition – Environmentally Sustainable Economies and Societies

Geneva International Centre for Justice (GICJ) believes that acknowledging the significance of social justice toward achieving human rights and fundamental freedoms for all is essential for having a just and equal future. This goal can be realized by raising awareness and partaking in relevant activities that will enlighten and educate.

-    All governments to promote social justice at national, regional and international levels.

-    The international community to make effort to eradicate poverty and to promote employment, gender equity and social well-being for all.

-    All states to challenge the roots of oppression and injustice and to empower all people to exercise self-determination and realize their full potential.

-    Governments to put a stop to human trafficking and to provide decent work for migrants and the unemployed.