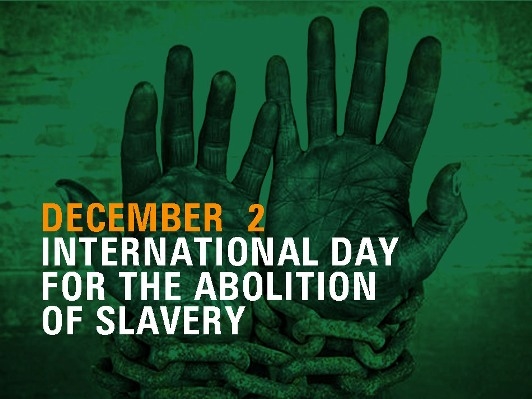 December 2 is commemorated as the “International Day for the Abolition of Slavery” and is marked by the “United Nations Convention for the Suppression of the Traffic in Persons and of the Exploitation of Prostitution of Others” adopted by the General Assembly under Res. 317 (IV) of 2 December 1949. This particular day is focused around modern day slavery, and while the term “modern slavery” is not defined under law nor international law it is used as an ‘umbrella term’ to cover practices where millions of men, women, and children are subjected to inhuman practices such as trafficking, sexual exploitation, forced labour, forced early/child marriage, and coercion, intimidation, or trafficking into armed conflict. It is especially worrying to note that 1 in 4 victims of modern slavery happen to  be children.

In addition to traditional forms of forced labour there are now more contemporary practices such as when migrant workers are trafficked for economic exploitation, which includes “work in domestic servitude, the construction industry, the food and garment industry, the agricultural sector and in forced prostitution”1

One of the more recent and serious examples of forced prostitution, for instance, is the concern for the human rights of Rohingya refugees (mainly women and girls) who are forced into sex work at refugee camps in Bangladesh.2 According to reports, Kutupalong, a large makeshift refugee camp in Cox’s Bazar (Ukhia, Bangladesh), holds a thriving sex industry that has been on-going since the establishment of the camp in 1992. Now, with the tens of thousands of refugee women and girls who are currently fleeing armed conflict, mainly from Rakhine State in Myanmar, many more vulnerable women and girls will be subjected to sexual exploitation due to their precarious situation and the existence of this sex-industry. 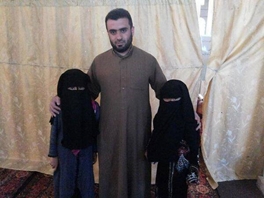 Iraq is currently on the brink of legalizing child marriage as it’s parliament is set to vote on a new legislation on this issue. On the 1st of November 2017 there were proposed amendments to the Personal Status Law (Nr. 188) of 1959 that would allow girls as young as 9 years of age to be married off. According to critics this would effectively deny girls of their childhood as marriage entails a myriad of duties normally taken up by an adult. Moreover, early marriage is detrimental to a child’s education as well as their psychological and physical well-being, again due to the adult responsibilities such as domestic work.

Under Article 3 of the International Labour Organization (ILO) Convention No. 182, the “worst forms of child labour” comprises:

As defined under the Paris Principles, the Office of the Special Representative of the Secretary-General for Children and Armed Conflict defines a child soldier as:

Thus, according to this definition the role of children in armed conflict is not limited to armed fighting but extends to other activities that support armed factions and more importantly that are detrimental to a child’s physical and psychological well-being.

This year, GICJ addressed a letter to the Special Representative of the Secretary-General for Children and Armed Conflict, Ms. Virginia Gamba, addressing and making a call to bring attention to the recruitment of children for armed training and combat in Iraq. During the ISIS occupation in Iraq it was known that ISIS forces recruited children into armed conflict and forced them to participate in carrying out other grave human rights abuses as well as forced exposure to horrifying atrocities. However, it is lesser known that pro-governmental forces also used children in armed conflict, particularly the al-Hashd al-Shaabi militias. As well, the Islamic Supreme Council of Iraq (ISCI) recruited children as young as 8-9 years old for military training, which according to the definitions and interpretations above is a form of modern slavery, and therefore, must be abolished.

South Sudan is also another region that is also seeing armed conflict due to disputes between opposing governmental parties and have committed grave human rights abuses, among which, is the recruitment of children in armed conflict. According to a report released by UNICEF in 2016, approximately 650 children were recruited into armed conflict by South Sudanese governmental forces.

Another example of “the worst forms of child labour” is:

(d) work which, by its nature or the circumstances in which it is carried out, is likely to harm the health, safety or morals of children.

In much of the forced labour, many children suffer and endure hazardous working conditions as they are forced to work in noxious industries such as textile, mining, quarrying, construction, and waste sites. Furthermore, the children suffer the trauma of coercion and in some cases intimidation that continues to deteriorate all aspects of their health and well-being.

Unfortunately, it is difficult to identify and target hard-to-reach children who suffer these extreme abuses. Thus, caution must be taken when identifying children in forced labor due to coercion or intimidation. For instance, other forms of forced child labour include employers abusing vulnerability of children; children in abusive households; and even children working with or for their parents who are themselves in forced labour. An example of this is when a given family in agriculture or brick kilns is in debt bondage thereby making children with them. Employment relationships or family debt are variants of forced labour among children and involves overlaps between children in labour and forced labour, and trafficking of children for labour exploitation.

Under Article 3 of the Protocol to Prevent, Suppress and Punish Trafficking in Persons Especially Women and Children, “trafficked in persons” is defined as:

“the recruitment, transportation, transfer, harbouring or receipt of persons, by means of the threat or use of force or other forms of coercion, of abduction, of fraud, of deception, of the abuse of power or of a position of vulnerability or of the giving or receiving of payments or benefits to achieve the consent of a person having control over another person, for the purpose of exploitation.”

In this sense exploitation includes forms of sexual exploitation, slavery and/or practices that are similar to slavery, the selling of organs, and forced labour or services.

Since April, there have been warning signs that African migrants attempting to cross the Central Mediterranean route have been captured, detained, and trafficked into slave labour. However, these warnings were not taken seriously and significant investigations were not carried out. In early November, reporters revealed that African migrants fleeing economic hardships and armed conflict were being trafficked and auctioned off into labour. Furthermore, they were subject to other grave human rights abuses, beatings, and many succumbed to death.

Additionally, reports indicated that many of the Africans en route were kidnapped and had their organs removed and sold. Others were held in detention centres for ransom as they were forced to call their families and pleaded for money while at the same time being beaten as a demonstration of the gravity of the situation.

The above examples are regrettably and sadly the reality that millions of men, women, and children face today. Despite this shocking fact it appears that little to nothing is being done by people in positions of power and influence to halt, eliminate, and prevent such practices and to hold perpetrators accountable.

People in vulnerable situations such as fleeing conflicts across unsafe routes or towards unsafe grounds are almost always targeted and exploited. Such is the case with African and Rohingya refugees who flee armed conflict. In other instances, children born in certain regions of the world and in particular situations are also vulnerable to modern slavery.

Considering the number of victims to modern slavery and the amount of various human rights abuses much needs to be done by states, several UN bodies, NGOs, human rights institutions, and civil society. To this end GICJ strongly recommends states to adopt the UN Convention on Transnational Organized Crime, the Forced Labour Convention and its 2014 Protocol that is legally binding, and implement Target 8.7, which calls on leaders to:

“Take immediate and effective measures to eradicate forced labour, end modern slavery and human trafficking and secure the prohibition and elimination of the worst forms of child labour, including recruitment and use of child soldiers, and by 2025 end child labour in all its forms”

It is also absolutely crucial that root causes be addressed to minimise and halt the atrocities with an end goal to abolish modern slavery and prevent any possibility for such practices to resurface.