International Day for Preventing the Exploitation of the Environment in War and Armed Conflict was established back in 2001 by the UN General Assembly, with Resolution 56/4. This day is observed annually on the 6th of November.

Of the observance of this day, former UN Secretary General Kofi Annan had stated back in 2014 that "We must use all of the tools at our disposal, from dialogue and mediation to preventive diplomacy, to keep the unsustainable exploitation of natural resources from fueling and financing armed conflict and destabilizing the fragile foundations of peace." This statement still has important value today, since the international community has to keep these words in mind and live by them.

Resolution 56/4 recalled the UN Millennium Declaration, which emphasized the necessity of safeguarding nature for the sake of future generations, and pushed for the protection of our common environment. The damage coming from armed conflict extends long beyond the period of the conflict itself, and has a long-term negative impact on the ecosystem.

In fact, the resolution also recalls Article 2, paragraph 4, of the Charter of the United Nations, which states that all Member States will refrain from the threat or use of force against the territorial integrity of any State in their international relations. 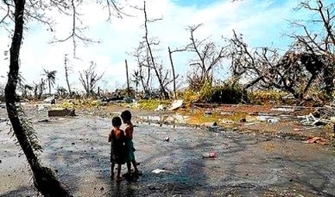 Today, wars are starting because of natural resources, and are being perpetuated because of them. The modernization of warfare has increased the effects that conflicts have on the environment; especially the creation of chemical and nuclear weapons has caused great devastation.

We are witnessing continuous examples of this. The Vietnam War had significant environmental implications, due to the chemical agents which destroyed a great part of the vegetation. Vietnamese ecologists also documented that many species of animals had migrated elsewhere, due to the habitat degradation.

The Rwandan genocide also provoked great stress on the environment; it caused a massive migration towards migration camps in Tanzania and what is today the Democratic Republic of the Congo. This large displacement of people caused a negative impact on the ecosystem and the threatened natural resources of the areas.

Furthermore, the Middle East is also suffering from armed conflicts affecting the environment. People have been fleeing Mosul for many years, due to the fact that their lives are being impacted by ISIL and their ongoing military operations. GICJ has largely covered the ongoing issues in the country. The pollution in the city, coming from choking clouds and toxic fumes from burning oil wells and industrial facilities, have just been an addition to the seek of refuge elsewhere.

The oil fires that were deliberately started during the 1991 Gulf war in Iraq have caused terrible environmental degradation, and have polluted vast areas.

Similar problems have been noted in countries such as the former Republic of Yugoslavia and Syria, where conflicts have contaminated agricultural land and drinking water.

Afghanistan, for example, wildlife and habitats have completely disappeared. The war has stripped the country of its vegetation, including the precious native pistachio woodlands. More than one-third of tis forests have vanished, and drought, desertification and species loss are very common. 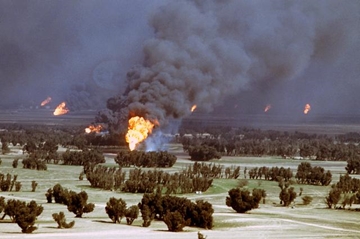 During the 1970’s, there were the first attempts at creating what is now modern international environmental law.

In particular, in 1972 the Stockholm Declaration on the Protection of the Environment was concluded, during a UN conference; this conference also led to the creation of the UN Environment Programme.

Subsequently, and especially after the Vietnam War, the environmental concerns were reflected in two legal documents, namely the Convention on the Prohibition of Military or Any Other Hostile Use of the Environment and the First Additional Protocol to the Geneva Conventions. In particular, the Geneva Conventions place restrictions on methods of warfare “which are intended, or may be expected, to cause widespread, long-term and severe damage to the natural environment”.

In the aftermath of the Iraq-Kuwait war in the 1990’s, more attempts to further codify and strengthen the existing protection were made. However, one of the then Special Rapporteurs to the UN’s International Law Commission still thought that the existing international legal protections were rudimentary and insufficient.

In 2009, an ulterior step forward was made; UN Environment, the ICRC and the Environmental Law Institute made one of the first comprehensive analyses of how different areas of international law could protect the environment during armed conflict. This analysis encompassed twelve recommendations on what laws would apply in these situations; the International Law Commission examined it, and decided to put it on its long-term program of work in 2011, under the topic “Protection of the environment in relation to armed conflicts”.

The recommendations include the need for post-conflict environmental assessments and remedial measures, as well as the environmental impact of peace operations.

Environmental destruction results to have a negative impact on the delivery of humanitarian assistance, and also on the prospects of post-war recovery. Protecting the environment from the impacts of bombings, landmines and toxic pollution is essential to avoid adding another reason for civilian population to migrate.

UNEP has found that over the past 60 years, a great part of internal conflict taking place in various parts of the world can be linked to the exploitation of natural resources. War and conflicts have had an effect not only on the civilian population, but has also destroyed the environment; water has been polluted, crops have been torched, forests cut down, soils poisoned and animals have been killed. In the aftermath of these conflicts, natural resources such as land require the attention of Governments to restore any environmental damage.

In places like Central and East Africa today, illegal trafficking in minerals, wildlife, timber, charcoal and narcotics is financing illicit activities and supporting armed groups and criminal networks.  In Somalia, for example, it is estimated that the illegal trade in charcoal represents annual revenues of up to $384 million for insurgents and terrorist groups.

Furthermore, the disposal of weapons is also a critical concern for the environment. The latter is being contaminated by land mines and unexploded devices in many countries, such as Syria and Iraq, and the safe destruction of chemical weapons has to be done to avoid public health risks. The UN has been especially concerned about the vulnerable situation of women and children, who are the most at risk in this situation. 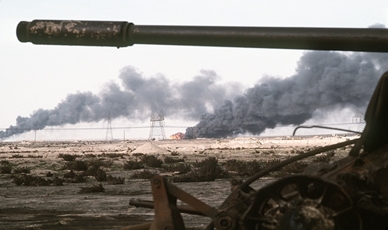 Thus, the United Nations have stressed time and time again the importance of remembering that action on the environment is part of conflict prevention; peacebuilding operations also have to avoid the destruction of the ecosystem, and projects have to be brought on to sustain livelihoods.

On the 27th of May, 2016, all 193 Member States of the United Nations Environment Assembly adopted resolution UNEP/EA.2/Res.15, which recognized the role of healthy ecosystems and sustainably managed resources in reducing the risk of armed conflict. This step represented a signal of the commitment of UN Member States to confront the issues.

In September of 2016, an important development for the protection of the environment took place in international criminal law; the Office of the Prosecutor of the International Criminal Court published a policy paper which signals what environmental crimes have to be regarded as priority areas for the court, that have to be considered as grave crimes.

Member States, as well as entities of the United Nations and other international and regional organizations, have to work together to implement resolution 56/4, and promote it in the international community.
GICJ recognizes that today’s generations also play an important role, since they have the responsibility for the safeguard of the environment; if neglected, the next generation may find that much of the environment as we know it today will be gone forever.