The “International Day to End Impunity for Crimes against Journalists”, proclaimed by the United Nations, is observed on November 21, and it seeks to publicly urge the International Community to be more effective at implementing necessary measures to fight against the culture of impunity for those crimes, which sadly prevail until this day. This International Day was designated in 2013, in remembrance of two French journalists that were abducted and killed in Mali, after they interviewed an opponent political leader.

In addition, the observance of this day aims to condemn all types of violence against journalists and media workers across the world, calling on all States to promote a safe environment for journalists to perform their work independently, and without any impediment.

According to the Director-General of the United Nations Educational, Scientific and Cultural Organization (UNESCO), from 2006 to 2016 there have been more than 930

journalists killed across the world2, for the only reason of doing their job and bringing news and information to the public eye. Unfortunately, the formal figures reported by the UNESCO do not necessarily comprise all those journalist who constantly suffer from other types of violence such as, inter alia, enforced disappearances, torture, arbitrary detention, and harassment. Additionally, UNESCO has reported that 95% of those killings are attributed to local journalists and 5% were foreign correspondents. On the other hand, 94% of those journalists were male. However, women journalists also suffer from other types of attacks besides harassment and threats, including those of sexual nature. To make matters worse, an estimate of only less than 10% of those cases have been brought to conviction. The latter statistic shows that the culture of impunity remains as a prevailing fact in this horrid issue, spurring criminals to continue perpetrating this crime, owing mainly to the realization that they won’t be subjected to due investigation, conviction and justice. Unfortunately, the fear and self-censorship that result from this situation deprive entire societies from true information, further affecting press and media freedom.

The last report of the UN Special Rapporteur of Freedom of Expression on the protection of journalists3 notes that there has been an increase in the number of killings, assassinations, assaults and incidents of ill-treatment against persons associated with journalism and mass communication in the last years. Additionally, a high percentage of the killings have been connected to investigations into corruption, organized and political crime that the journalists were conducting at the time of the assassination or the imprisonment. 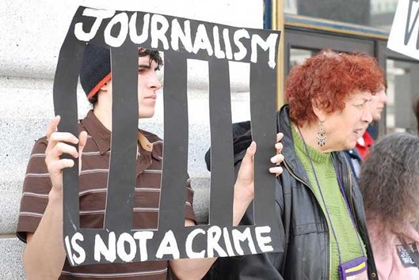 Geneva International Centre for Justice (GICJ) expresses its deep concern on the impunity for the crimes against journalists as it creates a fearful environment in all societies, especially among professionals who work in the media industry. GICJ notes that the fact that attacks to journalists are not duly punished teaches society that expressing any type of opinion will put them in danger and that no justice system will protect them. This will tend to lead members of society to a generalized loss of trust on their legal processes, which was supposedly designed to protect them from all sorts of attacks to their rights.

On the other hand, the Committee to Protect Journalists, a New York-based NGO that promotes press freedom and defends the rights of journalists, has reported that the top 4 deadliest countries for journalists in 2017 are Iraq; Syria; Mexico and Yemen.4

After analysing the figures and highest peaks of killings in the deadliest countries, GICJ notes that the trend of journalists getting killed has increased rather than decreased, showing that impunity on those crimes has negative effects, therefore, it has prevailed, and worse yet, it has horridly augmented in the last years.

On this International Day to end Impunity for Crimes Against Journalists, GICJ firmly believes that each journalist getting killed or harassed around the world proves the still inefficient mechanisms adopted domestically by the States, to protect the universal right to freedom of opinion and expression for their societies. Likewise, GICJ believes that this criminal trend poses an immense menace to the main underpinnings of democracy and justice, as the culture of impunity devastates entire societies by allowing serious human rights violations.

GICJ notes that all UN Member States agreed upon the 2030 Agenda for Sustainable Development, adopted by the General Assembly on September 25th- 20155, which is designed to protect People and achieve Peace ensuring the protection of human rights for all. Furthermore, GICJ stresses that Agenda 2030 and particularly Goal 16 seek to promote peaceful and inclusive societies by providing access to justice and by seeking the progress on freedom of information within societies. However, the impunity of killing journalists continues to have a direct negative impact on the global efforts to promote peace, security, and sustainable development.

Moreover, GICJ believes that states, civil society and other competent stakeholders ought to work together to prevent all types of violence against journalists. Furthermore, GICJ avers that journalists, as any other person, have the right to work free from the threat of retaliation. Therefore, it is of paramount importance that States offer an environment where media workers can perform independently and free from interference and risks. For these reasons, GICJ urges all UN Member States to ensure accountability, bringing all perpetrators of crimes against journalists to justice, and that way guaranteeing freedom of opinion and expression, as proclaimed by the Universal Declaration of Human Rights, the International Covenant on Civil and Political Rights, and other International Human Rights Regional Instruments.6

2. Message from Ms Irina Bokova, Director-General of UNESCO on the occasion of the International Day to End Impunity for Crimes against Journalists 2017, available at:  http://unesdoc.unesco.org/images/0025/002596/259687e.pdf