The humanitarian deterioration in Myanmar, particularly widespread and systematic human rights violations against Rohingya Muslim minority in Rakhine state, remain within the discussion halls of the international community and the Myanmar government. Myanmar is repeatedly condemned for grave breaches of international human rights law and international humanitarian law. However, these violations are not adequately investigated, perpetrators enjoy impunity, and victims are denied the right to effective remedy and reparation. The excuses given by the government such as having a young democracy in Myanmar and the complexity of the situation is unacceptable. It is clear, that the Myanmar government is unable or unwilling to protect the Rohingya ethnic minority and civilians in the areas of armed conflict in accordance with international law. It is time for the international community to take bold actions based on Chapter VII of the UN Charter to stop genocide and to ensure protection of civilians in the world's longest civil war running for almost 60 years since 1948.

On 21 July, the UN Special Rapporteur on the human rights situation in Myanmar issued her end of mission statement on her 12-day visit to Rakhine, Shan and Kayin states of Myanmar. As the UN press release emphasised on 24 July: “Special Rapporteur has issued a strongly worded statement accusing the Government of Myanmar of policies reminiscent of the previous military government, and of presiding over a worsening security and human rights situation”1. Indeed, the Special Rapporteur noted “ killings, torture, the use of human shields by security forces, deaths in custody” and that “the situation of the Rohingya people from Rakhine State, many of whom have been forced from their homes amid reports of grave human rights violations, had hardly improved since her last visit in January (2017)”2. 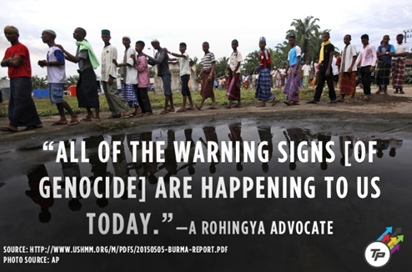 Geneva International Centre for Justice (GICJ) affirms that the wording of the Special Rapporteur in her end-of-mission statement of July is non-persuasive and her actions are not bold enough given the situation in Myanmar. The focus of the statement is the conditional access and the lack of genuine cooperation of the Myanmar government with her mandate and other UN actors, including refusal of visas for UN fact-finding mission members. In addition, the Special Rapporteur reminded of her previous field visits to Myanmar as well as her recommendations for a special session of the Human Rights Council on the situation in the north of the country, specifically Kachin and Shan States; and for a Commission of Inquiry on the situation in Rakhine State. However, GICJ considers that the Special Rapporteur should ring all the bells of “Never again!” as there are reasonable grounds to believe the commission of the international crime of genocide in Rakhine state.

It is well-known that the Myanmar humanitarian catastrophe with escalating armed hostilities between the ethnic minority groups and the government for more than half of a century is described by serious violations of international humanitarian law by all parties: indiscriminate killings, enforced disappearances, rape and sexual violence, forced labour and trafficking of human beings, recruitment of child soldiers among state and non-state forces, use of human shields, forced displacement, and conditional humanitarian access.

Moreover, the Myanmar government fails to ensure the halt of violence and serious abuses against ethnic minorities, particularly the Rohingya religious minority. The incitement to discrimination and violence based on national, racial and religious hatred is widespread and systematic. Within the general context of anti-Muslim rhetoric, the government and security forces have been implementing a persecution policy for decades. The ethnic minorities are targeted within the so-called “Burmanization” policy and the most shocking is the case of Rohingya people. The Rohingya community of approximately 1,3 million members have mostly lived in Rakhine State for centuries with historical roots in Myanmar dating back to ancient times. Nevertheless, the government refuses to give them the nationality and instead it uses the term “Bengali” to refer to Rohingya as foreigners. Over 100,000 ethnic minority Rohingya have taken a perilous journey to leave the country by sea; the Rohingya are fleeing horrific Apartheid-like conditions where 140,000 are confined in what many describe as "concentration camps"3. UNHCR estimates that some 350,000 Rohingya have fled Myanmar in search of protection in Bangladesh, including an estimated 74,000 who arrived in late 2016 as a result of a security crackdown in northern Rakhine state4.

Whilst the national state and local government authorities carry out discriminatory policies, the security forces implement so called “clearance operations”. The Myanmar armed forces (Tatmadaw) and the Border Guard Police Force of Myanmar deliberately kill the Rohingya civilians by grenades, random and targeted shootings, stabbings, slit throats, by beating them to death and burning them in houses. The most disturbing reports note the killings of babies and small children, in many cases in front of the eyes of their raped mothers. Rohingya children, pregnant women, persons with disabilities and others are subject to torture and ill-treatment in public, in their houses and make-shift detention locations. 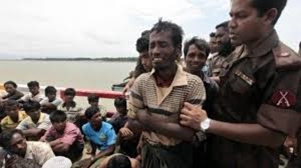 It includes brutal physical assaults, death threats, forcing to sit in so called ‘stress positions’ for hours up to 3 days, and psychological torture by forcing victims, even children, to watch the suffering of their relatives. It is reported that hundreds of Rohingya boys and men are randomly “rounded up” by the Myanmar security forces, fertile women and girls separated from them and taken away; with their whereabouts unknown. Women and girls, including pregnant, are raped and sexually abused either at home in front of their family members or in the places of displacement; in many cases gang rapes, as punishment or with the aim to extract information about insurgents or simply to be used as domestic service. Moreover, the Rakhine villagers dressed either in military uniform or in civilian clothing joined the abuses against the Rohingya community members by looting houses, beating, raping and other sexual abuse. There are recounts of cases when fire brigades poured petrol to spread fire on burning houses of Rohingya.

The widespread, systemic and organised abuse of the Rohingya minority in Myanmar with an obvious intent to destroy this group amounts to the international crime of genocide. The persecution of this ethnic group since 1982 in combination with the widespread criminal acts committed against them since 2012 fulfil the elements of genocide as defined by the Rome Statute of the International Criminal Court and the Genocide Convention. Namely, killing members of the group, causing serious bodily or mental harm to members of the group, deliberately inflicting on the group conditions of life calculated to bring about its physical destruction in whole or in part and imposing measures intended to prevent births within the group.

Lastly, this abusive and chaotic environment coupled with the inadequate legal framework fails short to protect local communities and the environment from damaging activities of transnational corporations. The lack of transparent procedures and efficient regulations undermine corporate accountability. Transnational corporations often violate human rights and are directly complicit in human rights abuses, especially in the areas of armed conflict. The operations of multinational corporations, especially in the extractive industry, have high potential and capacity to harm human life and dignity. Human rights abuses includes infringement on the rights to life, liberty, security of person, freedoms of assembly and association, freedom of movement, freedom from torture, cruel and inhuman treatment and punishment, sexual and gender-based violence, arbitrary arrest and detention, unjust labour practices, piracy, slavery and slave trading, as well as war crimes. Geneva International Centre for Justice has submitted several written statements to the Human Rights Council calling to take actions on widespread and systematic violations against the Rohingya Muslim community that amount to genocide and to ensure protection of civilians as well as corporate accountability of transnational corporations that have and are currently operational in Myanmar for grave human rights violations in zones of armed hostilities. Hereby, GICJ calls for UN action based on Chapter VII of the Charter to restore peace and security in Myanmar and to protect Rohingya from genocide. The UN Special Rapporteur on the human rights situation in Myanmar in her October report to the UN General Assembly (GA) should analyse the genocidal intent and alarm the GA members.

The Myanmar government should grant full access to the UN fact-finding mission and international humanitarian aid workers, observers and journalists to conflict areas, especially in Rakhine State. The Government should repeal discriminatory legislative and policy measures targeting religious and ethnic minorities, lift restrictions on movement that impede access to health and education services, intensify its efforts to address discrimination, to counter incitement to hatred and hate speech leading to violence and it should enact legislation and implement policies to grant Rohingya people the Myanmar nationality. The government should adopt a comprehensive international law with a compliant legal and policy framework that would prevent the ability of multinationals to profit from human rights abuses and ensure that corporate activity on its territory, especially in the extractive industry, follows international norms. The home states of transnational corporations should issue instructions to businesses prohibiting any activity in a foreign country that would contribute to existing or bring about human rights abuse. The Myanmar government should enhance cooperation with the UN agencies and special-mandate procedures to coordinate strategies to address the current and prevent future mass atrocities.

1. “Myanmar: UN expert lists catalogue of concerns as human rights slide in worsening conflict”, Geneva, 24 July 2017 at: http://www.ohchr.org/EN/NewsEvents/Pages/DisplayNews.aspx?NewsID=21901&LangID=E
2. End of mission statement by the Special Rapporteur on human rights situation in Myanmar, Yangon, 21 July 2017 at: http://www.ohchr.org/EN/NewsEvents/Pages/DisplayNews.aspx?NewsID=21900&LangID=E
3. “The Rohingya: Not Just a Name, A People at Risk of Genocide”, United to End Genocide at http://endgenocide.org/conflict-areas/burma/
4. “Give the Rohingya hope for a future” urges UNHCR chief, 11 July 2017 at http://www.refworld.org/docid/5964c3a24.html

Other articles on Myanmar by GICJ