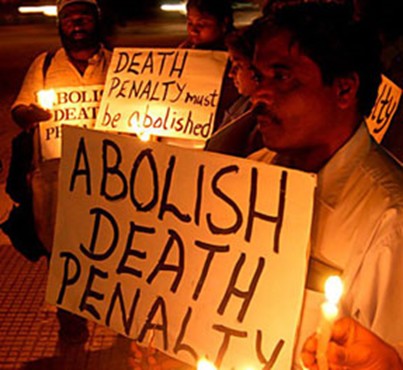 Today 10 October marks the 17th World Day Against Death Penalty. This world day has been put in place by a coalition of NGOs known as the World Coalition Against the Death Penalty, in 2003. This day aims to raise awareness of the issue of the death penalty and the global fight against it. In particular, the International Covenant on Civil and Political Rights and other international and regional instruments are overwhelmingly opposed due to the centrality of the right to life and the protection against torture within these.

2019 also marks the 30th anniversary of the Second Optional Protocol to the International Covenant on Civil and Political Rights (ICCPR), aiming towards the abolition of the death penalty. To this day, this Protocol only counts 87 States parties and two signatories, while 108 States have not taken actions towards the signature or ratification of this instrument. This is in stark contrast to the ICCPR, which enjoys 173 ratifications, 6 signatures, and only 18 countries declining to take action at all. GICJ regrets that not all the States Parties to the ICCPR understand the rights contained in it as an inherent prohibition of the use of the death penalty, which goes against its key values. By failing to ratify the ICCPR’s Second Optional Protocol, thus refusing to outlaw the death penalty, such parties undermine the value of the ICCPR as a whole.

Even though the number of death sentences is decreasing, 19,336 people were known to be on death row around the world at the end of 2018. Indeed, while the executions may be in decline globally, the practice remains widespread in a number of countries; in particular, in China, Iran, Saudi Arabia, Vietnam, and Iraq. Moreover, GICJ notes that the data on executed death sentences is not totally reliable as, for many countries, only those reported in newspapers are counted. Indeed, in the case of China, since such executions are usually carried out in secret, NGOs generally assume that the number of death sentences could be in their thousands per year, but without any certainties.[i]

Some countries have also drastically increased or re-introduced the practice of the death penalty in recent years. In Egypt, for example, while only two executions were initiated in 2008, the authorities carried out 49 and 43 executions in 2016 and 2017.[ii]

Singapore[iii] and Vietnam[iv] are also following this path, with respectively 13 and 85 executions reported in 2018. Nevertheless, at the Asia-Pacific region level, we can see a decrease from at least 130 executions in 2016 to 93 in 2017.[v]

Regarding the other four countries practising the death penalty at a high rate, Iran still maintains one of the highest rates of State executions in the world. Yet, this case highlights the impact that grassroots activism can have on issues such as the death penalty, since the change is largely attributable to the reform of Iran’s drug law which has changed after almost a decade of advocacy and pressure from NGOs.[vi] Indeed, Iranian society is now far more aware of the irreversible harm of executions after the work of such activists and NGOs.

Iraq had for a long time one of the highest rates of executions in the world, permitting the death penalty against adults for a wide range of crimes. Since the rise of ISIS, the number of individuals sentenced to death has increased dramatically; at least 100 people have been executed in 2019 so far, compared to at least 52 in 2018.[vii] Indeed, the numbers are likely to be far higher, since hundreds of death sentences are given to those convicted under counterterrorism legislation, and the numbers of these are not publicised.[viii]

The situation is similar in China, where NGOs report thousands of incidents of extra judicial the executions which are usually undertaken in secret prisons.

In Saudi Arabia, 2019 has been a particularly gruesome year for executions, with the year on course to be the worst in the last decade. By May 2019, 107 individuals had already been executed, with Amnesty International calling the surge a ‘bloody execution spree’.[ix] Indeed, by September, this figure had increased to 134, including the execution of six persons who were minors at the time of their arrest.

Thus, the death penalty obviously remains widespread despite the efforts undertaken by the UN and its bodies, NGOs and other institutions, to abolish its practice given the breach of human rights incurred. Indeed, while the death penalty may globally be on the decline, various countries are re-introducing the practice, and it is being using ever more frequently in some areas.

As such, GICJ calls on all States to ratify the ICCPR Second Optional Protocol and to respect their obligations under customary international law, the ICCPR and other instruments by enhancing the right to life and the right not to be subjected to torture and ill-treatment.