Since 1981, women’s rights activists mark 25 November as the day of the tireless struggle to end violence against women and girls. This day dates back to the tragic murder of three Dominican political activists in 1960 – ‘Mirabal sisters’. As the women’s rights agenda was evolving in the international discourse, the Declaration on the Elimination of Violence against Women was adopted on 20 December of 1999. Furthermore, in efforts to raise public awareness and to end violence against women and girls, the UN General Assembly designated 25 November as the International Day for the Elimination of Violence against Women and Girls. Each year, governments, international and domestic non-governmental organizations organize various activities to mark 25 November. In addition, UN Women connects a global campaign – 16 Days of Activism Against Gender-Based Violence – starting on 25 November till 10 December (Human Rights Day). In 2017, this campaign is themed “Leave No One Behind – End Violence against Women” and it encourages to make actions visible with the “Orange the World” motto. 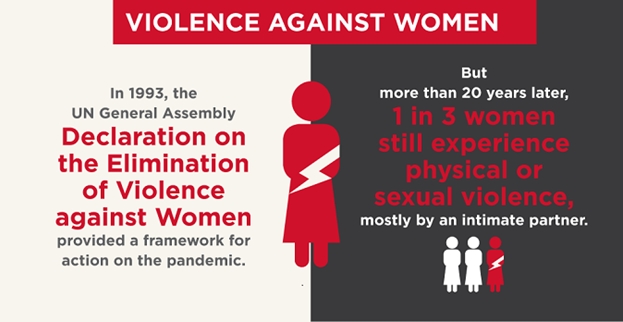 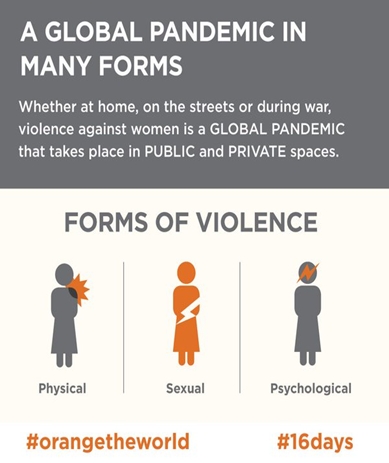 The Declaration on the Elimination of Violence against Women defines violence against women as "any act of gender-based violence that results in, or is likely to result in, physical, sexual, or mental harm or suffering to women, including threats of such acts, coercion or arbitrary deprivation of liberty, whether occurring in public or in private life."  In public or private spheres, in times of war or peace, violence against women and girls are widespread and systematic human rights violations taking place in a persistent manner and in unbelievable proportions. Violence takes place in physical, sexual and psychological forms: women and girls are harassed, threatened, tortured, ill-treated and physically harmed, forcefully married off, trafficked and sold as slaves, raped, and killed. Human rights defenders and activists differentiates intimate partner violence, sexual violence and harassment, human trafficking, female genital mutilation and child marriage.

Abuses and violence against women and girls are committed everywhere in the world in widespread and systematic manner. The UN Women makes reference to disappointing facts and figures: between 15 and 76 percent of women are targeted for physical and/or sexual violence in their lifetime; up to 50 percent of sexual assaults are committed against girls under 16; approximately 130 million girls and women in the world have experienced female genital mutilation/cutting, with more than 3 million girls in Africa annually at risk of the practice; over 60 million girls worldwide are child brides, married before the age of 18, primarily in South Asia (31.3 million) and sub-Saharan Africa (14.1 million); the first sexual experience of 30 percent of women was forced; the percentage is even higher among those who were under 15 at the time of their sexual initiation, with up to 45 percent reporting that the experience was forced. 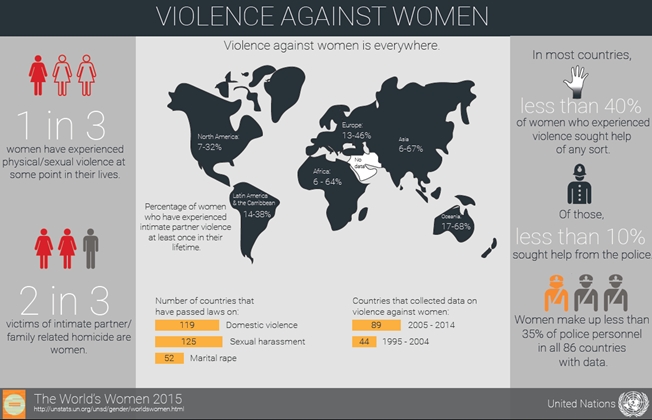 Women and girls are discriminated in law and in practice and high levels of sexual and other types of abuses are reported in all countries of the Middle East and North Africa region. The laws allowing rapists to escape persecution in the case of subsequent marriage to the victim aged between 15 and 18 are outrageous. In Jordan, the government fails to protect women and girls among other abuses from so-called “honour” crimes. The government revised legislation that allowed rapists to escape prosecution if they married their victim, except in cases where the victim is aged between 15 and 18. Marital rape is not criminalized, such as in the case of Bahrain. In Iran, women’s right to decide freely whether and when to marry, divorce and have children are undermined, which often brings about forced marriages and abuses. Moreover, due to compulsory “veiling” (hijab) laws women in Iran remain subject to harassment, violence and imprisonment by the police and paramilitary forces. On 1 November, the parliament in Iraq voted to amend the Personal Status Law to allow girls as young as 9 years old to marry.

Gender-based sexual violence and abuse is common in the Asia-Pacific region. Violence against women and girls is common in Bangladesh: women and girls face various forms of gender-based violence, including domestic violence, physical and psychological abuse, dowry-related violence, rape, and early marriage; rape is a grave and widespread problem in Cambodia - young women and children are particularly affected by this crime; child marriage and sati (widowed women committing suicide on their husband’s funeral pyre) are illegal, but both practices, especially the first, continue - the tradition of the bride’s family paying a dowry leads to female feticide, female infanticide, and dowry deaths (women murdered or driven to suicide in the attempt to extort a higher dowry). 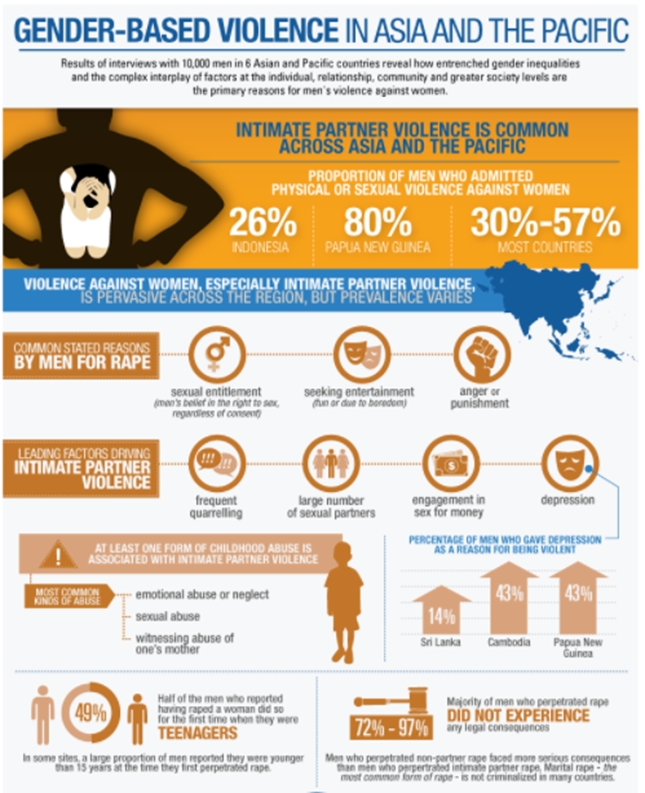 PROTECTION OF WOMEN AND GIRLS IN HUMANITARIAN CRISES

Women and girls are the most vulnerable to abuses and violence in the context of ‘humanitarian crises’ – natural disasters and armed conflicts. Women and girls are victims of violence, including sexual abuse and exploitation, at disproportionally higher rates in situations of armed conflict, post-conflict and displacement in comparison to men and boys and the consequences are disastrous. Therefore, immediate, appropriate and effective actions must be undertaken based on thorough assessment on the ground to ensure protection response and re-victimization. Moreover, victims who are willing to report abuses, to seek justice and reparation should be provided with an opportunity to do so in a safe environment without risk of retaliation and stigmatization.

Horrendous crimes committed in Iraq and Syria are greatly impacting women and girls. During the past decade and up to current days, war crimes, crimes against humanity and genocide of Yezidi religious minority have not and are not investigated, the perpetrators enjoy impunity and fear nothing. Moreover, large-scale abuse of women and girls were and are being committed by governmental agents, security and military forces, government-allied militias, coalition military forces, the ISIS and other non-state armed groups. In Myanmar, Rohingya women and girls, including pregnant, are raped and sexually abused either at home in front of their family members or in the places of displacement, in many cases gang rapes, as punishment or with the aim to extract information about insurgents or simply to be used as domestic service. Boko Haram-triggered violence in Nigeria is another terrible example of violence against girls. 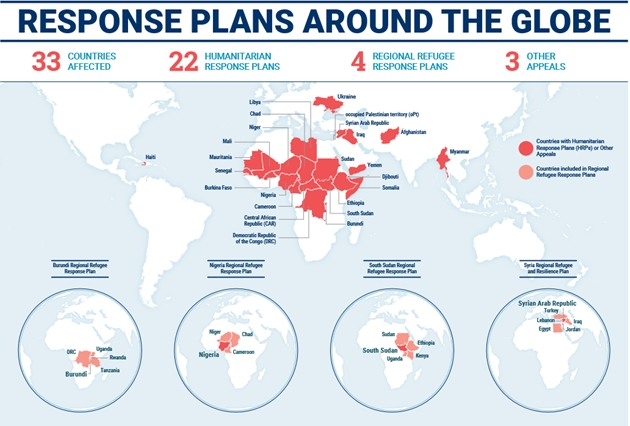 TOWARDS A WORLD OF ZERO VIOLENCE AGAINST WOMEN AND GIRLS

Geneva International Centre for Justice (GICJ) calls for states and UN agencies to improve respect, protection, and fulfillment of women’s rights in accordance with international law. The state as primary responsibility holders should ensure full compliance with the Convention on the Elimination of All Forms of Discrimination against Women (CEDAW). Moreover, states should adopt laws and implement policies to ensure women’s inclusion, leadership and protection. The states should establish mechanisms towards providing assistance to victims of gender-based violence. Moreover, GICJ considers that the international community’s response through United Nations mechanisms to gender-based violence in the context of humanitarian crises needs to be further enhanced. The United Nations should improve coordination and information sharing among its agency to ensure streamlined and efficient actions. The international community should ensure more funding to combat violence against women and girls. GICJ continues reporting and documenting human rights violations, including violence against women and girls around the world.