On 16 March 2017, Geneva International Centre for Justice (GICJ) with the International Organization for the Elimination of All Forms of Racial Discrimination (EAFORD) organized a side-event during the 34th session of the UN Human Rights Council titiled "Human Rights Education - States Obligations in preventing incitement to hatred and hate speech"

The right to freedom of expression is clearly outlined in Article 19 of the International Covenant on Civil and Political Rights (ICCPR), and it constitutes one of the fundamental pillars of inclusive and democratic societies. However, such essential liberty may be subjected to restrictions when it infringes on other people’s rights and reputations (Article 19, ICCPR). According to the (ICCPR) and the International Convention on the Elimination of All Forms of Racial Discrimination (ICERD), incitement to hatred and racial discrimination shall be firmly prohibited by law. The concept of “incitement to hatred” encompasses all theories and propaganda activities disseminating ideas based on racial superiority, particularly those inciting to acts of violence against “any race or group of persons of another colour or ethnic origin” (Article 4/a, ICERD). Furthermore, authorities and public institutions shall not be permitted “to promote or incite racial discrimination” (Article 4/c ICERD).

Despite the comprehensive legal framework defining such limits, several countries continue to promote hate speech and to conduct discriminatory campaigns. In Iran and in Iraq, textbooks, media and governmental sources constantly demonise racial and religious minorities and incentivise the spread of negative and disparaging stereotypes – thus dangerously undermining international human rights law. This side-event aimed at shedding light on the negative impact of such policies. Incitement to hatred and hateful messages promoted by national media and academic textbooks perilously increase violence, fuel hatred and have the power to shape the minds of new generations.

The side event coincided with “Debate on racial profiling and incitement to hatred, including in the context of migration” that took place on March 17, during the 34th session of the Human Rights Council. As the rights to equality and non-discrimination are cornerstones of human rights law and are substantial part of a State obligation towards the international community as a whole, the side event focused on the individual States’ response as well as on the actions of the international community in this regard.

Dr. Nabeel Ali Mohammad Alatoom holds a PhD in Political Science obtained in 2001 from the Tehran University of Law and Political Science; his dissertation focused on the Iranian foreign policies towards the Arab region from 1979 to 1997. Specialized in Iranian studies, he directed several research units, wrote over ten books about Iran and its policies, translated numerous books from Farsi into Arabic, and participated in several conferences about Iran.

Mr. Ahmed Al Quraishi, Ahmed Quraishi is a policy analyst, researcher and writer. As a journalist, he has worked extensively in Iraq, Pakistan, Lebanon, Syria, and the Gulf region, has worked for Aljazeera and authored articles in Arabic and English over the past 24 years. He is currently associated with in independent, Islamabad-based think tank projectpakistan21.org.

Mr. Tahar Boumedra, Former UN human rights chief at the United Nations Assistance Mission for Iraq (UNAMI) in Baghdad and Adviser to the Secretary General’s Special Representative for Iraq. His working background allowed him to acquire deep knowledge in the involvement of Iran in the creation of the militias in Iraq as well as its policy against other Arab countries (for instance Iraq, Syria, Saudi Arabia, and Yemen).

Dr. Nabeel Ali Mohammad Alatoom opened the side-event with an analysis of the tendency of the Iranian schooling system to foster hate speech and incitement to hatred. Iranian textbooks portray a negative image of Arabs and of the Arab culture: such practice is aimed at shaping public opinion and at broadening the support for the Iranian interventionist and aggressive foreign policy. In Iran, the schooling system emphasizes the differences between the two civilizations and the superiority of Iranians over Arabs, who are depicted as backward individuals living in tents in the middle of the desert. The minds of Iranian children are shaped from early age: in fact, further to the promotion of the superiority of the Iranian culture contained in textbooks, boys as young as 16 are forced to enrol in the military and to pledge loyalty to the Iranian revolution. Furthermore, the army is trained to protect the ideological borders rather than the actual borders: Iran’s ultimate goal is to regain control over the territories that were once part of the Persian empire, including Bahrain, Iraq and Yemen. Claiming to be the most powerful and civilised country in the region, Iran is committing grave human rights abuses and is promoting racist behaviours against Arabs and certain segments of the Iranian society.

The second speaker, Mr. Ahmed Al Quraishi, introduced the report recently released by Geneva International Centre for Justice concerning the rise of the Shia militias in Iraq. The report found that the emergence of the militia movement can be traced to the US-led invasion and occupation of Iraq in 2003. Bush-appointee Paul Bremer implemented a twofold strategy to reorganise Iraq, which was based on De-Baathification and dismantlement of the Iraqi military. The disintegration of the Iraqi army and of the institutional apparatus left almost half million well-trained and armed soldiers unemployed: such policies fuelled the resistance in Iraq. Then Bremer took another decision in which he created new Iraqi Army, Police and security Units, the majority of it are Shia militias. As Mr. Quraishi pointed out, the militias enjoy the support and the impunity granted by the Iraqi government: in fact, such armed groups are officially siding with the governmental forces and the international community in the fight against ISIS. However, there is extensive evidence that proves that militias have another agenda beyond fighting Daesh. Such groups deliberately target Sunni populations and commit horrific crimes against innocent civilians, including torture, enforced disappearance, arbitrary detention and mass killings. Furthermore, Shia militias receive weapons and support from over 17 countries, and are closely linked to Iran, which is using them to pursue egoistic strategic projects across the region. Quoting GICJ report, Mr. Quraishi warned about the dangers of the brutal sectarian and ethnic agenda of the Shia armed groups, and left the audience with an open question: what will happen in the region once ISIS is defeated? Will we be left to face another, more brutal extremist threat? 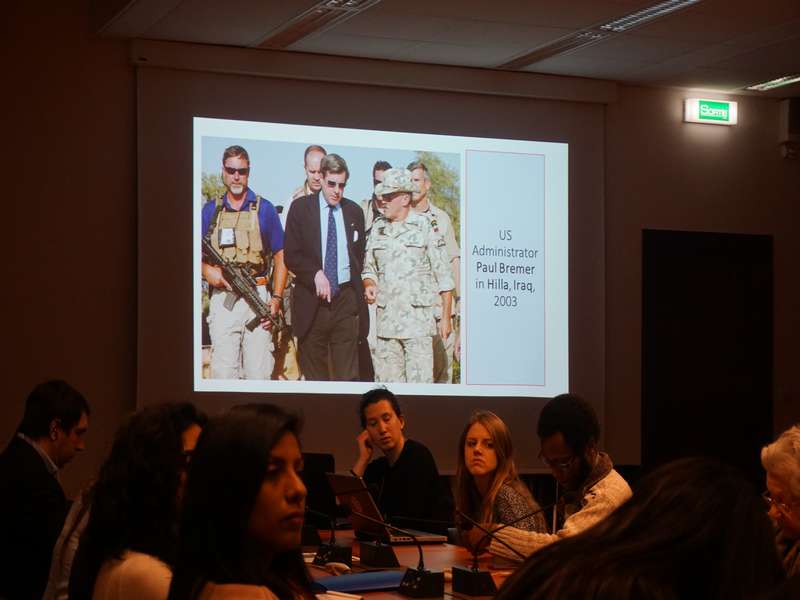 Finally, Mr. Tahar Boumedra focused on the role of journalism in the promotion of incitement to hatred. The tendency of media to promote hate speech has become widespread all over the world, including in Europe, and Muslims are often the main targets of mediatic attacks. Such practice has been initiated by Paul Bremer, who introduced hate speech based on sectarianism in Iraq following the US-led invasion of 2003. The consequences of his actions still echo today and are further exacerbated by the Iranian involvement and influence in the region. Hate speech and incitement to hatred are entrenched in the Iranian constitution and have led the government to commit crimes against humanity that, according to Mr. Boumedra, could amount to genocide. In the country, minorities are not allowed to be a part of the administrative apparatus and cannot occupy important positions. Furthermore, 3000 people have been killed without trial. Prisoners are only asked one question: “Do you support the Mojahedin-el Khalq organization?” If the answer is yes, they are sentenced to death. Such violations have been extensively documented by NGOs and by the UN Special Rapporteur on the Islamic Republic of Iran, but the powerful influence of the country along with its hate messages is still expanding.

The extensive presentations of the panelists were followed by the questions raised by the audience and by the concluding remarks of each speaker and of the moderator, Ms. Gulnoz Saydaminova, Senior Human Rights researcher at Geneva International Centre for Justice.