In a resolution (A/HRC/21/L.32) on the human rights situation in Syria on September 28th 2012, adopted by a vote of 41 in favour, 3 against and 3 abstentions, the Council condemned in the strongest terms the massacre of the village of Al-Houla near Homs, where the forces of the Government of Syria and members of the Shabbiha were found by the Commission of Inquiry to be the perpetrators of outrageous and heinous crimes; calls upon all parties to put an end to all forms of violence and to take special measures to protect women and girls from gender-based violence; urges the international community to provide urgent financial support to the host countries to enable them to respond to the growing humanitarian needs of Syrian refugees; decides to extend the mandate of the independent international Commission of Inquiry on Syria established by the Council in its resolution S-17/1, and requests the Commission to present a written report on the situation of human rights in Syria at an interactive dialogue during the twenty-second session of the Council; requests the Secretary-General to provide additional resources, including staffing, to the Commission of Inquiry in order to allow it to fulfill completely its mandate in the light of the increasingly deteriorating situation of human rights in Syria; and reiterates its call upon the Syrian authorities to cooperate fully with the Commission of Inquiry, including by granting it immediate, full and unfettered access throughout Syria. 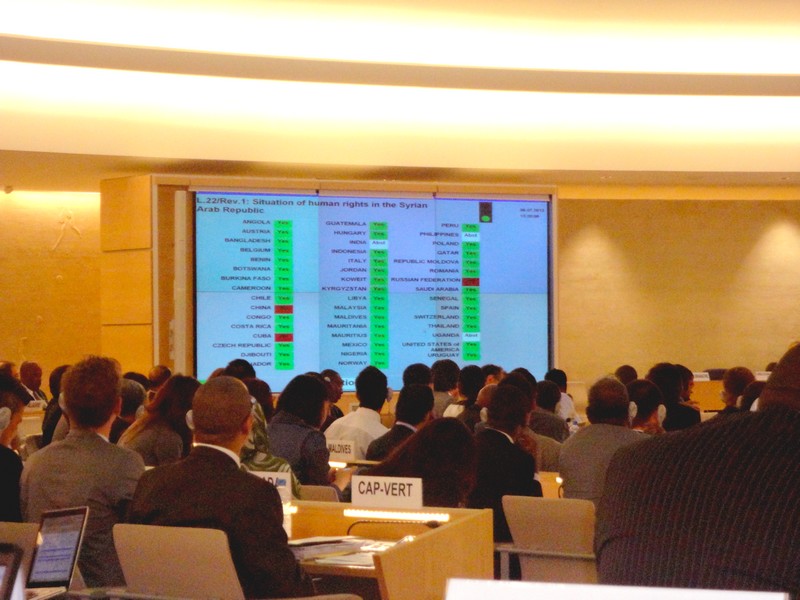 LAURA LASSERRE DUPUY, President of the Human Rights Council, on September 28th 2012, stated that taking into account the extension of the mandate of the Commission of Inquiry on the Syrian Arab Republic until March 2013, and given that the situation on the ground had shown no sign of improvement, the Commission needed to be strengthened through the appointment of two additional Commissioners. For this reason, the President appointed Carla del Ponte and Vitit Muntarbhorn as Commissioners.

Russia said that the mandate of the Commission of Inquiry had been extended. The situation on Syria had been exacerbated, the news agencies were using false information and Russia understood that it was difficult to work in such conditions. Russia called on the Commission of Inquiry to act objectively and use verified facts and avoids using information that would intensify the conflict in Syria.

On the morning of September 17th 2012, the Human Rights Council held an interactive dialogue with Paulo Pinheiro, Chair of the Independent International Commission of Inquiry on the Syrian Arab Republic. Mr. Pinheiro, introducing the Commission’s report, said that the gross violations of human rights in Syria had grown in number, pace and scale.  Indiscriminate attacks on civilians in the form of air strikes and artillery shelling leveled against residential neighborhoods were occurring daily.  There were grounds to believe that Government forces and the Shabbiha committed war crimes, gross violations of human rights and crimes against humanity; similarly, that anti-Government armed groups had perpetrated war crimes, including murder, extrajudicial executions and torture.  International criminal law held perpetrators responsible for such violations individually including superiors and subordinates and whether military or civilian; and the Commission recommended that the Council forward its report to the Security Council.

Navi Pillay, United Nations High Commissioner for Human Rights, introducing the report of the Secretary-General on the human rights situation in the Syrian Arab Republic, said that the report focused on the status of the implementation of Human Rights Council resolution 19/22 and outlined relevant developments until 20 July 2012.  It noted the further deterioration of the conditions in the country, with a rise in attacks on population centers by the Government forces, who were using heavy weapons and mechanized infantry as part of a campaign to clear anti-Government armed groups.  Government forces continued to commit numerous human rights violations, and victims again included women and children, and there were increasing reports of anti-Government forces carrying out abductions, torture and ill treatment of captured members of Government forces.

Syria, speaking as the concerned country, regretted that the report of the Commission was neither accurate nor objective, and that it neglected the fact that sanctions constituted a flagrant violation of the United Nations Charter and the principles of international law.  Syria had cooperated with all initiatives to settle the crisis but the armed groups that continued to refuse any genuine effort and to participate to the Geneva agreement had already hijacked the agreement before even departing from Geneva.  The aim of the terrorist groups was neither reform nor democracy, but the fragmentation of the Middle East into insecure Islamic Emirates.  Syria called on those supporting the bloodshed to stop supporting terrorism.

Concluding Remarks by the Chair of the Independent International Commission of Inquiry on the Syrian Arab Republic:

Pinheiro said there were still some reports that had been received after the completion of today’s submission and would be dealt with.  The Commission had not received any specific answers about sanctions.  On concrete steps to ensure accountability, he said access to Syria was needed to gather as much information as possible, and noted there was no statute of limitation on these crimes.  Mr. Lakhdar Brahim’s team should have a strong investigative element. Denmark had asked about sanctioning of gross human rights violations and Mr. Pinheiro noted that some reports had been received but information was limited.  The Commission relied on first hand information from its investigators but was in touch with other United Nations entities and bodies.  Interviews with victims were held, he added, but it was immensely difficult to get access to victims.  Once Syria was truly independent further work could be undertaken and a mechanism of transitional justice could be involved once access was established.  No interviews were taken with agents of the Government, again due to the lack of access.  Skype interviews with doctors and journalists on the ground had been held. He reiterated the call that any country with information on specific incidents should send it to the Commission, if their mandate was extended.

Ms. Pillay said that during the reporting period, her Office had received 57 notes verbales from the Permanent Mission of the Syrian Arab Republic, and the present report included the summary of the ones addressed specifically to the Office and containing information relevant to the implement of the resolution 19/22.  The High Commissioner noted the further deterioration of the conditions in the country, with a rise in attacks on population centers by the Government forces, who were using heavy weapons and mechanized infantry as part of a campaign to clear anti-Government armed groups.  Those attacks were accompanied by a rise in attacks by anti-Government armed forces, targeting Government security forces, as well as Government and civilian infrastructure.  Government forces continued to commit numerous human rights violations, and victims again included women and children, and there were increasing reports of anti-Government forces carrying out abductions, torture and ill treatment of captured members of Government forces.  More people were being killed, day after day, and civilians were bearing the brunt of the 18-month conflict.  Ms. Pillay echoed the call of the Secretary-General on both parties to immediately stop the violence and genuinely cooperate with the newly appointed Joint Special Representative, Mr. Brahimi, to find a peaceful solution to the crisis.