On the 23rd September 2016, Geneva International Centre for Justice with the cooperation of EAFORD and Women Journalists Without Chains Organization, held a side event during the thirty third regular session of the Human Rights Council, titled “Nothing is Safe”.

This side event aimed at analyzing the deteriorating human rights situation in Yemen following the Al-Houthi coup d’état and how this is affecting the whole population, including women and children.

At the beginning the Moderator, Mr. Paulo Casaca, a former member of the EU parliament, welcomed the audience and made a brief introduction to the topic in question and then presented the speakers of the side event who were: 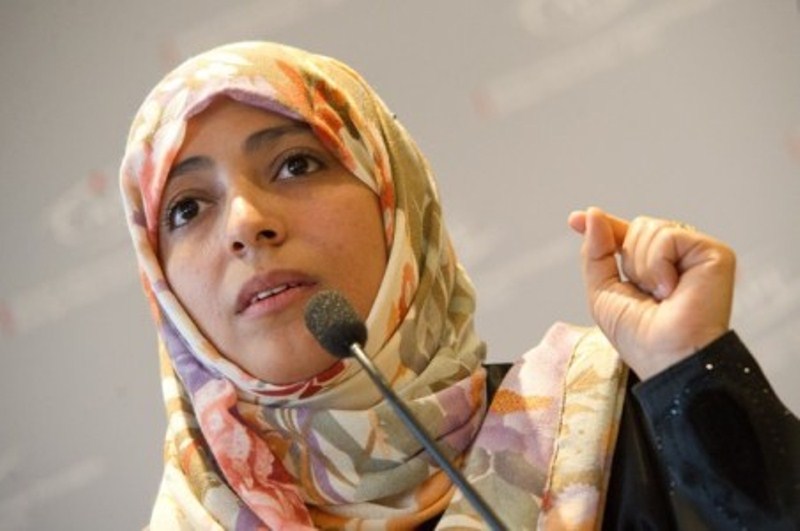 The first speaker at the event was Ms. Tawakkol Karman, who started her intervention by saying that Yemen was moving smoothly towards a peaceful democratic transformation of power before this was interrupted with the invasion of the capital Sana´a by the Al-Houthi Militias on the 21st September 2014. Ms. Karman reminded that this invasion was rejected by the international community, and that the Security Council had issued three resolutions on this regard-resolutions no. 2201, 2204 and 2216. These have supported the legitimate government in Yemen and called for unity and peace in the country. Moreover, Ms. Karman added that the deterioration of the situation in Yemen caused the Arab Allies Forces armed intervention in the country.

Afterwards, Ms. Karman continued her speech by explaining the grave human rights violations which are committed by the Al-Houthi militias. These include the besieging and invading of cities, and thousands of cases of arbitrary detention and enforced disappearance practiced against politicians, activists and journalists. Furthermore, Ms. Karman said that: “on the other hand, the raids of Arab Allies Forces, which began since the 26th of March, still mistaken their targets causing harm to civilian houses, facilities, bridges and means of transport leaving a lot of casualties and injuries among civilians”.

Then the speaker moved further to talk about the difficulties and dangers which have been faced by the field researchers of the WJWC while preparing the report to document obvious human rights violations and daily massacres conducted against civilians in most of the governorates captured by Al-Houthi militias. Ms. Karman also added, that the figures appearing in the report are not covering all the violations due to the dangerous work environment in Yemen faced by the researchers. However, the numbers stated are correct and, in most of the cases, the working team succeeded in accessing basic information such as the names of the injured or killed. Ms. Karman concluded her speech by reaffirming that: “there is nothing safe in Yemen, and whenever the war stops in one place it breaks out in another”.

Ms. Bushra Al-Surabi: The violations in Yemen will not Stop Before Stopping the War and building Peace. 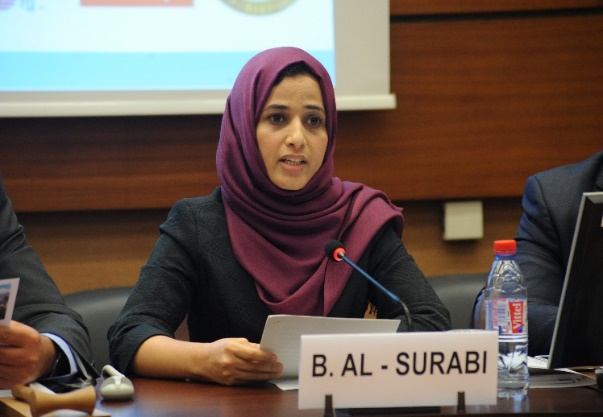 Then, the moderator gave the floor to Ms. Bushra Al-Surabi who provided a detailed explanation of the efforts made by the WJWC Organization and its field researchers in order to document the human rights violations against civilians of Yemen during a year of war from March 2015 until March 2016. Ms. Al-Surabi also stressed the difficulties faced by the team and its inability to reach many areas due to the deteriorating security situation. Some types of assaults have not been documented in an appropriate way because of boundaries imposed on the team´s work, Ms. Al-Surabi added.

Notwithstanding this, Ms. Al-Surabi indicated that the working team was nevertheless able to: “cover a big number of cases of casualties and injuries. We were able to determine the places in which the violations occurred, i.e. whether they took place in a home, a street, a school etc. We were also able to determine the means by which the violation was conducted, i.e. whether the assault has been conducted by direct shooting, shelling with heavy weapons or bombardment”.

Furthermore, the speaker said that the report allocated a special part to trace the freedom of press in the country. In this regard, Ms. Al-Surabi affirmed that “if the abuses and the deterioration of the situation of press and media associations in Yemen continues, a dark future is awaiting journalism in Yemen”.

She advised that the threats made by Al-Houthi leader, Abdel Malek Al-Houthi, against journalists in a speech delivered last September - in which he stated they are as dangerous as fighters in the wars- are particularly alarming and that journalism in the country is currently going through a dark stage.

On the other side, the speaker reminded that in spite of the violations committed by Al-Houthis against journalists, the other parts are not believing in the worthy role of journalism and mass media in the country either.

Ms. Al-Surabi finished her presentation by stressing the fact that the violations are not going to stop before the war comes to an end peace is restored. This can only happen in a context where all the country institutions are working normally and all militias are vanished. 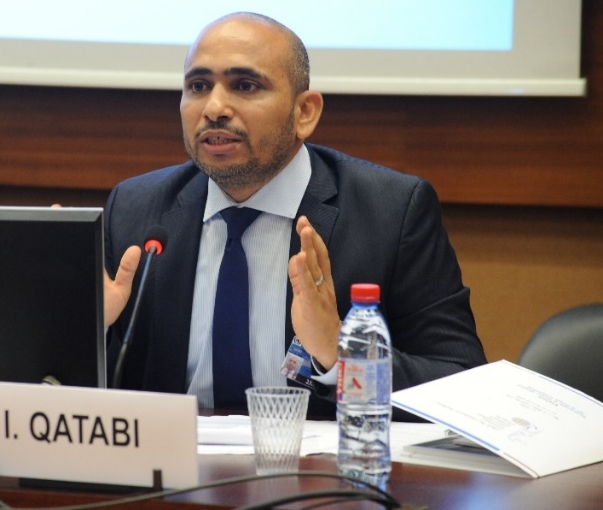 The side event then continued with the contribution of Mr. Ibrahim Qatabi, who introduced some of the numbers which have been documented in the report released from WJWC organization. He stated that the total number of casualties among civilians who have been killed by Al-Houthi and Saleh affiliated militias were about 1424, which constitutes about 50% of the total figure of deaths during the conflict in Yemen in a year. Among them, there are 308 children and 109 women. At the same time, the number of deaths caused by Arab Allies Forces were 1230 casualties, among them 313 children and 169 women.

Moreover, Mr. Qatabi added that according to the investigations made by the field researching team, most of the assaults were taking place in the streets with about 528 cases, followed by attacks on civilian houses with 513 cases. This shows that the targets were selected randomly without taking into account civilian presence.

Mr. Qatabi added that according to the results of the working team, the means which have been widely used to cause the deadly or harmful attacks against civilians were bombing with heavy weapons, and direct shooting with live bullets. 443 persons (39% of all cases) and 430 persons (38% of all cases) were harmed by these means respectively.

After Mr. Qatabi´s presentation, a short film showing the human rights situation in Yemen and the abuses documented by the Women Journalists without Chains Organization, was screened.

Ms. Hooria Mashhour: Detention and Forced Disappearance are among the Gravest Violations Practiced against the Youth of the Revelation. 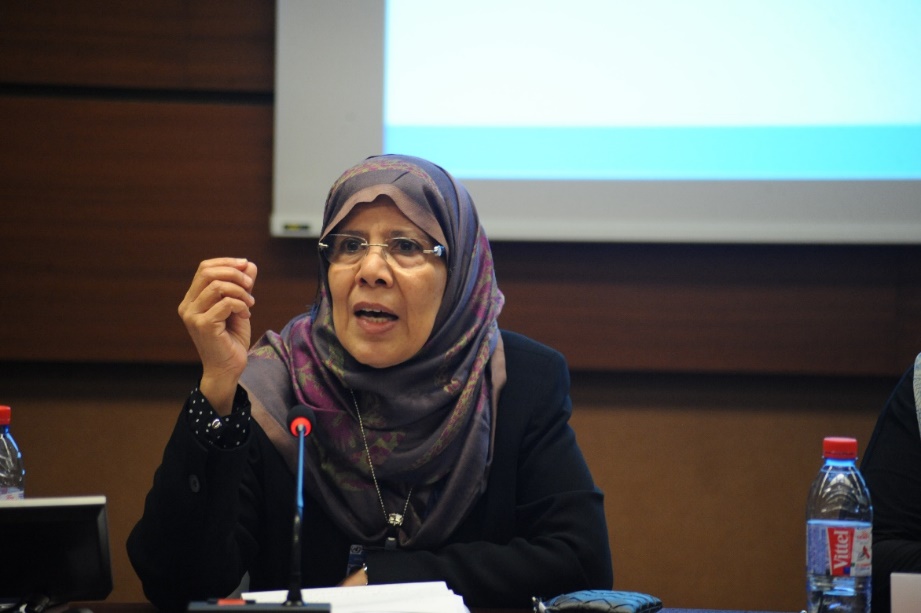 The floor was then given to Ms. Hooria Mashhour, the former Human Rights Minister in Yemen. Ms. Mashhour concentrated her presentation on the cases of arbitrary detention and enforced disappearance taking place in Yemen. At this time, she declared that about 500 persons have been detained or forcibly disappeared. Ms. Mashhour added that these acts are among the gravest violations which are practiced against the Youth of the revolution in Yemen.

The speaker also talked about the restrictions on journalism and freedom of expression which reached even social media platforms.

Finally, Ms. Mashhour said that she was carrying a message from the mothers of those forcibly disappeared or detained. Those mothers are appealing to the international community and the Human Rights Council to work on releasing their sons. Ms. Mashhour concluded by reaffirming that the coup had destroyed all the partial achievements of the new government formed by the national reconciliation.

Ms. Aswan Shaher Mohammed: Speaking about Human Rights in Yemen Became from the Past. 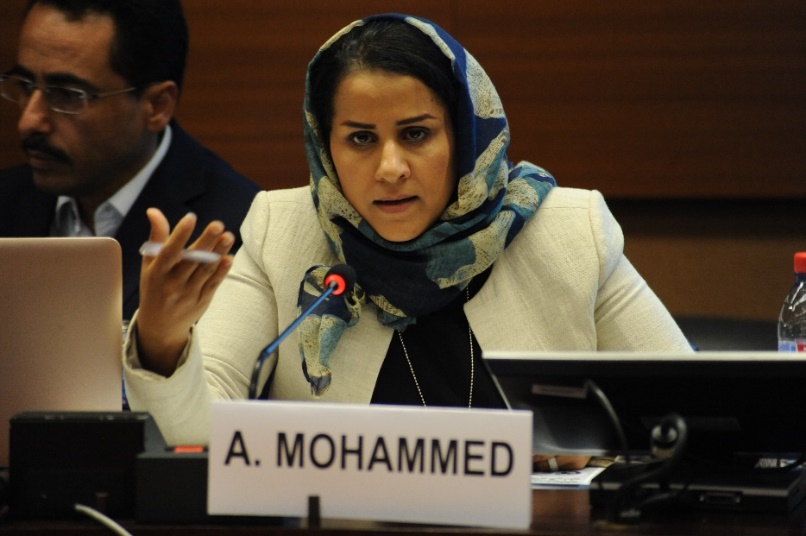 The last speaker, Ms. Aswan Shaher Mohammed, presented the ongoing violations against media associations in Yemen starting with the ministry of mass media and ending with the other formal and popular organizations and committees.

Ms. Mohammed reiterated that nothing is safe in Yemen, and that talking about rights and freedom has become something from the past. Today no voice is heard except from the Houthi’s. Yemen was one of the best countries of the region in respecting the freedom of journalism and expression. However, this freedom has largely been denied nowadays, to the largest extent experienced in over a decade.

The speaker added that the National Dialogue Conference had approved the freedom of journalism and the freedom of thoughts and opinions, and that it prohibited to arbitrarily arrest anyone on this basis Moreover, it forbad to arbitrarily shut down media or press stations. This was to be considered a rather advanced level of freedom of expression in Yemen, Ms. Mohammed said. However, the Houthi’s coup destroyed everything and the situation of journalists deteriorated dramatically and their freedoms disappeared.

At the end of the side event, an interactive dialogue between the audience and the speakers began. A lot of questions were asked and valuable interactions were made. Finally, the audience thanked the organizers of the side event, as well as Women Journalists without Chains Organization for its efforts in issuing the report which documented the human rights abuses in the country, regretting its inability to document on a larger scale. The speakers answered the questions and explained more on the circumstances and the dangers that surrounded their work, and also shed light on other violations occurring in the country.