Fallujah faces monumental destruction as the militias enter the city

On the 29 June 2016, Geneva International Centre for Justice (GICJ) sent an urgent appeal to the High Commissioner for Human Rights, Mr Zeid Ra’ad Al Hussein, with regards to the dramatic results of the operation “Liberate Fallujah”, started over a month ago (22nd May 2016) under the pretext of reconquering the Iraqi city from the so-called Islamic State of Iraq and Syria (ISIS) terrorist group.

This last letter was a follow up to several previous appeals the organization sent to the UN Office of the High Commissioner for Human Rights in the past few weeks, which certainly evidenced that this military operation, carried out by the Iraqi army along with its affiliated militia units, is proving as destructive as GICJ preannounced it would be.*

GICJ is particularly concerned with the human rights violations occurring along with the advancement of the Iraqi army inside Fallujah. Despite the assurances of the Prime Minister al-Abadi, as well as of the leader of the military campaign, that the militias belonging to the umbrella organization al-Hashd al-Shaabi would not be allowed to enter the city, it appears that the opposite has in fact just happened.

Our organization has received sufficient amount of evidence to prove that not just al-Hashd al-Shaabi has freely entered the city, in clear contrast with the promises of the Iraqi authorities, but it has already proceeded destroying what it found on its way. Private properties and houses have been burnt to the ground and all private belongings have been stolen – we have received pictures and videos of militiamen leading their vehicles loaded with pieces of furniture through the city. 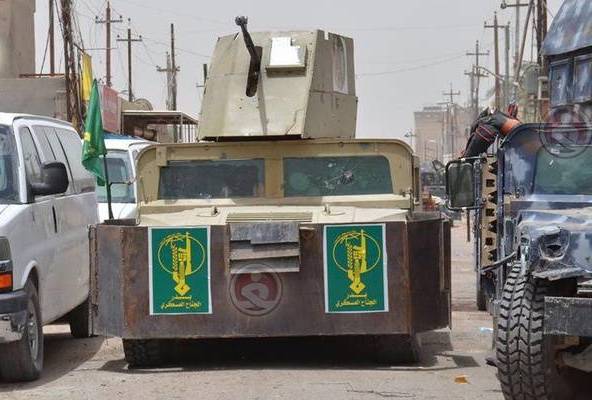 The destruction that these groups are bringing as they flooded the city is almost total and it is to the detriment of civilians only, which are losing everything they own. Mosques have also been a popular target of the militias, fact that once again highlights the sectarian nature of their actions. This is not an unusual pattern and should not come as a surprise: we have witnessed militias looting, burning and destroying cities such as Ramadi, Tikrit, Amerli and Jurf al Sakhar on a purely sectarian basis in the past and GICJ well predicted the same fate for Fallujah. The OHCHR and other UN bodies are fully aware of such events.

The Mayor of Fallujah, Issa al-Aisawi, confirmed that the control of militias of certain areas always translates into major destruction, and advised that all the information about the violations were reported to the Prime Minister and all responsible political parties, but no measure has been taken in order to stop them.

The Council of al Anbar, part of the Central Government, also confirmed the ongoing destruction of the city at the hands of militias as well as reporting to the Prime Minister that such groups are conducting summary executions against those who are fleeing the conflict, as GICJ has also largely documented in its previous appeals to the UNHCHR. In particular, Deputy of the President of the Al Anbar Council, Mr Falih al-Aisawi, has delivered a statement in which he advised that militias are setting fire to mosques in Fallujah and that they are moving around the city with big trucks loaded with civilians’ private belongings. Unsurprisingly, this has fallen to deaf ears and the members of the governorate have instead been threatened by the militias leaders to not speak up. 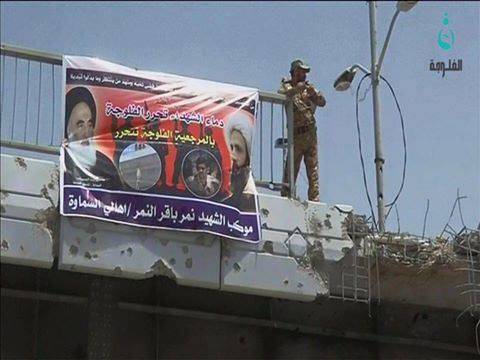 The military commanders as well as the police units are indeed aware of the crimes perpetrated by the militias, yet they do not intend reporting them nor stopping them, but instead they keep denying the evidence, fomenting even more the already well-established policy of impunity that such groups have been enjoying for so long.

As GICJ previously documents in its various press releases, reports and urgent appeals, there is a large number of people who have been missing since they have fled Fallujah and turned to the militias, and in particular to the Badr Organization and Iraqi Hezbollah, in search for help and assistance. In particular, GICJ is acutely concerned with the over 800 persons who were abducted by the al-Hashd al-Shaabi militias and the federal police in Saqlawiya and al-Sajir on 2nd-5th June 2016. These people have disappeared and GICJ fears that they might have now faced the same fate as the other 300 persons who have been executed in the same days. Despite the efforts by the Al Anbar Council to get information in regards to their whereabouts, no detail has yet emerged, leaving dozens of families deeply concerned.

Different sources report that the number of those missing can amount to thousands of persons. Besides, an estimate of 20,000 persons are in held under the custody of the Iraqi army and the local police in al-Amariya in degrading and inhuman conditions, mostly deprived of water and food. Among them, 2,220 were detained for alleged accusations of belonging to ISIS. The investigation procedure to verify whether they have ties to ISIS is proving extremely slow.

The situation is indeed too critical to be ignored and it urges immediate action to find the missing civilians and bring them back to safety before it is too late.

The situation of refugees

As the fight in Fallujah intensifies, the humanitarian situation of those who manage to escape the city and the fury of the militias worsens day by day. People, especially women and children, lack any sort of assistance and support for the satisfaction of their basic needs to keep themselves alive. Most of them do not have access to tents or any sort of shelter, have to sleep in open-air and cannot protect themselves from the torrid heat and indeed are massively lacking food and water to survive. Most predictably, there is no access to healthcare either, which is mostly affecting children, elder people and those who were already suffering from illnesses. Even those who are lucky enough to sleep in tents are still in extreme danger due to the precarious conditions in which they have been left. 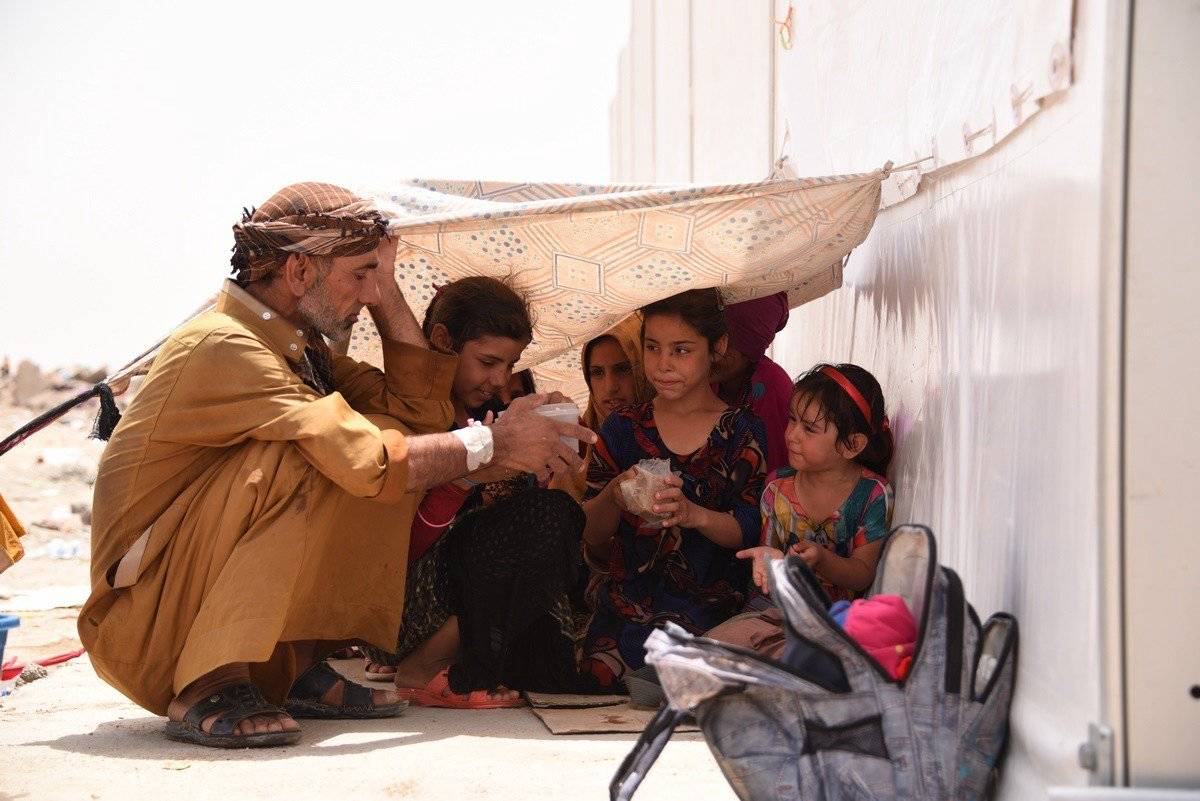 Once more, GICJ wants to reiterate the failure of the Iraqi Government to fulfil their obligations to prepare the necessary assistance and shelter to displaced people before starting the campaign. With an exponential increase in the number of refugees to up to an estimate of 100,000 persons, such striking lack of planning, before and during the conflict, has indeed led to complete chaos. However, no assistance plan or strategy is on the government agenda. Furthermore, the little humanitarian assistance which has been delivered by NGOs and other humanitarian organizations has in part fallen into the hands of militias, and, in any case it is certainly not enough to support the high number of displaced persons. The United Nations, which are largely aware of such humanitarian crisis, need to take urgent measures to deliver more humanitarian assistance to displaced persons as well as pressuring the Iraqi Government to immediately act in this respect too.

As we tirelessly mention in each and every appeal to the OHCHR, the sectarian intentions behind the actions perpetrated by the militias are evident, and indeed amount to genocide and ethnic cleansing.

All the evidence collected in this past month and in previous occasions clearly underline that the Iraqi authorities are undeniable complicit to such crimes: they are fully aware that the militia units that they affirm to “control” (whereas they are instead ungovernable bodies which merely act according to their own rules) are carrying out crimes of all levels. The leader of al-Hashd al-Shaabi has himself confirmed that his militias are in Fallujah. Pictures and videos of all sorts have been uploaded on the Internet and several social networks by members of the militias to proudly show the destruction they are provoking. Despite the evidence of the brutality of such groups is under everyone’s eyes, the Iraqi authorities, including the military commander of the al-Fallujah operation, have chosen to deny it and cover it up instead. By doing so, they are encouraging such sectarian campaigns to continue and allow its perpetration over and over again.

Many innocent lives have been spared since the beginning of the military operation against Fallujah. The degree of destruction has now reached unprecedented levels due to the advancement of the merciless militias into the city, making Fallujah just one of the many pile-up of rubble across Iraq. The fury of these groups is like a tornado which indiscriminately wipes away whatever is on its path. The difference is that whereas tornadoes are unpredictable and unstoppable, militias actions can and have to be predicted and stopped at all costs.

Vague and vain promises by an irresponsible and careless government to bring those responsible of the crimes to justice are not enough. GICJ has urged the High Commissioner for Human Rights several times and urged him once more in its latest letter to take a clearer and stronger position in these regards to condemn the human rights violations as well as the war crimes committed by the militias and report them to the Human Rights Council in order for it to dispatch an independent commission of enquiry, as the Iraqi authorities most clearly cannot be relied upon when it comes to conduct an impartial and independent investigation.

What is happening in Fallujah is a deplorable proof of the evil that human beings are capable of, and, as such, it is in the interest of the whole international community to immediately act to put an end to it.

This can be achieved in many different ways, such as firmly stopping the support, funding and cooperation of the involved parties with militia units and implementing more human strategies to combat terrorism instead. ISIS will not be defeated by these brutal military operations, as it has proved many times in the past. Each time the Iraqi army has “liberated” cities from the terrorist group, no evidence has been provided as of to any ISIS fighter being captured. On the contrary, the authorities claimed that somehow the fighters have managed to “sneak out” of the city. In a context where the victims of the fight against terrorism are most clearly always the civilians, a new strategy rather focusing on the elimination of those conditions which give fertile terrain to the growth of extremism must be implemented.

GICJ wants to reiterate once more that the respect for human rights of civilians in time of war is sacrosanct and shall be preserved by the United Nations on the basis of its very mandate and scope.

* To read GICJ previous appeals on the same subject: