With US cover and Iranian support, a war of extermination against Fallujah starts 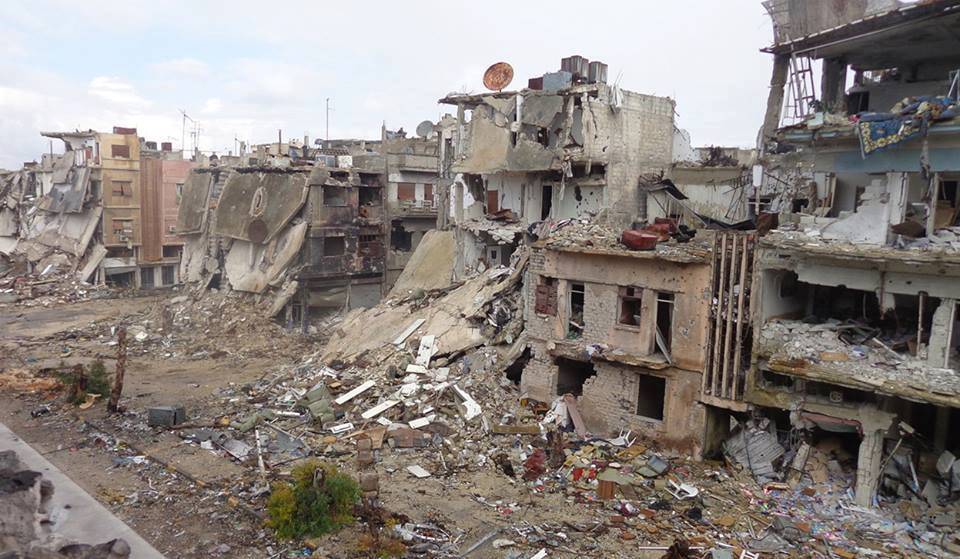 Geneva International Centre for Justice (GICJ) sent an urgent appeal to the Secretary-General of the United Nations, Mr. Ban Ki-moon, and the High Commissioner for Human Rights, Prince Zeid Ra'ad Zeid Al -Hussein, and to all UN member states to do whatever is in their power to stop the military campaign being waged against the Iraqi city of Fallujah, which is supported by US air cover and Iranian military advisors and sees the participation of sectarian militias dominating the Iraqi army units.

What is happening in Iraq now may amount to genocide. Operations targeting unarmed civilians, among sectarian lines were clearly confirmed by many statements from military commanders and leaders of affiliated militias under the so-called al-Hashd al-Shaabi (Popular Mobilization Forces), as well as religious leaders accompanying them, which have encouraged their members to destroy the city and have no mercy towards civilians. Such operations are also in flagrant violation of the rules of international humanitarian law and the Geneva Conventions, especially the 1949 Convention (IV) relative to the Protection of Civilian Persons in Time of War., as well as a breach of the rules of international human rights law.

Geneva International Centre for Justice strongly believes that fighting terrorist groups through wide-scale military campaigns has proved to only lead to the killing of civilians and the destruction of cities, which are turned into uninhabitable places, while the terrorists most often manage to escape. The United Nations knows that very well, especially as, in early 2016, they evaluated the consequences of the complete destruction of the Iraqi city of Ramadi, which is now just another pile-up of rubble.

The civilians in Fallujah are paying the highest price. The result of the aerial bombardment carried out on the evening of the first attack (Sunday, 05/22/2016) has been the death of civilians, including 11 members of one family, according to official Iraqi sources. During the next day (Monday, 05/23/2016), Fallujah Teaching Hospital declared to have received the bodies of 10 victims of the bombing (including five children and three women), as well as 25 wounded (including twelve children and eight women). The toll reached on Tuesday 05/24/2016 16 civilian deaths and more than 40 wounded, most of them children and women. Medical sources attribute this to the insistence of the militias, especially Kata’ib Hezbollah, Saraya al-Khorasani and Asaib Ahl al-Haq to target the civilian neighbourhoods with Katyusha, Grad and Balrajmat missiles. 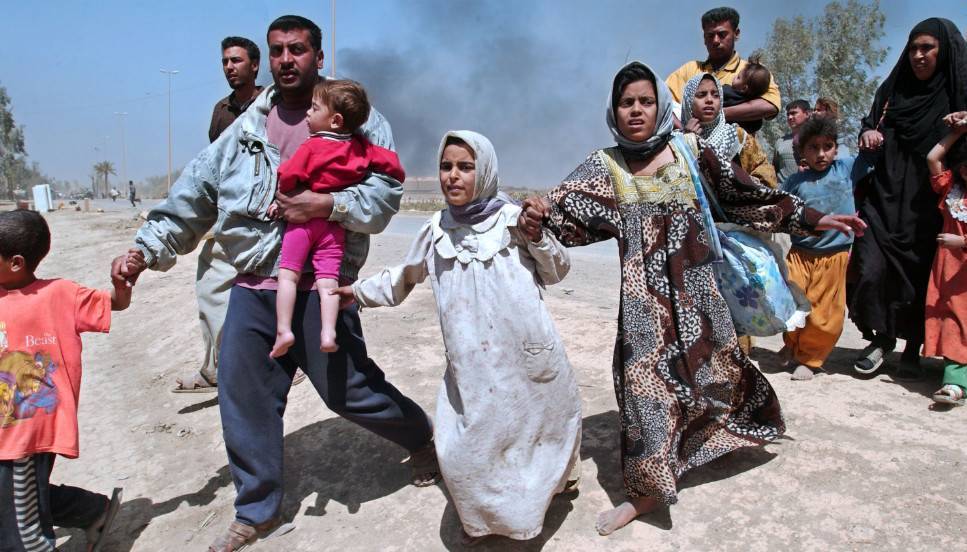 Therefore, it is imperative that such useless military campaigns are immediately stopped and that another approach is undertaken to address the causes of growing terrorism in accordance with the strategies of the United Nations for preventing and combating terrorism adopted in September 2006. It is also worth to take into careful account the Plan of Action announced by the Secretary-General on 15 in January 2016, which stresses in paragraphs 4, 5 and 6 that there is wide international consensus that security-based counter-terrorism measures undertaken over the past two decades by the international community to address violent extremism have proved to be ineffective and insufficient. Instead a holistic approach that includes preventive policies and procedures to limit the violence and extremism, in accordance with international standards and consistent with Member States' obligations under international law and international human rights law, should be implemented (document a/ 70/674, dated 12/24/2015).

The Iraqi prime minister, Haider al-Abadi, has announced on Sunday 22nd May 2016 what he has defined as a battle to “liberate Fallujah”, from the Islamic State (IS) fighters.

According to official sources, among others the UN, the city is still hosting about 100,000 civilians who are now risking their lives under the bombardments. In a hurried attempt to address the matter of potential civilian casualties, the Iraqi army has called for citizens in Fallujah to leave the city through what they defined as “secured routes that will be announced later”, also demanding all the families that are unable to get out of the city to raise a white flag outside of their houses, in order for the army to be able to distinguish them from IS members. Even at the eyes of an inexpert, this plan seems rather utopian: first of all, no “secured route” has yet been provided, and the attack has already started. Furthermore, past events have proved the complete disregard of the Iraqi army and the militias for civilians, who instead of being rescued, have been killed or imprisoned once they managed to escape the cities. In other words, this seems to be an alleged attempt of the Iraqi government to lead public opinion to believe in their truth concern for civilians. If such efforts to protect civilians were genuine, a more detailed and precise strategy would have been implemented by the authorities to either evacuate the city before the attack started or at least to provide necessary protection and shelter to those who might eventually make it out of it. 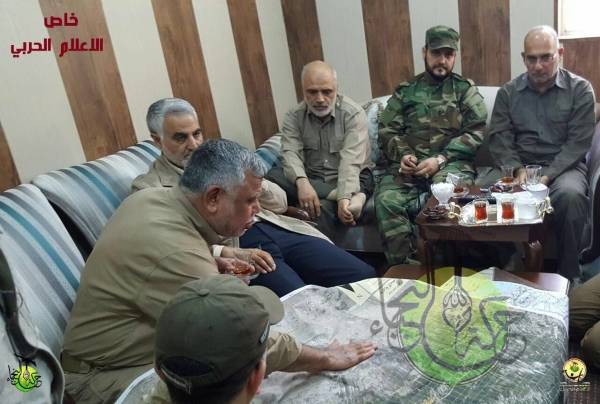 The picture above reportedly shows the Iranian General Qassem Suleimani in the Hashd
operations room with commanders of several Iraqi paramilitary groups.2

Since the 2003 invasion and occupation, the city has been exposed to several military campaigns including the two US-led campaigns of 2004, resulting in its almost complete destruction. On the top of that, in more recent years, the government forces along with militiamen have been systematically carrying out attacks in the city in the form of sectarian military operations, which resulted in multiple massacres. Since the beginning of 2016 Fallujah has also been sieged, and all food and medicine supplies, including humanitarian aid, were prevented from entering the city. The latest campaign seems to be just another indiscriminate attack, which can as well constitute genocide, at the expenses of Fallujah civilians.

Once more, the attack is supported by Iran, as previously mentioned, in particular by the Revolutionary Guards, which have provided the Iraqi army with weapons and ammunition carrying signs and pictures of sectarian connotations too, in a clear preannouncement of what it prospects to be the umpteenth sectarian conflict. The role played by Iran is also worrying as it shows that the country does not give any weight to human rights.

GICJ believes that what makes the situation even more controversial is the support of the United States, one of the five Permanent Member States of the UN Security Council, for the murderous militias through providing them with above said air cover. These militias are highly benefiting from the US support which has proved fundamental in order to perpetrate the deadly campaigns against unarmed civilians, on the basis of doctrines of mere sectarian hate.

Predictably, in fact, the “reconquest” of Fallujah will not differ much from previous liberations such as of Ramadi, Tikrit, Baiji or Jurf al Sakhar, which brought to the absolute destruction of the cities as well as the killing of many innocent civilians. GICJ finds that what happened there was not less than genocide, accompanied with the destruction of most infrastructures, private houses, shops, public buildings and farmland thus transforming the cities into uninhabitable places and achieving the systematic process of displacement pushed by sectarian ideologies, mostly directed against the Sunni Arabs.

The residents of those cities and many more across the country were, in fact, denied return to their homes because this very devastation had made it absolutely impossible for them to come back as all their resources have been permanently damaged. The UN has defined the destruction of Ramadi as “staggering” and possibly the worst that Iraq has ever witnessed.1

Furthermore, it does not seem coincidental that the beginning of battle of Fallujah coincided with demonstrators storming the Green Zone on Friday 20th May 2016, which has been the second riot in just three weeks, ended with the killing of four protesters and the wounding of about 110 other persons. Perhaps this synchronization confirms that the authorities want to divert attention away from the demands of the demonstrators and their chronic failure to respond to the loud cries of the Iraqi people, which are simply calling for improvements to their living conditions and for their basic rights to be restored after they have for far too long been neglected.

GICJ would like to reiterate that it is in strong favour of the elimination of terrorist groups from the cities of Iraq. However, the policies so far adopted, not just in the country but in general across the globe, have only proved deleterious to civilians and their cities and have only resulted in the increase of terrorist groups and their brutality.

In these regards, it is therefore highly demanded that the United Nations put enough pressure on all involved states to change their approach in the fight against terrorism with immediate effect to one that fully reflects those principles outlined by the Conventions and declarations that they have themselves ratified. It is always important to bear in mind that extremism can also arise out of misery and rage, and, events as such, perhaps foster rather than diminish the threat of new fighters.