Since the 1st of October 2019 Geneva International Centre for Justice (GICJ) has been sending letters and urgent appeals to the international community, especially the UN Secretary General, President and members of the Security Council, the High Commissioner for Human Rights and Human Rights mandate holders as well as UN member states and the President and members of the EU Parliament. Today, 17 October, GICJ sent an updated appeal to all the above-mentioned bodies.

Summary of the situation

GICJ has been receiving on-the-ground reports of ongoing and systematic human rights violations in Iraq since the protests began in July 2018. While the protestors’ demands are genuine (ever since 2003, Iraq has been a hotbed of governmental corruption and has suffered continuous economic and social decline) the Iraqi leadership repeatedly refuses to respond to their demands. Instead, they are using brute force and violence to crush the protests. GICJ has received reports that the security forces and militia are using tear gas, rubber bullets, live rounds, machine guns, and bubble grenades, to disperse the demonstrators.

We also noted that these killings are deliberate and intentional, mostly initiated by the militia and the personnel guards of the Prime Minister. Many have been shot in the chest and the head by snipers deployed on the rooftops of buildings around the demonstration areas. This is a shocking and flagrant disregard for human rights law and UN values, such as the right to life. Such organised and intentional killings of the demonstrators amount to serious crimes against humanity under international law. As such, real and urgent action by the international community is undoubtedly required.

Unfortunately, the reports being published in the media are giving an erroneous view of the current events, since the Iraqi government is trying hard to stop the spread of news concerning the demonstrations. Many TV stations have been cut, the internet is being closely controlled to stop the spread of news about the demonstrations, and many of our journalistic colleagues and other NGO members have been intimidated to stop them from participating in or writing about the demonstrations.  Some of them have even received envelopes with bullets inside – a clear sign that they were being threatened to be killed.

Furthermore, it is the opinion of GICJ that the promises of the Iraqi government to deal with the issue should not be taken seriously. For one, the authorities have repeatedly failed to fulfil their promises in the past.

Moreover, while the Prime Minister may have announced the creation of an investigation committee to examine the accusations of intentional killings, the demonstrators assert that he is a key part of the problem. They assert that it was he who ordered the killings to take place – continuing the corruptive influence he has maintained since 2003. Moreover, this commission includes the leaders of the key forces that participated in the attacks against the demonstrators, such as al-Hashd al-Sha’bi militias (the Popular Mobilization Forces) These brutal militias are seen as most responsible for the killings, as well as for other grave human rights violations throughout the country across the last four years. Thus, all those leaders must be held accountable for the killings of the demonstrators not to be on board of an investigation commission.

Furthermore, the demonstrators suggest that Sistani, the Shi’a leader who called for the investigation to take place, is equally corrupt. Rather than claiming to support the demonstrators’ cause, he should be held to account for empowering the corrupt regime leaders and for covering the crimes they have instigated against the Iraqi people. As such, GICJ is calling for the launch of a separate, independent and international investigation, that would investigate the involvement of the elites in such crimes as well as those not in positions of authority. 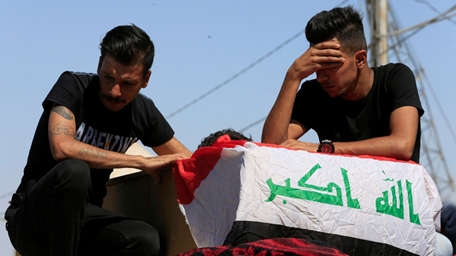 Yesterday, the 16th of October, GICJ received information that the government forces have waged a campaign of arbitrary arrests against those who participated in the demonstration or who have appeared in the media showing their support to the demonstrators’ demands to end the governmental corruption and human rights violations. Similar campaigns were conducted in other Iraqi cites. The government viewed those arrested as creators of chaos. 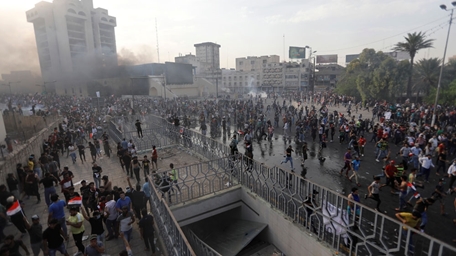 Geneva International Centre for Justice (GICJ) repeated its previous appeals to the international community to take immediate action on these urgent issues. We urged the international community to put pressure on the government of Iraq to stop using violence against protesters. We also asked to respond directly to the request of the Organising Committee of the Demonstrations in Iraq, and called on the UN concerned bodies to dispatch an international, independent investigation commission to investigate all the human rights violations in Iraq including the recent one, and to hold the perpetrators accountable.

GICJ on demonstrations in Iraq since July 2018