Geneva International Centre for Justice (GICJ) alerted the United Nations High Commissioner for Human Rights Ms. Michelle Bachelet calling to attention three urgent issues in Iraq; namely, enforced disappearances, the situation of prisons, and human rights defenders. In a letter on 14 February 2019, GICJ called on the high Commissioner to take immediate action on some on the most urgent issues in the country and urged her to pressure the Iraqi government to act swiftly to release the detainees, to shut down the secret prisons, and to work with the international community to ban all militias in Iraq in order to end the stream of human rights violations. 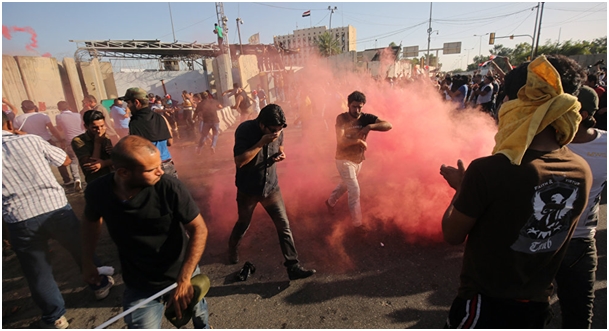 Demonstrators in Iraq are often met with excessive force by authorities.

GICJ explained to the High Commissioner the problem of enforced disappearances in Iraq that has grown dramatically in recent years. In previous letters to the Office of the High Commissioner, GICJ documented the cases of disappearances in Iraq and has sent lists of names of disappeared persons from several places who went missing in a very short period of time.

GICJ mentioned the small positive developments over the last two to three months where some of the disappeared persons were found and explained that they were released without notification to their families and in poor physical state. The released detainees have been kept by militias in Jurf Al-Sakhr, south of Baghdad, which has been under the control of militias since 2014 when all inhabitants were forced to leave by the militias and were prevented them from returning. GICJ received confirmation that the militias were operating secret prisons in the area but the government of Iraq has consistently denied any knowledge of or involvement in cases of enforced disappearance.

In its letter to the High Commissioner, GICJ stressed the urgency to prioritize the issue of disappearances and asked the High Commissioner to pressure the Iraqi government to ensure the release of all remaining detainees, to make the details about Jurf Al-Sakhr known, and to hold the militias and their leaders accountable. Thousands of families are still seeking information on the whereabouts of their loved ones – GICJ also calls for action to free the remaining detainees and seek justice for the victims.

GICJ also brought to attention secret prisons and the abhorrent situation in all prisons and detention facilities in Iraq. Hundreds of thousands of detainees and prisoners held by governmental forces and militias across the country has resulted in severe overcrowding of detention facilities and has led to the use of buildings and rooms for detention that were designed for other purposes. GICJ noted that facilities lack basic services, including properly functioning toilets, and detainees are denied food and medicine. The United Nations Assistance Mission for Iraq (UNAMI) has reported on the poor conditions of prisons but the government and militias have not yet allowed UNAMI to meet with prisoners in order to investigate or verify the conditions of facilities or the treatment of prisoners. 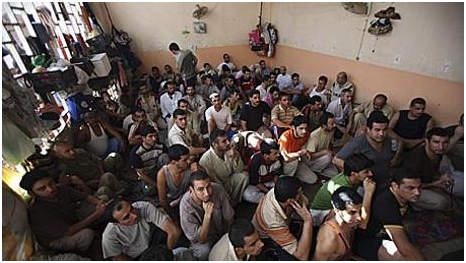 Iraqi prisoners in a crowded facility.

In the letter, GICJ illustrated the dire situation prisoners face. Militias in charge of prisons often confiscate medicines brought by families of the prisoners for their benefit. Multiple militias have checkpoints along the road to prison that they often use to take money and medications from family members that are intended for prisoners.

GICJ believes this denial of prisoners’ basic needs is inhumane and is often deliberately used to torture detainees. Adding insult to injury, the visiting family members, who are usually elderly female relatives since men or close relatives attempting to visit a prisoner are likely to be arrested, are also subjected to humiliation by the militia.

Among the prisons in Iraq, the most urgent situation is the Al Hout prison in Al Nasirya. This prison hosts former high-ranking government officials, many of whom are elderly, and are regularly subjected to ill treatment where several have died in custody. They are denied visits from family members and the ability to receive needed medicines.

Lastly, GICJ highlighted and described the many restrictions and human rights violations, including the possibility of torture or death, that human rights defenders face in Iraq. As the physical infrastructure, services and security in the country continue to deteriorate, the treatment of human rights defenders worsens. Many of the people who have led and participated in demonstrations against the deplorable situations in various cities have been kidnapped, detained and tortured to stop their activities.

GICJ named and detailed the accounts of a number of human rights defenders, among others, Mr. Mehdi Salah, a demonstration leader, who was detained on 15 July 2018. After being released, he described how he was severely beaten and interrogated as to whether he was a Sunni or Shi’a. Mr. Ghassan Saeed Abdul Hussein was detained on 8 August 2018 and tortured repeatedly by security forces who tried to force him to confess to being associated with a terrorist group. On 14 August 2018, security forces attacked a peaceful gathering near an oil facility, taking several people into custody including one leader, Mr. Harith Al-Selmi, who was severely beaten to the point where his skull was fractured. Mr. Al-Selmi died on the way to hospital and his body was left outside by the security forces. As recently as 2 February 2019, Dr. Ala’a Al-Mashthoub, a prominent novelist from Karbala, was gunned down with 13 bullets. Dr. Al-Mashthoub had criticized the country’s sectarian policies and militias and had participated in numerous demonstrations. GICJ noted that security forces regularly detain demonstration leaders, subject them to torture, and hold them until they sign a document committing not to participate in any future demonstrations. Unknown social media accounts are also used to discredit leaders with accusations about unrelated issues and alleged links to terrorist organizations.

Human rights defenders are also targeted outside of the context of demonstrations. On 25 September 2018, Ms. Souad Al-Ali, president of a prominent local human rights organisation in Basra who spoke about human rights issues to the media, was attacked and killed in broad daylight. A noted lawyer, Mr. Jabbar Abdul Kareem, who was defending a group of demonstrators in a court proceeding, was shot with 15 bullets and killed in front of the Basra police station by an armed group in July 2018. Another defender, Mr. Jalal Al-Shahmani, was kidnapped by an armed group from a restaurant in Baghdad over three years ago in September 2015. His whereabouts are still unknown. 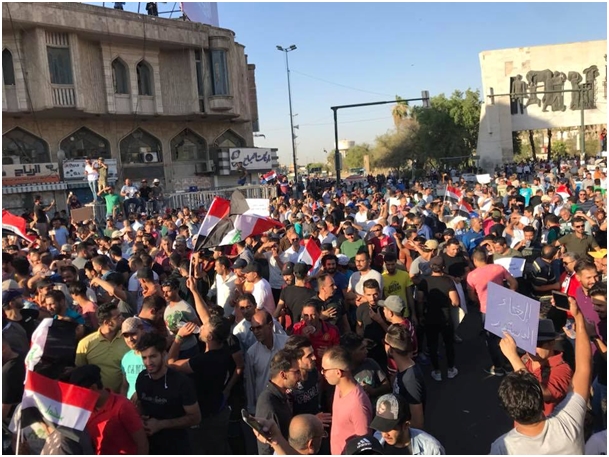 GICJ mentioned that the media as also been increasingly targeted. In Basra, security forces repeatedly restrict the freedom of journalists by preventing coverage of demonstrations. Media workers covering demonstrations are accused of inciting unrest, and journalists are beaten, humiliated and threatened to stop covering demonstrations or face arrest. Media offices in Erbil have been raided and lawsuits were filed against a broadcaster for reporting on the potential manipulation of the local market in medicines by the major political parties.

Even though the Iraqi people have been protesting the rampant corruption in the government, journalists face threats and murder when they report about instances of corruption. GICJ spotlighted Mosul as an example, where a television crew was arrested for reporting on reconstruction in the old city of Mosul, even though the story was a positive one. Parts of Mosul have been restricted to the media and require a special permit for journalists. Despite the frequent reports of these acts, the Iraqi government consistently fails to act and allows the militias to continue threatening and committing violent acts against human rights leaders, journalists and other defenders with total impunity.

Furthermore, GICJ urged the High Commissioner to work with the international community to ban all militias in Iraq. The never-ending stream of human rights violations perpetrated by militias must stop. However, it is critical that the banning of militias does not result in their being incorporated into the regular armed forces. If that happens, Iraq’s military, which already suffers from too many former militia members within its ranks, would simply replace the militia as the country’s leading perpetrator of human rights violations.