GICJ condemns all forms of violence against children under any circumstances 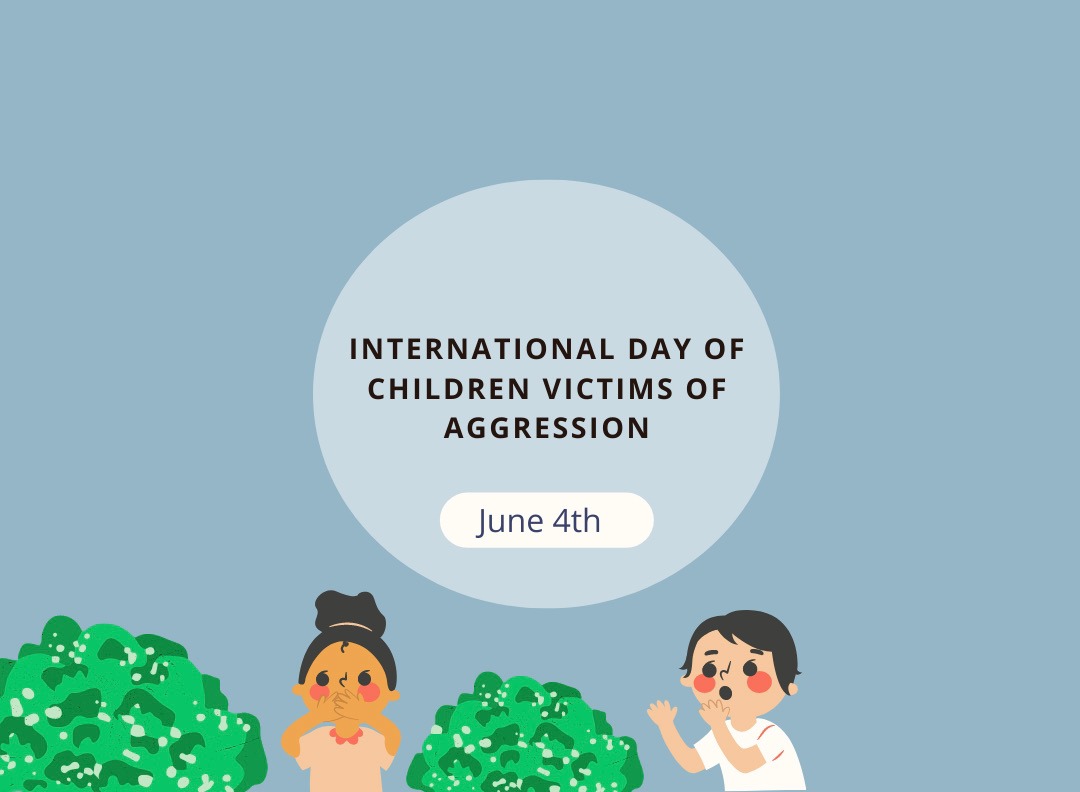 The repercussions of armed conflict are enormous; the international community has witnessed the deathly consequences for all parties involved for decades, especially children. The powerlessness put them on the target of abuses and atrocities; their families, houses and life have been taken away. On 19 August 1982,  “appalled” by the number of Palestinian and Lebanese children victims Israel murdered, the United Nations of General Assembly (UNGA) decided to mark 4th June as the International Children Victims of Aggression [1]. This observance day aims to invite the international community's attention to continuously preserve and protect the rights of the children and the remembrance of the mental and physical suffering they have suffered during the conflict.

Despite the worldwide outrage over Israel's murder of innocent Palestinian children, it was not enough to stop the oppressor. The Sabra and Shatila massacre took place between September 16 and 18, 1982. The bloodbath in the two Palestinian refugee camps southwest of Beirutwas carried out by a Lebanese militia under Israeli control.  At the height of the assault, the militia numbered about 400 and the killing went on all day with summary executions, house demolitions and looting of private property such as money and jewelry. Corpses lay in the streets, abandoned under the ruins or bulldozed into mass graves. Witnesses saw many people being bundled into trucks and driven out of the camps to unknown destinations. No one knows what happened to them. They are the "missing" from the Sabra and Shatila massacre. According to official sources, the number of deaths amounted to 3,500.

Horrified by the Sabra and Shatila massacre and noting with deep concern the dire need of the Palestinian victims of the Israeli invasion for urgent humanitarian assistance, UNGA upheld the seventh emergency special session on this matter [2]. Aside from the question on the use of force by Israel, the panel discussed the concern on exceptional attention to the alarming casualties of Palestinian and Lebanese Children, which led to establishing 4th June as the International Day of Innocent Victims of Aggression [3]. The date was taken by the beginning of Israel’s massacrein Lebanon.

UNGA Resolution Number A/ES-7/L.7 (UNGA Res A/ES-7/L.7) was adopted through a roll-call vote with 102 countries favour, two against, and 34 abstaining[5]. The resolution condemned Israel for its invasion of Lebanon, which inflicted severe damage on civilian Palestinians, including heavy losses of human lives, intolerable sufferings and massive material destruction. Countries that abstained, such asSweden, Colombia and Canada, underlined the selective manner only for the respected nationalities or one side only, while the rest (Norway, Ireland and European Community) believed that humanitarian assistance and funds would be more appropriate [6]. Those who supported the resolution praised the mission of children’s protection and expressed their sympathy for all victims [7].

Notwithstanding the different views among states, UNGA Res A/ES-7/L.7 has triggered other collective actions in protecting children during and out of the armed conflict context in the next few years. UNGA continued the legacy of Res A/ES-7/L.7 by the adoption of Resolution Number 51/77 in 1997, following the Graca Machel Report, in recommending the appointment of Special Representative of the Secretary-General for Children and Armed Conflict by the Secretary-General, and Resolution Number 62/141 in 2008 with the same request to appoint Special Representative on Violence Against Children [8].

Even after four decades of the Israeli Aggression, Palestinian Children still become the target of threat and violence from this occupying power on a daily basis.  Within the period 2021-2022, more than thousands of children of Palestinians have suffered from diminished access to education and healthcare [11], and hundreds may be displaced from their homes [12]. The authority also imposed “security” offences to arbitrarily detain about 200 Palestinian Children, primarily because of throwing stones [13]. This treatment has nothing to compare with the total fatalities during May 2021, which includes the day when the United Nations Office for the Coordination of Humanitarian Affairs claimed as the highest number of Palestinian casualties in a single day since 2005 [14].

To this day, Israeli forces have repeatedly violated their obligations under international law by using live ammunition, resulting in a pattern of unlawful killings and injuries to civilians, including children. 57 Palestinians have been killed by Israeli forces in the occupied West Bank since the start of 2022. Just on May 25, 2022, Ghaith Rafiq Yamin, a 16-year-old Palestinian boy, was shot and killed by Israeli occupation forces during a military raid in the vicinity of Joseph’s Tomb in the occupied West Bank city of Nablus. Following news of his death, classmates gathered at the hospital to bid farewell to their friend.

Although, under international law, civilians may never be targeted under any circumstance, investigations and evidence collected demonstrate that in most killings, Israeli forces used lethal forces which amounts to extrajudicial and willful killings – such killings are war crimes.

Children are entitled to general protection under International Humanitarian Law (IHL), the same as civilians during international armed conflicts (Fourth Geneva Convention) and non-participants in hostilities during non-international armed conflicts (Common Article 3 to the four Geneva Conventions). IHL also governs special protection for children, including but not limited to the right to care and aid, unity of the family, education and personal rights [15]. IHL uses different references to age limit in terms of definition, but fifteen years old has become the common standard [16].Parties to the conflict are prohibited from recruiting those under fifteen and, at the same time, bound to give special protection under IHL to children under fifteen who take a direct part in hostilities.

Since 1996, the office of the Special Representative of the Secretary-General for Children and Armed Conflict held the mandate to strengthen the protection of children affected by war by raising awareness, promoting relevant information, and building international cooperation. In 1999, United Nations Security Council (UNSC) adopted a resolution to take the issue on its agenda and also identify the six grave violations of children in times of war, i.e. killing and maiming, recruitment or use of child soldiers, sexual violence, abduction, the attack against schools or hospitals, and denial of humanitarian access [17]. The Special Representative has been running 19 action plans in different conflicted countries such as Afghanistan or Syria and several campaigns or movements, for instance, the Global Coalition for Reintegration of Child Soldiers and the ACT to Protect [18]. On 15th-16th March 2022, United Nations Human Rights Council (UNHRC) held the forty-ninth session for interactive dialogue with the Special Representative, focusing on the annual report for December 2020-2021. The Special Representative raised its concern about the unprecedented challenges of protecting children in the conflict zones over the years due to the Covid-19 Pandemic and the sustained high number of grave violations against children [19]. According to its report, the Special Representative alerted theimpeeding result of the Taliban administration since August 2021 on child protection related programs while at the same time listed violation by Afghanistan National Army for the recruitment of child soldiers. In the interactive dialogue between members of UNHRC with the Special Representative, the speakers addressed the urgent need for collective action for children victims of Russia’s aggression in Ukraine. The speakers questioned the Special Representative in respect of immediate action to help the Ukrainian children, who, despite remaining under threat of the attack, also dealt with limited access to basic necessities during the winter season in the country.   Until the end of May 2022, the United Nations Office of the High Commissioner for Human Rights has verified the Ukraine civilian casualty covering the death of 93 boys, 100 girls, and 69 children and the injury of 112 girls and 137 boys, as well as 166 children[20].

According to the UN Sustainable Development Goals (UN SDG) figures, at least 50% of the world’s children experience violence each year.  Whereas every seven minutes, a child is killed by violence somewhere in the world [15]. Given that, the existence of the Convention on the Rights of the Child and other international human rights law instruments is vital to ensure the safety and well-being of all children. The convention obliges the international community, especially state parties, to guarantee the fulfilment of their fundamental rights and protection from the threat of violence. Even though IHL defines a child soldier as someone who is above fifteen and taking direct part in hostilities, the Optional Protocol to the Convention on the Rights of the Child on The Involvement of Children in Armed Conflict (OPAC) contributes to setting the minimum age into eighteen years old [16].

The Special Representative on Violence against Children was first appointed in 2009 to advocate the prevention and elimination of all forms of violence against children. On 15th March 2022, the Special Representative presented its report for interactive dialogue in the UNHRC forty-ninth session. While noting the point of the Special Representative of the Secretary-General for Children and Armed Conflict, the representative pinpointed the rising urgency to end violence against children following the impact of Covid-19 and humanitarian crises resulting from conflict, climate change and natural disasters [17].The representative works on several action plan covering study, global survey, or expert consultation with United Nations human rights bodies and mechanisms, national institutions, and civil society organisations [18]. Additionally, it promotes campaigns, among others, on the ratification and implementation of international human rights instruments on children like OPAC and Protocols to the Convention on the Rights of the Child Sale of Children, Child Prostitution and Child Pornography [19]. These days, the action plan of the Representative is in line with the United Nations in the UN SDG 2030 Agenda Goals 16 Target 2, namely the target to end all forms of violence, abuse, and exploitation of children[20].

Geneva International Centre for Justice (GICJ) condemns all forms of violence against children under any circumstances, either during or beyond the armed conflict. Lesson learned from Israel's Aggression in 1982, every fourth of June will always remind the international community of its commitment to the most vulnerable member of humankind, children. On the fortieth anniversary of the International Day of Children Victims of Aggression, even with the special status guaranteed by international law, actors in armed conflict around the world (e.g., Ukraine and Palestine). They still treat children as the target of the attack, or worse, deploy them to battlefields. Protocol of Convention of Rights of the Child and Geneva Conventions firmly prohibit the recruitment of child soldiers; the legal discrepancy between these two regulations shall benefit the children.

All actors also need to bear in mind the significance of preserving the children's survivors in times of war by means of proper conciliation and education; otherwise, this prolonged physical and mental suffering will compromise their future. This mission aligns with zero tolerance of violence against children in the setting outside armed conflict aligned with the progressive development of their living standards, i.e. education, health, and welfare. GICJ gives our high appreciation to all the dedication put by the representatives involved in this movement, most notably the key stakeholders mandated by the United Nations. GICJ also calls for immediate ratification by the remaining states on the instruments of international humanitarian law and international human rights law related to children’s protection and further implementation from the state parties.