Today, exactly 19 years after the invasion of Iraq by the US and the UK in March 2003, Iraqi people are still waiting for justice to be made. Their immense suffering must be recognized by the international community and all those responsible for the invasion and occupation must be held accountable.

In recent weeks, we have all been troubled by the unlawful Russian intervention in Ukraine and the countless lives lost. In this conflict, as in others, innocent civilians are paying the heavy price of war. Most of the UN member states as well as various UN bodies have condemned the invasion and have declared that it is in clear breach of international law.  While we agree with this position, we wish to underscore an apparent double standard: The international community condemns Russia for invading Ukraine but remains silent in the face of the illegal invasion of Iraq by the United States and the United Kingdom.

Nineteen years after the invasion of Iraq, the country remains in a constant state of terror and destruction as a direct consequence of the occupation. The irreparable harm caused by this illegal intervention has not yet stopped: During the occupation, the civilian population suffered from systematic and gross violations of human rights, including torture, extrajudicial executions, trafficking of persons and arbitrary arrests, not to mention the one million people who enforceably disappeared and whose whereabouts remain unknown.

Until today, Iraq suffers from the collapse of its institutions, which have failed to provide essential social services, education, healthcare, and clean drinking water. Nineteen years after the invasion, minimum standards of life are still not met. These circumstances are further accompanied by failure of the rule of law, flagrant impunity and profoundly ingrained corruption which have only increased the difficulty for Iraq to rebuild itself. All of this, on the backdrop of the environmental damage resulting from the use of phosphorous and depleted uranium by the invading forces.

We must emphasize, that the failure to hold those accountable for the grave crimes committed against Iraq and its people have only fostered the climate of impunity and the total destruction of the fabric of Iraqi society by the imposed sectarian regime.

To this day, the UN has neither condemned the illegal invasion and occupation of Iraq, nor the attempts by neighbouring countries to divide the country. While all efforts to address the plight of the Iraqi people are welcome, one cannot help but be outraged that only certain invasions are strongly condemned, while the invasion of Iraq remains absent from the international agenda.

Geneva International Centre for Justice urgently calls the international community to establish an international and independent tribunal to investigate and prosecute all those responsible for the planning and execution of the Iraq War, and for their violations of International Humanitarian Law and International Criminal Law which include war crimes and crimes against humanity. We call for this international tribunal to be mandated to provide due process to those accused to ensure accountability and bring justice. 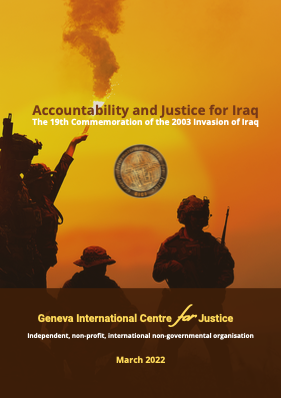