On Saturday, 18th September, Yemen’s Houthi militia publicly executed 9 people (including 17-year-old) they charged for the killing of Houthi leader Saleh Al Samad in 2018. After accusing over 60 Yemeni and a number of Western leaders of being responsible for Al Samad’s death, they finally shot the nine they believed were spying for the coalition. Before they were executed, the nine had been held in arbitrary detention, where their lawyer said they had been subjected to torture and degrading treatment. The group was sentenced to death after an unruly trial, causing outrage in the country. This is not extraordinary or surprising, since the Houthis have been reported to detain more than 900 people and to disappear over 350 between 2016 and 2020 alone.
Relatives said they did not believe the Houthis would act on their threats. But the militia had the victims face the ground and shot them in the back on a public square in Sana’a, while hundreds were watching. They broadcast the executions on screens and distributed photos of the killings afterwards. Such methods point to the Houthis’ characteristic use of fear to foster allegiance and establish legitimacy. 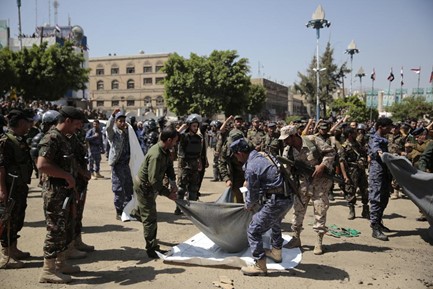 The conflict in Yemen lasts since 2014, when the Houthi militia took over the Northern capital of Sana’a where they have been exercising power through terror ever since. The Houthis are known to be backed by Iran, with evidence of arms supply. On the other hand, the Government of Yemen is backed by a Saudi-led coalition responsible for the protracted blockade of the ports and airports which causes the ongoing famine in the country.

Meanwhile, the Yemeni civilian population is paying the price of what is understood as a proxy war between Iran and Saudi Arabia. Human rights violations rage on, despite numerous pleas from the United Nations Human Rights Council to return to peaceful negotiations. The execution comes less than a week after the Yemeni civil war and humanitarian crisis was discussed in the Human Rights Council on last Tuesday, 13th September.

GICJ considers that unfair standards of trials such as the one leading to the execution must be considered illegitimate. The extrajudicial killings performed by the Houthis must be accounted for. For this reason, we call for the opening of a criminal investigation to establish responsibility for those performing human rights violations in Yemen. Civilians of Yemen are being caught in a conflict they need to be freed from as soon as possible.