On the second day of the 48th session of the UN Human Rights Council, 14 Sep 2021, the group of experts on Yemen presented their report to the UN Human Rights Council. The update on Yemen´s dire condition is bleak: the world´s worst humanitarian crisis is deepening, as the blockade continues and thousands are left to starve. Civilians are the primary target, as both  the Houthi militia and the Saudi led coalition conduct an average of 10 airstrikes a day. Peace negotiations are deadlocked and both parties seem committed to spread fear. The Group documented grave human rights violations performed by the Houthi militia. Among other cruel practices, Houthis perform incredible levels of sexual violence on their detained victims. 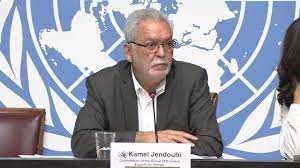 Enforced disappearances and arbitrary detention are instrumental to each parties’ goal of obtaining legitimacy. Such practices, the Group reports, are engineered to silence dissent and establish rule through fear. Specifically targeted by enforced disappearances are journalists and human rights workers who are subjected to detention, torture and killed. The Group has noted the wide-scale and pervasive nature of recruitment of boys and girls by the Houthi as well as by the Saudi-led coalition. The Group reiterates its concern that parties to the conflict continue to launch indiscriminate attacks prohibited under international humanitarian law. These acts constitute war crimes under international law.

During the reporting period, the Group of Eminent Experts investigated the case of a woman who was allegedly forcibly disappeared and arbitrarily detained by the Houthis in 2018, under false accusations of “working with the aggression”. She was taken from her workplace by a group of five Houthi armed men and two Houthi armed women, held in solitary confinement for three days without food, water or access to a toilet, and then transferred to a cell with inmates accused of murder. During this period, she was subjected to daily interrogation, threats and torture.

GICJ reiterates that efforts are due from all parties involved to end the conflict according to the UN Security Council resolutions. Furthermore, GICJ urges parties to respect their obligations to take all feasible measures to protect civilians from the effects of hostilities, and to abide by the principles of distinction, proportionality and precautions in attack.