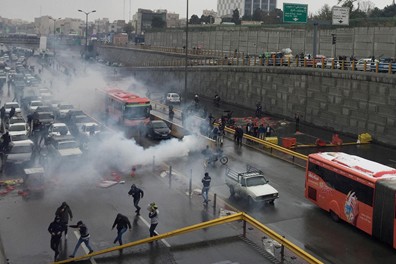 Geneva International Center for Justice condemns the disproportionate use of violence and arrests against the protestors in Iran, and calls upon the international community, especially the United Nations, to pressure the Iranian government to respect the right of freedom of assembly, expression, and peaceful protest of the Iranian people.

There are images of protestors burning the Iranian flag on busy freeways and shouting for the overthrow of the government. Protestors have attacked and set fire to government buildings and state-run banks. Iran’s leader, Ayatollah Ali Khamenei, has been particularly targeted by protestors, who criticize the leader for living in luxury while the majority of the country lives in poverty. Iranian officials have responded disproportionately to these protests by shooting tear gas, firearms, and water cannons at the protestors; there have even been reports of snipers being used against the protestors. Inside sources report that 50 people were killed in Al-Ahwaz, 44 were killed in Kurdistan, 12 killed in Fars, and multiple other deaths in other cities. Other sources estimate the total number of deaths to be around 200 people. It has been difficult to get an exact number since the government has cut off almost all Internet access within the country, in an attempt to reduce information about the protests reaching foreign journalists.

Protests in Iran began on Friday, 15 November 2019, due to the government’s announcement that the price of petrol would increase by 50% to 15,000 rials per liter and there would be a limit on the total number of liters available for each car. The government has justified this price increase by stating the additional revenue would be allocated to Iranian citizens in need of cash subsidies. However, this has created strong outrage among the Iranian people, with many of their anger directed towards the government.

The Iranian people’s dissatisfaction towards the Iranian government stems from the current economic turmoil in the country, one that has worsened due to the United States reinstating sanctions on the country last year. However, while the US sanctions on the country have caused the price increase of many commodities, it is the weak structural foundation of the Iranian economy and the government’s management of it that has resulted in this strong reaction from the people. Multiple reports and UN side events by GICJ shows Iran’s meddling in the internal affairs of surrounding countries, which further proves how mismanaged funds and resources are within the government.[1] The Iranian government used state resources to support local militias in Iraq, Yemen, and Syria to secure hegemonic influence over the region. Embezzlement of government funds towards foreign military groups and governments and not prioritizing domestic economic issues has served as a catalyst for the Iranian people’s protest against Ayatollah Ali Khamenei’s regime.

Protests over the economic conditions within Iran have plagued the country for the past several years. Since 2017, there have been numerous and repeated protests over the economic policies of the country, building on top of existing distrust and resentment of the government. While these protests have originally begun due to increased prices of basic goods, it has been used to additionally protest the corruption of Ayatollah Ali Khamenei and his government. These protests have proven to be one of the biggest organized protests against the government since 1979, with more than a million Iranian citizens taking to the street for the past several years. As the protests continue, the Iranian government should reconsider its domestic economic policies to ensure the support of the people.

Geneva International Center for Justice reiterates its demand for the international community to pressure the Iranian government to respect the rights of the protestors. GICJ appreciates the concerns by UN human rights experts over the reports of killings and injuries and the nation-wide Internet shutdown, as well as calls for the government to respect the rights to freedom of opinion and expression, and peaceful association and assembly. However, GICJ urges stronger action by the international community to ensure the human rights of the Iranian people and protestors against unfair and disproportionate violence by the government.

[1] More information can be found here.