The analytical report “Human Rights Violations in Iran” provides an overview of Iran’s despicable human rights record and of the sectarian agenda that the country is implementing in the region. While the international community is mainly focusing on the nuclear deal and on Iran’s nuclear policies, Geneva International Centre for Justice believes that the abysmal human rights violations perpetrated by the Iranian government against ethnic and religious minorities should not be ignored.

As GICJ noted in its report, acts of ethnic and religious discrimination specifically target the Hazaras, Pashtuns, Balochs, Azeris, Baha’i, ethnic Arabs and non-Shiites. As highlighted in the research, Hazaras migrated to Iran from Afghanistan in the 1990s and, because of their Afghan origins, they are subjected to all kinds of abuses. Moreover, with 27 million individuals in Iran, Azeri constitute the largest ethnic minority of the country; however, they are denied the right of receiving education in their own language and all peaceful protests are brutally repressed by governmental forces.

As pointed out in the research, the Baha’i are one of the most discriminated groups in Iran: in fact, such religious minority is under constant observation and is deprived of fundamental rights, including the right to education. Furthermore, as examined in the report, Balochis living in the provinces and Sistan and Balochistan and cultural and ethnic Arabs living in the province of Al-Ahwaz are subjected to similar types of discrimination – the two groups are the poorest in the country and are often denied basic rights and fundamental freedoms.

In its report, GICJ provided a comprehensive overview of the human rights violations committed by the Iranian government, in particular against the just mentioned ethnic and religious minorities. The abuses perpetrated include torture and denial of the right to fair trial: in fact, the Iranian Code of Criminal Procedures of June 2015 fails to guarantee adequate access to independent lawyers or medical care, and does not include clear provisions that prevent and prohibit the use of torture. As such, prisoners endure prolonged solitary confinement, flogging, blinding and amputation.

Moreover, Iran remains one of the top executioner countries in the world, with most death sentences handed down after unfair trial. Finally, ethnic and religious minorities are often forcibly displaced, forced to live in highly polluted areas, and denied the right to freedom of expression and peaceful assembly – with the government systematically detaining and prosecuting journalists and peaceful protestors.

GICJ reports continues with an analysis of Iran’s involvement and interference in the Arab region. In order to export the principles of the Islamic Revolution developed by Ayatollah Khomeini, Iran is persistently interfering in Iraq, Syria and Yemen, in particular by providing financial and military support to violent militias fighting in such countries. Furthermore, on 18th August 2016 Iran officially announced the formation of the United Shia Liberation Army (USLA) to be deployed in the war-torn Arab countries under the command of Major General Qasseem Soleimani.

Finally, GICJ highlighted the failures of the international community and the double standards applied in bilateral and multilateral relations with Iran. In fact, as noted in the report, the lifting of sanctions on Iran in relation to the nuclear deal failed to address the human rights record of the country. On the contrary, the billions given to Iran are likely to be employed in the funding of terrorist organizations operating in the region, including the Lebanese Hezbollah, the Popular Mobilization Front in Iraq, some fronts in Syria and the Houthis in Yemen.

In its concluding remarks, GICJ expressed its concerns for the growing interference of Iran in the Arab region and for the lack of accountability for the human rights violations endured by ethnic and religious minorities in the country. While Iran should respect international humanitarian and human rights law both at home and abroad, the international community should stop prioritizing strategic and economic interest and ensure that the Iranian government acts in a transparent and responsible manner. 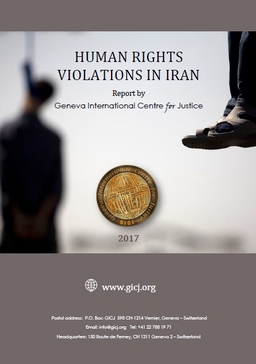