Globally, doctors enjoy a high degree of respect in society for their work in curing, healing, and upholding people’s fundamental human rights, specifically the right to life and health. In this regard, doctors could be considered human rights defenders. The United Nations holds the work of human rights defenders in extremely high regard, and hires a large number of doctors in WHO, UNHCR, and its regional refugee/migrant protection bodies, among other bodies. However, despite this global esteem, in Iraq, doctors face not only a lack of respect but also actual threats to their safety and lives.

In addition to doctors, the healthcare sector in Iraq is suffering from numerous other structural and systemic barriers. One of the most troubling is the involvement of unqualified people in the medical care field. Firstly, there is interference from people in positions of power in the distribution of doctors to hospitals, which leads to a shortage of doctors in remote areas. The Ministry of Health also has allowed people without any medical training or background to gain licenses to practice, and to open clinics and pharmacies. In these medically underqualified practices and pharmacies, medicines are often outdated, unauthorized, or homemade and are sold merely for profit-making and for no medical benefit.

This issue traces its roots to the 2003 US-led invasion, during which hospitals were attacked and looted, first by invading forces and later by the Iraqi government and militias themselves. Following this, equipment was not replaced and remains outdated, under-maintained, and insufficient to meet the needs of the people. Since then, doctors have implored the government to replace this equipment and provide funding for healthcare infrastructure. These needs have not been met. In addition, supply of medication is gravely lacking in the country, including those medicines that need to be imported from other countries.

This is particularly unfortunate when viewed in the larger context of Iraqi healthcare’s history. Between 1960-1991, Iraq’s healthcare sector, with its modern hospitals and well-trained doctors, was among the most advanced and flourishing in the region. The health budget was, on average, about US$450 million annually out of a total annual budget of about US$20 billion (about 2.25% of the national budget). At that time, income from Iraq’s oil sector was put to good use to allow free healthcare services to be made available for the majority of the population. Healthcare and its infrastructure were safe and sanitary. 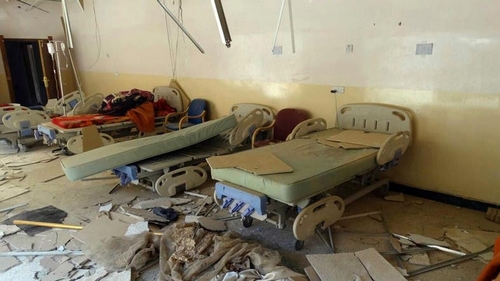 Post-invasion, however, Iraq has totally failed to provide adequate support for healthcare. In 2019, out of a total national budget of US$112 billion, only a bit more than one billion dollars was allocated to healthcare - that is less than one percent (approx. 0.9%). What is worse, much of the one billion that is allocated to healthcare never materializes due to corruption at every level of governance. Most of the wealth of the country is syphoned off in corrupt schemes, leaving few resources available to update the healthcare system and infrastructure. Monetary gain, rather than the health and well-being of the people, is the focus of corrupt government schemes. One way in which this corruption manifests in the healthcare sector is when heads of medical institutions submit to the government lists of fake names for staff members who don’t exist, in order to gain a greater share of budget allocations for the institution, which they then pocket. Thousands of such fake names have been found. In addition, corruption in other sectors has direct implications in the healthcare industry. For instance, in the electricity sector – frequent power cuts mean that crucial and potentially life-saving operations sometimes must be conducted by torch light. 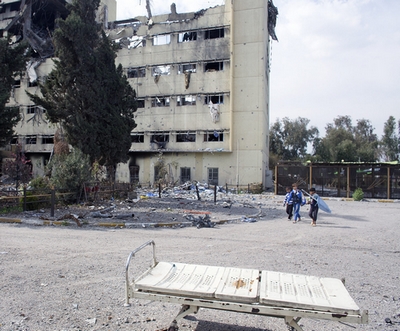 The medical sector is in grave need of better infrastructure, since even in intensive care, there is a huge lack of hospital beds and gurneys which are not replaced even after these facilities are attacked. Additionally, and most problematically, there is a lack of oxygen cylinders, which puts patients with pulmonary or cardiac disorders at grave risk. For doctors, through no fault of their own, all of these issues lead to immense trouble and risk to their lives.

On the one hand, doctors in Iraq lack access to facilities and governmental support, seriously hindering their ability to heal. On the other hand, the people, who are unable to enjoy high standards of healthcare, blame doctors for the lack of governmental support and poor infrastructure. In this sense, doctors face a double-edged sword, and support from neither side.

Being a doctor in Iraq entails earning $4.50 per hour, being banned from getting a graduation transcript, and enjoying no support or protection in the emergency room. Most chillingly, being a doctor means running the risk of getting killed by the relatives of dead or sick persons, as quickly as one hour after their death. This is despite doctors doing everything in their power to cure illnesses, working with the limited resources they do have. The media only adds fuel to this fire by blaming doctors themselves for the government’s lack of support and the systemic infrastructural deficit, and by encouraging violence against them. 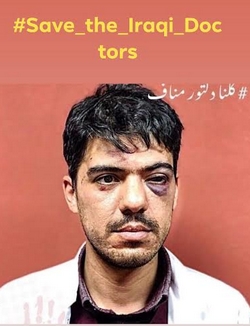 One example of a doctor facing such risks is Dr. Manaf Rafie Yassin, of the Azadi Hospital in Kirkuk. He was assaulted on Monday, 18 February 2019, by the family of a 70-year-old patient whose condition was impossible to save. Once her family was informed of her death, the doctor was beaten up, merely for delivering the medical verdict.

Another example is that of Dr. Osama Kurdi in the Diwaniyah district. He is the only specialist in Diwaniyah and has been since 2004. Recently, he was consulted in a case involving a young girl named Rafeef who needed a bronchoscopy. The hospital did not have the required technology for this procedure, even though Dr. Kurdi had been asking the government for the funds to acquire it for a long time, and so Dr. Kurdi referred the child’s case to another hospital. However, due to delays in the referral, the child unfortunately did not survive, and passed away on 25 July 2019. Her family, instead of recognizing the fault of the government in not making crucial medical infrastructure available, filed a case against Dr. Kurdi, threatening and defaming him. 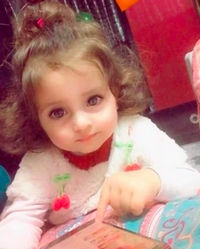 As a result of mindless targeted violence like this, fewer and fewer doctors are going into the profession, and many are leaving Iraq to practice elsewhere in the world. They do so to avoid both the violence in Iraq as well as the massive monetary fees they have to pay to the relatives and families of their patients to avoid this violence. Some reports say, for instance, that of 348 doctors who graduated from one institute in 2009, 285 had already left the country within ten years. Around 20,000 doctors have fled Iraq in the last 15 years, as per a joint study by ICRC and Iraq’s health ministry. It is time the Iraqi government realized the danger of a situation where there is a need for doctors, but none to be found, because of misdirected fury and a lack of funding. They must create awareness within the population as well, to stop the tribal and sectarian methods of revenge on doctors. It is blatantly wrong to seek revenge on doctors in general, but especially so when the situation is not their fault.

Much like Dr. Yassin and Dr. Kurdi, Iraqi doctors practice medicine at risk to their own safety and lives, nevertheless attempting to save the lives of civilians. GICJ condemns this practice of isolating and demonizing doctors for situations beyond their control. We urge the UN to put pressure on the Iraqi government to provide doctors the infrastructure and tools necessary to uphold the human rights of Iraqi citizens. Also, the media must stop spreading propaganda about doctors. The government and other civil service organizations must ensure that civilians realize that the fault is not with the doctors, and therefore to stop channeling their frustration at blameless doctors.