Since 1981, November 25 has been marked as the day to combat violence against women and to raise awareness on a larger scale. This date is based on the date of the brutal assassination in 1960, of the three Mirabal sisters who were political activists in the Dominican Republic, on orders of Dominican ruler Rafael Trujillo (1930-1961). On 20 December 1993 the General Assembly, by resolution 48/104, adopted the Declaration on the Elimination of Violence against Women. The Declaration defines violence against women as:

“any act of gender-based violence that results in, or is likely to result in, physical, sexual or psychological harm or suffering to women, including threats of such acts, coercion or arbitrary deprivation of liberty, whether occurring in public or in private life.”

In this context, in 1999 the United Nations General Assembly designated 25 November as the International Day for the Elimination of Violence against Women and invited governments, international organizations, and NGOs to organize on that day activities designed to raise public awareness of the alarming and serious issue. 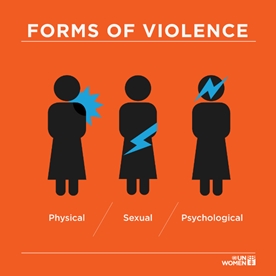 Violence against women and girls is manifested in physical, psychological, and sexual forms that include: 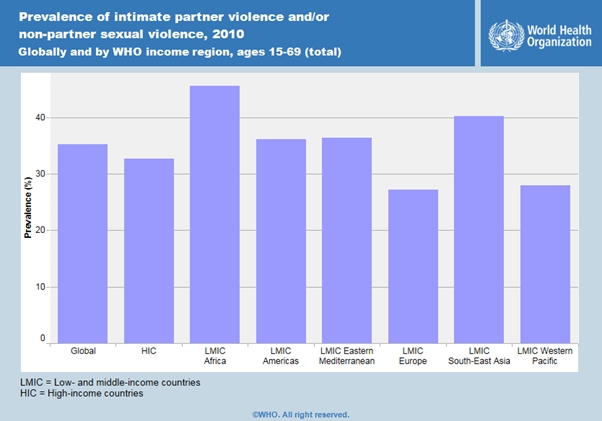 Violence against women affects women at all stages of their life and has adverse effects on, and obstructs progress in many areas including poverty abolition, combating HIV/AIDS, and peace and security and. However, violence against women and girls is not inevitable. Prevention is possible and essential.

Different campaigns have evolved where activists and survivors can have a voice. For example, campaigns such as #MeToo, #TimesUp, #Niunamenos, #NotOneMore, #BalanceTonPorc, and others, have reached a buildup that cannot be quieted anymore. Advocates understand that while the names and backgrounds may differ across geographic locations, women and girls everywhere are suffering extensive abuse and their stories need to be brought to light.

This year’s United Nations theme for the International Day for the Elimination of Violence against Women is “Orange the World: #HearMeToo”. UN Under-Secretary-General and Executive Director of UN Women, Ms. Phumizle Mlambo-Ngcuka said in a statement that this theme aims to “honour and further amplify voices” of victims and survivors of gender-based violence and to bring them together in a global movement of solidarity. It is also a call to listen to and believe the survivors toward ending the culture of silence and put the survivors at the centre of the response. She also said that this theme encourages a change in focus from “questioning the credibility of the victim, to pursuing accountability of the perpetrator”.

#HearMeToo is thus a call to strengthen law enforcement. As mentioned above the vast majority of violations and abuses go un-reported for various reasons such as stigma and reprisals and of the reported cases few results in charges or convictions, which only allows impunity to persist. Authorities, police, and judicial systems must take reporting seriously and must ensure and prioritize the well-being and safety of survivors. Furthermore, the law must recognize sexual harassment as a form of discrimination against women and a human rights violation that perpetuates inequality.

Under the theme Orange the World: #HearMeToo, partners are encouraged to host events with local, national, regional and global women’s movements, survivor advocates and women human rights defenders. Partners are also encouraged to create opportunities for dialogue between activists, policy-makers and the public. The theme and activities of the UNiTE Campaign in 2018 under the global banner Orange the World: #HearMeToo, will aim to mobilise all UNiTE networks, the UN system, government partners, civil society, schools and universities, private sector, sports associations and individuals to stand in solidarity with survivor advocates and women’s human rights defenders who are working to prevent and end violence against women and girls. As in previous years, the color orange will be a crucial theme unifying all activities, with buildings and landmarks lit and decorated in orange to bring global attention to the initiative.

Under this theme many activists will also participate in an international campaign called, “16 Days of Activism Against Gender-Based Violence”. This campaign was originally launched and is coordinated by the Center for Women’s Global Leadership. The campaign takes place every year between 25 November (International Day for the Elimination of Violence against Women) and 10 December (Human Rights Day). It is used by activists around the world to organize strategies that call for the elimination of all forms of gender-based violence. It is run by over 6,000 organisations in 187 countries. The 2018 theme for the ‘16 Days Campaign’ is “End Gender-Based Violence in the World of Work”. 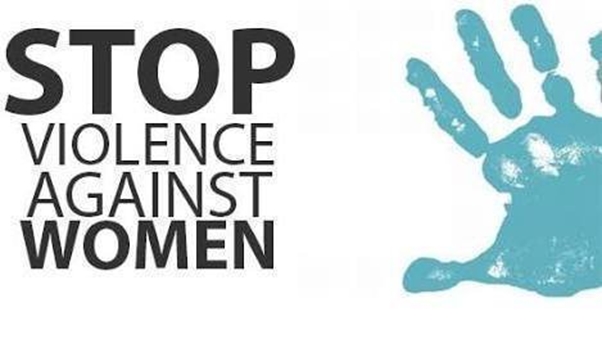 The International Day for the Elimination of Violence against Women and the #MeToo awareness campaign is further reinforced by the awarding of the 2018 Nobel Peace Prize to two outstanding activists and campaigners against rape in warfare, Nadia Murad and Denis Mukwege.

Ms. Murad is a Yazidi human rights activist and a survivor of torture and rape by Islamic State militants who kidnapped her and used her as a sex slave for three months. In captivity in Mosul, Iraq she was marketed in sexual slavery at which point she was sold and bought numerous times where she was subjected to sexual violence and physical abuse.  She escaped after three months and shortly after began speaking about human trafficking and sexual violence. She spoke before the UN Security Council and later gave testimonies that drew attention to sexual violence as a weapon of war that is not unique to Islamic State militants.

Ms. Murad would later become the face of a campaign to free the Yazidi people who were targeted by the Islamic State. She amplified her voice as a victim and survivor of gender-based violence in her memoir, The Last Girl: My Story of Captivity, and My Fight Against the Islamic State. In 2016 she was appointed the United Nations Goodwill Ambassador for the Dignity of Survivors of Human Trafficking. She also founded Nadia’s Initiative (NI), and organization that advocates for victims of sexual violence and works to rebuild communities in crisis.

Dr. Mukwege is a Congolese gynecologist who founded Panzi Hospital in Bukavu, eastern Democratic Republic of Congo where he served as director and chief surgeon. He specializes in the treatment of women who have been raped by armed forces and has treated tens of thousands of victims.

After founding Panzi Hospital in 1999 its main purpose was to provide maternity care. However, as a result of conflict in the region his hospital began receiving large numbers of sexual-assault victims some of whom were as young as three years old. They carried extreme physical injuries, mutilations, and trauma.

Sexual violence including systemic rape and gang rape against women and girls is used as a war tactic to terrorize and displace civilians in the devastating conflict situation in the region. This brutal and inhumane tactic is being perpetrated by armed rebels, government soldiers, and other militants and armed-groups. In response, Dr. Mukwege created a staff dedicated to specialize in the care of such victims and since 1999, along with others have treated over 50,000 women and children.

During conflict women and girls are some of the most vulnerable victims as they suffer various and tremendous forms of violence as consequences of wars and armed-conflict. In these situations, the number of women that go through sexual abuse significantly increases. Women also suffer in multiple aspects; the poverty rate is higher; they suffer in the loss of jobs and destruction of assets such as homes and other essential needs; food supplies are disrupted, health services are not available or inaccessible; death rates are higher; and the maternal mortality rate during armed conflicts is 2.5 percent higher on average in conflicts and post-conflict countries. Additionally, they are often forced to flee the country where in some cases they encounter other forms of discrimination and abuses leaving their situation in peril.

International Humanitarian Law (IHL) and other bodies such as international human rights law, refugee law, and domestic law recognizes the particular vulnerabilities of women in conflict situations and the systematic disadvantages stemming from gender inequality. In light of this special provisions under these international and national instruments are put in place to ensure protection for women against violence in conflict situations. However, despite special protection measures many argue that more should be done.

Sexual violence sadly remains a widespread occurrence and is used as a weapon of warfare in armed-conflict situations. However, the voice and activism of Nadia Murad and Denis Mukwege, respectively, are testament to the 2018 theme of the International Day for the Elimination of Violence against women and the international campaigns such as the 16 Days of Activism toward ending violence against women.

Prevention is possible and different strategies must be used. Multiple interventions at the same time might have a long-lasting and permanent effect to prevent violence against women. When it comes to prevention all sectors and actors must be involved and engaged in helping to resolve the issue.  Every actor has a role to play and may improve on preventing the problem. Empowerment of women and girls is necessary, and more support should be provided for the survivors. Those who are oppressed and have gone through violence should be able to rebuild their lives and stop abuse from taking place. An important role nowadays is having survivors who are speaking out which is also an inspiration for those who are going through violence. Last but not least the transformation of the culture by enforcing laws that protect women’s rights and changing the attitudes that disregard violence against women.

Geneva International Centre for Justice (GICJ) calls for states and UN agencies to improve measures and mechanisms to further respect, protect, and fulfil women’s rights in accordance with international laws and norms. GICJ is especially concerned with violence against women and girls in conflict situations as they are often victims of targeted assaults, abuses, and grave violations based on gender. GICJ believes that more work is needed by the International Community to address this women and girls in these particular situations.

To this end, GICJ calls on the International Community to enhance special protective measures for women and girls in conflict situations. Awareness raising and advocacy campaigns that empower women and give them a voice must be widespread and the work by women human rights defenders and local women peace-keepers should be acknowledged. Lastly, increased funding to relevant stakeholders and human rights training is crucial for the elimination of violence against women.