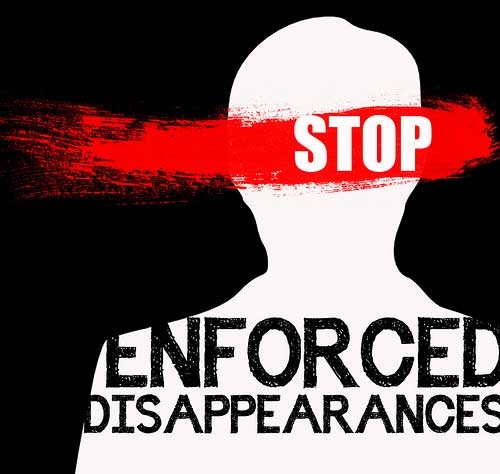 Enforced disappearances are often part of a strategy to bring about terror. The feeling of insecurity resulting from this practice affects not only the relatives of the missing person but also their community and society as a whole.

To mark the international day for victims of enforced disappearances, UN experts said, “Relatives have a right, as victims themselves, to know the truth about the circumstances of any enforced disappearance, the whereabouts of their loved ones, the progress and results of the investigation, and ultimately the fate of the disappeared person,”

While widespread in military dictatorships, enforced disappearances are today perpetrated in complex situations of internal conflict, particularly as a means of repressing political opponents. Some facts are particularly worrying: continued harassment of human rights defenders, relatives of victims, witnesses and lawyers in relation to cases of enforced disappearance; States' use of the fight against terrorism as an excuse to violate their obligations; and impunity, which is still widespread for alleged perpetrators of these enforced disappearances. Special attention must also be given to the specific groups of people and particularly vulnerable groups that are children and persons with disabilities. 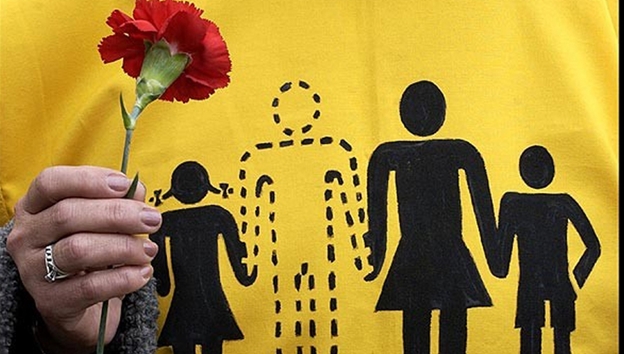 General Assembly seizes this issue and proclaims an International Day

On 21 December 2010, the General Assembly, in its resolution 65/209, expressed its deep concern at the increasing number of enforced or involuntary disappearances in various parts of the world, including arrests, detentions and abductions when such acts occurred. belong to enforced disappearances or can be assimilated to it. It also highlights the growing number of reports of cases of harassment, ill-treatment and intimidation of disappeared witnesses or families of missing persons.

In the same resolution, the Assembly decided to proclaim 30 August the International Day of the Victims of Enforced Disappearance. This day is celebrated since 2011.

In that same resolution, the General Assembly also welcomes the adoption of the International Convention for the Protection of All Persons from Enforced Disappearance.

In 2003, the Commission on Human Rights established an open-ended intersessional group to develop a draft legally binding normative instrument for the protection of all persons from enforced disappearances. During the three years of negotiations, more than 70 States and numerous NGOs and family associations of the disappeared, as well as several experts participated in the meetings of the working group. The UN Human Rights Council adopted this International Convention at its first session in June 2006. The General Assembly then adopted it in December of the same year.

"persons are arrested, detained or abducted against their will or otherwise deprived of their liberty by officials of different branches or levels of Government, or by organized groups or private individuals acting on behalf of, or with the support, direct or indirect, consent or acquiescence of the Government, followed by a refusal to disclose the fate or whereabouts of the persons concerned or a refusal to acknowledge the deprivation of their liberty, which places such persons outside the protection of the law."

A disappearance has a doubly crippling effect: for victims who are often tortured and whose lives are constantly threatened, and for family members who, unaware of the fate of their loved ones, pass from hope to despair, expectation and waiting, sometimes for years, new ones that they may never receive. The victims know that their family does not know what has happened to them and that the chances of being rescued by anyone are slim. Having been removed from the protection of the law and "disappeared" from society, they are in fact deprived of all their rights and at the mercy of their captors. Even in cases where death is not the final outcome and the victim ultimately escapes this nightmare, the physical and psychological trauma resulting from this form of dehumanization as well as the brutality and torture that accompany it all too often leave lasting traces. 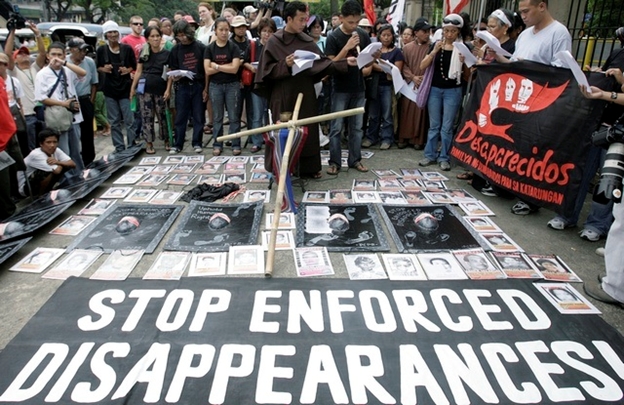 Friends and families of the victims

Family and friends of missing persons are also plagued by anxiety, unaware of whether their loved one is still alive and, if so, where the victim is detained, under what conditions, and in what state of health. Knowing that they too are threatened and exposed to the same fate, it can be even more dangerous to seek the truth.

The distress of the family is often aggravated by the material difficulties involved in the disappearance of a loved one. The missing person is often the main bread earner of the family. She may also be the only family member able to farm the land or run the family business. The affective test is thus exacerbated by the material prejudice, felt even harder in the case where the family decides to undertake research, with the expenses that implies. Moreover, not knowing if the loved one will come back one day, it is difficult for families to adapt to this new situation. In some cases, the country's legislation does not allow you to receive a pension or other benefits without presenting a death certificate. The family is thus often marginalized economically and socially.

Women are the hardest hit by the severe economic hardship that is usually associated with death, and it is often women who take the lead in the fight to find out the truth about missing family members. In doing so, they expose themselves to intimidation, persecution and retaliation. And when the missing person is a woman, she is particularly vulnerable to sexual violence and other forms of violence.

Children too can be victims of enforced disappearance, both directly and indirectly. The disappearance of a child is a flagrant violation of several provisions of the Convention on the Rights of the Child, including the right to an identity. The loss of one of the missing parents is also a serious violation of the child's fundamental rights.

Communities are directly affected by the disappearance of family supports, and the deterioration of the economic situation of families and their social marginalization.

Enforced disappearances have often been used as a strategy to reign terror in society. The feeling of insecurity resulting from this practice affects not only the loved ones of the missing person but also their community as well as the whole of society.

A serious violation of human rights

Deprived of the protective force of the law and "disappeared" from society, the victims of enforced disappearances are in fact deprived of all their rights and at the mercy of their captors.

Here are some of the human rights that enforced disappearances regularly violate:

•    The right to recognition as a person before the law;

•    The right to liberty and security of the person;

•    The right not to be subjected to torture and other cruel, inhuman or degrading treatment;

•    The right to life, when the missing person is killed;

•    The right to a fair trial and to judicial guarantees

•    The right to an effective remedy, including reparation and compensation;

•    The right to know the truth about the circumstances of a disappearance.

In addition, enforced disappearances generally violate various economic, social and cultural rights for both victims and their families:

•    The right to protection and assistance of the family;

•    The right to an adequate standard of living; 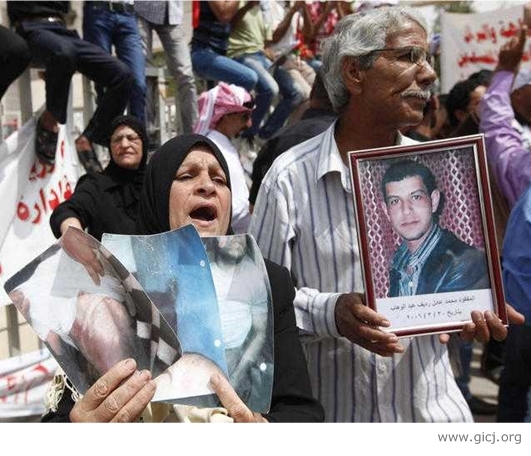 Families of victims of enforced disappearances in Iraq take to the streets in protest.

The issue of enforced disappearance presents an ongoing challenge in Iraq. Although the government insists that this is a problem of the past, both government forces and affiliated militias continue to carry out campaigns of abduction and arbitrary arrest across the country. Due to the continuing degradation of the security situation in Iraq, and governmental denial of the current state of recent enforced disappearance cases, there is no comprehensive statistic detailing the number of missing persons in Iraq. However, GICJ estimates the number to be between 250,000 and over one million.

In June 2016, while Iraqi military forces and the US-led armed coalition fought ISIL to “liberate” the city of Fallujah countless atrocities took place many of which were the direct and indirect results of the bombings and shelling committed by the “liberation” forces. As civilians attempted to escape the destructive effects of the fighting they became subject to abductions where they would face various grave human rights abuses and atrocities and even death due to their vulnerability against nefarious forces. For instance, 600 men and boys were met by “a militia group involved in the recapture of Fallujah from ISIL” to unknown locations. Approximately 8,000 civilians escaping their village in Saqlawiyah were coaxed towards safety by what appeared to be governmental forces. Instead, they were met by militia fighters who separated approximately 1,500 men and boys from the women and girls and forcibly transferred them to a Government-run camp. Immediately they were put in appalling conditions as they were cramped into small rooms and spaces with little air and were denied food and water. If they complained they were severely beaten and some were even shot – moreover, witnesses recount that during this period of captivity many had died from indiscriminate killings and other forms of abuses and torture.

On the 2nd of June, 2016, GICJ has received documented information of over 300 abducted persons from the village of al-Azrakiya where about 150 were killed on the spot, including the execution of an entire 35 member family; the rest have simply disappeared. In the following month, July 2016, Ján Kubiš, Special Representative of the UN Secretary-General and Head of the UN Assistance Mission for Iraq, acknowledged the disappearances of over 700 Iraqi men and boys who went missing after the Fallujah military operations of May 2016.  He also added that the disappearances were committed by elements of the Popular Mobilization Forces and the Iraqi Security Forces.

The High Commissioner for Human Rights, Zeid Ra’ad Al-Hussein, also acknowledged the disappearances of men and boys in the month of June and strongly supported an investigation committee and measures taken to locate the whereabouts of these missing persons.

Geneva International Centre for Justice (GICJ) recommends the Iraqi government to investigate and reveal information about their whereabouts and to all states:

•    Take all necessary measures to put in place mechanisms to combat enforced disappearances;

•    Put in place systems to investigate incidents of enforced disappearances and the whereabouts of missing persons;

Geneva International Centre for Justice (GICJ) pays tribute to all the victims subject to enforced disappearances and shares condolences with the families who have lost their loved ones and are unaware of their whereabouts. Such atrocities in many cases are the horrendous effects of armed-conflict, terrorism, and the like and are a serious violation of human rights and international laws and norms.