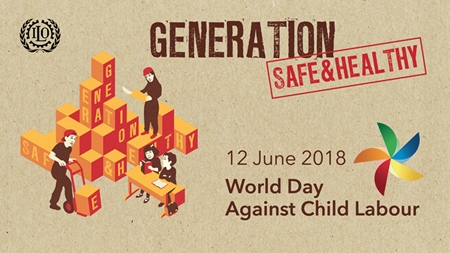 12 June marks the World Day Against Child Labour, which is a date “(…) to focus attention on the global extent of child labour and the action and efforts needed to eliminate it”.1 The celebration of this day started in 2002, and it was launched by the International Labour Organization (ILO).2

Last year, in 2017, this day was dedicated to draw attention on the effect that armed conflicts and disasters can have on child labour.3 In a statement released for this occasion, Mister Guy Ryder, the ILO Director-General, highlighted that children living in areas touched by these two types of events are at particular risk of being engaged in child labour. In some cases, minors can be recruited to combat in armed conflict. Another category of children that is particularly vulnerable to be victims of child labour or trafficking are refugees and migrants.4

This year, the theme of this day is “Generation Safe & Healthy” and it is going to be celebrated through a joint campaign with the World Day for Safety and Health at Work, which will be concentrated on the necessity to halt child labour and to enhance the safety and health conditions of youth workers.5 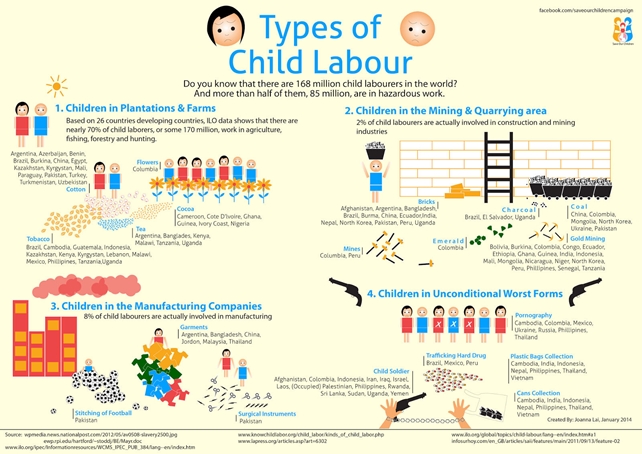 The other two significant instruments in this regard are the Minimum Age Convention (N.138) and the Worst Forms of Child Labour Convention (N. 182). The first one was adopted in 1973 and it defines “the general minimum age for admission to employment or work at 15 years (13 for light work) and the minimum age for hazardous work at 18 (16 under certain strict conditions)”.8 The Worst Forms of Child Labour Convention was adopted in 1999 and it requires states which have ratified the convention to eradicate the worst forms of this practice, such as the sale and the forced recruitment of children. Furthermore, the text equally demands ratifying states to offer “(…) the necessary and appropriate direct assistance for the removal of children from the worst forms of child labour and for their rehabilitation and social integration”.9

Combatting child labour is also one of the objectives of the Sustainable Development Goals of 2015. In fact, one of the targets of the eighth goals is to “take immediate and effective measures to eradicate forced labour, end modern slavery and human trafficking and secure the prohibition and elimination of the worst forms of child labour, including recruitment and use of child soldiers, and by 2025 end child labour in all its forms”.10

Not all working minors should be automatically defined as victims of child labour.11 In fact, they can be engaged in works that do not have a negative impact on their wellbeing, their development or meddle with their education. The expression “child labour” is referred to an activity that “is mentally, physically, socially or morally dangerous and harmful to children; and interferes with their schooling by: depriving them of the opportunity to attend school; obliging them to leave school prematurely; or requiring them to attempt to combine school attendance with excessively long and heavy work”.12

According to the ILO, in 2016, 152 million minors were victims of child labour, and 73 million of them were employed in hazardous works. Boys represented more than girls: they were 88 million against the 64 million of girls. The region with the highest percentage of child labour was Africa (19.6%), followed by Asia and the Pacific (7.4%) and the Americas (5.3%). A positive aspect to highlight is the fact that between 2012 and 2016 the number of children victims of child labour decreased. However, this reduction has slowed in comparison with the progress that took place during the previous 4 years (2008-1012). Furthermore, what has been noticed is that there is a link between child labour and the regions where conflicts and disasters take place. Indeed, in countries characterized by conflicts the occurrence of this practice is 77 % higher than the world average.13 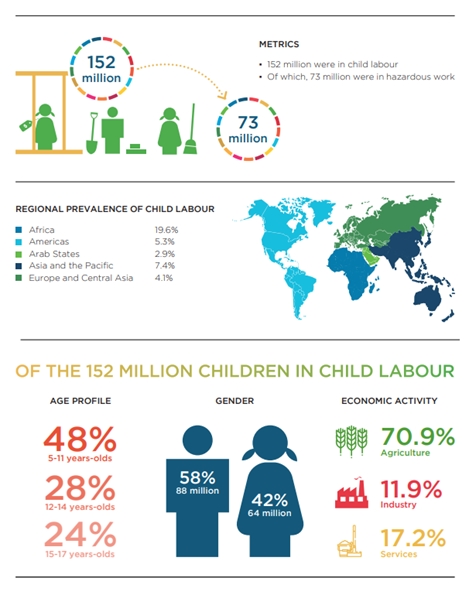 Geneva International Centre for Justice (GICJ) calls for the universal ratification and application of the ‘Worst Forms of Child Labour Convention’ (1999) and encourages all states to promote and take practical steps to ensure quality education for children.

GICJ strongly condemns all forms of child labour and, in the light of the still high number of children victims of this violation, it urges all states to take more measures with the aim of reducing child labour worldwide and to implement the different international treaties created for this purpose. In fact, more efforts should be taken in order to achieve the 8.7 target of the Sustainable Development Goals, which aims to end all forms of child labour by 2025.

Furthermore, special attention should be paid to prevent and halt child labour in armed conflict, disaster contexts, and hazardous environments given their particularly vulnerability in these situations.

11. ILO - What is child labour, http://www.ilo.org/ipec/facts/lang--en/index.htm