The International Day for Innocent Children Victims of Aggression was proclaimed by the General Assembly on 19 August 1982, at its emergency special session on the question of Palestine. June 4 has been designated as the day on which the consequences of war on children is commemorated.

In situations of armed conflict the most vulnerable members of society suffer the gravest consequences. Children are undoubtedly the most innocent victims in such occasions. The purpose of the day is to acknowledge the pain suffered by children throughout the world who are the victims of physical, mental and emotional abuse.

The Convention on the Rights of the Children constitutes the core instrument for the protection of children. The Convention is the most rapidly and widely ratified international human rights treaty in history. Only one State in the world –the United States of America- has not ratified it yet. Although this proves the great momentum the Convention has created regarding the protection of the rights of children, crimes against them are frequently committed. Recruitment and use of children in war, killing, sexual violence, abduction, attacks on schools and hospitals, and denial of humanitarian access are the six most common violations against children in armed conflict.

Notably, the motive behind the adoption of Resolution A/RES/ES-7/8 by the General Assembly was the emergency situation in Palestine. Sadly, 36 years after, the atrocities continue occurring in the long-suffering Palestinian territory. According to the Palestinian Ministry of Health since the beginning of the Great Return March on Palestinian Land Day, on March 30, 2018, 14 children have been killed by Israeli army fire.i Furthermore, Israel arrests, detains and prosecutes 500-700 Palestinian children in military courts every year and is the only country in the world that automatically prosecutes children in military courts.ii

Geneva International Centre for Justice (GICJ) condemns all acts of violence by Israeli forces on Palestinian children and calls for an end to the occupation of Palestinian Territories, that has continued since 1967. 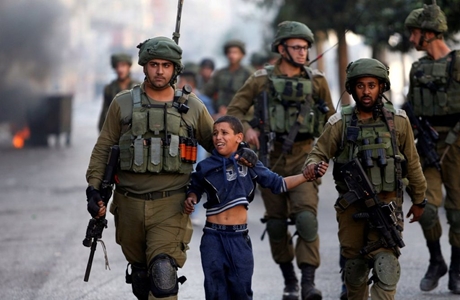 Although Palestine constitutes the most unfortunate example of how grave crimes against children may go on for decades there are other situations in the world where gross violations of international law against children are taking place. In Iraq, the Popular Mobilization Forces (PMF) is a party recognized by the UN Security Council that commits grave violations against children in situations of armed conflict, and furthermore, recruit children for armed combat among other Iraqi armed forces. Similarly, in South Sudan children are recruited and forced to take up arms forcing them to be directly involved in serious violence instead of enjoying their fundamental rights such as the right to education.

As reported by the UN High Commissioner for Human Rights, Mr. Zeid Ra’ad Al Hussein, Rohingya children are indiscriminately killed in Myanmar as the long-standing crisis against the Rohingya people persist. Girls are systematically gang-raped in front of relatives, which is a most cruel method of torture and sexual violence in many of the on-going conflicts.

Almost every region of the world affected by armed conflict including Afghanistan, Central African Republic, Sri Lanka, Syria, and Yemen among others have innocent children as the main victims of aggression.

GICJ condemns in the strongest terms the use of and aggression against children in armed conflict and once again calls on the international community to uphold the commitments and guidelines in the Convention on the Rights of the Child and to acknowledge children across the world who are victims of physical, psychological, and emotional pain and suffering.

In the words of Mahatma Gandhi: “If we are to teach real peace in this world, and if we are to carry on a real war against war, we shall have to begin with the children”.