On 17 December 2007, the General Assembly declared March 25 International Day of Remembrance of the Victims of Slavery and the Transatlantic Slave Trade through adopting resolution 62/122. The resolution called for the establishment of an outreach programme to spread information about the ‘causes, consequences and lessons of the transatlantic slave trade, and to communicate the dangers of racism and prejudice’.

The map of trade route transported between 10 and 12 million enslaved Africans to the Americas between 1501 and 1830. More than 18 million people were enslaved during this period. The transatlantic route, which crossed the Atlantic Ocean, was the second leg of the three-stage route known now as the triangular trade-route. The first leg was the journey from Europe to the Western-African shore. Europeans, mainly the Dutch, Spanish and Portuguese, carried manufactured goods such as cloth and weapons with them, which would be traded with African dealers for kidnapped people. The European weaponry would be used to kidnap more people, to be sold as slaves. 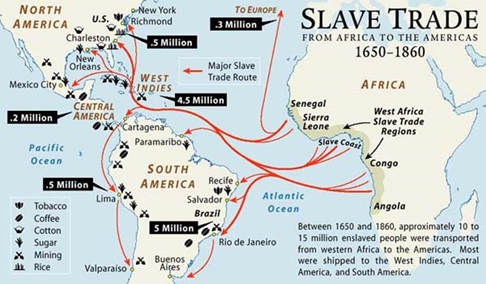 The second leg of the journey, the Atlantic passage, was notorious for its brutality. During the 8000km-journey across the Atlantic Ocean from the Western shore Africa to the Americas, the enslaved were typically chained together, unable to stand up, and tightly packed into the tiers below the decks. The conditions below deck were deplorable with intolerable heat, extremely poor hygiene and low oxygen levels. Between 15 to 25 percent of the enslaved people aboard died while on the ships.

The last part of the triangular trade was the return from the Americas to the European continent. Having sold the enslaved in the Americas, the traders returned with raw materials that were rare in Europe. Delicacies such as sugar, spices and cotton were brought back across the Atlantic. These raw materials were profitable in Europe, as it was impossible to harvest most of these products there. 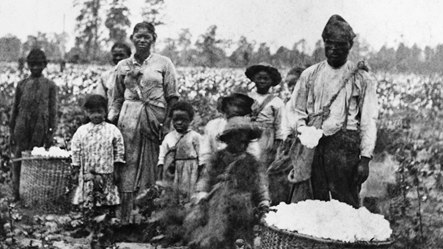 Unfortunately, slavery and racism are not a thing of the past. Human trafficking and forced labour are still a reality for 40.3 million people are the world. The International Day of Remembrance of the Victims of Slavery and the Transatlantic Slave Trade not only commemorates the victims of the Transatlantic slave trade, but also aims to spread awareness of the consequences of slave trade, and specifically addresses topics such as racism, racial discrimination, xenophobia and other forms of intolerance.

The Office of the United Nations High Commissioner for Human Rights (OHCHR) published the report ‘Abolishing Slavery and its Contemporary Forms’ in 2002, which focused on current slavery. It concludes that even though slavery is often seen as something of the past, it is still prevalent in several forms today. In the report, the OHCHR elaborates on forced labour, debt bondage, migrant workers, human trafficking, prostitution, forced marriage, the sale of wives, child labour, child servitude and organ-harvesting.

A person is considered enslaved when they are:

-    Forced to work through coercion, mental threat or physical threat,

-    Owned and/or controlled by an employer who uses mental and/or physical abuse or the threat thereof,

-    Dehumanised by being considered a commodity and a property,

-    Restricted in their freedom of movement, physically or otherwise.

Modern slavery can be divided into six categories:

Forced labour is currently the most common form of modern slavery. An individual is considered a victim to forced labour when they are forced to work against their will and/or under threat of punishment. This most commonly occurs in the agriculture sector, domestic work, manufacturing and construction.

Debt bondage happens when a person is forced to work in order to pay off a debt. They often have little or no control over their debt.

Human trafficking entails the recruitment, harbouring and/or transporting of people by the use of violence, deception, coercion or force. Trafficked people will often be forced into a situation of exploitation, such as forced prostitution, forced labour, forced begging, forced criminality, domestic servitude, forced marriage and forced organ removal.1

Child slavery is not to the confused with child labour. Child labour hinders one’s education and development, whereas child slavery is the exploitation of a minor in order for someone else to gain something.

Child marriage can be considered as slavery when the child has not giving informed consent to enter into the marriage, the child is subjected to a sense of ‘ownership’ by the partner, the child cannot leave or end the marriage.

In the past, GICJ has submitted written statements about the topic to the Human Rights Council of the UN, published reports and addressed the issue in other way, yet the situation seems to be unchanged.2 To bring modern day slavery to an end, a multi-faceted solution is needed: the problem should be tackled economically, socially, culturally and legally. Especially on the International Day of Remembrance of the Victims of Slavery and the Transatlantic Slave Trade it is important to learn from the past. As the problem of modern slavery exceeds national borders, GICJ encourages the international community to strengthen its cooperation in order to fully ban all forms of the practice and calls for stronger social protection for vulnerable individuals. GICJ encourages the Durban Declaration and Programme of Action (DDPA), and urges all states to comply with the agreements of the declaration. Furthermore, GICJ underlines the importance of the cooperation of all levels of government: international, national and regional.

1. ‘What is human trafficking?,’ https://www.antislavery.org/slavery-today/human-trafficking/.