On 18 February 1998, the United Nations (UN) General Assembly adopted resolution 52/149 that proclaimed June 26 as the United Nations International Day in Support of Victims of Torture, “with a view to the total eradication of torture and the effective functioning of the Convention against Torture and Other Cruel, Inhuman or Degrading Treatment or Punishment,2 which entered into force on 26 June 1987.”

The Convention Against Torture (CAT) defines torture as:

“any act by which severe pain or suffering, whether physical or mental, is intentionally inflicted on a person for such purposes as obtaining from him or a third person information or a confession, punishing him for an act he or a third person has committed or is suspected of having committed, or intimidating or coercing him or a third person, or for any reason based on discrimination of any kind, when such pain or suffering is inflicted by or at the instigation of or with the consent or acquiescence of a public official or other person acting in an official capacity. It does not include pain or suffering arising only from, inherent in or incidental to lawful sanctions.”

The Geneva International Centre for Justice (GICJ) has continuously brought forth the serious crime of torture to major international bodies such as the UN Human Rights Council (UNHRC) and to the Office of the High Commissioner for Human Rights (OHCHR) in forms of written and oral statements, and appeals respectively.

Government and pro-governmental use of torture

GICJ is particularly concerned when torture is directed or supported by a government as in almost all cases they are obliged to abide by international conventions, rule of law, and human rights. When torture and ill-treatment is committed by governments they often get away with impunity and victims are left without reparations. GICJ has documented numerous cases of torture by pro-government militia forces from on the ground sources and by way of witness testimony.

This video shows members of the Popular Mobilization (Alhashd al-shaabi) torturing detained Iraqis. It represents only a glimpse of the real picture on the ground in Iraq, where torture, ill treatment and other forms of inhumane treatment are inflicted on a widespread and systematic basis by the authorities and their affiliated militias.

In Syria and Iraq, for example, torture has run rampant since the outset of the conflict and 2003 invasion, respectively. Countless cases of ill-treatment and alleged torture have been documented globally, particularly in detention facilities. Furthermore, on the ground actors, including governmental forces have been “accused of perpetrating torture on civilians, military personnel and detainees.” Methods of torture and ill-treatment include: 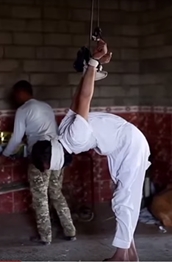 Severe beating (with and without objects such as cables, sticks, pipes, whips etc.)
•    Beating on the sole of the feet with sticks, whips or cables
•    Hanging the victims from the ceiling by the wrists
•    Electrocution
•    Hanging upside-down
•    Pulling out of teeth or fingernails
•    Immobilising the victim by tying him/her to a flat board (which sometimes is folded in half) or forcing him/her into a car tire
•    Pharmacological torture
•    Holding of stress positions for hours/days on end
•    Exposure to cold/heat
•    Solitary confinement 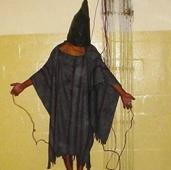 •    Sensory or sleep deprivation
•    Verbal threats, even against members of the family
•    Waterboarding
•    Burning
•    Use of acid
•    Sexual violence (rape, penetration with objects, prolonged forced nudity, groping, beating and electrocution of genitalia)

During interrogations, various forms of physical and psychological torture range from mild to severe and conditions within detention centres are not only poor but in some cases, can degrade the detainee. The cells can be in filthy conditions leading to very unhygienic conditions and prisoners are denied adequate portions of food and water. Some cells constitute only 70 metres squared in size and can be used as solitary confinement or can be completely crowded such that prisoners can only stand. Should a detainee attempt to complain they are immediately beaten, tortured, or killed and none are exempt; women, children, and the elderly are all subjected to forms of torture and ill-treatment. Detainees die from these abuses or even while being physically tortured and many fail to recover from the endured physical and psychological trauma.

The US has been guilty of using methods of torture for various reasons but has enjoyed impunity, and furthermore, has kept silent despite the release of credible evidence in the form of images (Iraq: New Torture Images Out). What is worrying is that newly elected President Trump of the US has mentioned and supports the re-instatement of the use of torture as he claimed it works as a method of gathering intelligence.

Prevailing excuses for using or wanting to use torture comes under the guise of “fighting terrorism” and that it is a method of gathering intelligence, to which, perpetrators have gone so far as to re-name this particular use of torture as “enhanced interrogation techniques”. Guantánamo Bay detention camp for instance administers various forms of tortures to detainees many of whom are innocent or are merely suspected of alleged collusion or ties with terrorist groups or organisations. Moreover, numerous studies and testaments (from victims and administers of torture) ascertain that torture either does not work in terms of gathering information or is susceptible to false or inaccurate information.

In the case of Israel, despite its ratification of CAT, the practice of torture of Palestinian prisoners and detainees, including women and children persists. Methods of torture include painful shackling, fixation in stress positions, sleep deprivation, threats against family members, and physical and verbal abuse. Recent years saw a rise in forms of psychological torture, including insults, defamation, sexual harassment, and verbal assaults to religion, values or culture. As the methods are employed in combination during prolonged interrogation periods, they have a cumulative effect. These methods are aimed at breaking the detainees’ spirit and permanently harm the victims, violating fundamental provisions of international law prohibiting torture.

Perpetrators of such crimes – who pledge allegiance to the Israeli Prison Services and to the State of Israel and whose illegal acts are endorsed on the basis of alleged public security considerations – are endowed with impunity. In the meantime, the victims of torture – even if released from the physical prison cells – remain mentally imprisoned and psychologically and physically scarred. No compensation is offered to victims who continue to face military or intelligence infiltration into their private and public lives by the Israeli State.

Redress and Healing of victims

2. Nothing in this article shall affect any right of the victim or other persons to compensation which may exist under national law.

The use and practice of torture is widespread as are the various techniques. However, more needs to be done in terms of healing, compensation, and reparations for the survivors and victims of torture. Novel and unconventional techniques, particularly non-drug based psychological solutions deserve more attention, research, support, and funding. Providing support may also come in the form of listening to the survivor’s experience without judgement and providing them with a home or safe and comfortable environment that ensures companionship and safety.

GICJ acknowledges and calls on everyone to realise the psychological extent of torture that sometimes goes under the radar especially post-traumatic episodes. In this regard, GICJ calls on all governments to utilise all available measures to immediately halt all acts of torture and take steps to ensure the prevention of torture and ill-treatment in detention and interrogation centres. Furthermore, GICJ also urges all governments and the international community to recognize victims and survivors of torture who never cease to pursue reparations to this day for their suffering that may have occurred many years ago.

In Kenya for instance, Mau Mau survivors continue to pursue the court case against the British government who supported and allegedly committed grave physical and psychological torture on men and women of the Mau Mau resistance fighters during the Mau Mau Rebellion against the British rule in Kenya (1952 – 1960). Many of the victims had their teeth removed one by one, beaten until unconscious, and even had their genitals severed. In attempts of cover-up the British government destroyed hidden records but some remain and are being used to demonstrate the crimes committed and thus the necessary warrant for redress and rehabilitation for the victims and survivors of torture during the Resistance. 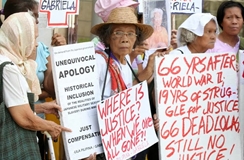 ‘Comfort Women’ victims still await an official state apology from the governments of Japan and South Korea and continue to call for the revision of the “comfort women” accord in order to ensure adequate redress and reparations are given to the victims of sex slavery and other forms of torture. All survivors and victims’ of torture around the globe need the support of the international community to ensure not only redress but also justice, healing, and a voice.

The international community needs to put in place more efforts to better support the survivors and victims of torture by way of funding and capacity building. Academic and medical institutions as well as research facilities and communal centres are necessary to better enhance the healing of survivors and victims of torture. To this end, GICJ urges that redress and rehabilitation has to take place and must be centred around a victim-oriented approach. Under General Comment no. 3 (2012) of the CAT focus is given to the victim and notes that States parties obligations to provide redress under Article 14 are “two-fold: procedural and substantive”.

Iraq: The Truth Behind War on Terror - https://www.gicj.org/un-special-procedures-appeals/iraq/1091-truth-behind-war-on-terror

UN Special Rapporteur on Torture and other cruel, inhuman or degrading treatment or punishment - https://www.gicj.org/un-special-procedures-appeals/information-on-the-un-special-procedures/176-united-nations-special-rapporteur-on-torture-and-other-cruel-inhuman-or-degrading-treatment-or-punishment