In Halaweh, a Palestinian village in the South Hebron Hills, in which the Israeli army had conducted a demolition four days earlier on 2 February, a few Palestinian residents welcomed us in front of the ruins that used to be their homes. The village with its stone buildings had been leveled to the ground and the dust still lingered in the air. We walked around in silence, cautiously watching every step as our feet moved across living rooms, kitchens and bedrooms, now shattered and solely divided by a few crumbled bricks. Under the wreckage, child’s shoes, feeding bottles, a cattle, and books appeared. A little boy was playing in the rubble of his house. 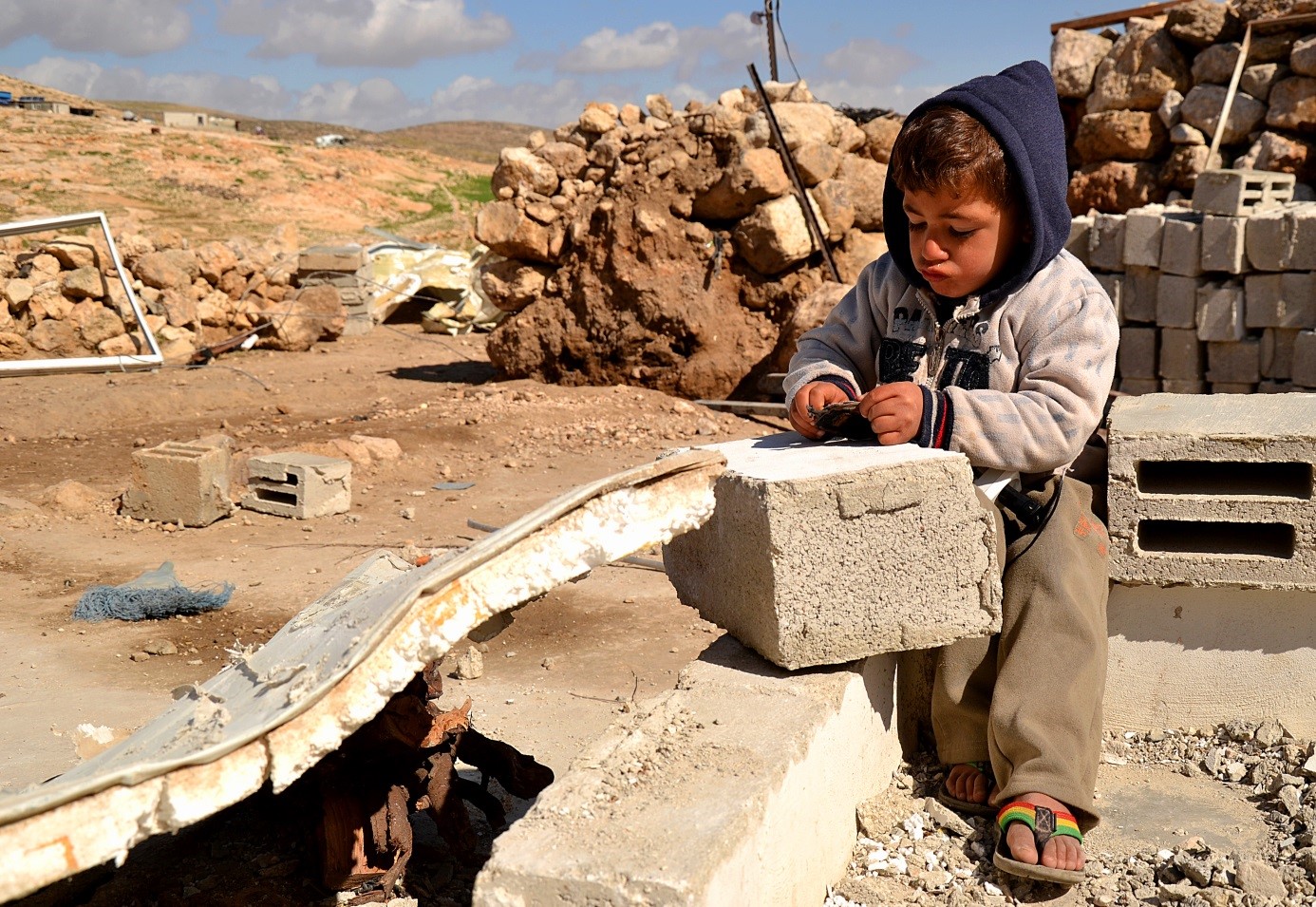 A little boy playing in the rubble of his demolished house in the South Hebronite village of Halaweh, Palestine.  6 February 2016. [Photo by Misha Pook]

Soon, in an effort to clean the village and eventually rebuild, we started collecting the few bricks that had remained whole from the ruins and piled them up at the former entrance area. Layers of dust filled the air and once in a while, thick dust clouds rose in the wind. We rubbed our eyes with dusty hands and blinked. Picking up fragmented bricks, shoveling the wreckage of a demolished home into small buckets left a feeling of powerlessness and exhaustion in the face of a system that seemed to loom over our heads. The Israeli occupying system works in systematic yet arbitrary ways, committing violations of human rights and international law, including collective punishment, against the Palestinian civilian population in contravention to Israel’s obligations as belligerent occupying power.

the following weeks, Israel continued its home demolitions in the West Bank and East Jerusalem unabated. On 6 April 2016, the Israeli army targeted the family and Bedouin community of Tariq Hathaleen, a young activist and friend of a GICJ member. In his village, Um Al-Khair, the Israeli military demolished six family homes, leaving 35 Palestinians homeless. The soldiers entered the village in the early morning, demanding that the families leave their houses. After the evacuation, bulldozers destroyed the structures. This was the eighth time the military conducted home demolitions in Um Al-Khair since the nearby “Karmel” settlement was illegally established in 1981, under the pretext that the locals do not have building permits. For Palestinians living in Area C, which constitutes 60 percent of the West Bank under complete Israeli military control, it is almost impossible to be granted building permits by the Israeli authorities. Therefore, residents have to build without officially issued permits. The policy of house demolitions reveals that the Israeli state seeks to expel Palestinians from their lands to illegally construct and expand settlements and annex further parts of Palestine. The illegal settlement of “Karmel” is located closely to the Palestinian village and is provided with infrastructure, electricity and water systems by the Israeli state, while the Palestinian inhabitants are deprived thereof.

Tariq explained to GICJ that his family had already become refugees when they were displaced from their land in Arad as a result of Israeli actions in 1948. Now, the Israeli occupying forces are trying to displace them again. After they had been expelled from their land in 1948, his grandfather was forced to buy the land in Um Al-Khair, which cost him 100 camels. For a while, the family could continue their lives, shepherding and working on the land. In 1981, however, the settlers of “Karmel” arrived and illegally established a new settlement on the family’s land, continuously expanding it. By now, they have confiscated half of the land, have destroyed water wells and cisterns and other vital infrastructure, and have closed roads of passage by Palestinian residents traditionally used for agricultural activity. Tariq explained that before the arrival of the settlers, the villagers went shepherding from early morning hours until the afternoon. Now, as a result of roadblocks, bypass roads for settlers, the separation Wall, and the closing of whole areas, Palestinians face grave obstacles in pursuing their traditional agricultural and nomad activities and earning their livelihood, such as feeding their sheep. Due to Israel’s discriminatory planning system, Palestinians can only build on a narrowly defined and rarely indicated area of their land. If they build outside the area, the Israeli forces “will come and demolish without any warning, without any mercy”, as Tariq underlined. Often, fences and checkpoints are being erected to “protect” the settlements. One day, a donkey crossed the settlement fence and a member of Tariq’s family tried to take the donkey back to the village with her. Tariq explained: “One of the settlers went out of his house and started shooting the old lady and she escaped and fell on the ground.” Setter violence is carried out with impunity. Rather than persecuting perpetrators, Israeli authorities do not intervene, react with restrictive actions towards Palestinians, or even support settlers by partaking in violent acts.

The Israeli authorities started demolishing houses in Um Al-Khair in 2007. In the subsequent years of 2008, 2011, 2012, 2013, and 2014, demolitions continued, often without prior warning. In 2016, the Israeli Civil Administration visited the village several times, declaring that it had new demolition orders. Appealing to the Israeli High Court, if successful, solely delays the date of the demolition. In September 2016, GICJ received a message from Tariq, who described the recent developments in his village: “We faced three demolitions in less than four months. A new settler organization, called Regavim, appeared in the region and pressured the civil administration to demolish our homes. They are responsible for the last two demolitions in my village.” Just before the Israeli army demolished the village on 9 August, the border police arrested 67 years old uncle and leader of the community Suliman Eid Yammen AlHathaleen, took him to a nearby army camp, and beat him severely. Afterwards, they dropped him off on a highway near Um Al-Khair. Walking towards his home, he was soon struck by the sight of his village lying in ruins. Tariq continued: “Nobody can work in our village to rebuild homes right now because Regavim are still watching us all the time.” As a consequence, the villagers had to sleep without a roof over their heads and suffered under a constant fear of further incursions.

In October, we received the following update:

“Since the last demolition, the situation has deteriorated. This time, we can’t rebuild anything because the army, the settlers, and Regavim, constantly watch us to see whether we are rebuilding. The people have been homeless since that time.”

This resulted in severe psychological harm, especially among children:

“The children are terrified and they start crying and screaming whenever they see the army enter the village. I hope everything changes soon and we can rebuild before winter.”

At the onset of winter in November and the coldest months approaching, Tariq had to inform GICJ that the village had been subjected to the tenth demolition:

“We got a demolition last week and demolition orders this week. And Regavim filmed the village twice two weeks ago. I think they will come soon to demolish a group of houses.”

Hardship was exacerbated by constant settler and military presence and regular acts of violence. Tariq expressed:

“We are really suffering from this situation. We are losing our children. Every time they demolish the children start to act in a strange way. They lose their childhood with every demolition. The women are also harmed when they see their children crying and they can’t do anything about it.”

In December, a further update arrived, revealing that the situation continued to deteriorate in the face of activities by settlers: “Recently, the settlers have started working on a sewage pipe, which is going to pour into our farming land.” Farming is a primary means of livelihood for the village. Tariq, as well as other family members and inhabitants, regularly initiate and participate in protests and direct action against the practices and policies of the occupying Power. Faced with the violent Israeli occupation, they mobilize for nonviolent resistance, solidarity and support among the different village communities. However they are often met with violence by Israeli forces:

“Last Friday my uncle and I went to protest and the army attacked us violently. They beat my uncle and when I started filming, the army called me to come and to delete the videos. Immediately I ran back to my home. Soon afterwards, they came to my village to look for me. When I saw them approaching, I escaped from my village and ran seven kilometers to be safe. However, they kept searching in the village and when they did not find me, they arrested all the youth in my village and took them to the settlement nearby. The youth had to stay there for two hours while the army checked their IDs. In that night I slept outside the village to be in safety.”

By simply trying to document the acts of the occupying forces, Tariq put himself in danger of being arrested. Palestinian civilians are governed by a repressive military regime, whilst domestic civil and criminal law is applied to Israeli settlers illegally present in the OPT.

At the end of December, the village received news from their lawyer, indicating that the demolitions in Um Al-Khair will stop for a period of time. Nonetheless, the Palestinian residents continue to live under a constant threat of displacement. The house demolitions in Um Al-Khair were part of the most extensive demolition campaign in the occupied West Bank in the last seven years, leaving thousands of Palestinians homeless. Neighboring villages such as Susyia, Al-Tuwani, Um-Fakra and Masafer Yatta face the same policies and practices of annexation, as do all Palestinian cities, villages and towns in Area C. Despite the oppression and hardship they are facing, the Palestinians living in Um Al-Khair and surrounding villages keep their hope and carry on with their activism against the occupation. “I think the dreams of my people are very easy”, Tariq said. “We simply want to live in peace. Nothing more, nothing less.” 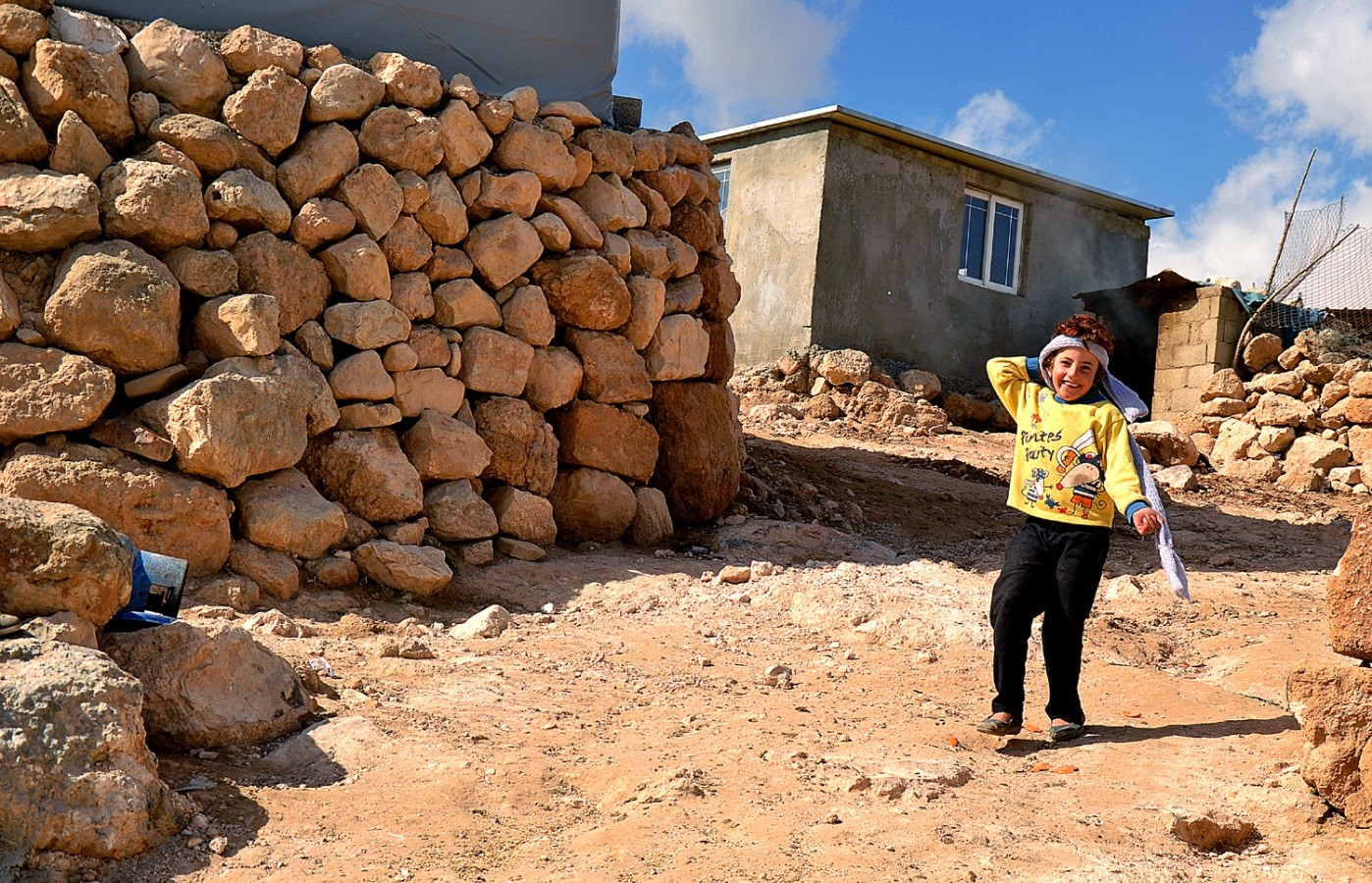 A girl from Halaweh running around with joy, despite the destruction of her village. 6 February 2016. [Photo by Misha Pook]

Three generations of Tariq’s family have been facing displacement, dispossession and hardship. Their nonviolent struggle for justice and peace for the communities in the South Hebron Hills and for all the people of Palestine continues.