GICJ participation at the 56th Session of the Committee on Economic, social and cultural Rights (CESCR)

The Committee on Economic, social and cultural Rights (CESCR) has concluded its 56th session on 9 October 2015 and issued its concluding observations on the report of Iraq.

The Committee expressed its concerns on many issues pertaining to the access and enjoyment by the people of Iraq of their economic, social and cultural rights.

The Committee noted that the Covenant rights are not fully incorporated in the State party’s legal order.

In line with most reports issued by UN experts, special rapporteurs and other bodies,  the Committee expressed its concerns about the absence of institutional guarantee for the independence of the judiciary. Furthermore, the Committee considers that the prevalence of corruption in Iraq adversely impacts the effective enjoyment of Covenant rights by Iraqis. It also noted that resources to key sectors covered by the Covenant notably social protection, health and education were inadequately allocated.

Despite the adoption of policies and programme to tackle the issue of IDP, the Committee note that the majority of them continue to face serious impediment in accessing housing, health services, education and basic social services, and stated that Iraq limited efforts to facilitate the safe and voluntary return of displaced persons to their original place of residence has not yielded meaningful results.

On children rights, the Committee expressed its concerns about the large number of children who have lost their parents and who live in the street, noted that child labour was rising including in hazardous conditions and that no sanction was enforced against those violating child labour provisions. The committee also stressed the insufficient safeguards preventing the recruitment of children by State-backed militias and ISIL.

The prevalence of poverty in Iraq which disproportionately affects children, women, minorities, IDPs and persons living in rural areas is mentioned by the Committee who notes with concern that previous economic growth in the years 2005-2012 did not yield satisfactory results in reducing poverty. The Committee also notes that food insecurity and malnutrition are prevalent, while the shortage of safe drinking water and sanitation facilities increases the incidence of preventable disease such as diarrhoea and cholera.

On the right to health, the Committee considers that the budget allocated to health is unsatisfactory, noting the limited access to basic health services.

On the right to education, the Committee noted the decrease in school enrolment and attendance and the increase in school drop-out and illiteracy rates, especially among girls. It is also concerned about the limited availability of schools, and at the fact that many of them are in poor physical conditions and lack essential facilities.

GICJ statement and report to the Committee

For too many years now the international community has not given due attention to the dire human rights situation in Iraq. The nature of human rights violations in Iraq is systemic and multiple governments and militias share culpability.

Throughout our report, it is made clear that the decades of continued economic and social hardship inflicted upon the Iraqi people in the form of comprehensive sanctions, illegal invasion and occupation, further exacerbated by widespread political corruption and infighting, have led to the further deterioration of human rights standards in the country.

Since July 2015, millions of Iraqi citizens have joined in protest against the government’s violations of their economic, social and cultural rights. The demonstrators protest against the lack of basic services, including access to water, food, electricity and a functioning health system as well as corruption which affects every aspect of their economic, social and cultural development.

These basic needs continue to remain unmet despite Iraq’s procurement of over 700 billion US dollars from oil revenues between 2003 and 2014.  It is well known that rampant corruption and a lack of political will have hindered any improvement to the human rights situation and the provision of basic services in Iraq.

As our report highlights, Iraq’s health system remains a ghost of its former self. Whilst Iraq boasted the best health system in the region prior to 1990, today cholera continues to claim lives as Iraq’s shattered and looted health system lies in dire need of equipment and professionals. On Sunday 27th September, the Ministry of Health in Iraq said that it registered 118 new cases of cholera in 3 southern governorates bringing the total now up to 502. The councils of these governorates however, say that real figures are much higher than official ones. The fragile state of Iraq’s health system has increased the rates of infant mortality and complications during birth. One in four delivering women faces serious complications during pregnancy, and approximately one in 15 adult female deaths can be attributed to maternal mortality.  Health problems do not end after delivery, given the ongoing food insecurity, it is estimated that 22% of children under the age of 5 are chronically malnourished and 5% suffer from wasting.

Corruption, discrimination and sectarian agenda restrain the practice of the legal system and impunity for violators of human rights abuse is rife. Yet, even as the assassinations of several leading demonstrators and numerous cases of intimidation, threats and violence against protestors are documented daily, the dire human rights situation continues to force protestors to take to the streets.

Those responsible for this vicious cycle of gross violations have been allowed to evade accountability and justice for far too long.  During each session of the Human Rights Council, the delegation of the Iraqi government outlines the new efforts and initiatives it has undertaken to advance the protection and realization of economic, social and cultural rights and reaffirms its commitment to cooperate fully with United Nations bodies. Similarly, this will be the case with your esteemed Committee. However, such promises grossly misrepresent the situation in the country and constitute blatant attempts to mislead the international community.

Education has suffered immensely since 2003, as a result of the destruction of the institutions, the exodus of qualified teachers and governmental neglect and corruption. Not only have universities and higher education facilities been bombed, burned and raided as a consequence of military operations but they have also been overrun and occupied for military and militia purposes. Standards of education in Iraq have plummeted since 2003. Though Iraq once boasted one of the finest education systems in the region prior to 1990, obtaining a UNESCO prize for having succeeded in eradicating illiteracy in 1982, illiteracy has risen dramatically in recent years and it is estimated that around 20% of the population in Iraq is illiterate. Women are particularly affected and especially in rural areas, where close to 50% of women aged between 15 and 24 years are illiterate compared to 28-30% of women living in urban and major cities.  The government has failed to genuinely use the support of the UN agencies to rebuild the education system in any way.

Prior to the occupation, women in Iraq had made important advances in terms of their rights compared to most countries in the region. In 1980, Iraqi women accounted for 46% of all teachers, 29% of all physicians, 46% of all dentists and 70% of all pharmacists.  Following decades of sanctions and war, it is now the case that just 18% of women are employed or looking for employment, and they take up only 7% of employment in non-agricultural sectors.

The deteriorating security situation, the displacement of families, the social stigma of being a single mother and the exceptionally low employment rates of women have contributed to the increased number of women living below the poverty line. In 2013, only 2% of all employees in the private sector were women and 10% of households were headed by females who were widowed, divorced, separated, or caring for sick spouses.   Additionally, approximately 33% of women have received no humanitarian assistance since 2003.

During the occupation, according to Article 49.4 of the Iraqi Constitution not less than one-quarter of the members of the Council of Representatives should be women. However, this political representation is largely considered to be symbolic, and the quota established to improve the image of the occupation. Former Iraqi Prime Minister Nouri al-Maliki did not appoint a single woman to a senior cabinet position and there are no women-led ministries. The Ministry of Women's Affairs, which was poorly-funded and mostly ceremonial, was the lone ministry headed by a woman.  This ministry was dissolved by Prime Minister Haider Al-Abadi on 15 August 2015.

Many Iraqi women have lost their husbands as a result of armed conflict, generalized violence, and displacement. The resulting financial hardship and instability that followed the invasion has led to an environment where young women and children have become much more vulnerable to trafficking.  Corruption and criminal networks facilitate this practice. Whilst traffickers go unprosecuted without a comprehensive programme in place to tackle the issue, trafficked victims often end up in jail, prosecuted for crimes committed as a trafficked person.  Alarmingly, women and girls have been known to request to remain in detention centres fearful of their families.  The Government of Iraq does not fully comply with the minimum standards for the elimination of trafficking. The parliament passed a counter-trafficking law in April 2012, but authorities have done little to enforce it. 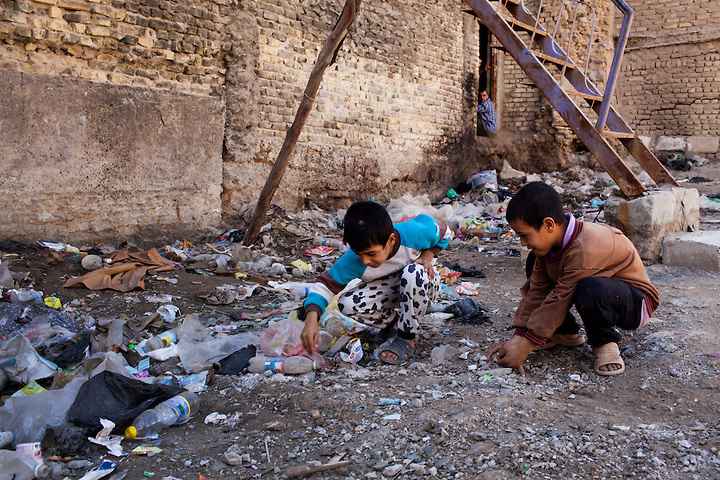 Iraqi children are deprived of both a childhood and an adequate education. Of increasing concern is that not only are children caught in the crossfire of the violence around them but they are also being directly enlisted to participate. Minors are being pulled into Iraq's war as the military, Kurdish fighters and militias battle to take back territory from ISIS militants.  Children have been encouraged to spend their summers undertaking military training in camps across Iraq run by the militia group, al-Hashd al-Sha’bi (the Popular Mobilization).

Nearly half of Iraq’s population is less than 19 years old. Statistics for youth employment and participation in cultural activities illustrate the bleak situation. Iraq has taken a backward step since 1990 as youth unemployment has risen from 7% in 1990, to 30%, which is double the national average of 15% and far from the target of 4% in 2015. 70% of youth in Iraq state they have no interest in cultural and art activities, 87% do not attend youth clubs, 68% do not practice sports and 37% do not have any hobbies.

The basic economic, social and cultural needs of Iraqis remain unmet as a result of poor services; huge internal displacement of citizens; the destruction of facilities, infrastructure and harvests in conflict; market price fluctuations and rampant corruption. For real rights progress, the millions of protestors call for a new political system, based on a new constitution, free from sectarian quotas and the interference of religious leaders. Furthermore, they call for accountability for all those responsible for the rampant governmental corruption, which impedes absolutely the realization of their economic, social and cultural development.

When there is no domestic political will to address this human rights situation, these citizens turn to the international community for an end to their suffering. The lack of criticism for the abusive practices of this government towards its people and the lack of sincerity with which these violations have been addressed mean that the people of Iraq continue to suffer without change. For these reasons we ask this Committee to truly scrutinize Iraq’s reports and statements; demand that the delegation submit clear and transparent information about the real situation; and be answerable as to why they have failed to make any progress in the areas of economic, social and cultural rights despite the country’s wealth and support of UN bodies.

Read online or download the full report submitted by GICJ.